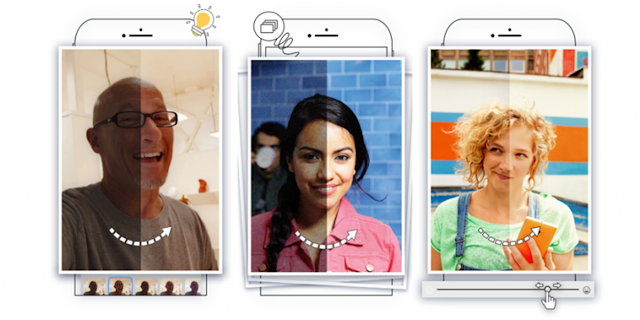 Released just last
December and already among the best apps for iOS with
over a million downloads, the popular Microsoft Selfie app is
introducing a slew of new features and multilingual support.
Microsoft Selfie is a
photo enhancement application available on iOS, web and WeChat that is able to
intelligently consider an array of variables such as age, gender, skin tone,
lighting and more, to help users transform average photos into enhanced, ideal
portraits within seconds.
Microsoft’s
Beijing-based team behind the app has been paying close attention to user
feedback, and the latest update adds new features including: easier social
sharing, an updated user interface, selfie stick compatibility and a timer to
capture the perfect selfie. The app is now also available in 31 languages, so
selfie snappers across Asia-Pacific may navigate their photo enhancement
options in Chinese (Traditional), Indonesian, Japanese, Korean, Malay, Thai,
Vietnamese, or Hindi.
While the app and the
updates might seem rather mundane, rest assured: there is serious science
behind the selfie.
Researchers from the
Visual Computing group utilized a bevy of computer vision technologies ranging
from face detection to visual recognition to super charge the experience,
contributing to the app’s meteoric rise in popularity.
The app leverages
Microsoft Research’s Face technologies to
help determine the age, gender and skin tone of a person and avoid the
exaggerated refinements that limit the effectiveness of other selfie apps.
These technologies can be utilized by developers through Microsoft Cognitive Services, which also powers other
experiences like How-Old.net, TwinsOrNot.net and MyMoustache.net.
Additionally, a new
portrait enhancement technique called Digital Face Clean intelligently removes
undesired features like wrinkles and baggy eyelids, while preserving desired
characteristics like hair, mustaches, tattoos and accessories.
The app’s outstanding
noise reduction feature uses “Burst Images De-noising”, a technique that
intelligently judges light conditions, automatically enables burst shots and
leverages multiple frames for better de-noising, thus improving image quality.
This technology has also been used in the popular Blink app.
Microsoft Selfie’s
Auto Exposure feature, which can automatically detect a backlit photo and
compensate the light level, is also used in the Office Lens app. Combined
with dehaze technology, it greatly improves photo clarity.
But it can do more
than just enhance selfies.
“Microsoft Selfie can
produce professional-looking photos,” said Peggy Dai, program manager of the
incubation team.
Existing apps either
produce unnatural-looking results, fail in dim lighting conditions or require
excessive user interaction, she added. But Microsoft Selfie is designed to be
natural, intelligent and easy to use.
“Within two weeks of
launch, our app had already achieved more than half a million downloads, which
was a lovely surprise. Together with the research team, we will continue to
introduce more innovative features, and expand availability on more platforms,”
Dai said, adding that the team receives extensive feedback from users.

Embracing Cloud in the Cognitive Era