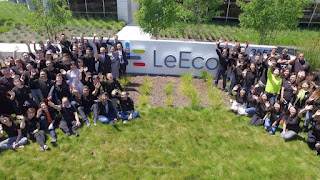 Chinese Consul General in San Francisco and San Jose Mayor Join LeEco to Celebrate the Unveiling of the New Facility, Which Can Support up to 800 New Workers
SAN JOSE, Calif, April 29, 2016 – — LeEco, a leading global internet company, yesterday held a ribbon-cutting ceremony and press conference to formally establish its new, 80,000 square foot North American headquarters in San Jose, a facility that can support as many as 800 new employees. The headquarters will also be the future home of LeEco’s autonomous driving research center, the LeFuture AI Institute.
“Silicon Valley is critically important to our global growth strategy,” said LeEco Chairman and CEO Yueting Jia. “Silicon Valley is known for its unique talent and culture of innovation and inspiration, which aligns perfectly with LeEco’s mission to bring extraordinary experiences to people everywhere. We’re looking forward to sharing our vision of one connected ecosystem with U.S. consumers – where users can create a seamless, premium connected experience across all of our lifestyle products.”
“LeEco is an innovative, global company that creates excellent experiences for its customers,” said Luo Linquan, Chinese Consul General in San Francisco. “On behalf of the Chinese Consulate-General in San Francisco, I would like to extend a warm welcome and congratulate LeEco on their growth and expansion with their new North America headquarters.”
“I am grateful to LeEco for choosing to locate its new headquarters in North San Jose, further cementing San Jose’s role as a world leader in innovation,” said Mayor Sam Liccardo. “On behalf of the City of San Jose, I congratulate LeEco on the opening of its new headquarters, where its hundreds of employees will continue to drive innovation for decades to come.”
LeEco has made major headlines recently, starting with its global announcement event on April 20 in Beijing, which was broadcast through Facebook Live, cementing LeEco as the first company to use the API for a large-scale launch. The news included a peek at the stunning and disruptively priced second-generation smartphones, an all-new 4th-generation SuperTV, the LeEco VR headset and its autonomous LeSEE electric vehicle concept car.
LeSEE was showcased along with the second generation of Aston Martin’s Rapide S at the Beijing Auto Show on April 25. Additionally, LeEco announced that it will be partnering with Faraday Future to fund a world-class autonomous driving research center in Silicon Valley.
The company has also attracted top-shelf talent across its ecosystem businesses and recently announced the strategic hires of Smart Device (Mobile)Chief Revenue Officer and SVP/Head of Corporate Administration of North America. Both previously held executive positions at Samsung.
Earlier this year, at the Consumer Electronics Show in Las Vegas, LeEco announced its ambitious plans to rapidly expand its global footprint by entering India and the U.S. market with its ecosystem of technology and content offerings.