If you have a very high expectation of your home computer and require both speed storage capacity, then the new Samsung SSD will make you wet yourself. The PM1633a that was recently announced by Samsung can hold a whopping 16TB of data, at the same time retaining a 2.5″ SSD form factor. 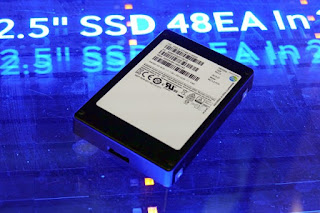 More specifically, the actual storage space that the user will get is 15.36TB after formatting. Samsung has broke the records for the world’s largest capacity SSD with the PM1633a.

This SSD utilizes Samsung’s new 256Gbit (32GB) NAND flash. If you do the math, this SSD will require at least 500 pieces of such NAND flash to make it reach such high storage capacity. In fact, this is really the case. The all these NAND flash in the SSD is stacked in 48 layers. Because of such a design, the PM1633a is also twice the height of your usual 2.5 inch SSD. 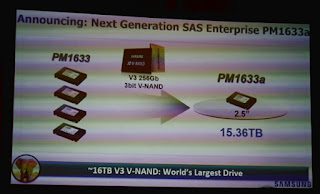 Samsung has yet to announce the suggested retail price and timeline of the Pm1633a. Because of the expected exorbitant pricetag of this SSD, end user consumers are not likely to get their hands on this storage device. On the other hand, enterprises who work on servers and workstations that require such speed and storage area will probably purchase this SSD as a good investment for the benefits they get. Samsung said that such SSD will be great storage disk for servers, and 48 of such disks can give a server 768TB of storage space, making it a decent computational powerhouse.

It is expected that the PM1633a will cost for more 8000USD. As for comparison, a 2TB 2.5inch SSD costs about 900USD. In fact, the PM1633a is much more affordable than what we have in the market right now.