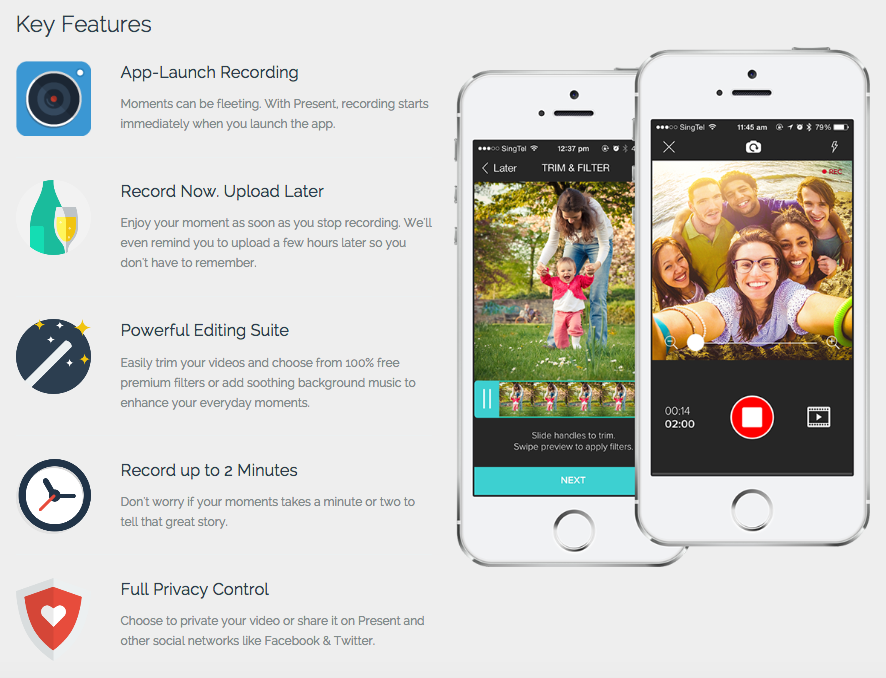 Singapore,
23 April 2015—Singapore-based Present app has just raised half a million in SGD
from prominent investors such as James Teo, Executive Chairman of Eastgate
Technology, and Bobby Lim, Executive Director of Tai Sin Electric, among
others. The funding will go towards building a strong team to enhance existing
features, as well as developing new ones, in preparation for Present app’s
launch later this year.
Present app is the first social video diary
that empowers users to crystallize their moments. The app acts as a memory
bank, letting users crystallize their moments with features that enhance the
user’s ability to record without any interruption, and preserving the moment’s
authenticity. Some features include:
·
App-launch recording allows users to
seamlessly capture fleeting moments in their lives, without interrupting the
moments as they happen
·
Users can capture moments as
they happen and not feel rushed to edit and upload them immediately with the upload-later function
·
All videos that are recorded
with the app are saved to the Present cloud,
and users can choose which moments to share publically to their followers, and
which moments to keep private just for themselves
·
The Nearby feature extends the app’s memory bank functions and
automatically retrieves past videos recorded in the vicinity of the user’s
current location, acting as an easy extension to the user’s own memories.
This round of funding will be used for
recruiting passionate talents for their development team, in order to build
upon existing functions, as well as developing and testing to introduce new
features.
“It’s essential to me to find a team that
understands and shares my passion to fulfill Present app’s vision to bring an effortless
and seamless way to crystallize moments that are precious to us—moments that we
want to conserve in their purest form. All the R&D that we are currently
doing will go towards optimizing the app towards this end goal,” explained
Peter.
“Beyond the company potential that I see in
Present app, I also admire the people and vision that have come together to
create this app,” noted James Teo. “I believe that Peter has laid down a
fantastic foundation for the app to take advantage of our natural desire to
preserve and treasure all the unique memories we experience, and to crystallize
something that is fleeting.”
The idea for Present was born from Peter’s many
travels across continents through his social enterprise, which encouraged
children in devastated areas through art. “I realized I had begun to collect a
swathe of memories that would happen in these pockets of time that became
indeed very special to me, and that I felt compelled to store all these stories
into a memory bank,” Peter explains. Through its ability to capture genuine,
spontaneous moments without interruption, Present app really has become a
memory bank for its users to store the moments that they want to cherish
forever.
Presently is currently in open public beta
on iOS.
For more information, please visit
http://presentapp.co.