Sony Unveils Its Latest Array of Innovations at 2015 International CES

(SINGAPORE, 6 January 2015) – Sony Corporation is unveiling its new
product lineup scheduled for release in 2015 at the “2015 International
Consumer Electronics Show (CES)” held in Las Vegas, Nevada beginning on Tuesday,
Jan. 6, 2015.
In line
with its philosophy of “inspiring and fulfilling the curiosity of people around
the world and moving them emotionally”, Sony’s booth will feature new products
and prototypes highlighting Sony’s 4K Ultra High-Definition technology,
High-Resolution Audio (“Hi-Res”), and SmartWear.
Sony is
taking the 4K visual and shooting experience to a whole new level with a wide
range of 4K compatible products. A total of 11 new 4K BRAVIA™ LCD TVs will be
brought to market across three series, boasting even more breathtaking picture
quality than before with Sony’s own innovative 4K Processor X1. This new line of
BRAVIA™ sets includes the world’s thinnest series of TVs (approximately 4.9 mm at their thinnest point) as well as the
world’s first series with Hi-Res compatible speakers.
In
addition, Sony is equipping a wide range of 4K and Full HD sets with Google’s latest
Android™ operating system to make cross-functionality between TV and mobile richer
than ever. Furthermore, Sony’s One-Flick Entertainment interface provides a
unique user experience with intuitive flick-operation via touchpad remote to
access a library of content just a flick away. The combination of these two
provides consumers with a whole new way of interacting with their TVs and
accessing content, services, and apps.
Sony is
also bringing a whole new level of 4K technology to its digital imaging line,
starting with its new Action Cam model capable of shooting 4K video – a new
wearable style of capturing footage as crisp, clear, and real as the moment
itself. Sony will also showcase its newest 4K Handycam® camcorder – around 30
per cent smaller and 20 per cent lighter than the current model and equipped with Sony’s proprietary Balanced Optical SteadyShot™ technology.
In the
realm of audio, Sony’s wide range of new Hi-Res compatible products offers
superior listening from inside the home to on-the-go. Sony is introducing a
total of ten new devices,
including a Hi-Res compatible top-of-the-line Walkman®, headphones, wireless
speakers, home theater systems, and multi-channel integrated amplifiers. With
Sony’s newly developed LDAC™ codec technology, which enables the transmission
of approximately three times the amount of audio data as is currently possible
with existing technologies,
users can now listen to higher quality music wirelessly over Bluetooth® than
ever before. Sony’s exhibit will also feature the power of SongPal Link™, a new
functionality available in Sony’s new products that enables simultaneous audio playback
through multiple connected devices.
A demonstration of this at CES will transport attendees to a new musical space
that transcends the physical confines of the venue.
Sony is also
pushing forward with the creation of SmartWear devices that offer new experiences
and styles of living. At last year’s 2014 International CES exhibition, Sony
presented an innovative line of conceptual SmartWear products that log life
experiences by recording actions of the user throughout the day. The
information stored in the Lifelog app enables the user to identify and improve
upon daily patterns, making the SmartWear device a powerful “life tool” that
has the potential to enrich one’s life. In 2015, Sony will further strengthen
its ties with fashion and lifestyle brands to deliver new modes of
device-wearing that complement the conventional wristband-style. From headsets
to eyewear, Sony’s SmartWear line will take on a variety of shapes and forms. With
a fuller offering of Sony and third-party services and apps, these devices will
boast a variety of potential applications, from everyday communication to
improved tracking and recording functionality for running, golf, and fitness
activities.
In advance
of the opening of its exhibit at CES, Sony will hold a press conference on Monday,
Jan. 5. Sony Corporation President and CEO Kazuo Hirai and Sony Electronics
(SEL) President and COO Michael Fasulo will take the stage and unveil the
above-mentioned products set for release this year. A live stream of the
conference will be available at the following URL: www.ustream.tv/sony
Main
Products and Prototypes Being Exhibited 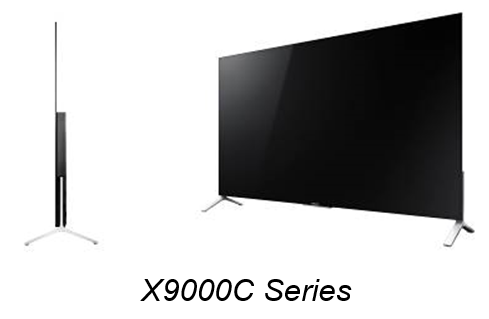 visual experience – through stunning
clarity, a wide color gamut, high luminance, and high contrast – than ever
before with the adoption of its own, innovative 4K Processor X1. Sony will be
exhibiting the X9000C series, featuring a new “Floating Style” design concept
that boasts the world’s thinnest1 build (approximately 4.9 mm at its
thinnest point). Sony will also display its X9300C series, the world’s first2
TV sets that support Hi-Res audio, are equipped with Hi-Res compatible
speakers, and boast Sony’s proprietary DSEE HXTM technology that upscales
compressed audio from broadcast TV and other sources to near-Hi-Res levels. 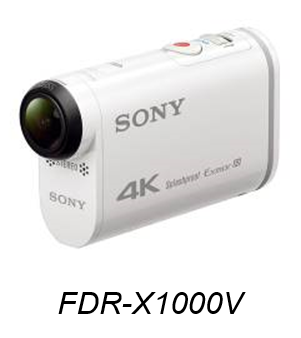 The FDR-X1000V, the first 4K compatible Action Cam, will support high definition, high bitrate video recording at
4K/30p (100 Mbps). It comes equipped with advanced SteadyShot technology and is the first of its line to feature wind noise reduction. The new Action
Cam makes capturing 4K footage as crisp, clear, and real as the moment itself.
Sony’s new
FDR-AX33 4K8 Handycam camcorder is around 30 per cent smaller and 20
per cent lighter than the current model3 and is the first 4K
Handycam to come equipped with Balanced Optical SteadyShot technology capable
of suppressing blur during all modes of shooting, from wide-angle to telephoto.
With this automatic image stabilisation, high-resolution 4K video recording
becomes easier for consumers than ever before.
High-Resolution Audio
Sony
offers superior listening experiences from inside the home to on-the-go with
its diverse range of audio devices. Its new products allow users to play higher
quality audio wirelessly over Bluetooth than ever before and to, through
SongPal Link™, simultaneously play music over multiple connected devices6. 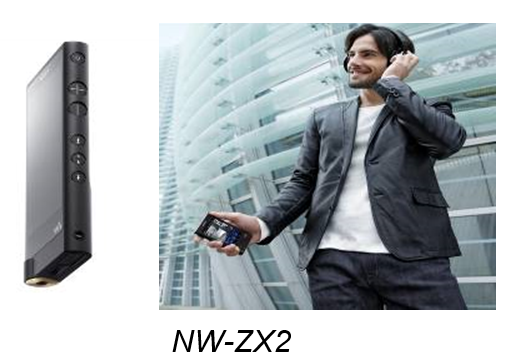 The NW-ZX2 Hi-Res compatible Walkman® is
a new high-end model in the ZX series, following in the success of the Walkman®
NW-ZX1 flagship model released in the fall of 2013. It takes the audio quality
of the ZX1 to a higher level, featuring a new rigid chassis design to achieve
an even higher-quality sound. The new model features up to 33 hours of Hi-Res
playback (at 192 kHz/24 bit) and ultra-high quality playback over a Bluetooth
connection when the device is paired with Sony’s new MDR-1ABT Headphones.
Sony will
continue to expand its Hi-Res compatible lineup of products for the home,
including the SRS-X99 and SRS-X88 Wireless Speakers, the HT-ST9, HT-NT3, and
HT-XT3 Home Theater Systems, and the STR-DN1060 and STR-DN860 Multi-Channel
Integrated Amplifier. These will all support wireless operation via SongPal
Link™, thereby enabling simultaneous playback through multiple connected
devices, as well as playback of multiple songs on devices throughout separate
rooms. Finally, Sony is also exhibiting a prototype Hi-Res car audio player
during CES.
SmartWear 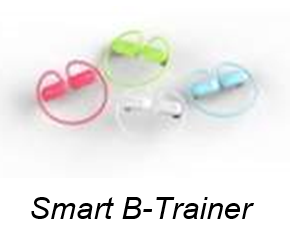 Among its SmartWear prototypes, Sony will
introduce the Smart B-Trainer, an all-in-one, lightweight, headset-style device
made for runners and equipped with essential running sensors and music playback
capabilities. This device encourages a sustainable running routine,
facilitating progress by automatically selecting songs with tempos to match the
user’s heart rate and offering audio guidance for a variety of training programs.
The Sony
booth will also feature the first ever public exhibition of the SmartEyeglass Attach!
concept model for sports use, an attachable Single Lens Display Module that was
announced in December 2014. This high-resolution eyewear module leverages
Sony’s unique OLED technology and can be integrated into the eyewear products
of cooperating third parties, enhancing users’ experiences by providing them
with essential information through a high-resolution color display. The module
is perfectly suited for both indoor and outdoor use, and it joins the
SmartEyeglass transparent lens eyewear – designed for developers and targeted
for release later this fiscal year – as early Sony entries into the world of
wearable smart devices. Sony will continue to expand its SmartWear line with
new concepts and innovative forms to match their functions.
Life Space UX
At the
2014 International CES, Sony introduced its new Life Space UX concept,
reimagining how to experience and make the most of living spaces. Sony is
moving forward with the commercialisation of a number of Life Space UX
prototypes, following the line’s inaugural product – the 4K Ultra Short Throw
Projector. This projector, when placed at the foot of a wall, transforms the
entire wall into a life-size window into another world with an expansive 147 inch
image that boasts four times the clarity of Full HD. It was released in the
United States in September of last year. 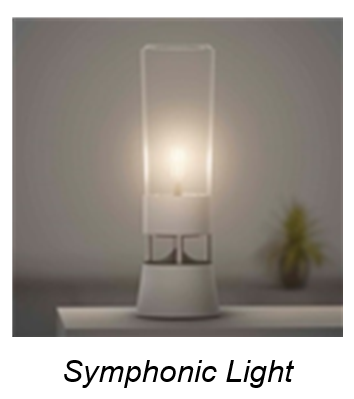 A number of other innovative Life Space
UX products will be brought to market this year, including the LED Bulb Speaker
– a bulb-shaped speaker that doubles as a functional light bulb. It blends right
into any living space and enlivens it with music via a wireless connection.
Also planned for release is the Portable Ultra Short Throw Projector, a compact
cube-shaped projector measuring approximately 10 cm per side. It is capable of throwing
up to a 50 inch image, allowing the user to watch a movie wherever the unit is set
up, whether on the kitchen table or by the bathtub. Finally, Sony will be
exhibiting, for the first time, three models of its Symphonic Light, yet
another type of audio-emitting light fixture that can fill a room with crystal
clear sound. With these and other unique products, Sony will continue to create
and offer rich new modes of living through its expanding vision for Life Space
UX.