– One of the top iOS and Android games launched in Singapore
– LINE introduces new TVC on Channel U, Channel 5, MTV, TLC, etc. until October 19

Singapore, October 7, 2014 – LINE, the world’s leading mobile platform with over 490 million users worldwide, is proud to introduce a new television commercial for its latest game, LINE Let’s Get Rich. The new TVC will be aired on Channel U, Channel 5, MTV, TLC, History, National Geographic, Discovery and Starworld and will run until October 19, 2014. Since its launch on July 8 2014, LINE Let’s Get Rich, a real-time competition game where each round is unpredictable, has been climbing up the iOS (no.18) and Google Play (no. 22) charts to become one of the most popular new games in Singapore. 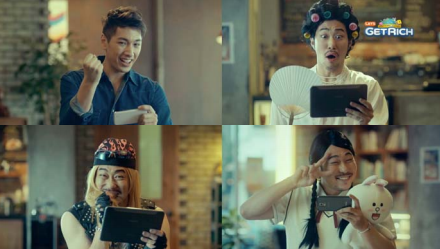 Inspired by the classic board game ‘Monopoly’, LINE Let’s Get Rich is an online board game featuring a gameplay of 4 players with a simple objective—players invest in real estate around the world and compete to get the highest amount of total capital. This real-time competition allows players to compete or cooperate with friends and family they are connected to through LINE.

There are three ways that players can win the game. A “Triple Monopoly” occurs if a player achieves three “Color Monopolies” by owning all the properties of three different colors. A “Line Monopoly” will result in victory if a player owns all the properties in a single row. Finally, a player can win through a “Tourism Monopoly” if they manage to acquire all the tourist locations. The game will also be determined if any players run out of resources during the game, or until turns or time is over, with the player rankings being decided by the total amount of resources owned by each player.

A variety of modes offer single play as well as multiplayer competitive modes, and users can play against their LINE friends as well as in-game friends, competing individually or in 2-on-2 teams.

“LINE Let’s Get Rich has a universal appeal due to its real-time competition game play and its ability to create special and fun bonding moments among families and friends. The response from Singaporean players thus far has been encouraging since they can enjoy the old board game they used to play back in their childhood on mobile now. We hope to introduce other Singaporeans to this exciting game with the launch of the new television commercial,” said Mr. Simeon Cho, General Manager of LINE Business Development Division, LINE PLUS Corporation.

3 Life lessons you can learn from LINE's latest and most popular game, Let's Get Rich!