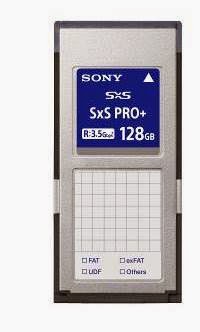 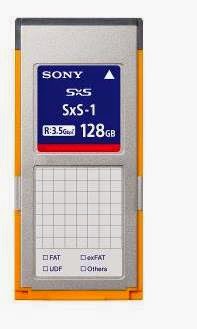 (SINGAPORE, 12 September 2014) – Meet the new and improved SxS series memory cards from Sony. A must-have for professional or semi-professional photographers and videographers, the new SxS PRO+ and SxS-1 offer an unprecedented ultra-high transfer speed to enable users to work more effectively.
Thanks to the advanced interface of PCI Express Generation 2 and a newly developed intelligent controller,  the new SXS PRO+ delivers transfer speeds of 3.5Gbps(440MB/s)1 (read) and 2.8Gbps(350MB/s)1 (write), a much accelerated speed compared to its highly-rated predecessor launched in 2012. Separately, the SxS-1 also has an exceptional transfer speed of
3.5Gbps (440MB/s, read), giving it a high boost in speed.
The new SxS PRO+ and SxS-1’s higher transfer speed also offers a high-speed ingest solution and boosts workflow efficiency when used with the new SxS Reader Writer (SBAC-US30.UT100) and PSZ SSD series[2].
When used in tandem, this powerful combination dramatically reduces transfer times even for large, data-intensive 4K video files. For example, 120GB of video files recorded on XAVC 4K 60p can be transferred to SSD for backup inapproximately five and a half minutes[3] compared to equivalent transfers made by previous SxS memory cards and PSZ HDD series which would take approximately 17 and a half minutes[4].
In addition to its outstanding transfer speeds, the new SxS series is also highly reliable. It features data-error correction, wear-leveling (data-defect minimising) and data refreshing functions for secure data recording. It also has several manufacturing control functions to maintain high reliability. On top of that, the new SxS PRO+ and SxS-1 are dust-proof and are highly durable.
A recommended recording media for XDCAM equipment, the new SxS series memory cards are sure to contribute to a super-efficient workflow with a dramatic reduction in data transfer times to less than half, even with huge 4K video files.
It’s been almost a decade since Sony introduced the SxS memory cards successfully to the professional production market – thanks to the strong support of our loyal customers. And with Sony’s technological strength acquired over the years on development of controllers and effective utilisation of flash-memory, the warranty period of SxS memory card will be extended as long as 10 years from the timing of these new models’ introduction. As such, Sony continues to offer the best professional memory cards for users to trust and use over an extended period.
The new SxS PRO+ & SxS-1 memory cards will be available at all Sony Stores and authorised outlets from November 2014 and January 2015 respectively.