ASUS PadFone
mini Now Available in Singapore
Latest 2-in-1 device features
a compact 4-inch smartphone that slots into a sleek 7-inch tablet, a 1.6GHz Intel
Atom Z2560 processor and 8MP PixelMaster camera
Singapore (24 July, 2014) — ASUS today announced the
availability of PadFone mini in
Singapore, a beautiful 4-inch smartphone that transforms
effortlessly into an elegant 7-inch tablet. The PadFone mini fits comfortably in the palm for
an instantly expanded view on a glorious 1280 x 800-pixel display — even better
than HD. Retailing at S$399, the 2-in-1 device will be available in both black
and white colours at all M1 and StarHub stores, ASUS brand stores at Funan IT
Mall, Sim Lim Square and VivoCity, as well as the ASUS Official Online Store
from 26 July onwards. 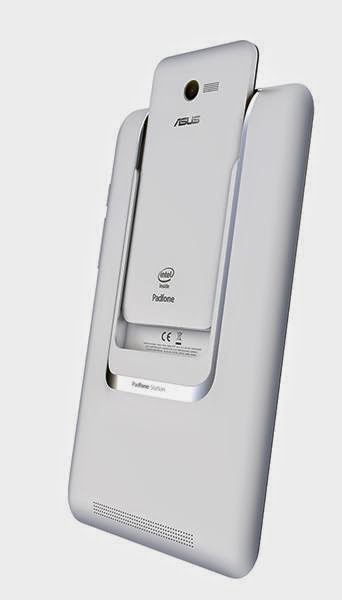 This latest addition to the ASUS PadFone family is powered by an Intel®
Atom™ Z2560 processor, has 8GB of internal
storage and a micro SD card slot that enables storage to be upgraded by up to
64GB. With exclusive ASUS Dynamic Display technology to automatically resize apps
for the different display sizes, a brilliant 8-megapixel (8MP) main camera and
2MP front-facing snapper for selfie shots, the PadFone mini is an outstanding smartphone and also a lightweight
handheld tablet for those who appreciate the convenience of carrying only one
single device that meets their need of both mobile entertainment and voice
capabilities. Furthermore, with dual SIM support, the PadFone mini allows users to have the freedom to maintain two
distinct phone numbers, or separate data and phone lines, without requiring two
handsets.
Combination of Design and Great Power with Long
Battery Life
The PadFone mini is the first 2-in-1 device
to bring together the convenience of a 4-inch smartphone with the power and
versatility of a 7-inch handheld tablet — and that means a tablet that can be
held and used comfortably with just one hand. The PadFone mini saves the hassle of having to carry two
permanently-separated devices and, with a combined weight of just 376g, the PadFone mini is much lighter than many
other smartphone-and-tablet combinations.
Measuring
at 6.3mm at its thinnest edge and weighing at 116g, the PadFone mini is incredibly slim and light. With diamond-cut edges
and a spun-metal finish, the PadFone
mini also looks beautiful. A soft-touch ceramic coating ensures comfort and
great durability.
Both the
4-inch (800 x 480-pixel) and 7-inch (1280 x
800-pixel) displays
use IPS+ (in-plane switching) technology for fantastically clear and sharp
images that also offer great viewing angles. To ensure a seamless experience
when switching between smartphone and tablet modes, the PadFone mini’s exclusive Dynamic Display technology ensures that
apps are correctly and instantly resized for the appropriate screen size. In
addition, the PadFone
mini also comes with the exclusive ASUS ZenUI interface, a newly designed
user interface that comes with simplified icons and five gorgeous
device-matching coloured themes, and an intelligent What’s Next feature that
helps users keep track of their lives.
Powered by Intel Atom Z2560 processor, the PadFone mini is packed with the power
to run a responsive performance for the apps on both the smartphone and tablet
without experiencing any lags. The PadFone
mini also comes with a total battery capacity of 3,270mAh that is
sufficient for a day long usage. The tablet even charges the PadFone
mini smartphone when docked, thus serving as an external portable battery
for the smartphone on-the-go.
Powerful 8MP PixelMaster Camera for Great Low-Light
Shots
The PadFone
mini’s main camera couples an 8MP Sony® BSI (backside-illumination)
sensor and wide-aperture f/2.0 five-element lens with exclusive ASUS
PixelMaster technology to capture digital photographs that more than match those
snapped by many dedicated digital cameras.
One of the most useful feature is the PixelMaster’s
Low-Light Mode, which measures the available light and intelligently adjusts
the pixel size to increase light sensitivity by up to 400%, thus resulting in great
low-lights shots even without the built-in flash. PixelMaster also includes
many other easy-to-use options that further enhance the PadFone mini’s digital photography skills, including HDR (High
Dynamic Range), PanoSphere, Smart Remove and All Smiles — the latter ensuring
that all subjects look their best by intelligently choosing
the best shots from a series of captured facial expressions. PixelMaster also has a Turbo Shot mode that allows users capture multiple
still shots in just one second.
The PadFone mini also
captures smooth high-definition (1080p) video footage — and users even have the
ability to capture still photographs while shooting video.
Availability and
Pricing
The PadFone mini will be available in black
and white colours from 26 July, and will be retailing at S$399 at ASUS brand
stores at Funan IT Mall, Sim Lim Square and VivoCity, as well as the ASUS
Official Online Store at http://store.asus.com/sg/. Both M1 and StarHub will also
be offering the PadFone mini at a
range of mobile price plans.
1    Specifications and product availability are
all subject to change without notice and may differ from country to country.
Actual performance may vary depending on applications, usage, environment and
other factors.