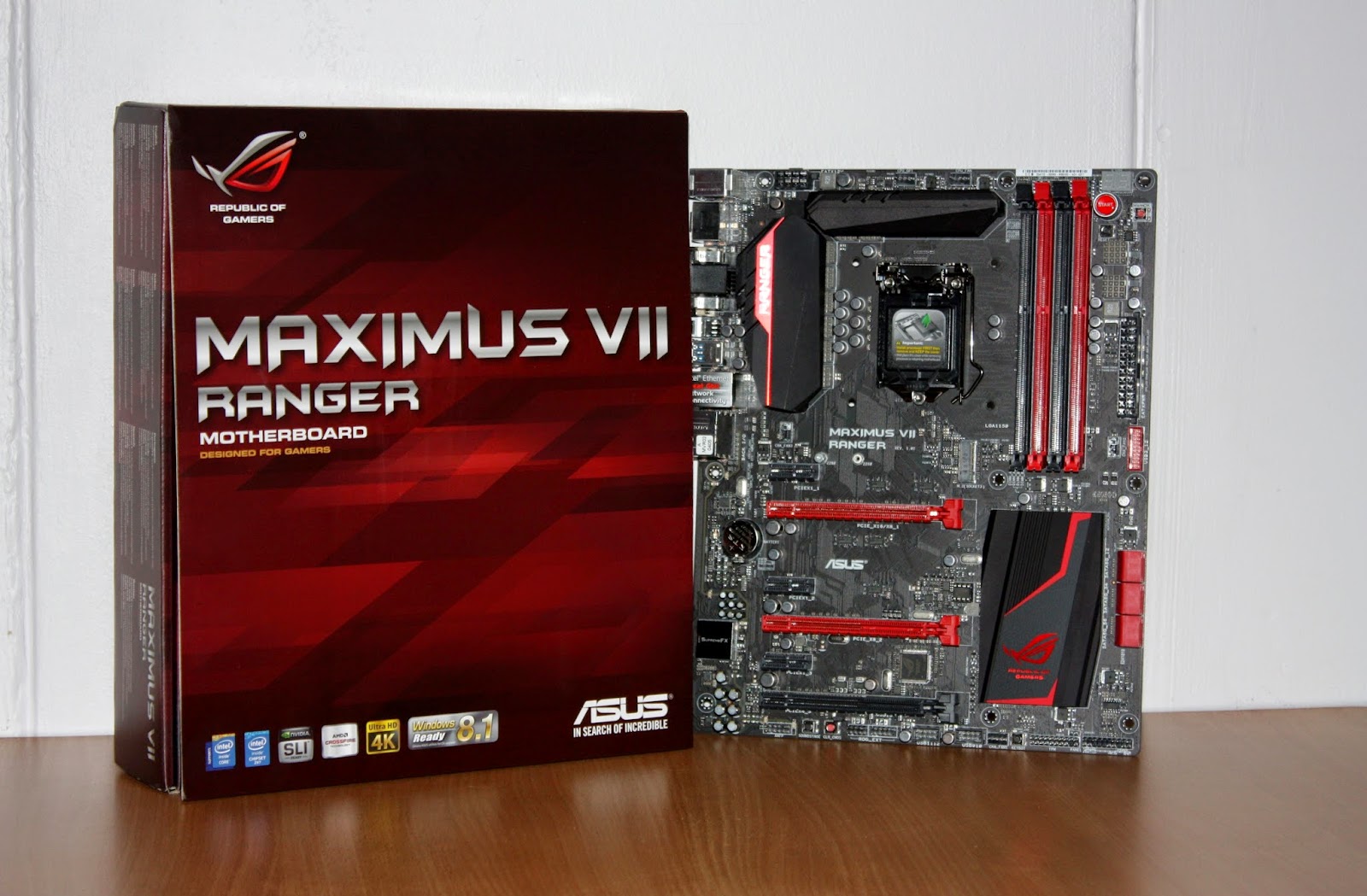 In preparation for the upcoming new enthusiast based flagship processors from Intel, ASUS is the first to release their latest Z97 motherboard lineup. Of course, when mentioning about ASUS, none can forget about their high end Republic of Gamers series which has proved to many as the best made motherboard in the world. 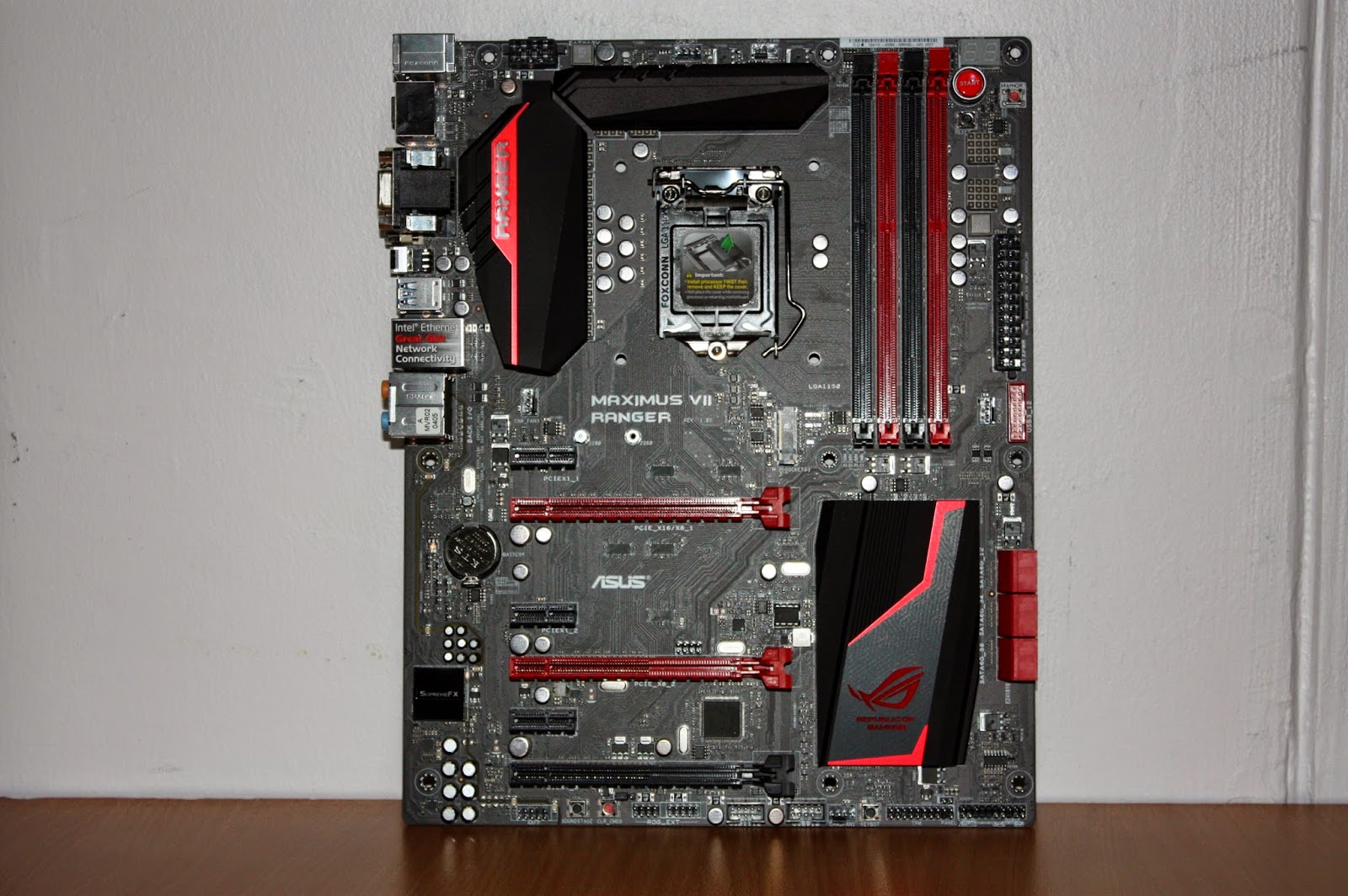 Previously, ASUS ROG released the Maximus VI Hero Z87 motherboard for the Haswell Intel processors and saw the popularity of more budget Republic of Gamers motherboard as compared to higher end models. In response to their strong positive feedback from consumers, ASUS has decided to release another mainstream premium Republic of Gamers motherboard. Named the Maximus VII Ranger, this new Z97 will be the best choice for those seeking for ultimate performance at a reasonable price. 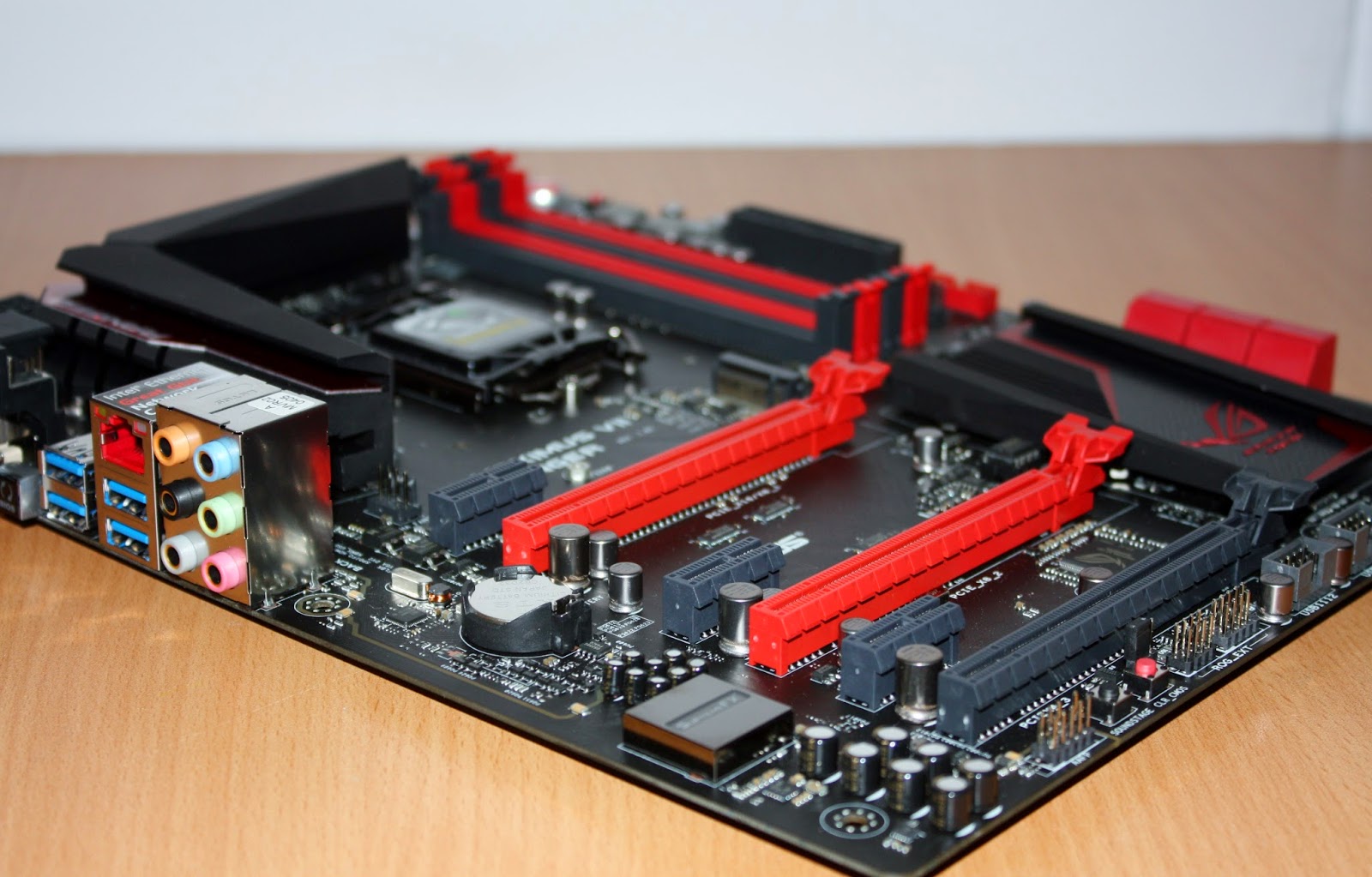 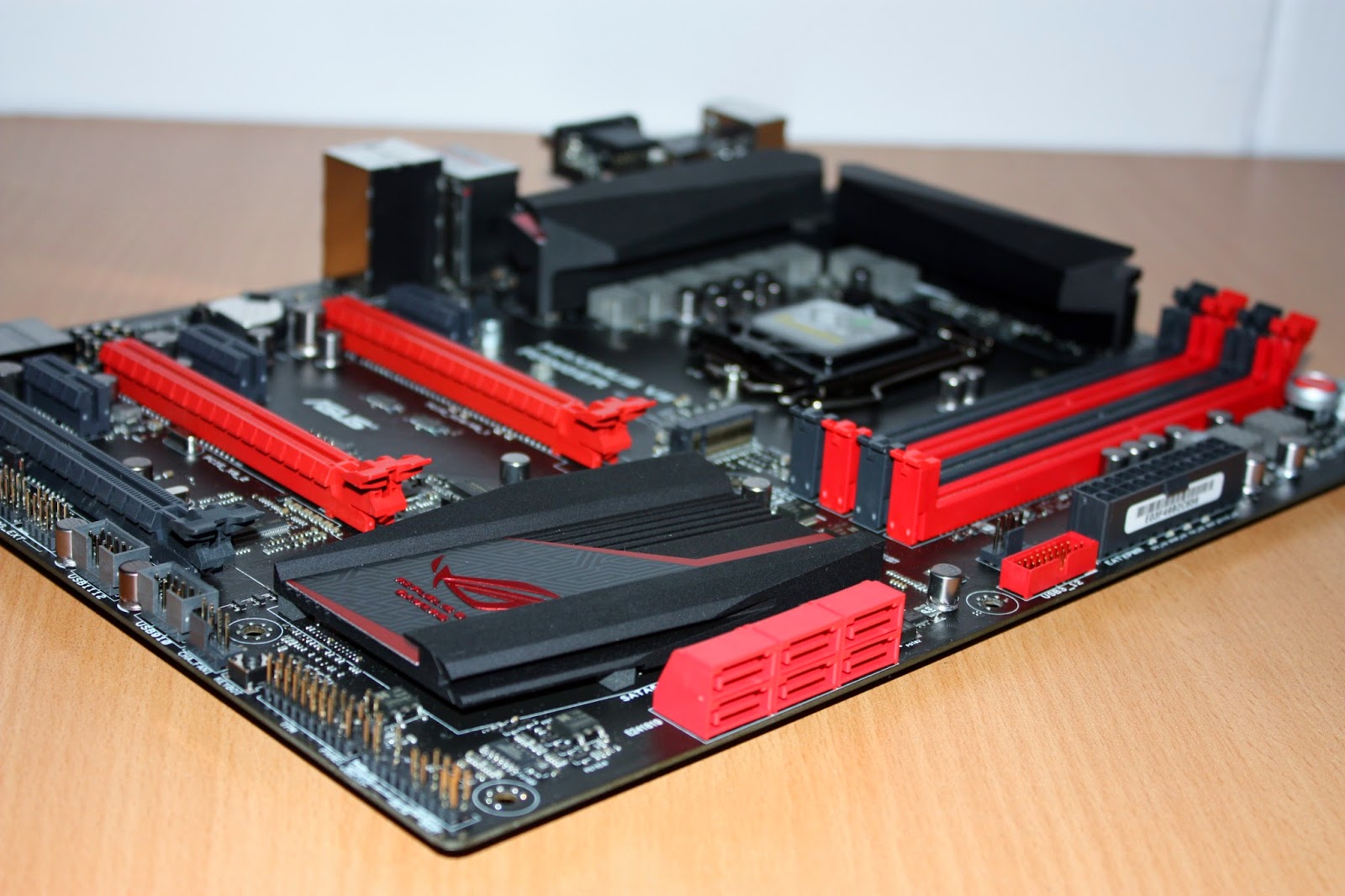 Matt black PCB surface instead of the usual glossy also gives this a new “feel” and touch for overall PC system aesthetics. 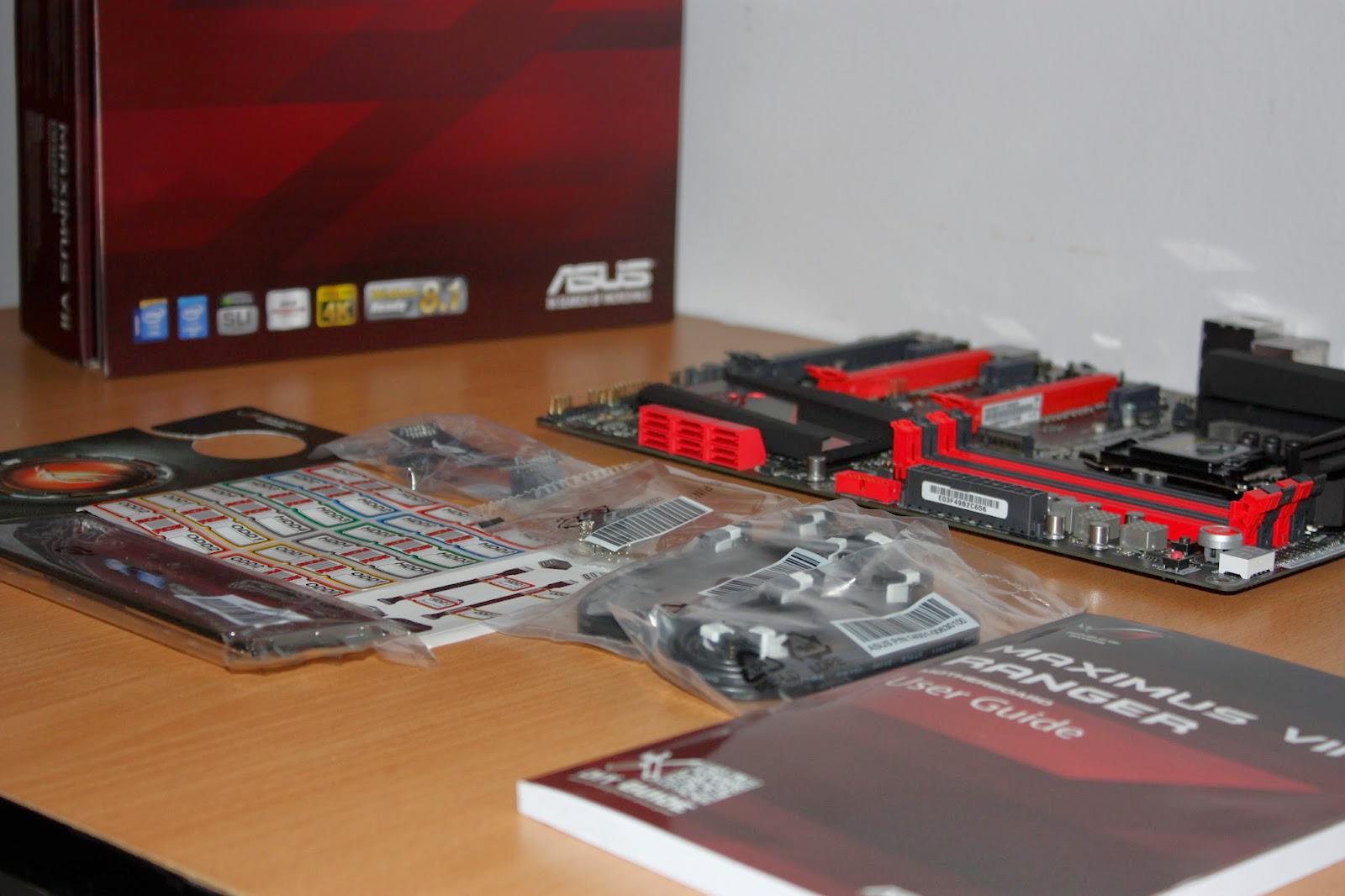 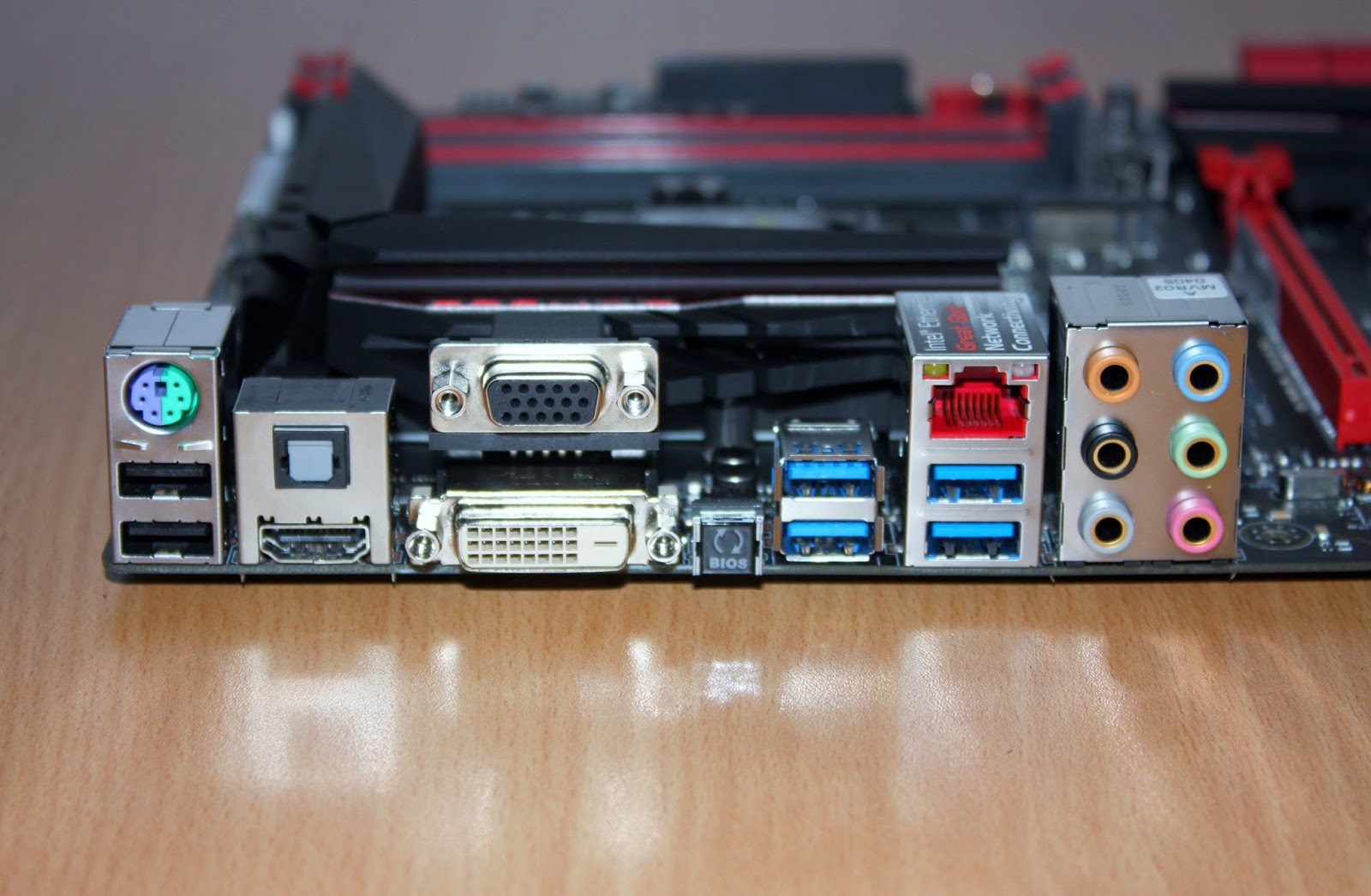 The ASUS Maximus VII Ranger motherboard is equipped with I/O ports that is sufficient for majority of the PC uses. This includes a PS/2 port for keyboard or mouse. The PS/2 interface is still used by many gamers as it promises an anti-jam mechanism i.e. it can record more keypresses and actions than the USB interface in the same amount of time. Below the PS/2 port are 2 standard USB 2.0 ports for standard USB based keyboard and mouse. Beside it is a SPDIF audio out, a HDMI port, a VGA port and a DVI port. This ensures that audio and video output is compatible with almost all the monitors out on the market.
In instances of BIOS corruption, the BIOS Flashback button also enable users to reflash their BIOS with a USB stick and by pushing of this button.
The I/O panel also includes 4x USB 3.0 ports that is more than sufficient for today’s bandwidth consuming devices. A special gamer oriented Intel Gigabit LAN port and 8.1 Audio output ports are located side by side. More information about these unique features will be mentioned in the later part of the article. 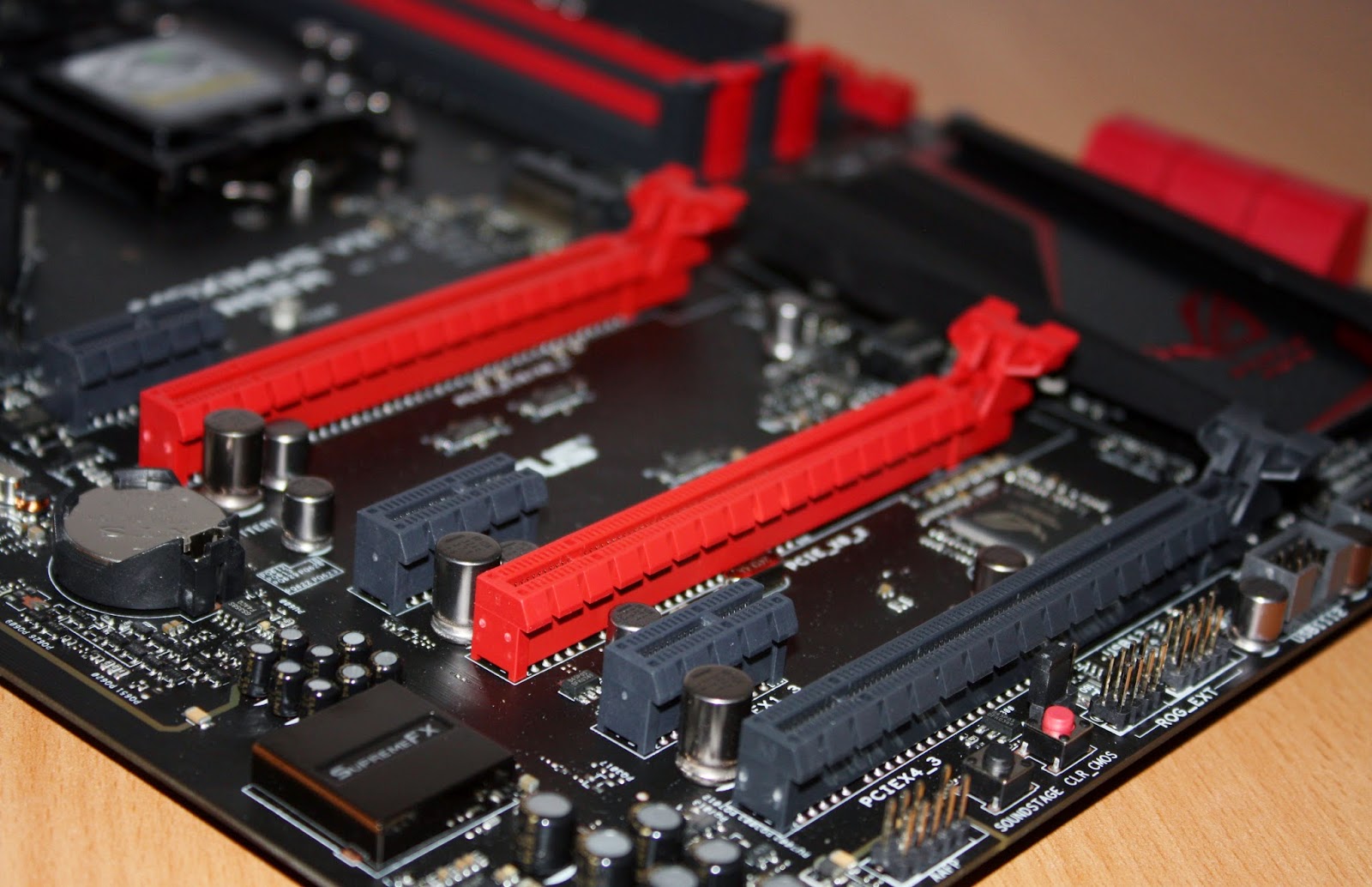 Maximus VII Ranger also has got two full PCI-e 3.0 x16 slots. This means that bandwidth consuming graphics card in the future will be able to run simultaneously at its maximum speeds. This essentially also enables the motherboard to support both AMD CrossFire-X and Nvidia SLI technology. The board also has 3x PCI-e 2.0 x1.0 ports for other add-on cards and another PCI-3 2.0 x4(electrical) slot (shown as a physical x16 slot) for other added-on devices. 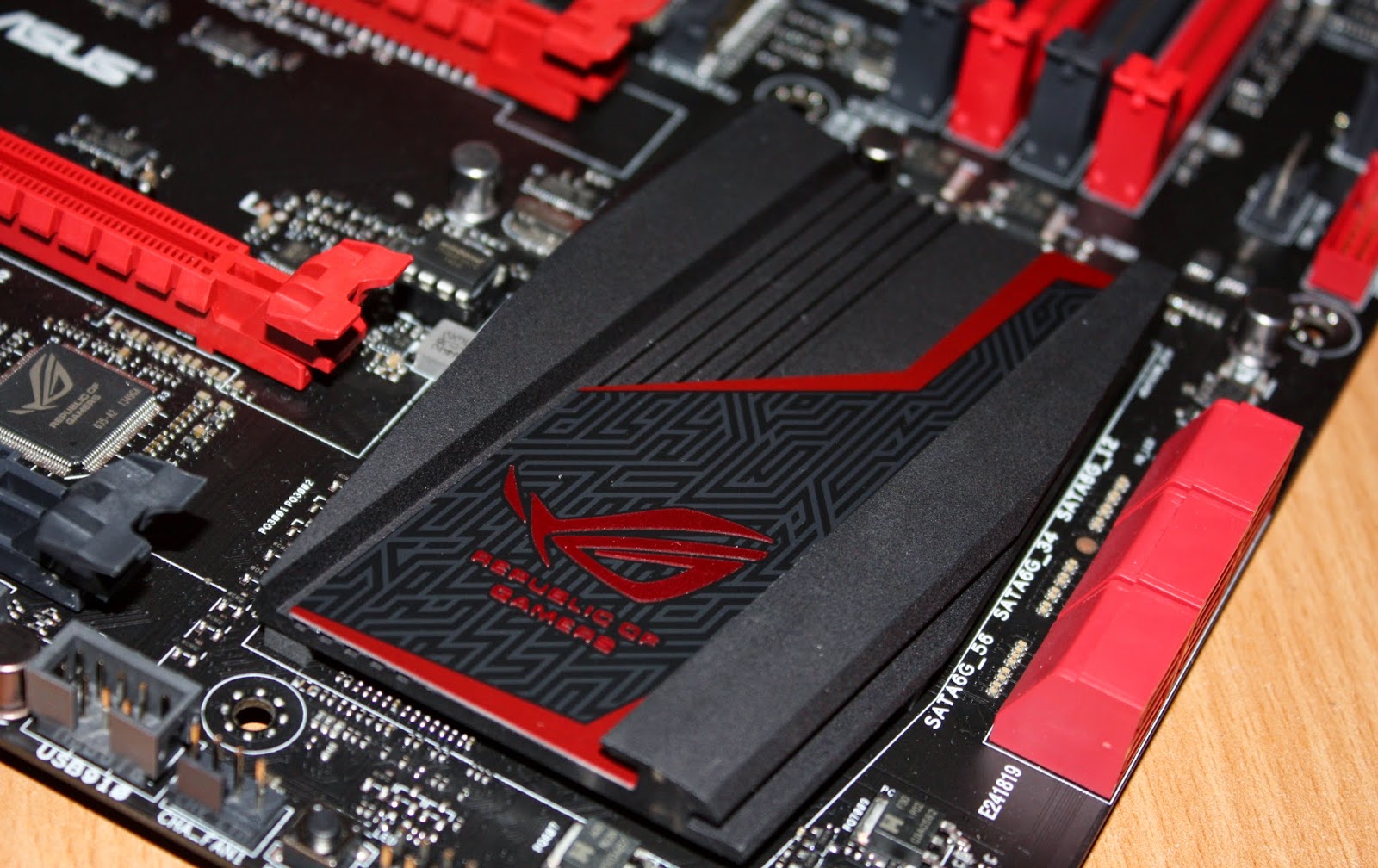 South Bridge heatsink is decorated nicely with a ROG logo.

6 x SATA 6Gbps port for all the super speed SSDs. 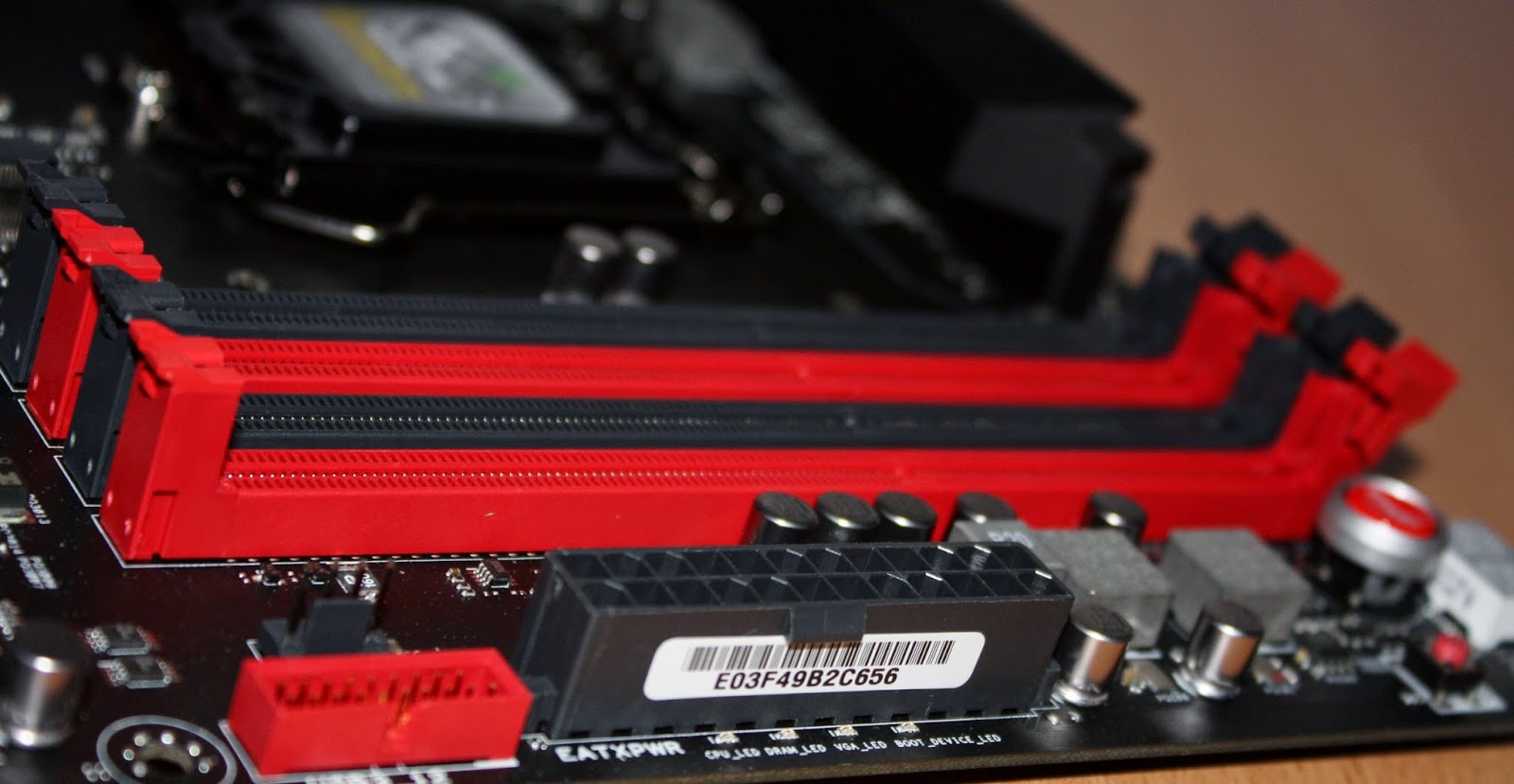 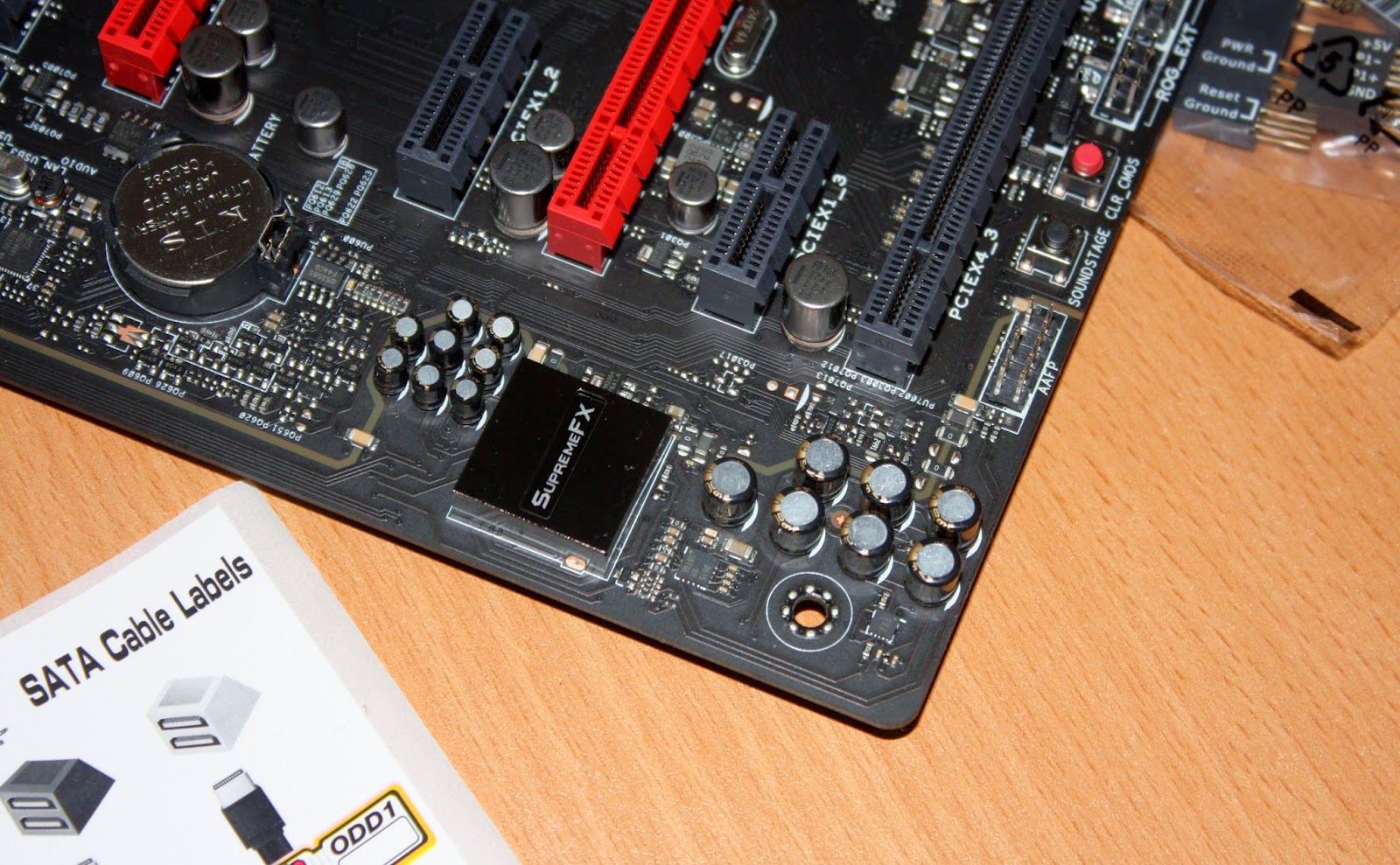 ASUS has integrated a decent audio chip and firmware to enhance audio output quality directly through the motherboard’s audio jacks. They have claimed that with the re-engineered SupremeFX Audio technology, audio will sound as good as having a dedicated sound card. With SupremeFX, there comes 3 core features that differentiates this motherboard’s audio system from the rest.

With Sonic Studio, all qudio quality and personal audio preference can be customized. An interesting feature is its virtual surround sound technology which simulates 7.1 channel audio via even when you are just using a stereo 2.0 headset. This will be additionally useful for direction specific games such as FPS when you need to know where enemy fire is coming from. Furthermore, there are also Reverb Bass Boost, Equalizer, Voice Clarity and Smart EQ controls to help improve various types of audio.

A hardware level audio profile can be stored on the motherboard itself. and profiles can be switched on the fly regardless of operating system. This will be extremely useful for audio sensitive users who want clear distinct audio profiles for different kinds of audio usage scenarios.

With the adoption of Intel’s Gigabit ethernet chip, half of the game’s battle is already won. Intel Ethernet chip is known for its great performance, providing higher speeds and lower latencies. Intel Gigabit Ethernet is the best choice for all sort of PC gamers around.

Fear not from lightning strikes and static electricity hampering computer network speeds. With ASUS LANGuard, the LAN Ethernet ports are all properly grounded for minimal network interruption by external factors.

You will get the best gaming network performance as GameFirst III optimized your home network to prioritize networking throughput to your system and game. Network lags no more when playing your games! 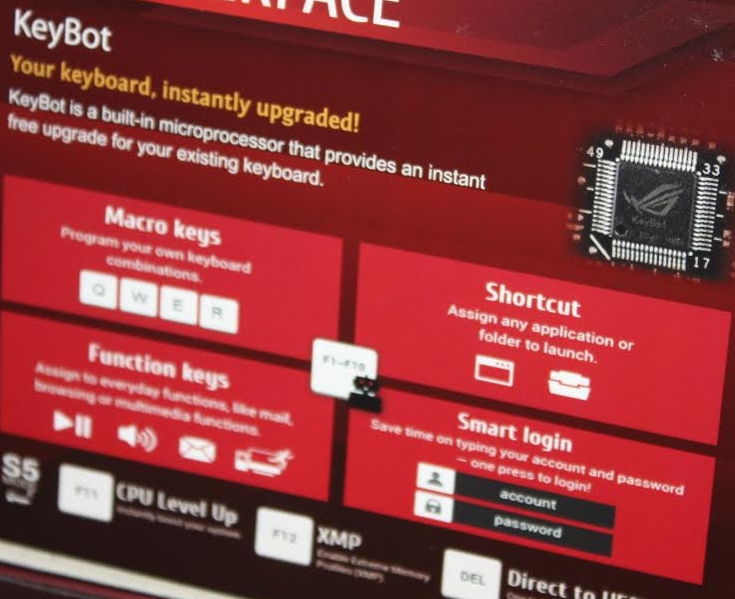 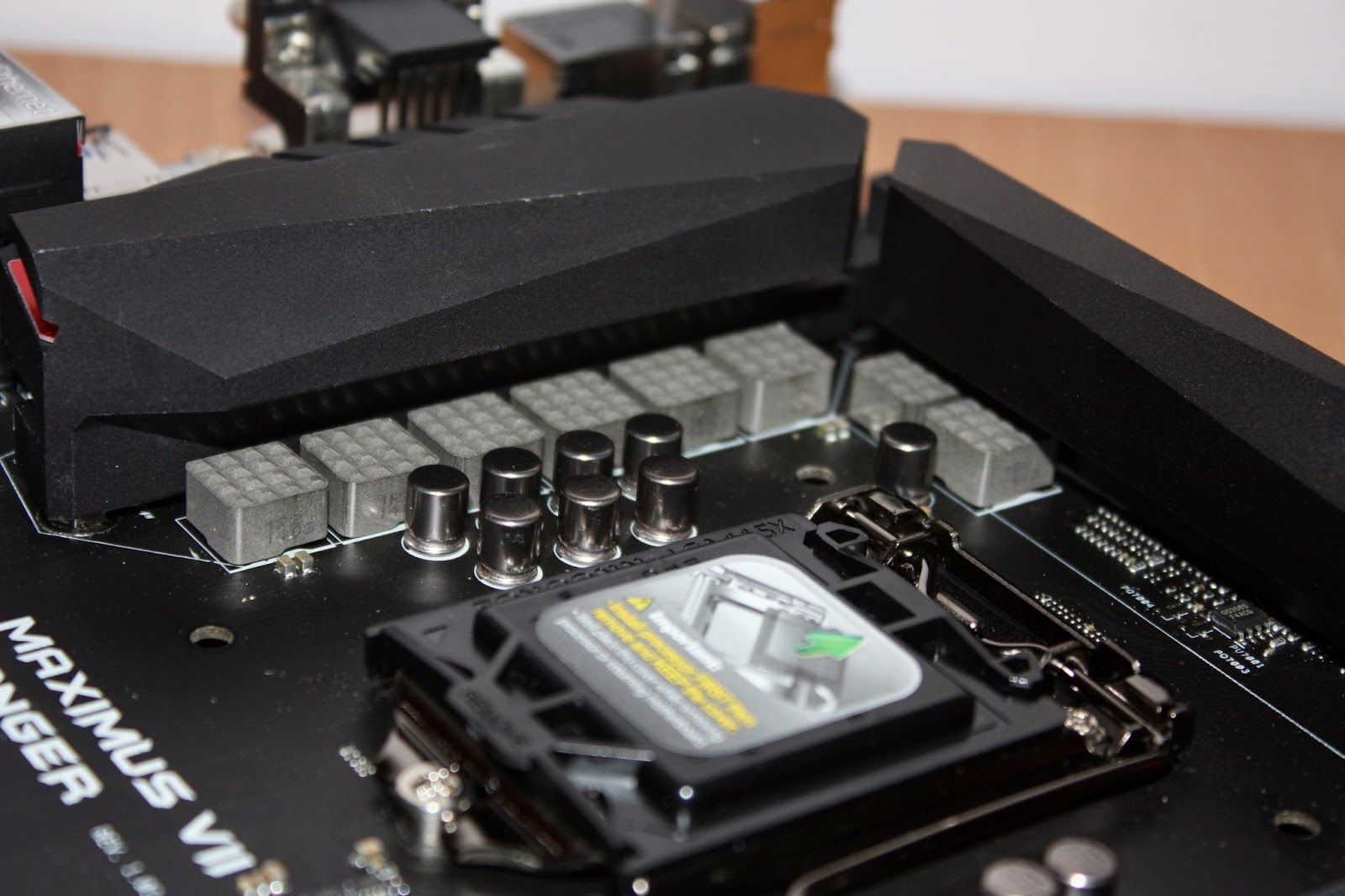 As shown above, ASUS has equipped this motherboard with premium features for better reliability. The use of 10K Black Metallic Capacitors ensure 20% greater temperature endurance and 5x longer life-span than generic capacitors.

Understanding the possibilities of static electricity and unstable electric currents are passed from the power supply to the motherboard, the ROG team has included an additional re-settable fuse to protect connection ports and DRAM against over current and short-circuit damage.

Q-DIMM feature is found on almost all ASUS motherboard. This ensures that memory slot’s clips will not be stucked even with the use of larger graphics card. Memory modules will still remain secure in their spots despite only using a single clip for each module.

Maximus VII Ranger IO ports area are well plated with Stainless Steel, ensuring that they will not rust or oxidize even after years. The IO Shield is also nickel coated, ensuring that you won’t hurt your hands from nicks and cuts.

The ASUS Maximus VII Ranger is featured packed just like any other Republic of Gamers motherboard on the market. It features the best of the best gaming features that brings out the best of every gamer. Adding on the sweet price point that ASUS has placed for this product, we are quite sure that this motherboard will be the perfect choice for many system builders, gamers and PC enthusiasts. With its red and black colour combination, ASUS Maximus VII Ranger will also look stunning in any computer case and will definitely capture the attention of many who walk past it. It is probably the best mainstream motherboard (with high end features) yet for the current Z97 lineup from all the manufacturers.