According to an announcement from Google, Android 4.4 KitKat platform will have its SMS API open, possibly allowing users to choose between SMS applications for their own use. 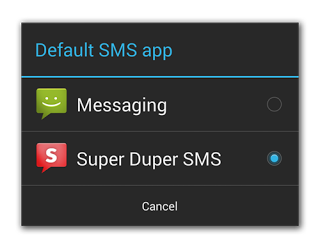 Google yesterday announced their opening up of the SMS API. This means that users will have the choice to choose between the default Android SMS app or 3rd party SMS applications. This +1 to the number of customizability on Android.

Before the official SMS API, developers were all working with the same API which was not released. This means that applications need to have root access to the phone before these SMS applications can work. Google does not recommend this way of creating a SMS application as the API is subject to changes and may not work on all devices.

Therefore, Google decided to open up the API from Android 4.4 onwards, allowing developers to use an API which is more reliable and compliant to their standards. This will make 3rd party SMS apps to be more stable. Google has also integrated the ability for users to set default SMS app for their device, allowing better customizations for users.

Toshiba considers acquisition of OCZ Consumer SSD. Will be a win-win deal for both companies.