Gigabyte has previously showed off their new Brix mini computers at different tradeshows and is now available in Japan for sale. However, those Brix PCs were using Ivy Bridge CPUs. In order to stay competitive as Intel has already upgraded their NUC to Haswell processors, Gigabyte has already started to upgrade their Brix PCs to the newer and better chips. 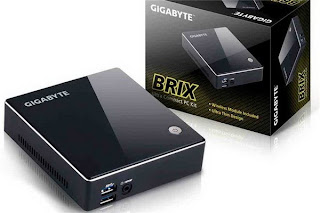 The new Haswell based Brix PCs remains its small form factor at 29.9 x 107.6 x 114.4mm. It is in fact still smaller than Intel’s NUC PC. Moreover, the best performing Intel NUC comes with only an Core i5 processor, but the Brix also has a Core i7 version. Surprisingly, despite all the power packed processors used in these systems, they only have a TDP of 15W. 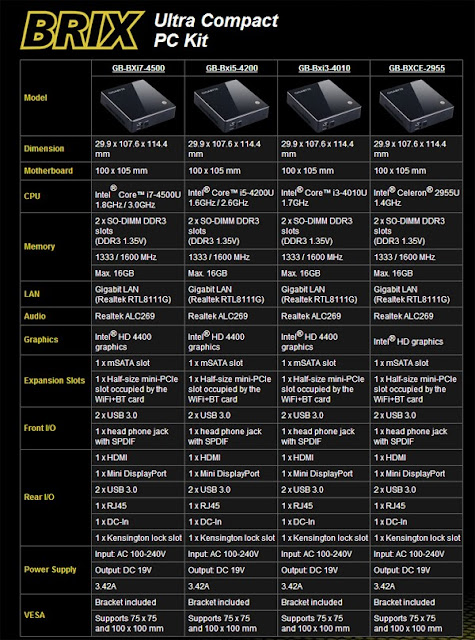 There are four models which are based on the Haswell chip. The Core i7 variant is called GB-BXi7-4500 which uses a Core i7-4500U CPU. This is a dual core hyper threading enabled chip. It is clocked at 1.8GHz, but can turbo boost up to 3.0GHz. It has a 4MB cache, integrated HD4400 graphics part.

GB-BXi3-4010 comes with the newly released Core i3-4010U processor which comes with 3MB of cache. Similarly to the other 2 products, it also is a dual core hyper threading enabled system. It runs at 1.7GHz and uses the same HD4400 graphics part.

The most low-end version of the Gigabyte BRIX PC is GB-BXCE-2955 which uses a Cerleron-2955U processor. It is a dual-core processor without hyper threading technology and is clocked at 1.4GHz.

The previous Ivy Bridge BRIX PCs were rated at a TDP of 17W and the latest Haswell chips has reduced the TDP by 2 watts. This will result in lower energy consumption when the system is used everyday.

All BRIX PCs will support a mSATA slot, a half height mini-PCIe slot for BT + WiFi Card, SPDIF, HDMI, miniDP and 2x USB 3.0.

Gigabyte BRIX also comes with 2 DDR3 SO-DIMM memory slots so that users can upgrade their system with their own memory sticks and hard disk.

There are currently no news on the actual retail pricing and release dates of these computers. The Ivy Bridge versions which are sold in Japan are priced at 36,980 yen (468SGD), 49,980 yen (632SGD) and 59,980 (759 SGD) for the i3/i5/i7 processor respectively. The new Haswell versions may be priced similarly.