Google’s Android System is targeted towards low-power and touch based tablet and smartphone devices. Most Android devices on the market right now runs on an ARM based processor, but there is also a minority of x86 based Android devices (e.g. ASUS FonePad). Of course, there is no doubt that there could be a mass adoption of Android OS on x86 platforms, putting the Operating System on Laptops and Desktops. Currently, the new Android 4.3 x86 codes are already paving its way into desktops and laptops. 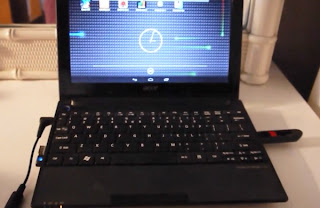 x86 Android 4.3 is still in beta stage and still undergoing development. It is currently not as mature and stable as the ARM variant. The x86 Android is using a 3.10.2 kernel from Jelly Bean and has support for AMD Radeon and Intel Core hardware acceleration.

The system is currently already being used on a AMD C-50 chip on an Acer Aspire 522 notebook. It runs smoothly and most functions are already operating without any hiccups. However, there are still some features which has yet to be supported.

For early adopters, you can head on down to Google’s Android For x86 site to download the corresponding LiveCD and install it by burning it into a CD.