“Jobs” will be released on August 16 in the U.S.. Currently, there have been news that Ashton Kutcher who plays Steve Jobs in the movie will sign a contract with Lenovo to promote their PCs.

Many people are looking forward to the upcoming movie which retells the life of Steve Jobs. As you know, Steve Jobs is the father of Apple and Ashton Kutcher who plays him in the movie is going to be an ambassador for a Windows brand. Oh the irony… Ashton Kutcher will be signing the near 10 million USD contact to promote Lenovo laptops by appearing in multiple advertisements. Who knows what Lenovo will do to make use of this Jobs lookalike to promote their PC? 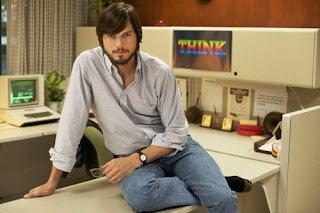 Ashton Kutcher starred in classic movie “The Butterfly Effect” and popular U.S. drama “Two and a half men”. This is not his first time being an ambassador for technology products. Since 2009, he has been Nikon’s ambassador but earlier in April, because of deteriorating relationships with Nikon and other reasons the contract ended.  Nikon denied these rumours.
Well ain’t Lenovo quick and witty…

Japanese develops electrical circuit which may be implanted in humans