Looking forward to see Ashton Kutcher starring as Steve Jobs in Job’s latest biographical film? Get a sneak peek into Steve Job’s life story re-enacted in a movie with the newly released trailer. 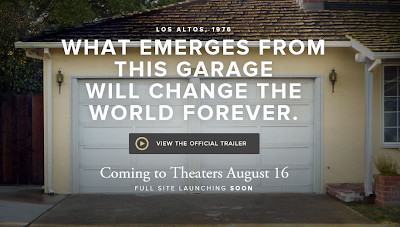 Want to find out how did Apple start a war with IBM on the Personal Computer space? Based on Steve Job’s autobiography, the film adaptation of his life “Jobs” has just launched their first film trailer. The movie will be released on 16th August in the United States. We are still unsure when the movie will reach Singapore shores.

The two minute trailer showed Steve Jobs and Apple computers in various critical moments which included Job’s drop out of college, Wozniak’s development of Apple I, Apple Computer starting up in their garage, the Apple Lisa’s project, Apple’s board firing Jobs, Jobs’ regression, the emergence of iMac and iPod and how Jobs drove one of his employees out of the office because they think that “Typeface isn’t a pressing issue”.

Steve Wozniak : We’re going do this thing. Come up with the name.
Steve Jobs : “Apple”
Steve Wozniak : That is so much better than “Phaserbeam Computers”