Haswell processors has only been launched for a few weeks and we are already seeing many people building their new Desktop PCs based on the new architecture. Even though CPU performance isn’t too much of a improvement from previous generation Ivy Bridge processor, we are seeing much better integrated graphics performance, putting the Haswell processors to compete directly with AMD’s APU technology. Those who are looking for a simple budget build and also thinking of future upgrades should be wrecking their brains when it comes to choosing a new LGA 1150 motherboard. Today, we take a look at the ASUS B85M-G and let you decide if it’s your cup of tea. 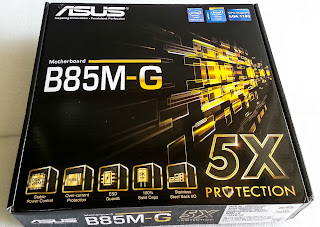 Looking at the box, we can see that ASUS is trying very hard to bring across the idea of 5x protection that this motherboard gives to users. This include 5 core protection features that this board has as compared to lower end motherboards which helps to make ASUS motherboard to stay reliable, upholding its brand name. We will talk more about these 5 protection points in the coming sections. 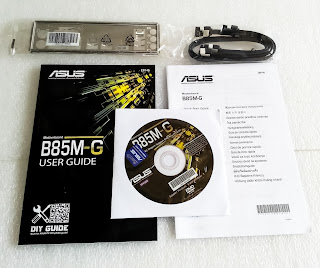 Within the box are some very simple accessories which are as expected of a budget oriented market segment motherboard. There’s a IO Shield, SATA Cables, Driver CD, Case badge, Warranty Info booklet and a User Guide. 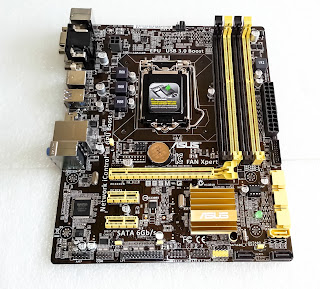 As many have already known, ASUS has changed their colour scheme for their LGA1150 lineup to Gold, as opposed to previous blue. There are mixed feelings with this change, but personally, I much preferred the previous blue. This is a no-frills motherboard to purchase as it is really as simple as it seems to cut down the production costs of it. We aren’t seeing any heatsinks at the VRM area and the only heatsink found on this board is on the Haswell Lynx Point chipset. By the way, this motherboard is in a Micro-ATX form factor and will fit in all mid-tower cases in the market. 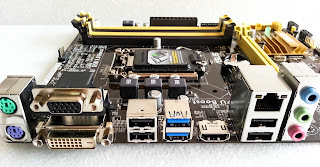 As for the IO Ports, we are glad hat there are multiple video output interfaces which allows us to connect to the various type of monitors we have at home. More specifically, these interfaces include a DSUB VGA, DVI-D as well as a HDMI. They are said to be able to work simultaneously across monitors.

Other than Graphics Interfaces, there are also 4 USB 2.0 ports, 2 USB 3.0 ports, a Gigabit LAN port, 5.1 Audio and PS2 ports for older keyboard and mouse. 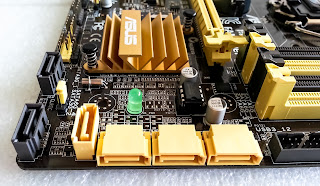 As for storage interfaces, there are 4 SATA 6Gbps ports and 2 SATA 3Gbps and a front panel USB 3.0 port for external case USB 3.0 expansion.

ASUS focuses on 5 core features on the motherboard that it hopes to differentiate their offering to competing products. Although targeted at the lower market segment, these 5 protection features keeps the board stable.
In fact, they have been used in almost all ASUS motherboard all along and aren’t anything new. However, I’m glad to see DIGI+VRM processor to be found on this motherboard as it is a feature which is only found in higher end motherboard. Digital Circuitry improves electrical stability across the board (literally) and extends the lifespan of electrical and PC components. 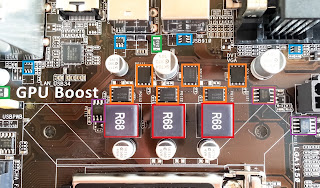 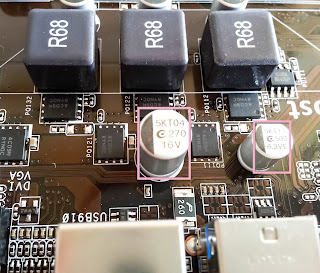 Asus B85-G uses all Taiwan AP-CON soild capacitors which are rated at a 5,000-hour lifetime and a operating temperature at maximum 105 degreeC. These capacitors are said to have 2.5x longer life span than standard soild capacitors. 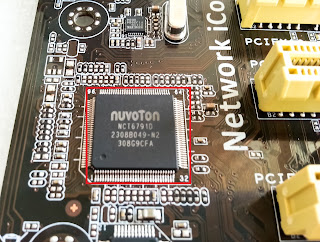 Nuvoton NCT6791D is a Super I/O Controller. It provides the PS/2 ports for the motherboard. Additionally, it gives the motherboard wake-up functions, HW Monitor functions and fan-speed control capabilities. 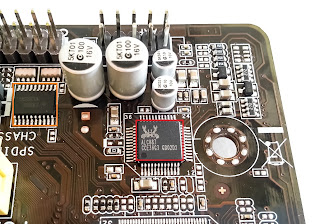 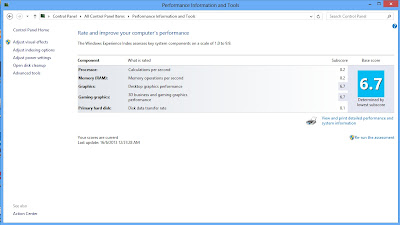 We found that the whole B85 solution for Haswell platform to be appropriate if you are looking for a new budget friendly build. This motherboard only costs 138 SGD and is probably the cheapest ASUS LGA 1150 motherboard found in local shops. The ASUS B85M-G motherboard brings good value to system builders as it has got considerably good reliability features put in place. Moreover, it is covered by warranty provided by local distributor Avertek for 3 years.

ASUS B85M-G could make a good motherboard for anyone building a new office computer and is a good option for systems that need only basic functionality.Thanks to the features provided with the new B85 chipset, we are already getting native SATA 6Gbps ports, ensuring that SSD adoption is also a viable option. With 138 SGD, this is probably the best no-frills Micro-ATX motherboard you can get from ASUS.

Logitech Gear Wars : Imagine your Gaming Rig and they will bring it to life.