HTC One to come in Red and Blue
HTC’s flagship smartphone, HTC One has been one of the most popular top end Android devices in the market. Competing heads on with Samsung’s Galaxy S IV, HTC is in fact doing quite well in terms of sales. It is said that this flagship will soon come in new colours, attracting even more buyers with colour preference. Yes. Coloured metals are sexy. 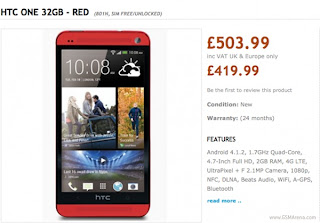 HTC is all set to launch a Red and Blue variant for their flagship HTC One. These two new hues will join the currently available Black and Silver versions.

The Red variant of the HTC One appeared on HTC’s US website, but was later removed. It was also listen in an online retailer’s website in the UK for £504 (around 970SGD) for a 32GB version.

Sadly, these colours are still not been officially announced by HTC, but we are quite sure that they will soon reach the market.