Nvidia has launched their latest and greatest graphics card for the market, rightfully clinching the title of “World’s fastest graphics card” back from its rival AMD. This time, AMD has almost nothing out in their pipeline to compete with this insane performing card. Will Nvidia seize the opportunity to gradually kick AMD out of the graphics card race?
Today, we will be doing a technical analysis and review on the ASUS GTX Titan to see what it offers that earned it the spot “World’s fastest graphics card”.  Nvidia has decided that graphics card vendors, such as ASUS to not change any looks from the reference cards. This has actually made them resellers of Nvidia’s GTX Titan instead. Is the supercomputer-grade NVIDIA Tesla K20X architecture GTX Titan really this great that no other modification is needed?

As said above, vendors will not change any aspects of the physical graphics card. That means, all GTX Titan from any vendors will be the same, other than their packaging and vendor branding. For ASUS, they have an in-house in-built GPU Tweak software advertised on the box as well, probably giving them that extra edge monotonous GTX Titan sales competition. 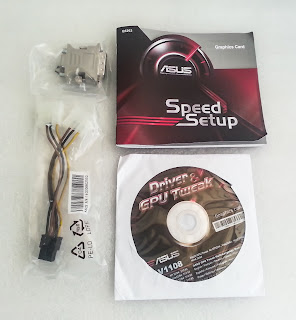 As for the accessories, we get a standard 2 Molex 4 pint to a single 6pin PCI-E power connector, a DVI to DSUB converter, a Driver CD that also comes with ASUS’s own GPU Tweak software and a Setup Guide. 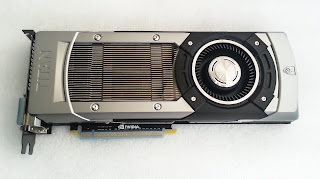 Unboxing the Behemoth GTX Titan, we reveal a futuristic looking graphics card that differs from standard Nvidia reference designs. Its cooling system has definitely been beefed up by Nvidia in order to tame the beast. True enough, no vendor branding is found on the card. ﻿ 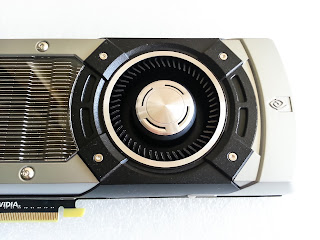 To introduce efficient air cooling for the card, GTX Titan is equipped with a blower fan to intake air from within the case and then exhausted directly out of the case. This allows cooling to be more efficient compared to alternative solutions whereby hot air is taken in from the outside instead. 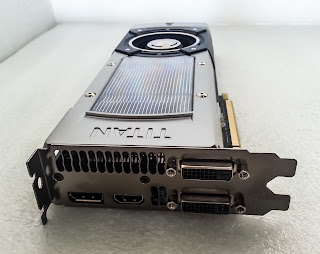 For connectivity, GTX Titan comes with 2 Dual-Link DVI capable of a maximum 2560 x 1600 resolution. Multiple monitors setup is possible. Moreover, it also has a HDMI port that allow transmission of audio as well. Lastly, the graphics card is also equipped with a single Display Port for monitors that support it to use it.﻿ 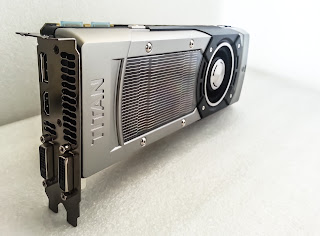 GTX Titan also supports 4-way SLI and comes with a SLI connectors to support that configuration. This beast will break any current world benchmark records without any additional extreme cooling if the acclaimed performance from Nvidia is true. We will bring this card to the test in future reviews.﻿

From the top, there is a Geforce GTX branding which lights up when attached to a system. A system with a windowed side panel will look extremely good with multiple GTX Titans setup, perfect for system enthusiasts to show off. 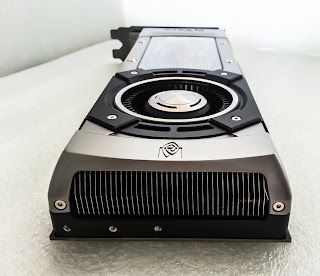 The whole GTX Titan graphics card is also cooled by a heat sink fan installed throughout the card. From the back of the card is where the blower fan intakes cool air from the front of the case which then cools the heat sink which is directly connected to the GPU core, effectively conducting heat away from the GPU core. This also means that the card is also overclockable and that even higher performance from the card is possible.﻿ 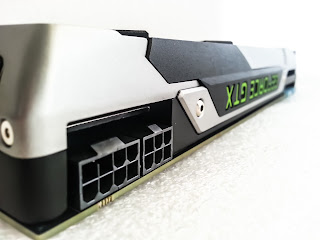 Besides that, GTX Titan requires a single 6pin and 8pin connector to power it, suggesting that it probably take up at least 300W of power. ﻿

A deeper look into its cooling features﻿ 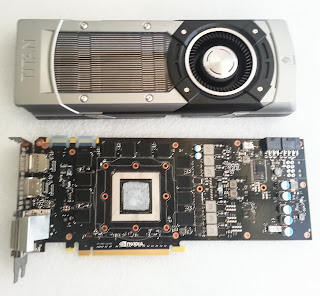 The whole shroud found on top of the PCB can be easily removed with the unscrewing of some screws. It can be seen that the graphics card and the coolers are two separate entity and that the card is bestowed with complicated circuitry to make things work well. 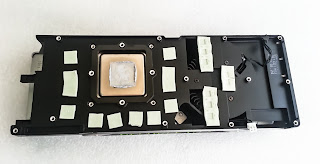 From the back of the cooler component, it can be seen that another metal plate is placed below the actual aluminum sinks. These sinks cools the memory chips and MOSFETs. The GPU Core is cooled separately by the huge array of fan sink. AVapor Chamber thermal solution is coupled with a huge fin stack to transport heat away from the GPU to a large heatsink. The blower fan can then effectively cool these sinks with the cold air taken in, sending hot air out of the chassis.﻿ 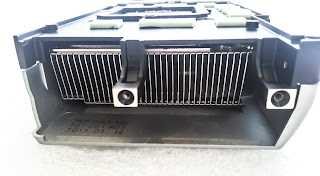 Here at the side of the cooler where the graphic ports are found, the heat sink is directly targetted to send hot air out from the computer chassis.

Overview of the GTX Titan PCB

A look at the GTX Titan components﻿ 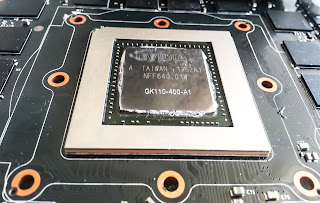 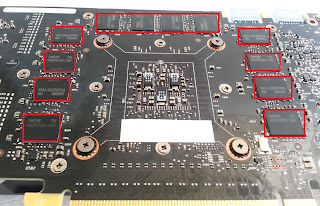 A total of Twenty-Four 2 Gbit GDDR5 memory chips were used on both sides of the PCB with Twelve on each side.
﻿ 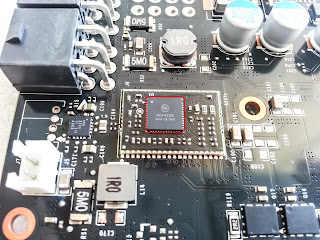 A ON Semiconductor NCP4206 PWM integrated power control IC is used on the ASUS GTX Titan. This combines a highly efficient, multi-phase, synchronous buck switching regulator controller with an I2C interface, enabling digital programming of key system parameters. NCP4206 is an Digital PWM IC which has 6+2 power phases for voltage control and monitoring.﻿ 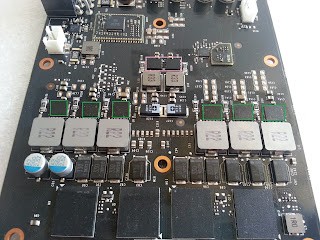 Green Box – The DrMosfet FDMF6823A integrated driver IC. The two MOSFETs are a high-voltage MOS, and low-voltage MOS respectively. The DrMOS can provide up to 60A current, and more than 93% conversion rate.
Pink Box – A ON Semiconductor 4901NF mosfet (30v Asymmetrical Dual N- Channel) 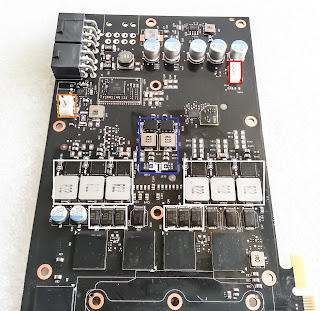 The ASUS GTX Titan was paired up against ASUS’s popular DirectCU II cooling solutions that comes with a HD7850 and a GTX660. Not forgetting that the power consumption of these cards are rather different and that heat output differs as well. GTX Titan is a graphics card that requires significantly more power which causes higher temperatures even at idle. We are getting a 48degree celcius temperatures even when we are not doing anything. This is quite a high temperature and that the beast can be further tamed if 3rd party cooling solutions can be deployed on it. The DirectCU II solution seems to work much better as compared to the stock cooling solution on the GTX Titan. We think that if a high-end cooling solution like DirectCu II was to be installed on the GTX Titan, the card will run even cooler and therefore, result in a higher overclock. However, Nvidia has not approved third party cooling solutions on the GTX Titan, and therefore, we won’t be seeing any of those at all.﻿

For actual game performance, Resident Evil 6 and Final Fantasy XIV benchmarks has scores that goes way beyond the scores on GTX Titan than on the GTX 660 and HD7850.﻿﻿﻿

Our takes on GTX Titan? We think that performance on GTX Titan is extraordinary and no other flagship single GPU card on the market now is able to compete with such a huge increase in performance that comes with GTX Titan. However, we think that the stock cooling features on the GTX Titan can be further improved to cool the GPU even more effectively thus allowing higher overclocks on the card.
Nvidia’s control on the card is ridiculous. It monotones the number of variants in GTX Titan on the market and prevent graphics card vendors to innovate on the technology. It also kills competition within the vendor space. There actually nothing special of the cards being branded ASUS or any other brands as they are all stock reference designs from Nvidia. So which vendor will get the most sales of the GTX Titan? One that has the most availability and lowest price, which will probably be set based on Nvidia’s relationship with the vendor.
We hope to see custom coolers on the coming new Nvidia graphics cards coming from the various vendors. We want the technologies from the best of Nvidia as well as the best of the respective vendors. We want the market to be more interesting and competitive again.

I would like to express my greatest gratitude to hardware enthusiast Poor_Poor for his benchmark scores and photos for The Tech Revolutionist to have such an exclusive first look and technical analysis of the new Graphics Card from NVIDIA and ASUS.﻿