With the holidays just around the corner, there have also been an increase in the number of custom desktop computers orders for us. The increase in demand is possibly due to the launch of new games such as Crysis 3 , Assassin’s Creed 3 and DmC. Many people actually want to build their own computers, but do not have the knowledge of PC hardware or simply do not know how to fix up one. Today, we are going to solve one of the problems by recommending an affordable setup that is friendly to the wallet and yet not compromising quality and performance as a gaming system.

However, dedicated graphics cards do not come cheap. A considerably good graphics card costs at least 200SGD, which can be quite straining for someone who is looking out for a budget gaming system. Luckily, AMD came out with their innovation product – APUs to target the gamers who are on a tight budget and yet want superior performance with a dedicated graphics card.

So what is an APU? APU stands for Accelerated Processing Unit. An APU fuses a CPU core and a Dedicated Graphics Core into a single chip. In layman terms, it simply means you have a graphics processing unit within your actual computer processor, essentially removing the need to buy a considerably expensive dedicated Graphics Card. This is the only solution possible on the market for now in order to have the best of both worlds at a affordable price.

Other than selecting the APU with our build, the next important hardware to consider is the motherboard where the APU sits on. The motherboard provides additional features for the whole computer system. For example, if a motherboard has a HDMI output port, you can use a HDMI cable to connect to your monitor instead of a standard VGA cable. Any ports available on the computer is determined by the motherboard. If you are specifically looking for a certain port, make sure that the motherboard has it. Other unique features like automatic overclocking to improve performance and energy saving reduce electricity usage are also available on specific motherboards.

First look at the components 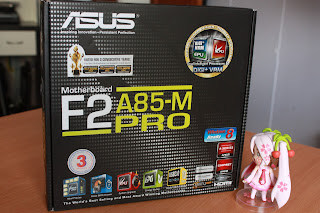 The ASUS F2A85-M PRO Motherboard comes in a Micro-ATX form factor. It is a Windows 8 certified motherboard, meaning that almost no additional drivers are needed to be installed if this system was to run on Windows 8 Operating System. There are various unique motherboard features available and will be covered in part two of this recommendation article. 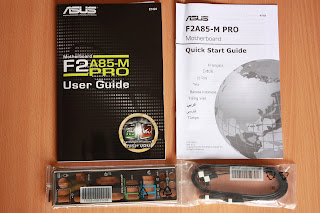 The motherboard comes with 2 SATA 6Gbps cables, a padded IO Shield, a user guide and a quick start guide. Usually, padded IO Shields are found only on higher end motherboards. Since there is no Republic of Gamers series for AMD Trinity chips, this motherboard is actually considered top of the line Micro-ATX from ASUS.﻿

ASUS F2A85-M PRO is a feature packed motherboard. It consists of all the hardware features available on high end motherboards even though it is smaller than the usual ATX motherboard.

One of the reasons for choosing this motherboard is because of the availability of a front panel USB 3.0 Port which can be connected to our new case – Cooler Master K380. ﻿

One of the core strengths of the A85 chipset is the strong Integrated Memory Controller. Results have been shown that RAM speeds can go beyond their stock settings by overclocking the memory modules. However, as the article focuses on recommendation of a stable build, memory overclocking will not be covered. We are looking at an affordable and effective LAN Gaming System. With 4 DIMM slots available, system builders can populate these slots with cheaper smaller capacity RAMs instead.

The ASUS F2A85-M PRO has 2 PCI-Express x16 slots. However, although the white PCI-E slot is physically a x16, it is only a x8 electrically. CrossFireX is supported for GPUs to run at x8,x8 speeds. A single graphics card will run at x16 in the blue slot. We are just going to test the internal APU dedicated graphics and will not be adding any other graphics card. However, these slots are there for future expandability. If new graphics demanding games requires a better graphics card, ASUS F2A85-M PRO has got that covered.

ASUS F2A85-M PRO comes with 2 standard USB 2.0 ports and a PS2 Mouse/Keyboard port. Either of them works. A definite plus point of this motherboard is the abundance of USB3.0 ports it has. ASUS F2A85-M PRO has actually 4 USB 3.0 ports, ensuring that new USB 3.0 devices are not bottlenecked by the 2.0 interface. Besides that, every single graphics port is already available on the motherboard. We’ve got HDMI, Display Port, VGA(DSUB) and DVI. This ensures that the motherboard works out of the box. Additionally, there is also an e-SATA port and a Gigabit LAN port. The motherboard also has built in 8 channel audio powered by ALC892 Audio Chip, one of the better audio chips from Realtek.
﻿

AMD A85X chipset natively supports 8 SATA 6Gbps ports, unlike Intel latest Z77 chipset which only supports 2. This allows more SSDs to be installed on the system without worrying that there is not enough bandwidth for the drives. Besides that, multiple SSD RAID 0 configuration is also possible, a feature that current Intel chipset fails to attain. If you’re wondering where is the last SATA port from the A85X chipset, it is found at one of the IO ports, disguised as a e-SATA port.

Generally, the motherboard looks refined and aesthetically unison in terms of the colour scheme. It will look nice in the case with some blue fans and lighting.

A 120mm fan can be installed at the back of K380 to exhaust hot air from the case. It also has water cooling holes to support external radiators.

The big hole at the CPU area on the motherboard tray on the K380 allows easy installation of 3rd party CPU coolers. Besides that, with the availability of cable management holes, cables can be tucked at the back of the case easily, making smooth airflow throughout the case and efficiently cooling the system components.

A front intake fan is also preinstalled in the K380. It lights up red, making the whole case seem to be a expensive case. However, trust me that the case is highly affordable and the best choice for our setup recommendation.

After introducing all the different parts which we will be using for our build, we will leave the performance results and the pricing of the whole system to the next article. Be sure to check out [Part 2] of our recommendation article!

This faucet is actually an iPhone Charger