Deepcool is a China based CPU cooler manufacturer and has been around in the market for almost 2 decades. Its recent CPU coolers have gained popularity with system builders after local distributors brought the product into the market. There is no other CPU cooler that can be found in Singapore which provides great cooling performance at an unmatched price tag.
﻿ 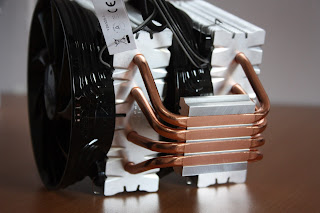 Deepcool Frostwin includes the brackets for all the supported platform. Besides that, thermal paste is also included so there is not a need to buy additional thermal paste for installation unless a better thermal conducting material is required. The thermal paste does its job, but it is not the best available on the market. Lower temperatures could be attained with better thermal interface was used. 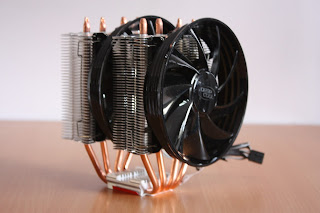 The CPU Cooler is attached with 2 120mm fans that is preinstalled on the heat sinks. It is rare to see manufacturers installing 2 of the fans together on a single CPU Cooler unit. Usually, only 1 fan is included. ﻿ 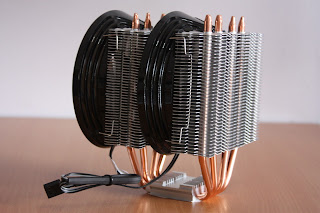 The 2 fans are connected together with a single 4pin PWM fan connector. Fan speed will be adjustable if the connector is attached to a fan controller or the motherboard fan header. However, more work will be required if individual fan speed adjustments are required due to the single connector.﻿ 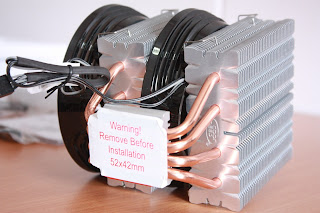 The CPU Cooler base is 52 x 42mm and is directly connected to 4 heatpipes that conducts heat away from the CPU directly to the heat sink fins.﻿
﻿

Deepcool has adopted a direct copper contact technology for the CPU Cooler to interface with the processor. The direct contact allows better dissipation of heat away from the CPU. 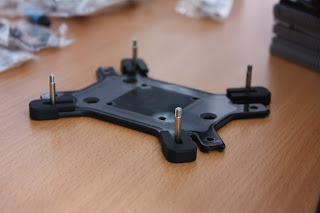 The CPU bracket installed at the back of the motherboard is also padded with rubber to prevent vibrations caused by the fans. 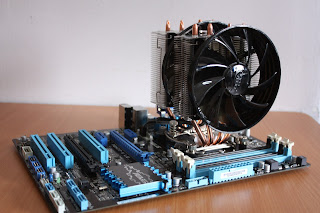 Deepcool Frostwin can easily be installed without much efforts. Simply install the retention plate for the motherboard, and then put on the brackets to secure the retention plate. The CPU cooler is then placed on the CPU and fastened to the brackets using thumb screws provided. To make sure that the CPU cooler is placed in the correct way, the fans should exhaust air out of the side of the case to ensure efficient airflow within the system.﻿ 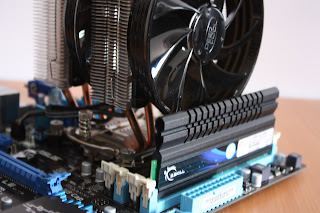 Sadly, as shown in the photo above, RAMs with tall heatspreaders are not compatible with the Deepcool Frostwin Cooler. They will be blocked by the 120mm fan that protrudes out to the RAM slots area.﻿ 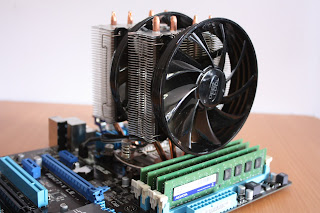 On the other hand, bare DIMMs without any heatspreaders fits well under the 120mm fan on the CPU cooler. ﻿ 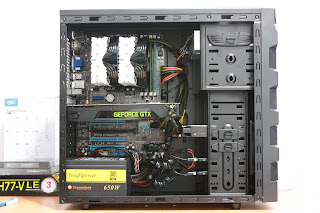 Deepcool Frostwin will fit in almost all cases because of its safe height clearance. Aesthetically, it looks quite good with a huge twin tower CPU cooler within the case. As compared to a stock Intel CPU Cooler, it easily brings out its value in terms of price, looks and performance.

﻿
Frostwin works decently on a high end Intel Core i7 system. Temperatures are down significantly, especially when at 100% CPU load. The difference could be as high as 24 degrees celcius, possibly due to the direct copper heatpipe technology. This also means that with this 3rd party CPU cooler, CPU lifespan could be extended and the system could last for years ahead. ﻿

﻿
We’ve always admired Deepcool’s lineup of CPU coolers. They always provide the best bang for the buck value and yet does not compromise any performance. Performance on Deepcool Frostwin is magnificent and we saw almost 30% decrease in temperatures when on load and also 20% decrease in temperature on idle. With all these great thermal cooling technology found within Deepcool Frostwin, one would expect the cooler to cost over 100SGD, but surprisingly, Deepcool Frostwin retails at SGD59 . It is available at most major hardware component retail shops in Sim Lim Square and proudly brought into the country by local distributor Tech-Dynamic. Therefore, we would like to recommend Deepcool Frostwin as a no-frills third party CPU cooler and should be the standard for benchmark for competing CPU coolers in terms of price and performance.﻿

[Guide] Directions to IT SHOW 2013 at Marina Bay Sands