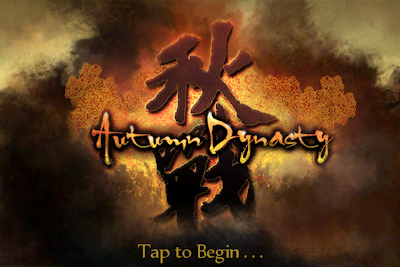 When it comes to iPhone games, most people usually look away without much interest. The app store is plagued with a gigantic cesspool of garbage and pay to win games. This is mostly attributed to the fact that Apple does not disapprove of the current business models of most of such games. If an app looks good and plays well with very little stability issues, it’s usually submitted without much disapproval unless it does contain explicit content or some other form of media that people disapprove of in general like say racism. One application that does stand out above the rest that doesn’t follow the above mentioned horrible model would be Autumn Dynasty, a game made by Singapore based Touch Dimensions .

Autumn Dynasty a fairly expensive application, costing approximately 9 SGD on the Singapore Apple App Store and runs on both iPhone and iPad. A new version has been recently released for BlackBerry 10 but of course, the hefty price tag makes people wonder: is it truly worth the cost for such a game? 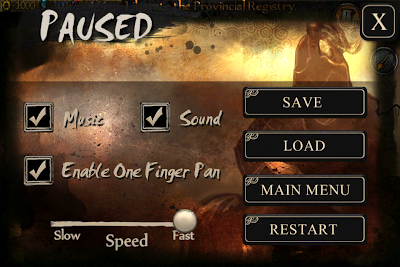 Autumn Dynasty is an RTS game set in ancient China painted in a very interesting art style with very beautiful aesthetics reminiscent of olden chinese paintings and games like Okami. It features 3 different single player game modes: story, where you play the role of different Chinese generals and get to learn how the game works as you progress along the missions, skirmish mode where you setup a game and fight against AI players as well as blitz where the maps are much smaller than in skirmish for non-stop aggressive battling.

Finally, there’s multiplayer mode where you can fight with friends via bluetooth or search online for a game. The game also has some very useful settings which allow for increasing the speed of the game as it does feel incredibly slow, especially when units move through rough terrain. Another useful option which can be used would be the save feature, allowing for people to play the game in short spurts and not being needed to restart the entire scenario if they make one big mistake or if they do not have the time to finish the whole mission. 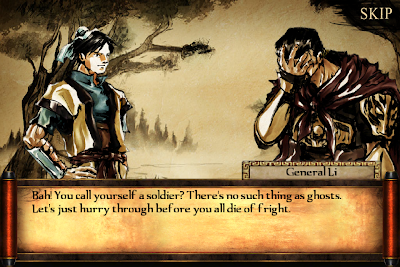 Campaign mode will be the mode most players look forward to. It features the story of General Li and Scholar Hsu who deal with insurrectionists and learn about how the empire works and how corrupt the officials are. In all honesty, the story isn’t much to be amazed about and there is certainly no amazing plot twist halfway through. Most things will go the way the player expects it to go and there are around 10 missions total for the story mode.

Though disappointing in terms of story, the game’s mechanics hold up quite well. The ability to select multiple units via using the brush option to draw a circle around units makes death pushes a lot easier.

Micromanagement, however, will require some skill to carry out, especially if you are playing on a phone. This is mostly due to the size of the screen on a phone versus that of an iPad. Smartphone users may find themselves unable to micro well due to the size of the screen and the way the units are managed. I found myself unintentionally running my army into death on more than one occasion trying to enlarge the screen or to shift the screen around the map. Individual skills of the units are creative such as being able to ambush the enemy by staying silent or setting fire to enemies. Allowing every unit in battle to be able to build buildings makes building management a lot easier. 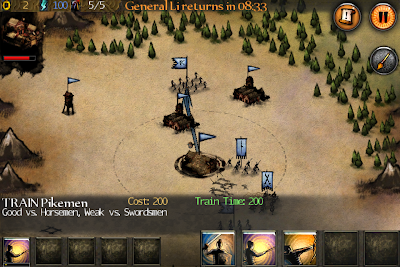 Overall, the game is intuitive and fun to play for a mobile game. It is still hampered by a very severe lack of unit and building variety. Perhaps such a complaint is too harsh for a game that runs on mobile phones and only costs 9 dollars compared to a big PC title like say Starcraft 2 with a massive tech tree and a larger pool of units and, of course, a massive price tag.

The main problem that stems from having limited numbers of units at the end of the day would be that the game becomes repetitive after awhile and strategies for online gameplay become limited. One could argue that the option for multiplayer is a nice way of adding extra content to the game so that players have one other outlet to spend their time with the game. However, not everyone is a competitive player and I feel like with a very limited amount of strategies one can execute, it can become a simple rock scissors paper battle at the end of the day even with a strategem skill tree that offers some changes in the form of different skill selection options for individual units.

Perhaps, the developers could have spent the time taken to implement multiplayer to increase the variety of units available to the player. However, there still is an active playerbase who engage in multiplayer skirmishes.

Autumn Dynasty isn’t exactly a shining and radiant diamond in the sea of horrible iOS applications, but it’s definitely a step in the right direction for high quality and well made games. It is also definitely a step towards establishing a gaming industry in Singapore where quality games like this are never or rarely ever seen.

Summary:
The Good:
+ Unique and appealing art style
+ Low load times make for fast access to game
+ No pay to win elements make way for fair gameplay
The Bad:
– Can be frustrating at times especially on phones due to small screen
– Becomes repetitive quickly
– Generic Storyline
– Very limited in general as an RTS due to lack of proper technology tree and very limited pool of units