ASUS running out of names : Intel x86 based FonePad Android Tablet to be detailed at MWC?

Home » ASUS running out of names : Intel x86 based FonePad Android Tablet to be detailed at MWC?

ASUS FonePad is a 7-inch 3G enabled Android Tablet PC. The product is confirmed and will probably be announced during MWC(Mobile World Congress) 2013.

ASUS is expected to showcase a vast range of new mobile products at MWC 2013. There are even speculations of a third generation Full HD PadFone to be announced. Even though that is not confirmed, we are quite sure that we’ll at least get to see FonePad’s inception to the market.

Some time earlier, Global Certification Forum confirmed the existence of the ASUS FonePad. The website also showed that the 7-inch device will support GSM 850,900,1800 and 1900 bands.

The FonePad has a back aluminium body and is expected to be preloaded with Android 4.1.2 Operating system with both a front and back camera.

ASUS FonePad is one of the firsts x86 based tablet on the Android platform. x86 based smartphones haven’t attracted much attention to the average consumers. Could Intel’s 2nd attempt at the tablet pc android platform market be a success for them? 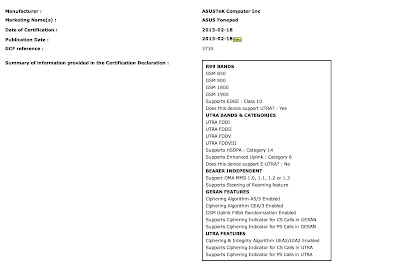 [Technical Overview] UEFI VS Traditional BIOS Boot : What it means to you?