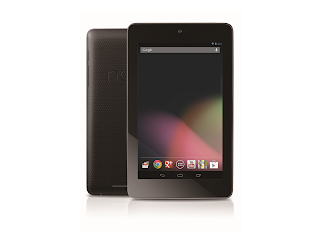 Singapore (20 December, 2012) — Starting
21 December, the Nexus™ 7 32GB 3G
model will be available at S$499. Customers will still be able to purchase the
16GB and 32GB WiFi models at S$349 and S$399 respectively from major electronic
specialty stores islandwide.
Nexus 7 is the first tablet in Google’s
Nexus line of devices, as well as the leading device for Jelly Bean Android™
operating system. Combining premium hardware designed by ASUS with the latest
version of Android operating system and all of the entertainment from Google
Play™, Nexus 7 is an irresistible
device for one and all in all kinds of usage scenarios.
The award-winning Nexus 7 is now more powerful and
portable than ever. With up to 32GB of storage and the option to add mobile data, users can take even more of their
favourite content anywhere and everywhere they go. The new 3G model of Nexus 7 came on the heels of its numerous
accolades, including the recent T3’s prestigious 2012 Tablet of the Year and
Gadget of the Year.
Jointly
developed between ASUS and Google, the award-winning Nexus 7 comes with a NVIDIA® Tegra® 3 quad-core
processor, which makes working on the Nexus
7 a breeze for the users – pages load quickly, gameplay is smooth and
responsive, and running multiple apps never seem any easier than before. A Patented
4-PLUS-1™ design gives users processing
power when needed, and battery saving efficiency when they don’t. Furthermore, the Nexus
7 3G model comes equipped with the latest Android 4.2, the latest version
of the world’s most popular mobile platform – featuring an improved keyboard
that helps users say and do more, new actionable notifications and updates to
Google Now, just to name a few.
Being the world’s first
7-inch quad-core tablet, Nexus 7 was
built to bring users the best of Google in a slim and portable package that
fits perfectly in the hand. Nexus 7
was made for Google Play, putting entertainment users love right in their hand:
millions of songs, thousands of movies and TV
shows, plus over 675,000 apps and games. Nexus 7 comes with all the favorite
Google Apps – like Gmail, Chrome, Google+
and YouTube – putting the best of Google
in the palm of the hand.
Super Powerful, Super Portable
With a vibrant, 1280×800
high-resolution display, Nexus 7 brings
your apps, games, books and movies to life in stunning clarity. With over one
million pixels in your hand, text is sharper; HD movies are more vivid and
gameplay is smoother and more dynamic.
All of these are protected by the scratch-resistant Corning™ glass,
designed for the whole family to pass around and enjoy at ease.
Nexus 7 is designed to give you the
best possible gaming experience. A NVIDIA® Tegra® 3
processor delivers heart pounding quad-core speed and immersive graphics
performance. It is packed with sensors like a gyroscope, accelerometer and NFC – and a
responsive 10-finger multi-touch screen means that games react to your
slightest touch. Do a barrel roll then tilt, touch and tap your way to the top
of the leaderboards while exploring over 600,000 apps and games available in
the Google Play store. At 10.5mm thin and 340g, Nexus 7 has the portability of a paperback book, but connected to
the entire digital world of entertainment.
Less Charging, More Doing
With over 9 hours of HD
video playback, 10 hours of web browsing or e-reading, and up to 300 hours of
standby time, Nexus 7 can go the
distance. Whether you measure battery life in chapters read, levels completed,
movies watched or minutes of backseat silence, you can spend less time charging
and more time doing.
Smarter Keyboard with Gesture Typing
Writing messages on Nexus 7 never seem any easier with
Gesture Typing – glide your finger over the letters to compose emails or texts
in a snap. The keyboard can anticipate and predict the next word, so you can
power through your messages on Nexus 7
like never before.
Android 4.2 Jelly Bean
Nexus 7
comes with Android 4.2, the latest version of the world’s most popular mobile
platform. Experience an improved keyboard that helps you say and do more, new
actionable notifications, updates to Google Now and much more.
675,000 apps and games
Get all the apps and
games you love on Nexus 7 – with
over 675,000 titles to choose from, Google Play has something for everyone.
From games for the kids to the latest 3D epics, you will find the most popular
free and paid apps and games on Google Play.
###
Tech Specs

Don't sit on an iPhone 5