Ngee Ann Polytechnic held a workshop on Windows 8 Development with HTML from 17th to 19th December. The beginner course introduced HTML technologies and Windows 8 application development to the participants, who then had to team up to create an application from scratch.

Some of the applications showcased

After 2 days of hard work coding their applications, a total of 14 applications were presented. Ranging from Love Calculators to Typing Games, the application which won the heart of the judges and voters was a DJ Music App from Team BIT.

BeatPad is music mixer application which allows you to be creative and create your own music track on the fly with the preloaded tracks. With a countdown timer at the side of the application, BeatPad makes sure that all the concurrently playing audio tracks will synchronise and sound professional. It give users unlimited fun and entertainment with numerous possibilities of ways the music tracks can be mix and matched.

Even though BeatPad was only created in a short 1.5 day timeframe, the judges were impressed with the amount of work done by the team to come up with such a polished product. However, judges also suggested that a better usage of space in the application could probably make the application look better. Another judge also recommended them to include a record and save feature for their music creation to attract more downloaders.

The winners walked off with a DiRT 3 – Showdown game as well as Wireless USB mouse for each member. Congratulations to Team BIT! 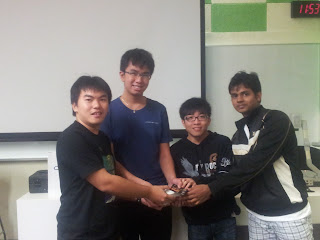 Once again, here at The Tech Revolutionist, we would like to thank all the participants for their commitment and enthusiasm throughout the workshop. At the same time, we would also like to thank Microsoft Singapore for their support and provision of meals for the workshop. I hope that everyone learnt something useful, and would bring their skills to the next level by creating more applications. 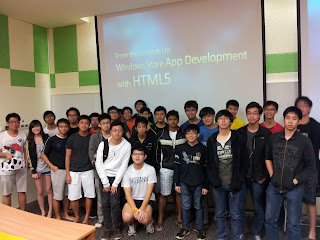