Intel kills off the desktop, PCs go with it
Analysis: Broadwell has no socket, PCs have no relevanceNov 26, 2012 in analysis
by Charlie Demerjian 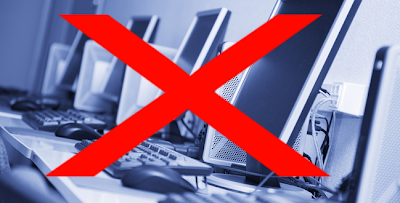 Intel is killing the desktop, but not quite as soon as people expect it to, there will be one last gasp, but that is irrelevant. Word is finally leaking there won’t be a desktop PC chip in a bit over a year.
In a story that SemiAccurate has been following for several months, Broadwell will not come in an LGA package, so no removable CPU. The news was first publicly broken by the ever sharp PC Watch, english version here, but the news has been floating in the backchannel for a bit now. The problem? This information wasn’t floating around the OEMs or the majority of the PC ecosystem, they had no clue. What does all of this mean? Quite a bit.

The most direct effect is that of Broadwell, the 14nm successor to next year’s Haswell CPU, will essentially shut out the enthusiast. Motherboards will still be available, but the CPUs that come with them will be soldered down. In addition to being a inventory management nightmare, OEMs won’t buy CPUs any more, the few remaining mobo vendors and ODMs will. As a side effect, it also cuts the enthusiast out of the picture for good, but more on that later.

Normally, you would expect Intel to tell the companies that are affected, the Asuses, Gigabytes, MSIs, and maybe Asrocks if they are still around, well ahead of time. This time Intel didn’t, and that should tell you a great deal about their intentions. At least a few key PC players found out from SemiAccurate a few months ago, and they were rather incredulous about the news. This state of mind has probably changed to a state a bit past peeved by now, their entire business is about to be gutted. Intel didn’t just do a bad job of messaging this one, they didn’t do any job of it.

Will Intel cut out the mobo makers entirely and just do everything themselves? Grabbing more of the pie seems to be their forte of late, but cutting out everyone but the physical assembly guys seems to be a bit of a stretch in the short term. SemiAccurate suspects that this decision has not been made, but expect Intel to gut the mobo makers influence one way or the other, they are currently seen by Santa Clara as having too much power. This is not going to be pretty no matter how it ends up.

That brings us to the next issue at hand, enthusiasts. They are pretty much dead, not that Intel seems to care. Since they nearly destroyed that nascent market with Nehalem, and have since progressively removed any features the enthusiast cares about while jacking the cost to buy them back to untenable levels, enthusiasts have become an endangered species. Unfortunately Intel doesn’t care about the enthusiast, and unsurprisingly they have moved on. ARM chips are now the focus for that crowd, and they are taking the mainstream geeks with them. Broadwell will end it for good, but….

SemiAccurate has been chasing the last bit of this story for several weeks, there is a very good chance that Broadwell’s successor, Sky Lake, will bring back a socketed CPU. Unfortunately it will only be for a generation, possibly two, nothing permanent. By then, the last remaining overclockers and experimenters on the PC front will be gone, and for good technical reasons. Increasing integration will make this minor backpedalling step a rather moot point, there won’t be anything left to tweak, and any headroom will have been screened out at the fab prior to fuses being blown. Worse yet, margin requirements will effectively make it not worth extreme cost. Haswell is the end of the line, if Sky Lake does backpedal a bit, it will be a form factor change only, not a philosophical one.

And so the PC ends with a whimper, not a bang. Broadwell will be available in a ‘desktop’ variant as well as a laptop version, but neither will be socketed. There are a lot of good technical reasons to release it only as an embedded and mobile CPU, but not for anyone other than Intel. They want more of the PC ecosystem, and are taking it. Enthusiasts have been written off, and the rest of the ecosystem is being preemptively kneecapped in case they try to step out of line. The desktop is dead, and with it, PCs become irrelevant, mobile or not.S|A

Updated 11/26/12@3:25pm: One point to add, two OEMs have confirmed to SemiAccurate that they have now been briefed that Broadwell is BGA only. This was done weeks after we first told them about the problem.
Source: Semi Accurate