As you all know, it’s
that time of the year again. Black Friday was over a few days ago on the 23rd
and Cyber Monday has also just passed. As we step into Tuesday, one must note of
course that games are also a hot topic. The end of the year is approaching and most gamers know what that means: Game Sales. A lot of game sales. As usual, consumers find themselves spoilt for choice and begin to wonder as well: What
games do I buy? Where to I buy them for the best deal? And more importantly, is
the game worth it? Well, I’m here to give some insight
to a few games you might want to check out for the 27th of November
2012 on some popular online game distributors. Of course, this is all subject to personal opinion, so please
take what I write with a grain of salt, or more if you feel so inclined to.
So the first place we
are going to be talking about is the huge elephant in the room, steam. As you all who follow steam know, the autumn sales
are now underway and there have been tons of different deals on the front page
each day. We are currently at the final day of the autumn deals and despite
that, there are some delicious looking titles up for grabs. So what’s good for today? 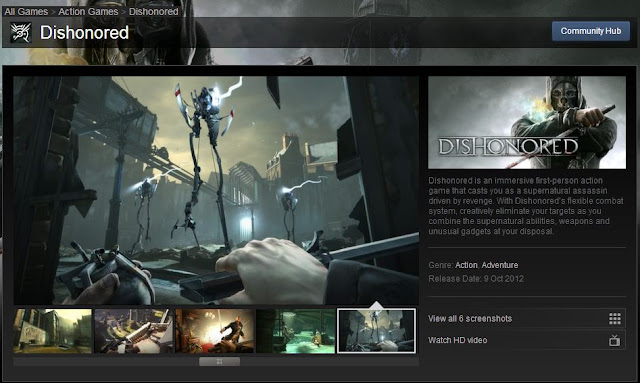 Well, currently the most obvious one most people would be looking at would be the 50% price slash on
Dishonored, which is on sale pretty quick after its initial launch early last
month, but hey, it’s a good time to milk it down for cash. Value for money of this game is a dicey issue to discuss. It has gotten good reviews across the board but has also been criticized for its
fairly short gameplay.

Personally, I’ve played through it and I find it a somewhat
quick but satisfying experience for a full priced release. I’ve heard of people
who speedrun this thing and claim that it can be cleared in 8 to 10 hours or
less. Cutting the price in half, though, might tempt more people to actually be
interested in it.

I can’t really encourage people who want incredibly long games
and lack interest in self-exploration to purchase this because you will derive
a lot of your fun here from re-doing areas, experimenting with different
abilities to get through each individual area as well as finding different
types of collectibles.

If you like playing a stealth action game which is
extremely well polished and you have a reasonable PC, also bearing in mind that you are okay with purchasing a game that does offer a lot in a different way, you’d probably want to pick
this one up, seeing as it’s also an excellent PC port with an FOV slider, good
graphics options and re-bindable keys. 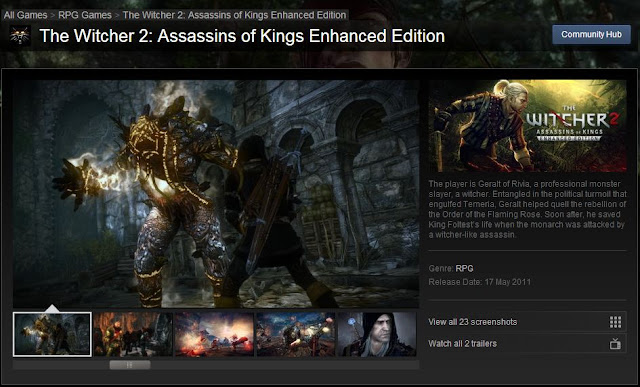 The next title is the
Witcher 2: Enhanced Edition. So, what’s this? One might ask. Well for those who
still don’t know this game, it was released by CD Projekt RED, a company who
made it quite some time back, who also started the site GOG.com, which
specializes in reviving old PC games such as Giant Citizen Kabuto and Fahrenheit/
Indigo Prophecy to make them compatible with current PCs running on newer
operating systems, as well as selling their own titles and other small indie games, all DRM-free of course.

This is one of those games mostly meant for a more mature
audience. It is dark, it is gritty and it tells an amazing story of a
particular Witcher named Geralt, a monster hunter who has special powers.
Unlike games like Mass Effect where you generally choose between “good” and “bad”
choices (Let’s face it, it’s pretty obvious no matter what fancy words you
label over them), you tend to make a ton of decisions that either have an unknown or adverse effect later on which generally puts you in a rather grim mood. Witcher 2 does not cover hard truths up and bares its ugliness for all to see. The game is no simple walk in the park either. It is fairly hard and one
has to really plan his battles beforehand instead of simply running forward
like some superhuman slicing through 300 people in a single cleave and roaring with laughter. You’ll find yourself using almost everything the game offers to try to work around complex situations.

The game is also pretty old. It was released last year in May, but has gotten “enhanced” indeed, with the new edition being free of charge and adding approximately 4 more hours of content and some extra cut-scenes, bringing the gameplay time up by a fair bit over its original 50 – 100 hours worth, which makes the game pretty damn worth the price currently, so if you don’t already own this game, you’d probably want to get it now. 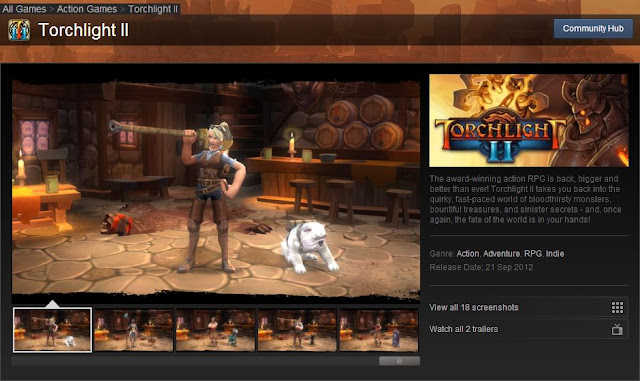 Another title worthy
of mention would be torchlight II. This is an amazing game worked on by Runic
Entertainment who have created a highly polished and very much so comparable
experience versus Diablo III which came out earlier on this year. It sounds like
I am biased and yes, I am. I don’t see eye to eye with it in several areas, but
of course, this is not the place for comparison. At 9.99 USD on the current
sales, this game is definitely worth every cent, spanning 3 long acts (4 if you
count the final area as an entirely different act) with a huge variety of
enemies, modding capability, new game plus… the list goes on and on and I
cannot fault the game on much at all aside from the fact that it is obviously
still a repetitive grindfest, which is undoubtedly the flaw of the ARPG genre itself. But if you’re looking for something out there in the
ARPG genre that’s not too expensive and good value for money, this would be the
game of choice. 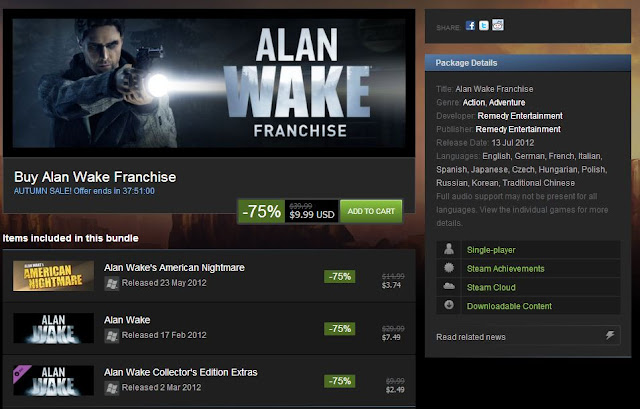 Alan Wake sits on the
front page and people probably don’t know this all that well but it’s actually
one of my personal favorites. It’s an Action Horror game that was released back
in May 2010 by Remedy Entertainment as an Xbox 360 exclusive title after a
horribly long delay period of nearly 5 years. The PC version only came out
early this year but I consider it forgiven for providing an excellent port.

This
game has an interesting plot and some very heavy elements of constant
foreboding and mystery surrounding it. You play a writer, Alan Wake who has been suffering
from writer’s block. Your wife brings you on a vacation and eventually gets
kidnapped. Unable to deal with the pressure, you fall into depression and that’s
where things happen and people start dying. Your stories come to life in the
form of murderous black figures in the dark and the constant mystery behind
what is really going on is what keeps the player going. Currently selling at
9.99 USD for both the game and the spin-off “American Nightmare” which focuses
more on the shooting aspect of the main game but is equally entertaining, this
is a pretty good price point if you are looking for a game with horror elements and a creepy night-time atmosphere. It won’t
offer the same Amnesia-esque experience where the atmosphere is as intense but can definitely provide you with some good scares and quality story-driven gameplay.

GamersGate is also
currently having a massive sale with a large collection of games going on sale,
including steam titles and non-steam titles. Now needless to say, the prices
change at 4 P.M. GMT +8 everyday as new titles are put on double discounts so just
note that this was written and published well before 4 P.M., meaning some
prices may be subject to change once the deals of the day refresh. 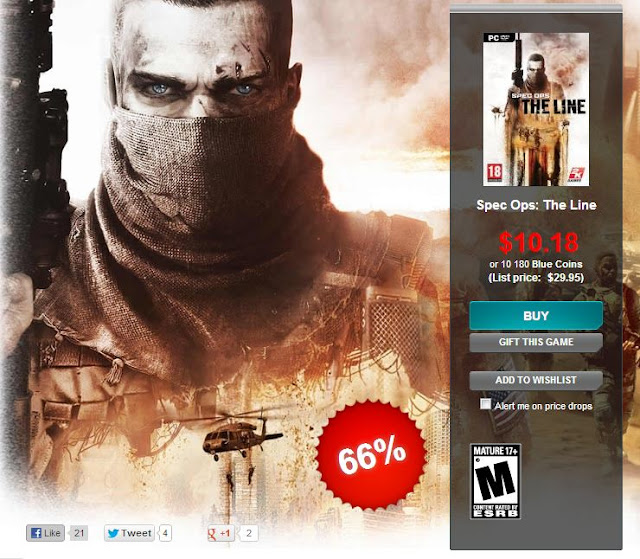 A notable game on huge
discount would be Spec Ops: The Line. Now at face value it looks like one of
them “Call of Duty clones”. It actually isn’t. It has some of the most amazing
sand I’ve seen for a game, that’s for sure. The single player campaign is the
core element of the game and despite being only a few hours long, I’m sure you’ll
spend longer than that due to how disturbing and dark it is. The multiplayer is
surprisingly competent and plays out very well as a good third person
multiplayer experience with sandstorms despite all the negativity it received.
The multiplayer scene is sadly not as active as I would have hoped for, but I
would say that at the low price point it is currently at, pick this game up
just to run through the single player missions because I feel the game is
underrated and I would hate to see it go down just like that. The voice acting
is incredible and, once more, I just love the gorgeous (and destructive)
sandstorm effects in the game.
http://www.gamersgate.com/DD-SOTL/spec-ops-the-line
Current Price: 10.18
USD (Usual Price: 29.95 USD) 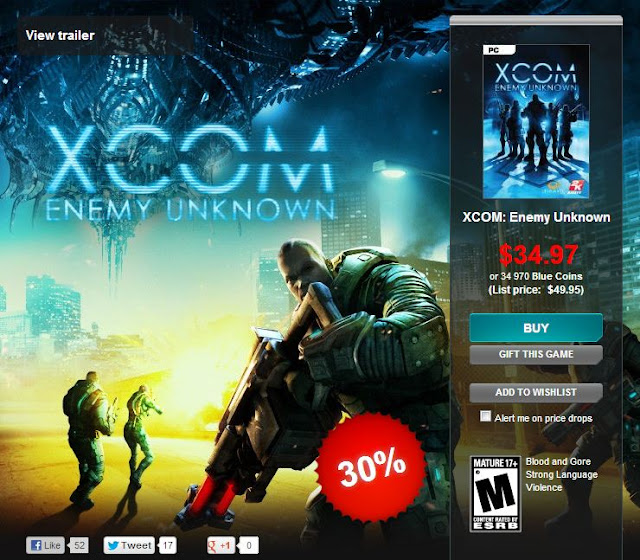 One last but certainly not least title to
ponder over would be the recently released XCOM: Enemy Unknown.

Now, for those
of you who don’t know what XCOM is, you should probably go drown yourself in a
barrel of acid because it is one of the most well-known hardcore strategy games
in the gaming market. I played the old XCOM series and it was amazing. But how
does this remake size up to its predecessor? Well, some things go and some
things change, of course. We don’t get ridiculous amounts of soldiers to deploy
anymore and the inventory system has been dumbed down, to my great disappointment. Base defense
has also been removed, but overall, maybe it’s just because strategy games like
this have not been released for some time or that I really just love the XCOM franchise, I tend to find myself feeling more defensive when talking about the
series.

I do enjoy the game overall and find it a welcoming addition to the brutal
and unforgiving series. The game does have a fairly long and tense single player campaign and the multiplayer portion does show promise, allowing one side to play the aliens, although I’m not sure if it’s as balanced as intended to be for now.

Although there are still bugs here and there, it’s
better now that there has been patching in an attempt to fix some of the
problems, though not all, some of which can be really annoying. Overall, if you
like strategy games like final fantasy tactics or ogre tactics and the like, or
if you’re someone who’s even mildly curious about this title, I’d recommend you
to pick it up. It does involve decision making and luck and you definitely
better be playing at least on classic ironman mode where there’s no going back
(only one save file) or you’re definitely doing it wrong.

http://www.gamersgate.com/DD-XCOMEU/xcom-enemy-unknown
Current Price: 34.97
USD (Usual Price: 49.95 USD) + 3.49 USD for the Elite Soldier Pack, a
small DLC
package which isn’t needed unless you’re into visual customization
Well, that was a
pretty long round-up of PC games you might want to buy for this crazy sale
bonanza going on right now. Obviously, there are many, many good games
constantly going on discount on other sites like GetGamesGo, greenmangaming etc. etc.
and it’s impossible to cover them all or I’d be a lot older by then, not to
mention that some of the sites tend to have almost the same offers or have ever so slightly varying price points. However, these are my personal choices if you
are looking to get a triple A title and are running on a limited budget, which
happens to be most of us, I would assume. That’s all for this time. See you guys soon! (Provided I get more toilet paper in the mail)

10 Illusions that will blow your mind away