What to do with $300 in your hands if you have a choice of Intel and AMD processor? 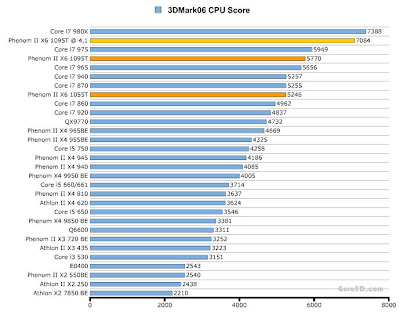 The Phenom II x6 1055T is a hexacore processor. This means that it has actually 6 physical cores on the CPU chip itself! Imagine that, processes that require CPU time will not go through one by one through one CPU core but 6 at a time! At a mainstream platform, there are currently 3 processors that make use of a hexa core architechture. They are 1090T and 1055 T from AMD, while from Intel, we have the Core i7 980X. Phenom II x6 1055T is the most affordable in the 3 while the 980X is almost 5 times the price of the 1055T. Imagine that! $1.5k! Who could afford that kind of price?

With true 6 core processing, multi-threaded applications will leverage on the hexacores available on the Phenom II x6. Your processes will be processed so much quicker compared to your previous dual or quad core.

You may be wondering what does the T at the back of the model number of 1055T means. AMD somehow copied Intel’s turbo boost technology and came out with their turbo core technology. There may be a difference between the two kinds of technology. Looking at Intel’s turbo boost, there is an increase of one multiplier of the CPU up, increasing the processor speed of all the cores. While for AMD turbo core technology, only certain cores frequencies are increased so that voltage specifications of the processor itself will be will met. The Phenom II x6 1055T processor will go up to 3.3GHz per core. That is the solution to tackle the problems of those single threaded applications.

No doubt that Phenom II x6 is one powerful processor. With a powerful processor, you may expect a hot chip, however, the 1055T only has a TDP of 125W of the older revision, but the newer revision has a TDP of 95W! Crazy! Imagine a hexacore processor powering your desktop at home while fans cooling it are silent. You’re working in a noise free environment, with distractions aside, allowing you to fully concentrate on your computing works. The new revision for Phenom II x6 1055T will be desired by the miniITX users. Mini-ITX motherboards are largely limited by the support for high TDP processors. 1055T is certainly one overkill solution for a miniITX platform. One small casing with one powerful processor together other hardcore components, you’ll be ready to frag the others at LAN Parties.The low TDP can be accounted for the 45nm fabrication process, together with improved architecture in the new Phenom II x6 lineup from AMD.

Backwards compatibility with AM2+ motherboard is what  wins over Intel’s architecture. However, the aging architecture should soon be refreshed to meet up with higher demands from the consumer market in the future, but it is sufficient for the current platforms now.

The use of Thuban cores which originates from previous server based opteron processors in the Phenom II x6 provides the desktop computing needs that you need for your hardcore applications. Furthermore, Phenom II x6 processes are great for overclocking even with the stock cooler. I managed to push mine up to 3.4GHz with no problems at all.