In the past, the high-end segment of the graphics card market was largely dominated by NVIDIA, as AMD didn’t have a product that was up to par. This time, with AMD’s introduction of their RDNA 3 GPU architecture and the release of these two new graphics cards, it seems like the market dynamics are going to change.

In this article, we are going to take a look at the key features of RDNA3, and how they were able to bring about improved performance for AMD’s graphics card. Of course, we will also look into the latest AMD Radeon RX 7900 XTX, Radeon RX 7900 XT, and NVIDIA RTX 4080 to see how each of these products performs as compared to one another. 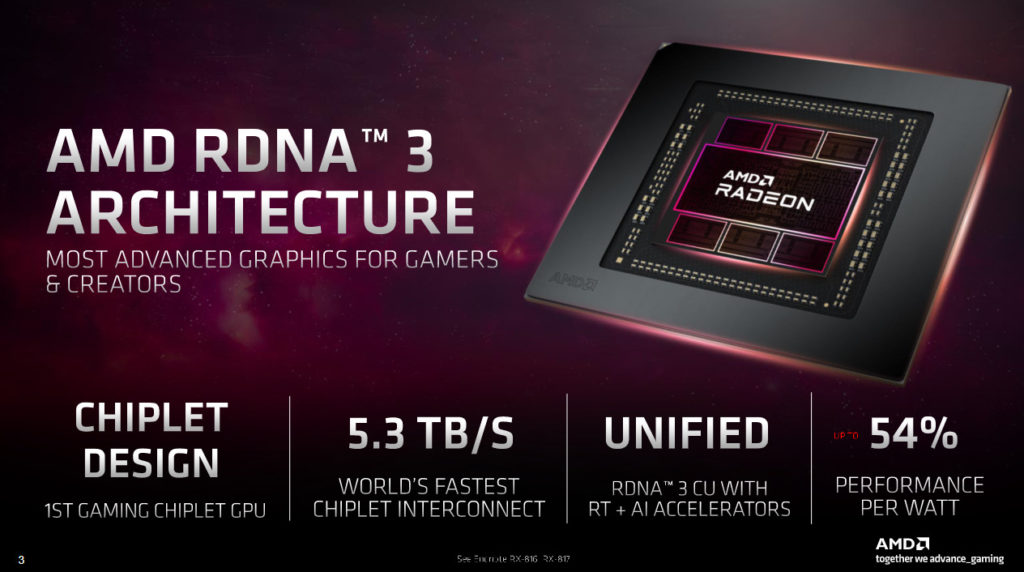 For the first time, the chiplet architecture design is introduced on a GPU. A chiplet architecture allows the use of a modular approach to best optimize the efficiency and performance of an overall design. It was first made popular with AMD’s Ryzen processors, which has given them much success in the CPU space.

On the GPU side, AMD is separating the Graphics Compute and Memory components of their IP. In particular, for RDNA 3, the Graphics Compute Die (GCD), which focuses on the core graphics processing of the whole GPU, is based on a 5nm design. This contains all the shaders, display engines, and a brand-new media engine. On the other hand, the Memory Cache Die (MCD), which is built on a 6nm technology, features GDDR6 controllers and 96MB of 2nd generation Infinity Cache. AMD also designed a new chiplet interconnect that allows a bandwidth of up to 5.3TB/s between the GCD and MCD.

With this new design, the new RDNA 3 graphics cards are able to achieve a 53% performance per watt improvement over predecessors. Technicalities aside, let’s take a look at the performance that RDNA 3 brings. 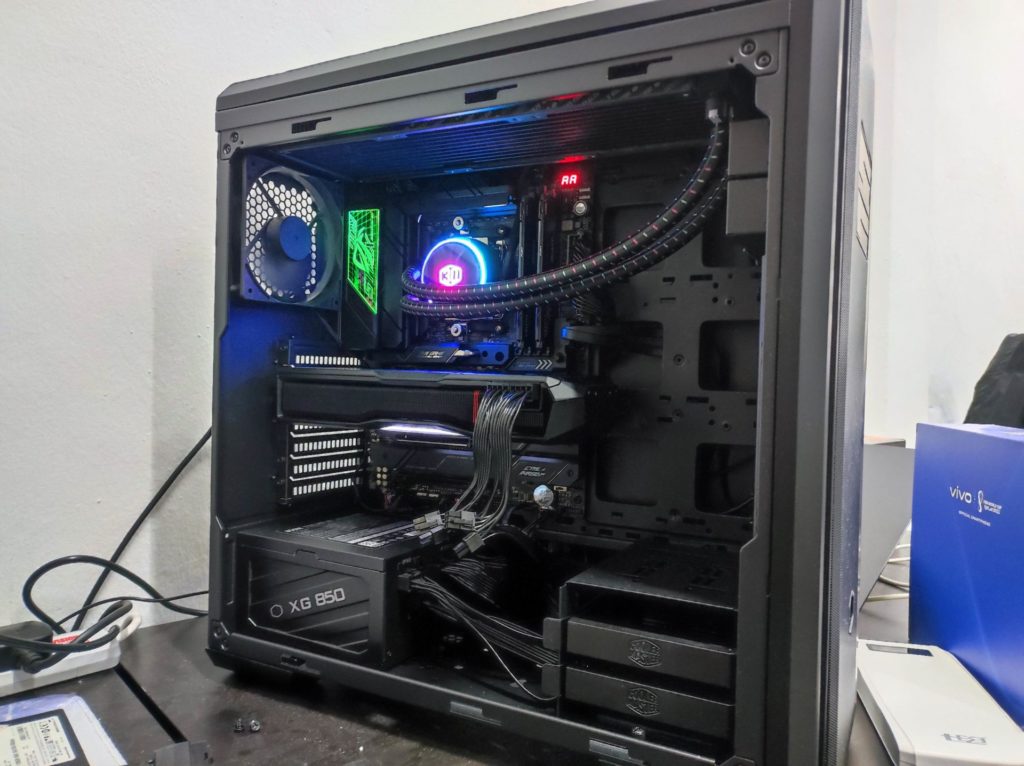 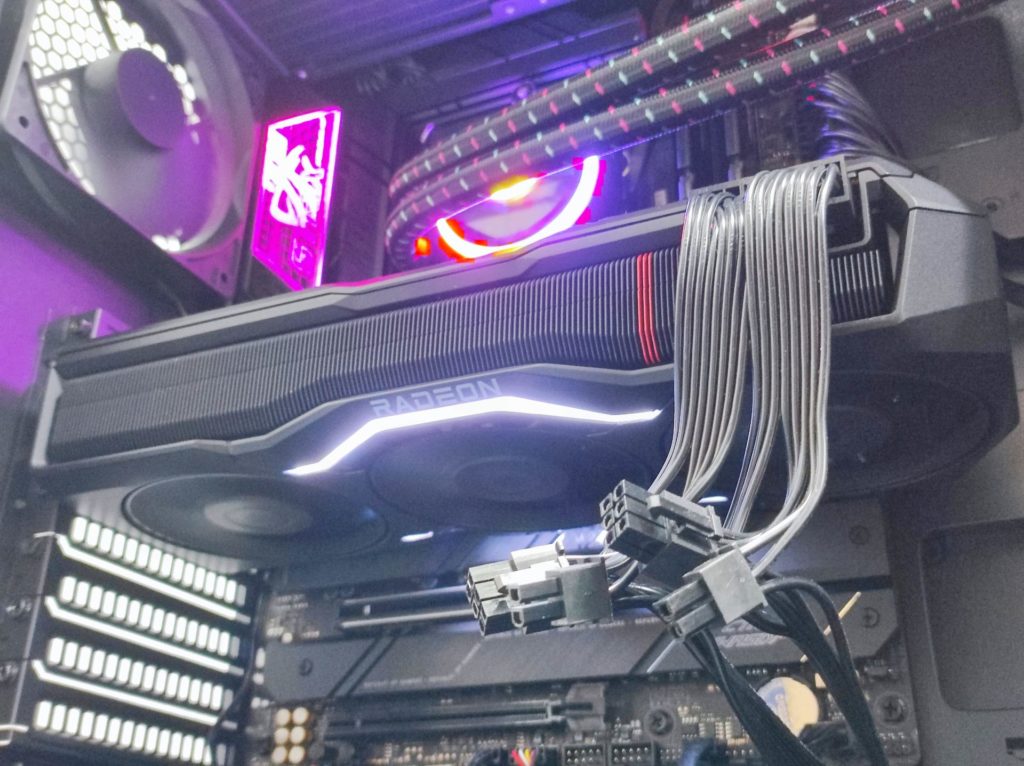 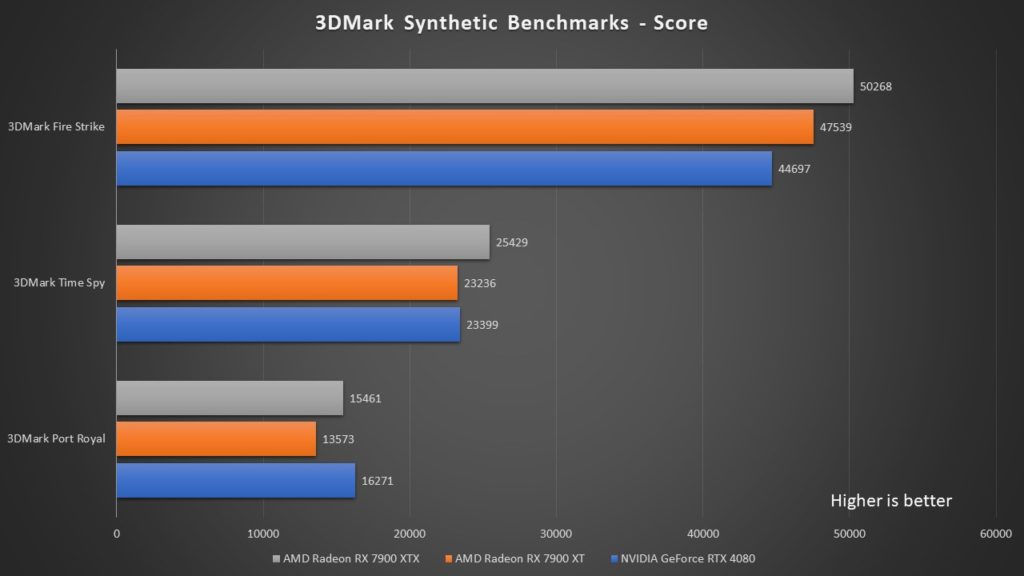 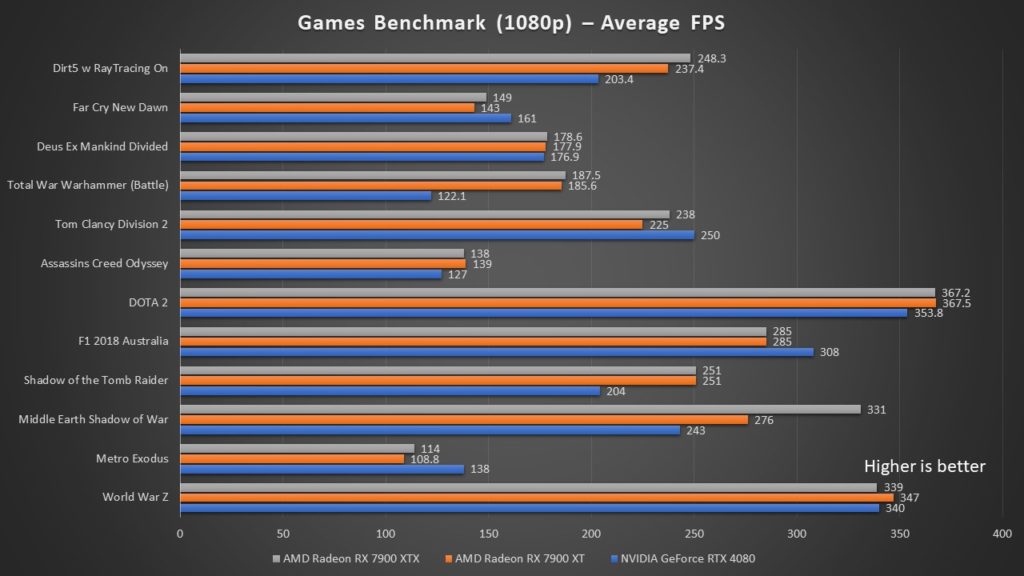 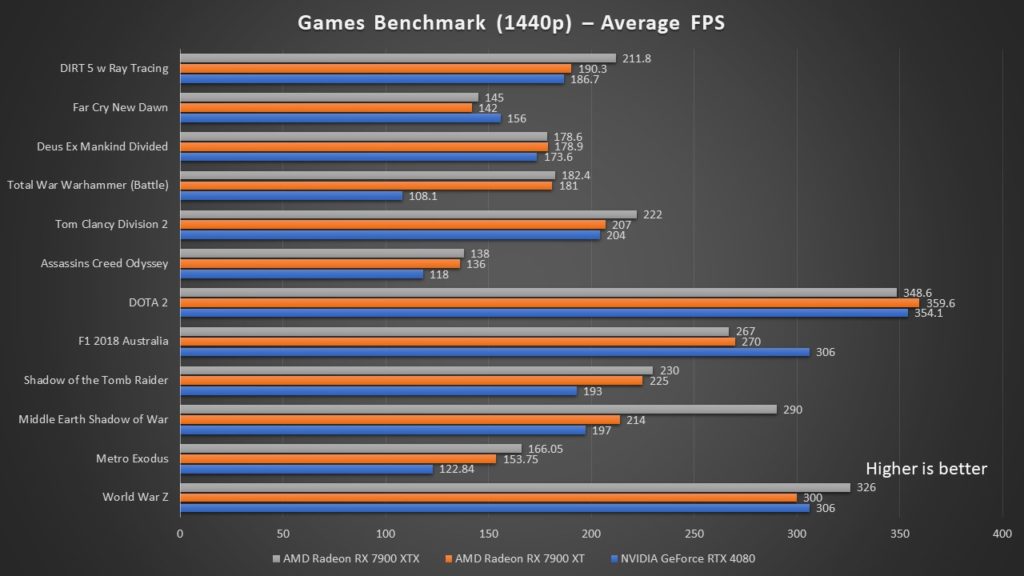 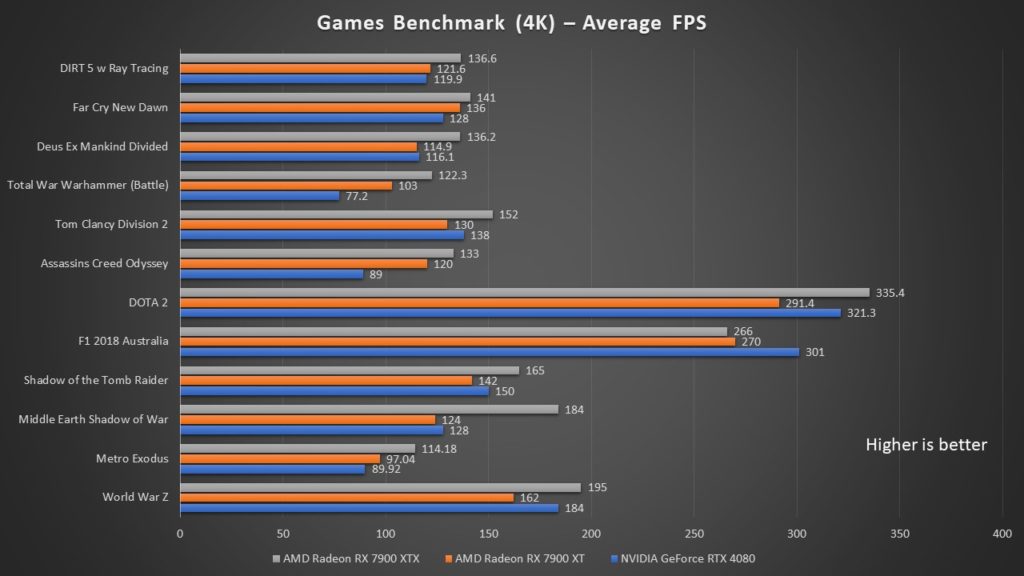 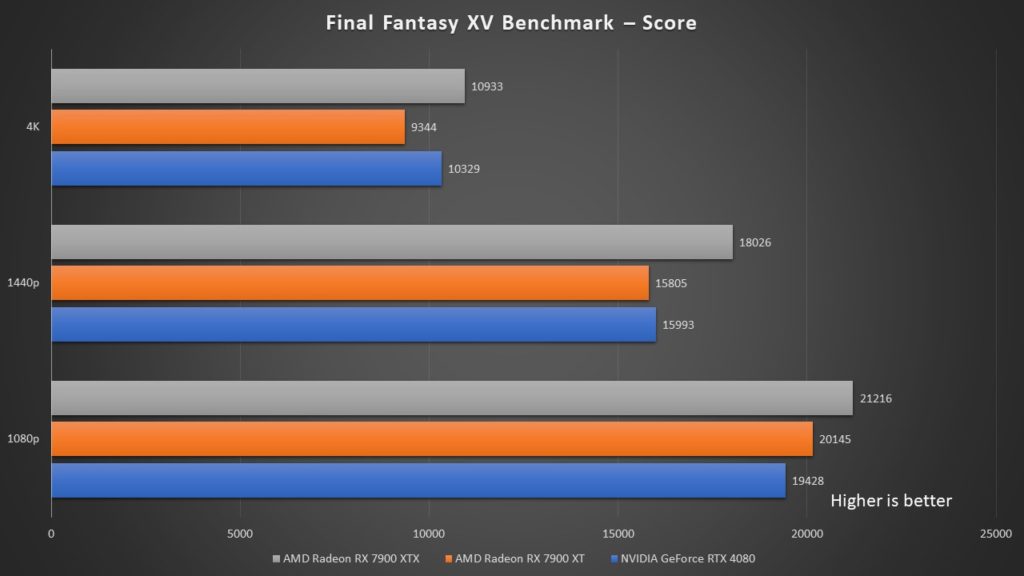 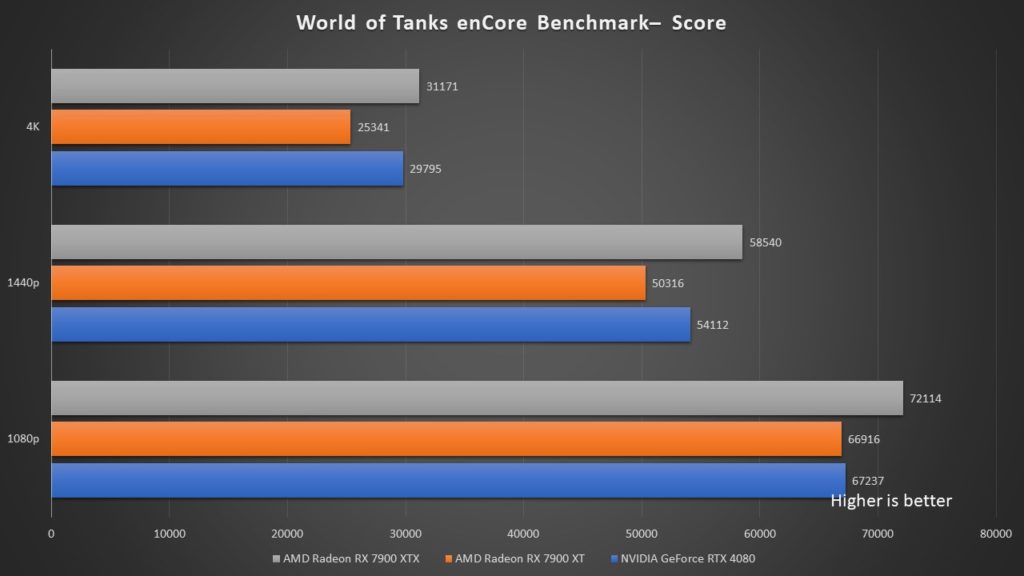 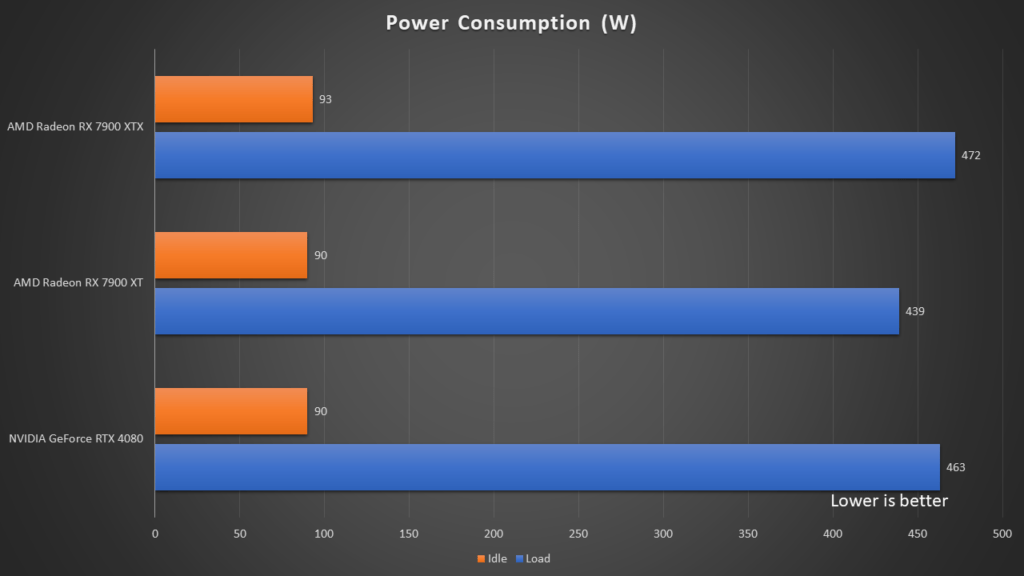 All cards had quite a similar power consumption while idling. 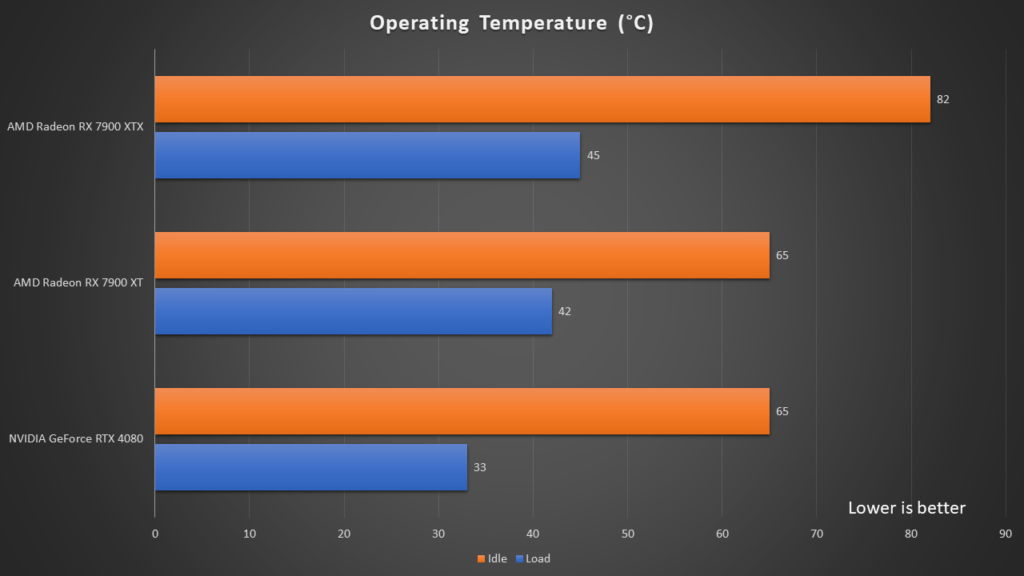 Even when stressing the Radeon RX 7900 XTX and RX 7900 XT, both cards managed to stay within their thermal limits. Even though the RX 7900 XTX was quite toasty, it still managed to cool itself properly without ending up thermal throttling. Its cooler was more than capable of properly keeping itself cool. 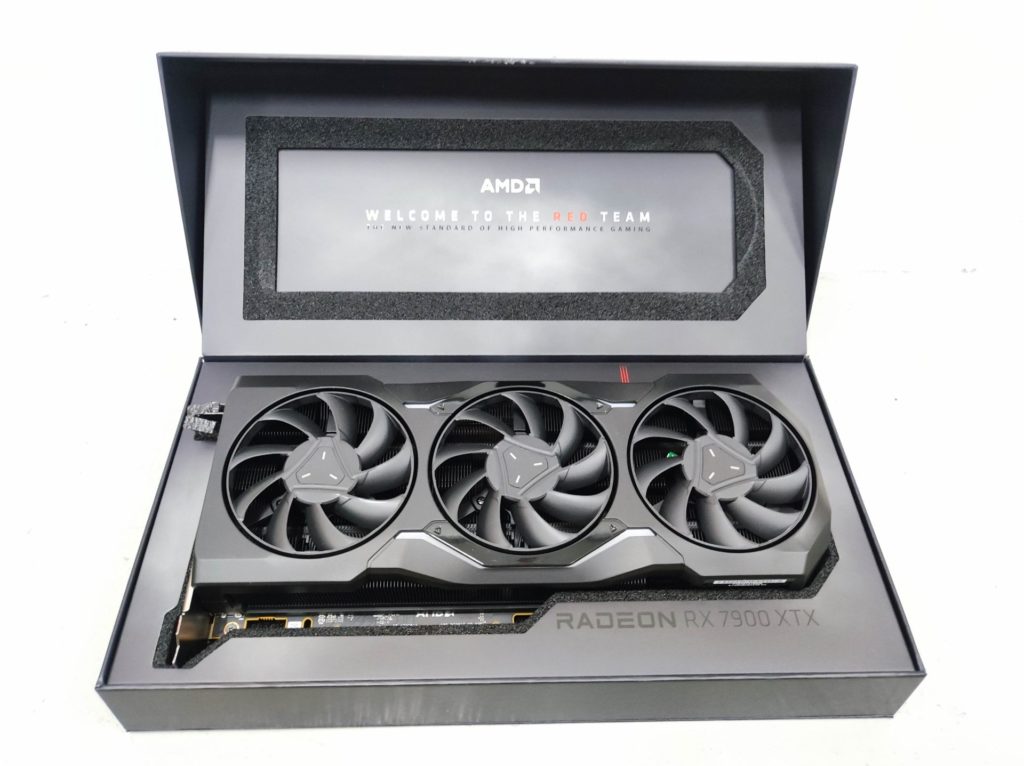 The AMD Radeon RX 7900 XTX has certainly met our expectations of being a decent performer in the high-end graphics card segment. It trades blow with the new GeForce RTX 4080, even outperforming it in many of our tests. Judging that the RX 7900 XTX retails at an SRP of $999, while the RTX 4080 is priced at $1199, it’s a no-brainer for those seeking brute performance to opt for the Red Team’s flagship – Radeon RX 7900 XTX.

The little brother, Radeon RX 7900 XT, also packs a punch in pushing out high frame rates. If you take a closer look, you would see that this card is still perfect for gamers who want to game at 4K resolution. Perhaps, the RX 7900 XT is a more sensible choice, as it’s cheaper at a price of $899, and has already got all you need to drive those high-resolution displays. Moreover, with technologies such as the AMD FidelityFX™ Super Resolution technology, there is no doubt that you can play any PC games you would want on it.

Both AMD Radeon RX 7900 XTX and RX 7900 XT are great additions to AMD’s graphic card lineup. There is no doubt that both products live up to their hype, and were shown to perform outstandingly. We do recommend both graphics cards for a new PC build or a PC upgrade if you are looking to play the latest games on a high-resolution display.

We’re simply excited with the fact that AMD is finally able to produce a graphics card that comes close to the performance of what the competition’s flagship provides. Certainly, the competition in the graphics card market is getting heated up as well. We can’t wait to see more products and solutions from both the red and green camps for the mid to high-tier market segment.

Creative Zen Hybrid Review: Is it Zen Upon Zen?