Singapore, 5th Jan, 2022 — Republic of Gamers (ROG) today announced a battery of new gaming products at the CES 2022 ROG: The Rise of Gamers launch event. ROG is proud to be at the forefront of technology, and to once again introduce exciting new products for an age where gaming is no longer a fringe hobby, but the zeitgeist of today’s technology. ROG is ready to hit the ground running in 2022 with a new operating system, brand-new CPUs from Intel® and AMD, GPUs from AMD and NVIDIA®, as well as an all-new form factor.

The brand-new Flow Z13 gaming tablet brings a new level of portability and versatility to PC gaming, and the updated form factors of the Zephyrus Duo 16, Zephyrus G14, and Strix series improve on a set of already-world-renowned products. ROG also announced new accessories in the Archer series of gear bags and a new update to the free ROG Citadel XV digital experience, where all the new products are available to gamers to explore.

NVIDIA GeForce RTX™ laptops are based on the revolutionary Ampere architecture, with 2nd generation RT Cores for ray tracing and 3rd generation Tensor Cores for DLSS and AI.

The new GeForce RTX 3080 Ti Laptop GPU brings the flagship 80 Ti class of GPUs to laptops for the first time. Featuring 16 GB of the fastest GDDR6 memory ever shipped in a laptop, the RTX 3080 Ti delivers higher performance than the desktop TITAN RTX. The new GeForce RTX 3070 Ti is up to 70% faster than RTX 2070 SUPER laptops and can deliver 100 frames per second at 1440p resolution. 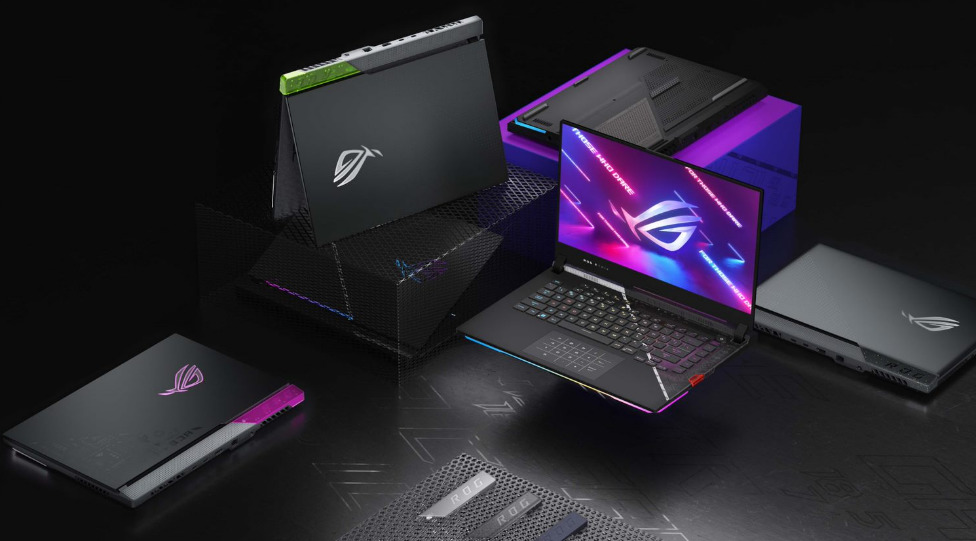 All Strix models are equipped with a quad-speaker design and Dolby Atmos® spatial sound, which brings soundstages to life with immersive, crystal-clear, and lifelike realism in the heat of battle. Two-way AI Noise Cancelation filters out background noise for both ingoing and outgoing communications, so everyone’s voice comes through loud and clear.

The critically-acclaimed ROG Zephyrus G14 is a powerful gaming machine in a stylish, ultraportable form factor with a host of new improvements for 2022. The new G14 comes with Windows 11 onboard, an AMD Ryzen 9 Series processor and AMD Radeon RX 6000S Series mobile GPUs. The laptop also features a MUX Switch to deliver outstanding performance and the best possible framerates. ROG Intelligent Cooling with liquid metal and a custom vapor chamber ensures excellent sustained performance from these high-end components, while DDR5 RAM and a 1 TB PCIe SSD enable responsive multitasking across the system.

Designed to offer premium power in an ultraportable package, the sleek G14 is available in Eclipse Gray or Moonlight White, featuring a Prismatic Logo nameplate with a holographic, reflective hue that’s sure to turn heads. The lid is also covered with 14,969 precision CNC milled holes with 1,449 mini LEDs on models with the now-iconic AniMe Matrix™ display — that’s more LEDs than last year’s model, making for new animation possibilities that customize the look of the machine.

The G14 is also one of the first ROG laptops to feature ROG’s brand-new Nebula display, which offers 120 Hz at QHD with 500 nits of peak brightness, 100% coverage of the DCI-P3 color gamut, and a 3 ms response time — with Dolby Vision, Adaptive-Sync, and Pantone® validation for a stunning, color-accurate experience that minimizes stuttering and tearing. The display has been expanded to a 16:10 aspect ratio, which increases screen real estate without sacrificing portability, since its small bezels offer a 91% screen-to-body ratio.

Dolby Atmos, a 3D mic array with two-way AI Noise Cancelation, and blazing-fast WiFi 6E round out this portable powerhouse. The ROG Zephyrus G15 and M16 have also been refreshed with the latest hardware from AMD and NVIDIA, DDR5 RAM, and WiFi 6E. 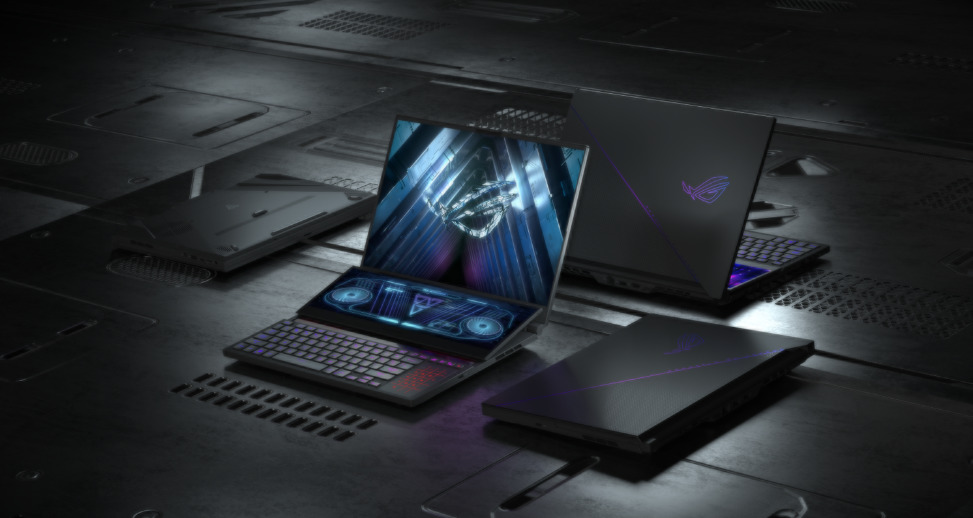 The 2022 ROG Zephyrus Duo 16 reaches new heights of innovation in dual-display laptops. ROG’s ScreenPad Plus™ adds a secondary screen for extra productivity real estate, streaming gameplay, or even controlling supported games like Dying Light 2. The ScreenPad Plus rises up and slides back to meet the primary display as the laptop opens, thanks to a new 4-directional hinge. Compared to the previous generation, this closes the gap between the two displays, providing a nearly bezel-less experience for true immersion.

This Windows 11 machine is powered by an AMD Ryzen 9 6980HX processor and an NVIDIA GeForce RTX 3080 Ti laptop GPU at 165 W with Dynamic Boost for high-end horsepower, bolstered by an upgraded Liquid Metal Conductonaut Extreme that decreases CPU temperatures by 15° C compared to traditional thermal pastes. The AAS Plus 2.0 air intake created by the raised secondary screen creates 30% more airflow above the fans, allowing these top-tier components to stay cool for better sustained performance in games and creative apps. A MUX Switch ensures gamers get every frame possible in competitive scenarios.

The Zephyrus Duo offers two groundbreaking panel choices for the main display, and supports Dolby Vision in both options. The first, new for 2022, is ROG Nebula HDR, which has all the specs of ROG’s standard Nebula Display but with 512 mini LED dimming zones, able to reach 1100 nits of peak brightness for stunning levels of contrast and color. This QHD, 16:10 panel boasts a refresh rate of 165 Hz and is VESA DisplayHDR™ 1000 certified with a 100,000:1 contrast ratio. For the ultimate HDR gaming and movie-watching experience, Nebula HDR is the display to beat.

The second, co-developed with BOE, is a brand-new ROG-exclusive display called a Dual Spec panel, which is able to switch between 4K 120 Hz and Full HD 240 Hz, allowing gamers to choose whether to prioritize resolution or framerate on a game-by-game or app-by-app basis. Pixel Acceleration Technology ensures lightning-fast upscaling in the Full HD mode for crystal clear images at competitive framerates.

This incredible device also comes with ROG’s NumberPad technology on the trackpad, a keyboard with 1.7 mm of travel and per-key RGB, six speakers with Dual Force-Cancelling Woofers, Dolby Atmos, Hi-Res audio, and two-way AI Noise Cancelation to round out ROG’s flagship for 2022. Despite this much tech and two displays, the 2022 Zephyrus Duo 16 has a smaller footprint than the previous generation, fitting a 16-inch display into a chassis traditionally sized for 15-inch laptops. 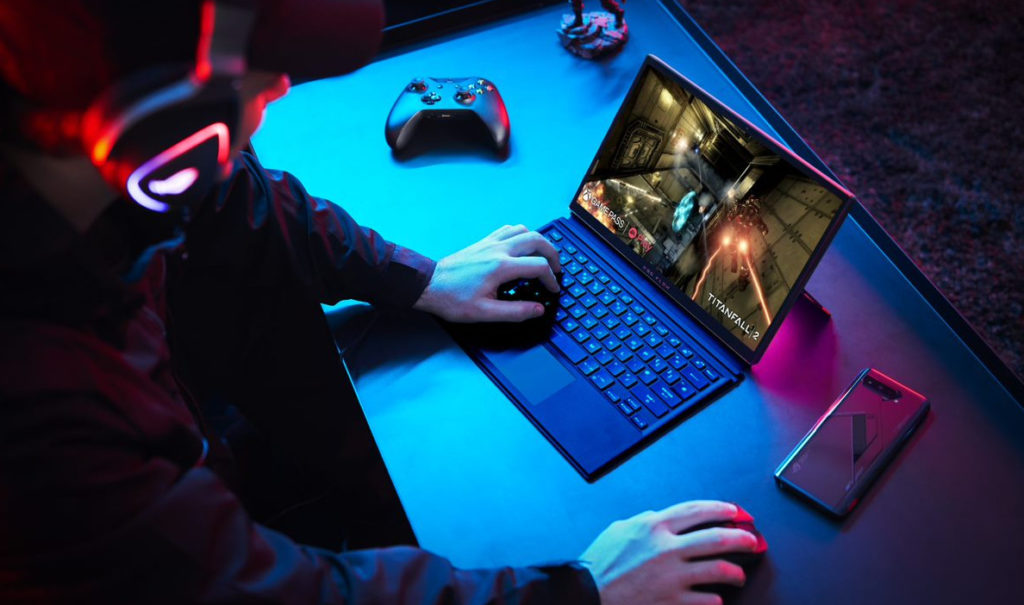 The ROG Flow Z13 shrinks the compact Flow series even further with the world’s most powerful gaming tablet. With Windows 11, up to a 14-core Intel Core i9-12900H, an NVIDIA GeForce RTX 3050 Ti laptop GPU, and 5200 MHz LPDDR5 memory, this tablet packs plenty of gaming horsepower in an ultrathin and light chassis. These specs are further bolstered by 1 TB of PCIe SSD storage, a MUX Switch, custom vapor chamber cooling, and fast charging via USB Type-C.

The Z13 can be played multiple ways, from traditional mouse (using the included screen cover keyboard) to touch input or gamepads. Since the tablet form factor includes all the powerful components behind the screen, rather than under the keyboard, the ROG Intelligent Cooling solution gets plenty of fresh air for high sustained performance.

The Flow Z13 sports a retro-futurist design inspired by the 20th-century Space Race, but encompassing ROG’s vision for the future of gaming: ultimate portability. A CNC-milled window on the rear of the chassis allows a look straight into the machine’s mainboard, and the chassis is covered in spacecraft-inspired machining. The built-in kickstand can be opened up to 170° for optimal usage in nearly any scenario.

For extra gaming horsepower and I/O expansion, the Flow Z13 and X13 are both compatible with the XG Mobile family of external GPUs. They can connect to the 2021 XG Mobile with an NVIDIA GeForce RTX 3080, or this year’s new addition to the XG Mobile family, which includes an AMD Radeon RX 6850M XT GPU. With additional USB ports, DisplayPort and HDMI, and Ethernet, the XG Mobile is ready for anything.

The ROG Strix GT15 has been updated for 2022 with the latest hardware from Intel and NVIDIA. Available in multiple configurations with up to an Intel Core i7-12700KF, NVIDIA GeForce RTX 3080, and 64 GB DDR4-3200 RAM, the GT15 delivers fluid visuals at high framerates with responsive performance for everyday multitasking. A built-in carrying handle and headphone hook make for convenient transport to LAN parties, and Aura Sync accents let each player show off their individual style.

Laptops are designed to go everywhere, which is why ROG is also introducing brand new accessories in the Archer series of bags and backpacks. The Archer Messenger 14 is built to carry essential electronics, with plenty of small pockets for ROG Phone, portable charger, and other necessities — plus enough room for up to a 14-inch laptop. The Archer Backpack 15.6 carries a day’s worth of gear, while the Backpack 17 uses modular compartments users can customize to fit their gaming, photography, or content creation equipment, including a dedicated tripod strap. The Archer Weekender 17 includes extra padding for larger trips, and can be carried like a backpack or a duffel to fit any scenario. A dedicated water- and stain-proof pocket along the bottom is perfect for laundry, while another pocket on top can preserve heated items for up to 6 hours. All Archer backpacks use lightweight, durable, and water-repellent materials to withstand heavy use, alongside subtle but striking ROG design elements for a unique style.