Gigabyte WRX80 SU8 IPMI Motherboard Overview – What can it do?

Home » Gigabyte WRX80 SU8 IPMI Motherboard Overview – What can it do?

With the launch of the Ryzen Threadripper PRO 3000WX series mid last year, enthusiasts and professional consumers (prosumers) finally had the chance to get their hands on an enterprise grade product that could be more suited for their use case. Objectively, the choices from the Threadripper PRO 3000WX provides consumers an alternative to what the Intel Xeon series offer. Riding on the popularity and great performance from their Ryzen lineup of products, the Threadripper PRO 3000WX also became a viable choice to many prosumers. Perhaps that is also why they are also used in GeForce NOW servers to enable subscription based remote game streaming.

However, having a high performance workstation grade CPU is only part of the equation. A supported motherboard is equally important. Unfortunately, as not all brands are positioned to cater for the prosumer/professional audience, there is indeed a lack of such supported motherboards for the Threadripper PRO 3000WX series processors. In Singapore, we only know of the Gigabyte WRX80 SU8 IPMI and the ASUS Pro WS WRX80E-SAGE SE WIFI.

Of course, choosing the right motherboard for professional use is very different from how you’d usually do for a general purpose computing PC. As these professional workstations are going to be running different kinds of workloads, and often 24/7, reliability and specialized features then becomes the top deciding factor.

In this review, we will take a closer look at the Gigabyte WRX80 SU8 IPMI motherboard and the various features that it has for it to be a suitable choice for a very niche use case.

The Gigabyte WRX80 SU8 IPMI motherboard is really more of a server motherboard than what we would say as a motherboard for the prosumers. If you take a closer look at its features, it has been carefully designed to include features that are usually only important for server administrators and server deployments.

In the ending part of this article, we will also share with you how the Gigabyte WRX80 SU8 IPMI motherboard is also suited well for our professional deployments. 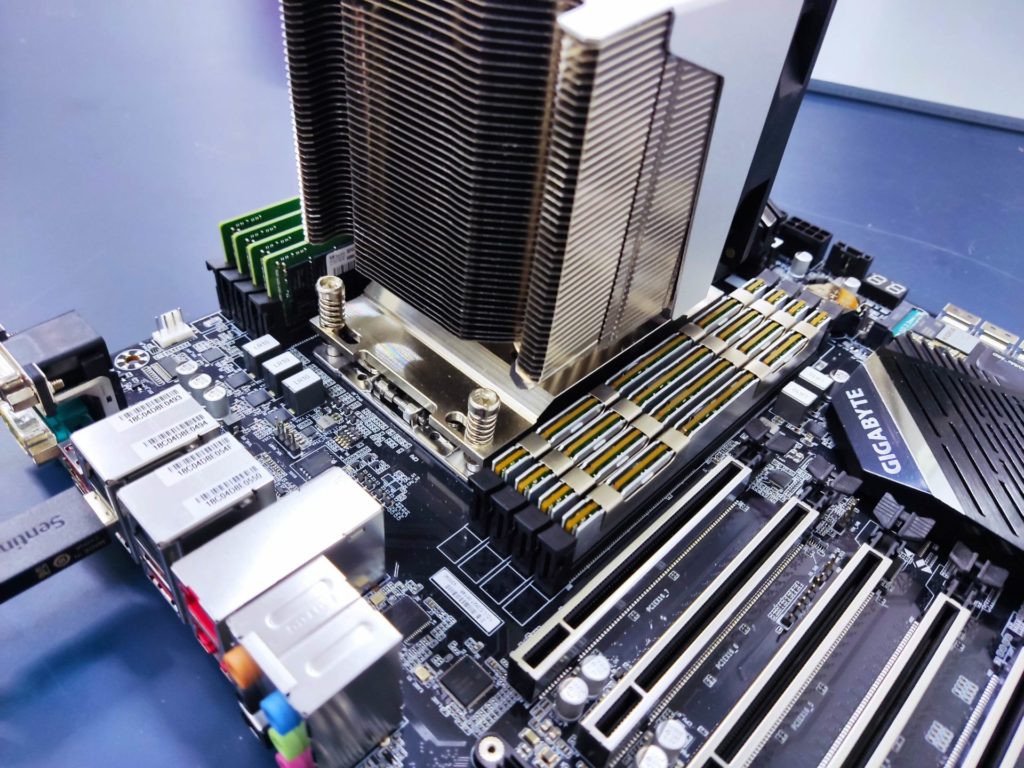 On the Gigabyte WRX80 SU8 IPMI, we spotted 8 DIMM slots, maximizing what the WRX80 chipset has to offer. Each DRAM can run in its own channel, having direct communication to the CPU. 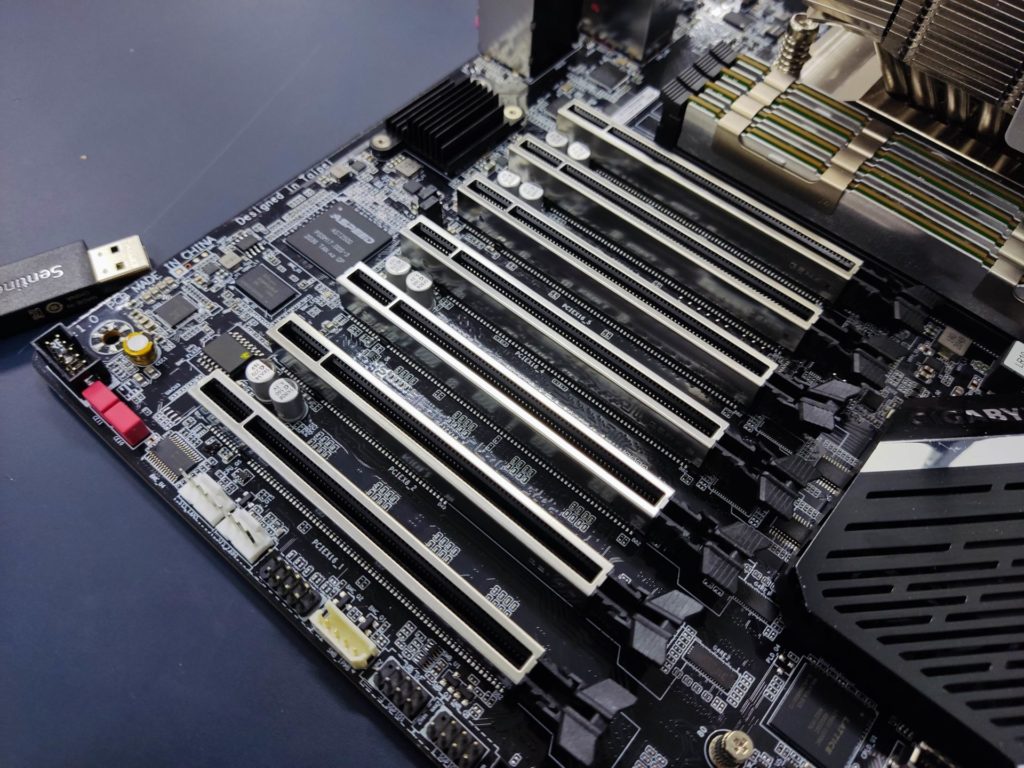 There are also 7 x PCIe slots that are designed to take up the excessive number of PCIe lanes provided by both the Threadripper PRO CPU and chipset. In fact, the WRX80 supports up to a total of 152 PCIe 4.0 lanes. These PCIe 4.0 lanes allows two times the bandwidth of the typical PCIe 3.0 standard found on most workstation systems today. Of course, as a workstation/server motherboard, the Gigabyte WRX80 SU8 IPMI works extremely well to power systems that requires multiple graphics card or additional PCIe expansion cards. 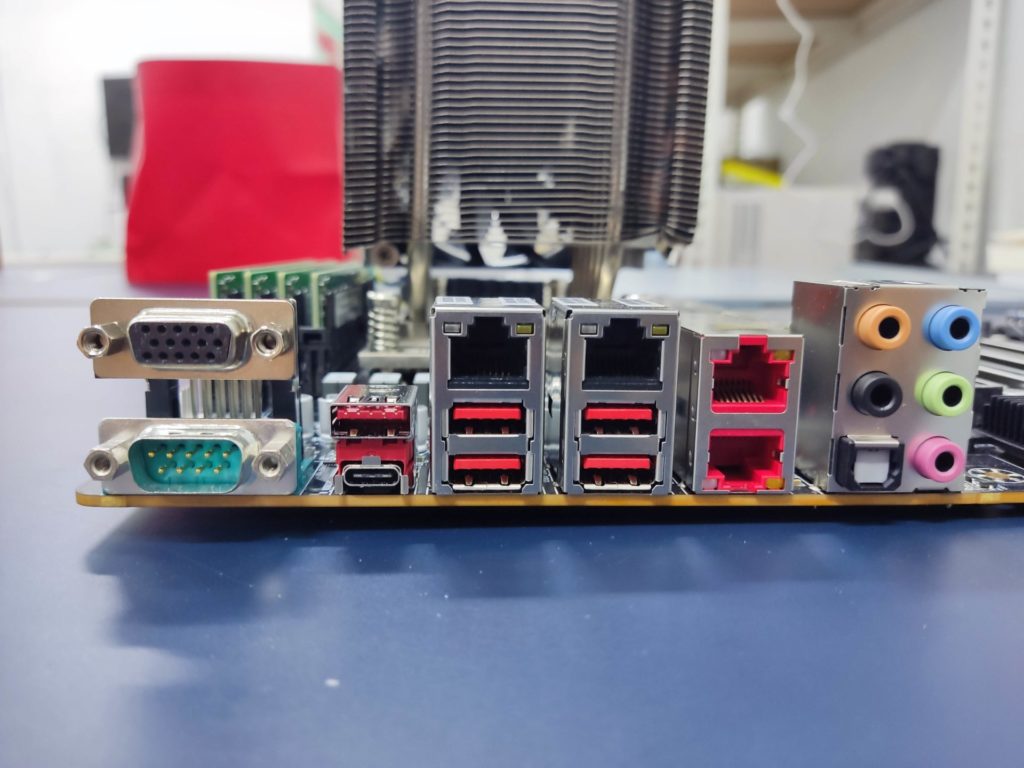 We don’t see an excessive number of USB ports on the Gigabyte WRX80 SU8 IPMI motherboard, as it is simply not meant for the typical consumer. In fact, for server systems, we probably will expect deployments to run headless without a dedicated display. Access to the server is usually only done through remote terminals such as SSH.

The motherboard spots a VGA port that makes it easy for you to setup the system initially without the need for a dedicated graphics card. It’s fundamental as you would want your expansion slots freed up for GPUs to do actual compute, rather than to be used for graphics output. Below the VGA port is a serial port. The motherboard has 6 x USB ports, out of which are 5 x Type A ports and 1 x Type C port. They are all native USB 3.2 Gen2 Ports (10Gbps). The motherboard also boasts 4 x Ethernet ports. The two in red supports 10Gbps Ethernet, while the others support 1Gbps. The motherboard also comes with audio input/output jacks. 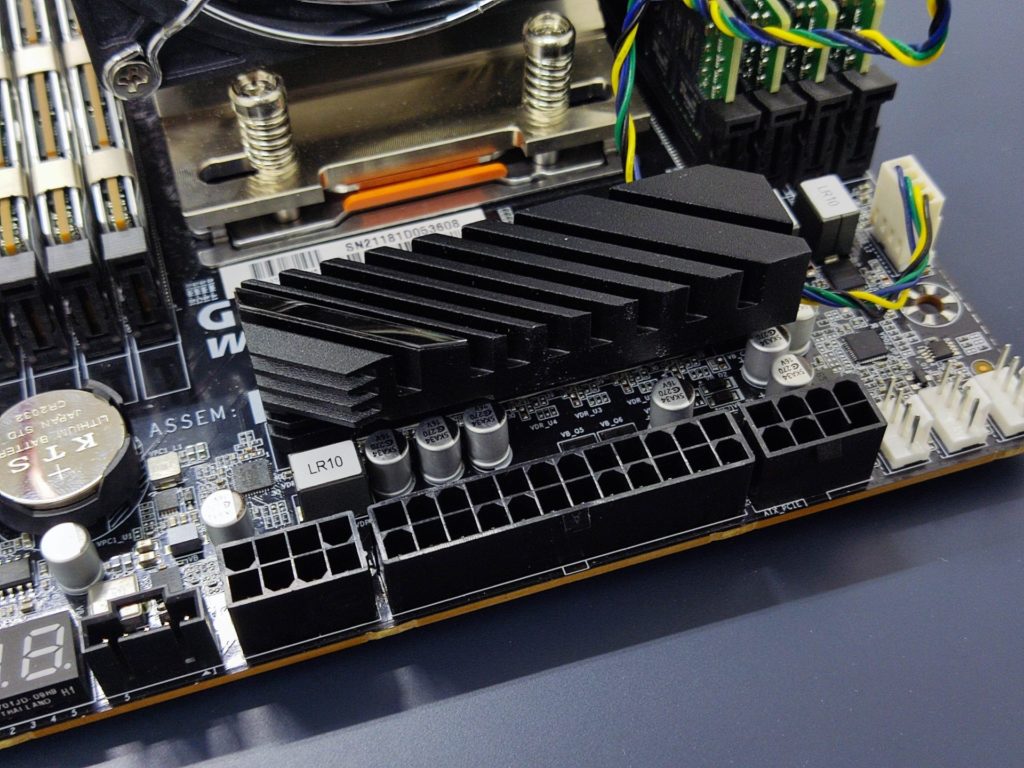 The motherboard needs to be powered by the usual 24-pin connector and a typical EPS 8 pin connector. If you are thinking that the other 8-pin connector is also a EPS connector, you will be mistaken. The Gigabyte WRX80 SU8 IPMI takes in another PCIe 8-pin power plug to properly power all its components and external peripherals. 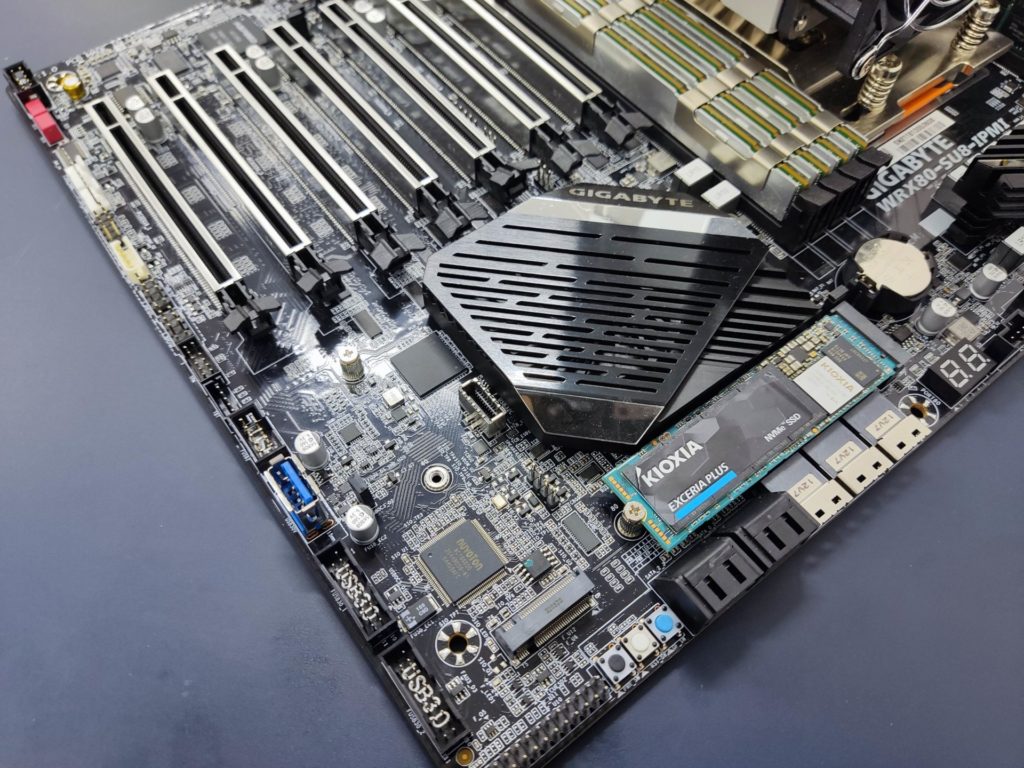 The Gigabyte WRX80 SU8 IPMI comes with 2 x M.2 PCIe 4.0 connectors that are linked directly to the CPU. 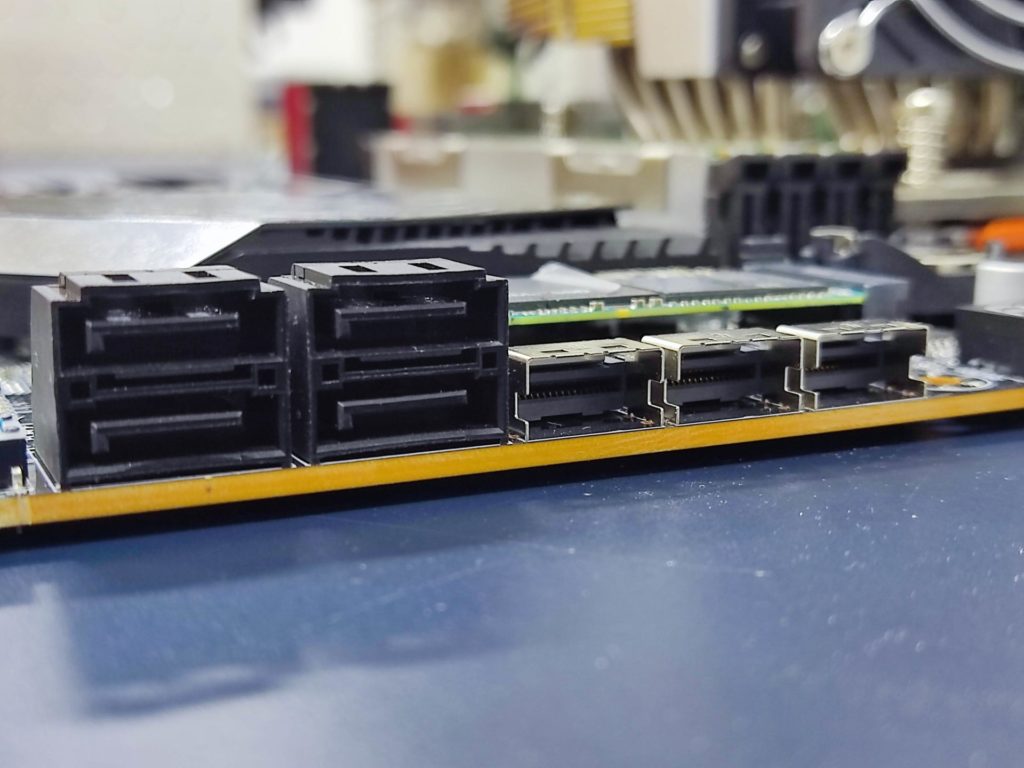 For storage, the Gigabyte WRX80 SU8 IPMI comes with 4 x standard SATA 6Gbps ports and 3 x slimSAS ports (do take note of their compatibility in the specifications table above). 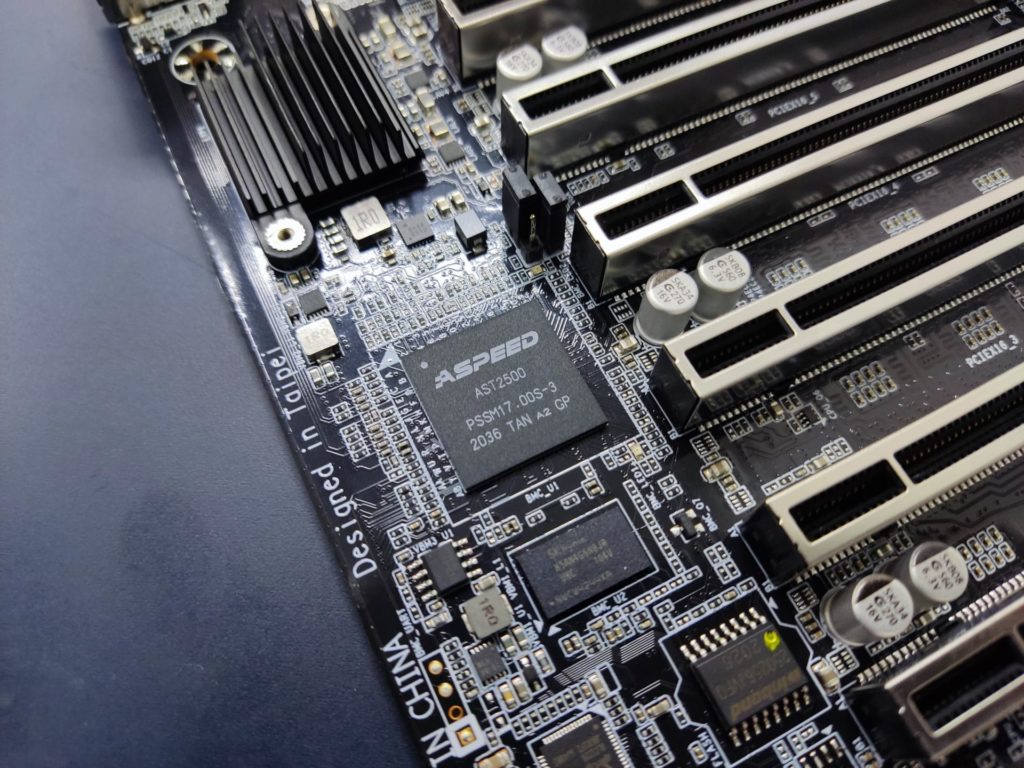 What sets the Gigabyte WRX80 SU8 IPMI motherboard apart from competing products is that Gigabyte has included an BMC chip for the management of the motherboard. This chip forms the whole IPMI architecture on the motherboard. In case you didn’t know, IPMI stands for Intelligent Platform Management Bridge. The BMC (Baseboard Management Controller) is part of the IPMI, which feeds it information about the telemetric of the motherboard, such as fan speed, voltages, frequencies, temperatures etc.

For most consumer motherboard, this is done over the UEFI BIOS interface. As servers are usually accessed remotely, the IPMI system can also be accessed remotely. You can access the Gigabyte WRX80 SU8 IPMI motherboard’s settings interface via a local web browser. The network which the server is in can also be configured in a way to allow the access of the IPMI management web server over a remote network. 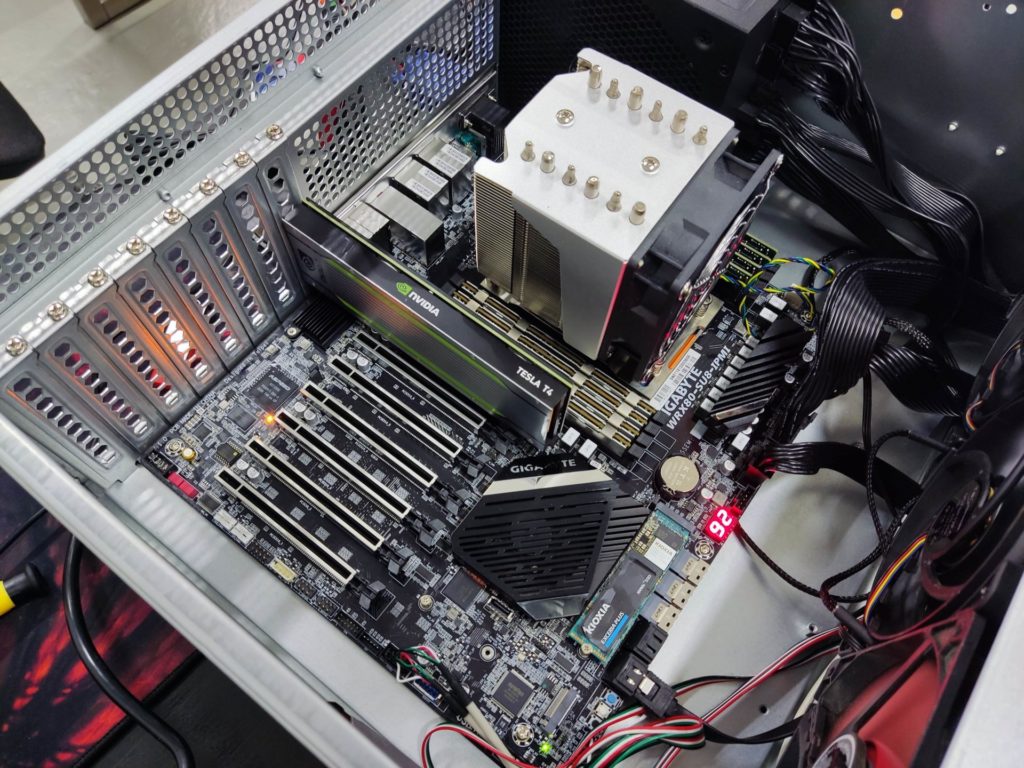 For a project, we used the GIGABYTE WRX80-SU8-IPMI in a server deployed for retail analytics. The server was powered with a AMD Ryzen Threadripper PRO 3995WX processor with 256GB of RAM and an NVIDIA Tesla T4 graphics card. 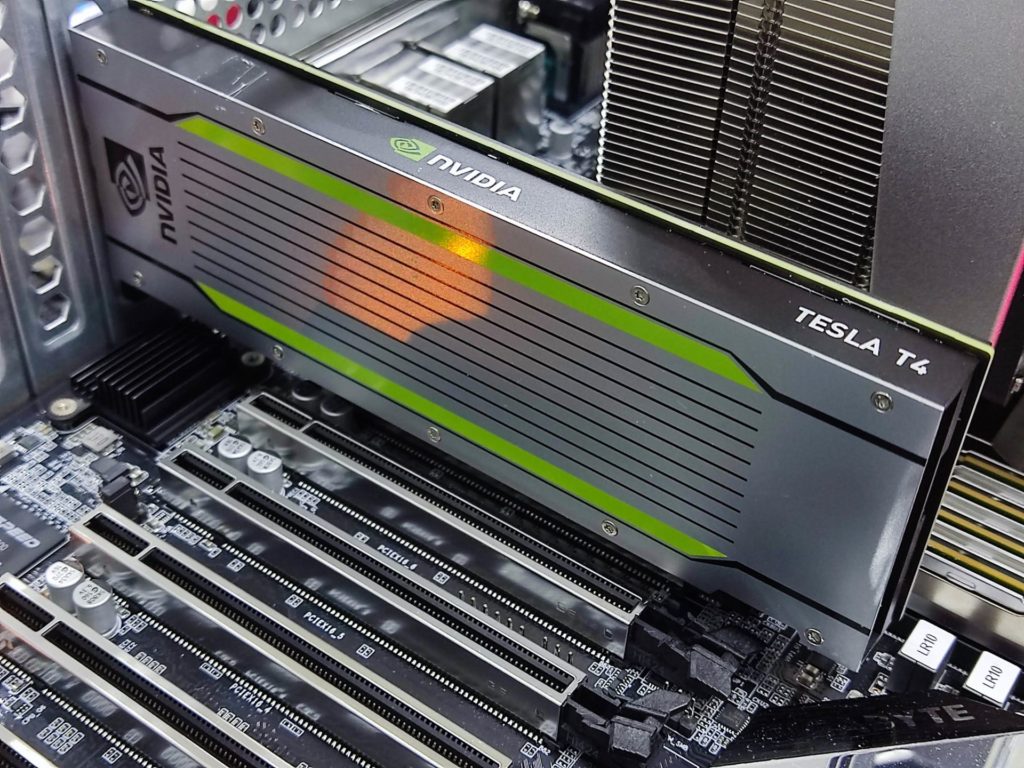 You can read more about the deployment in the article here.

Since there isn’t really a lot of choices available when looking for a motherboard that supports the AMD Threadripper PRO 3000WX series processors, you can only determine which motherboard suits you the best. Featuring many server features, such as IPMI, multiple network ports and also an abundance of expandability options, we think that the GIGABYTE WRX80-SU8-IPMI is certainly a great choice if you were to build a server. You will appreciate all these enterprise grade features especially if you are using the motherboard for its purposes that it is designed for.

Adobe MAX 2021: Unleashing Creativity For All With The Next Generation Of Creative Cloud