If you are planning to build a new PC with the 11th Gen Intel Core processors, it would be common sense to get a motherboard based on the Z590 chipset instead of the Z490. However, you would be spoilt for choice as all major manufacturers have released their Z590 motherboard series, each with their own set of unique features, configurations, style and character.

Today, we are putting our focus on the GIGABYTE Z590 AORUS MASTER motherboard. Thanks to GIGABYTE, we also have the latest Intel Core i9 11900K processors to pair with the motherboard. Let’s learn more about what makes this motherboard unique, and if it it’s worth your consideration for your new build.

The Z590 AORUS MASTER is part of the high end gaming motherboard offering from GIGABYTE. It features many prominent features, such as a specially designed power delivery system and cooling system. Of course, when many system builders choose a motherboard, other than for its specifications, its aesthetics also forms part of the decision factors.

In terms of design, it looks fairly similar to the Z490 AORUS MASTER which we’ve tested previously. The key difference comes in the VRM heatsinks, where all the cooling fins are exposed, as compared to having a single block for heat dissipation. Generally, this design should promote better heat dissipation for more effective cooling from the power delivery components.

The strategy by GIGABYTE for cooling the GIGABYTE Z590 AORUS MASTER is by introducing what they call as Direct-Touch Heatpipe II and Fins-Array II on the power delivery components, Thermal Guard II heat sink for the M.2 drives, and 2x extra thick Copper PCB traces for the whole motherboard. Each of these heatsinks also interfaces with the motherboard components with a high conductivity 7.5W/mK conductivity pad, which is said to transfer 4x more heat than traditional thermal pads. As for the power design, GIGABYTE has used a Digital PWM Controller and 18 Smart Power Stages to power the motherboard. Each Power Stage is capable of providing 90A of power, bringing a total of 1620A to all the components on this motherboard. This setup, coupled with the use of high quality Tantalum Polymer Capacitors Arrays and the use of dual 8-pin CPU power connectors, ensures that the system can still run smoothly and reliably regardless of its configurations. Such a setup is fit for the most intensive overclocking setups, and is more than capable of powering the latest 11th Gen Intel Core processors. 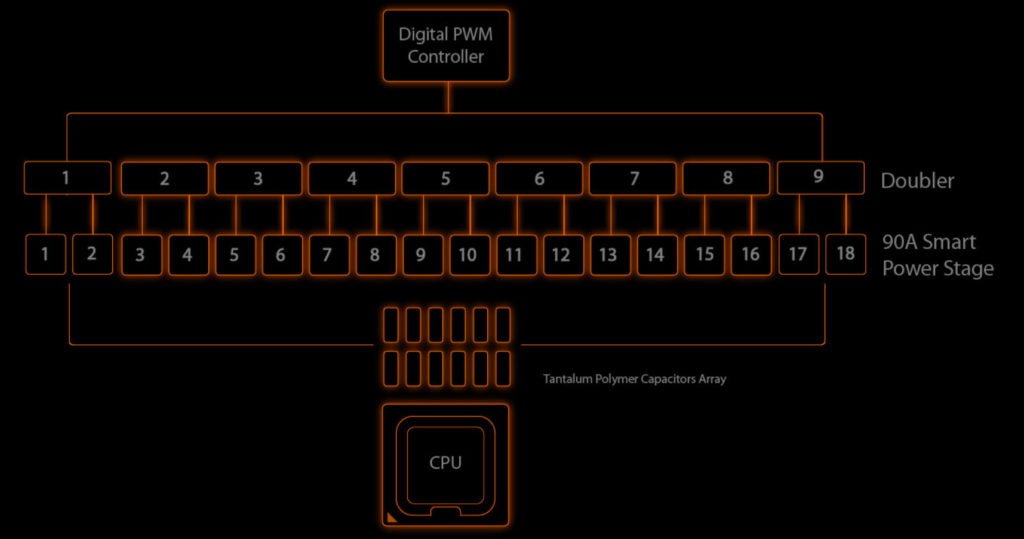 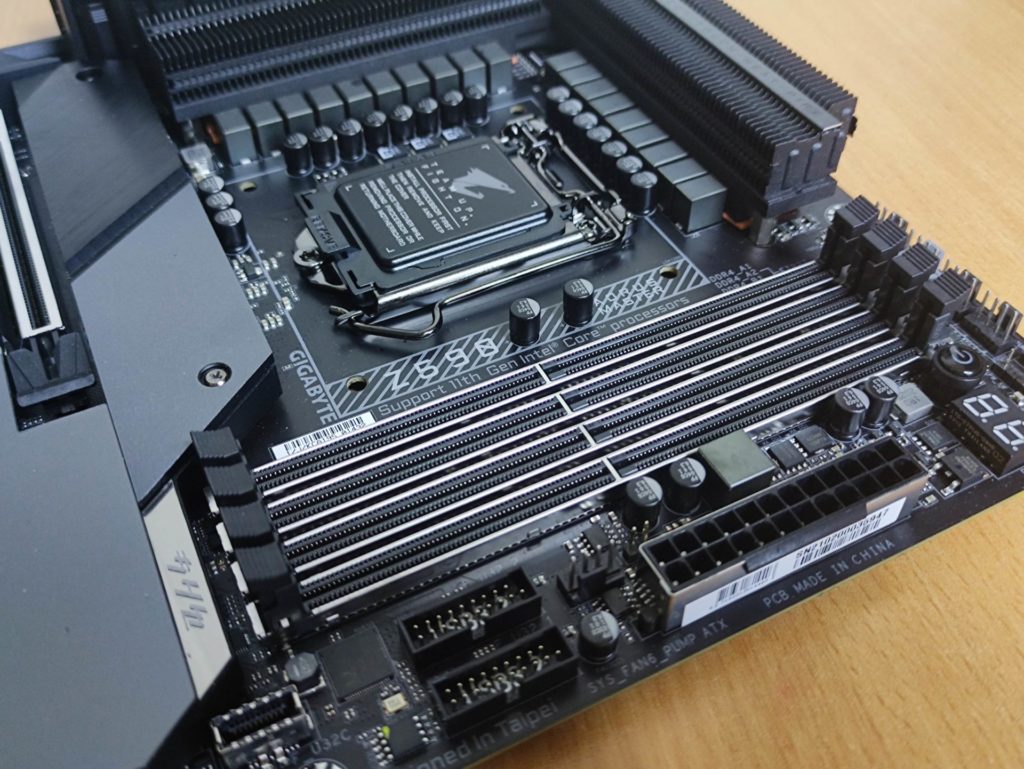 GIGABYTE has tested many memory configurations on the GIGABYTE Z590 AORUS MASTER motherboard, ensuring that the motherboard can work with XMP profiles of up to 5000MHz and beyond. Users can simply pop their DIMMs into the motherboard and expect that they will run at their expected speeds.

To ensure the reliability of the memory sticks at such high speeds, GIGABYTE has employed a shielded memory routing method to reduce external interference. This is done by adding a large ground layer under the PCB inner layer. Also, this motherboard uses a Daisy Chain memory design, which is typically better for running two DIMM sticks in dual channel mode at high speeds. As this is a high performance motherboard, we can see how GIGABYTE preferred to use a Daisy Chain design instead of alternatives in order to reach high speeds for the memory sticks. 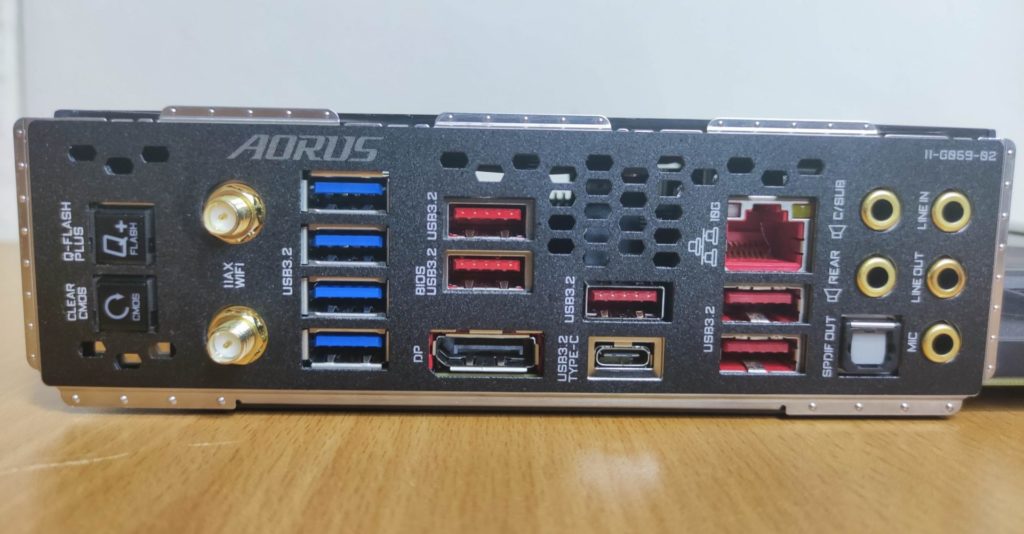 GIGABYTE Z590 AORUS MASTER motherboard comes with a very comprehensive set of I/O ports. On the rear I/O area, we can see that the Q-Flash and Clear CMOS quick access buttons. This is followed by the antenna ports, which is used for the built-in Intel WiFi6 setup. There are a total of 10 USB ports, 4 of which are USB 3.2 Gen 1 and 5 of which are USB 3.2 Gen2. The last USB port comes in the Type-C interface, and supports the 20GB/s USB 3.2 Gen2x2 interface. 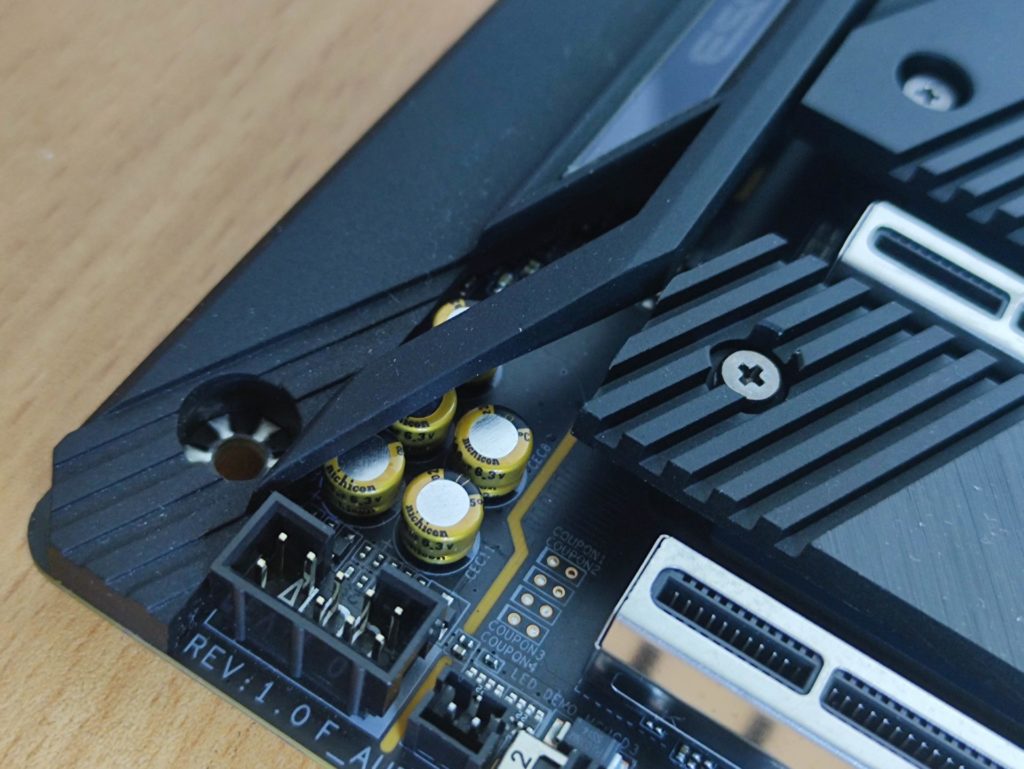 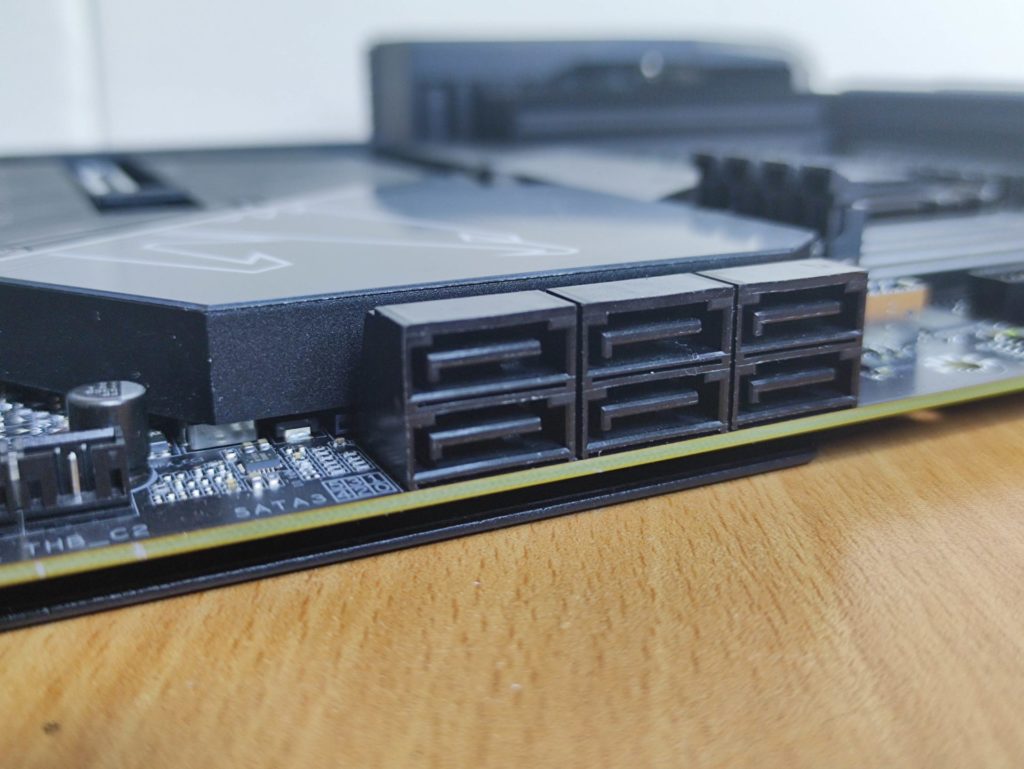 The motherboard still comes with 6 x SATA 6Gbps ports for connecting your standard hard drives or SSDs that are still based on the SATA interface. 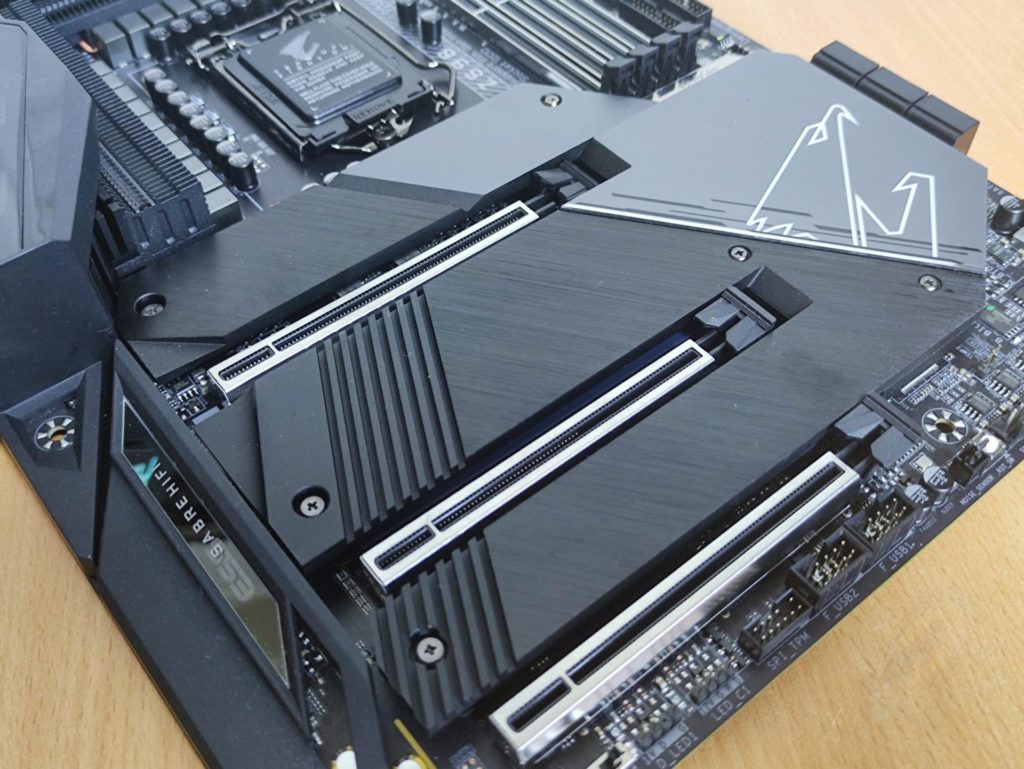 It also comes with 3 x PCIe x16 slots for your expansion cards. The first two slots are PCIe 4.0 slots, which doubles the bandwidth when compared to PCIe 3.0 The first slot comes with x16 lanes, while the 2nd slot only has x8 lanes.

The last slot only runs in x4 mode under the PCIe 3.0 standard. 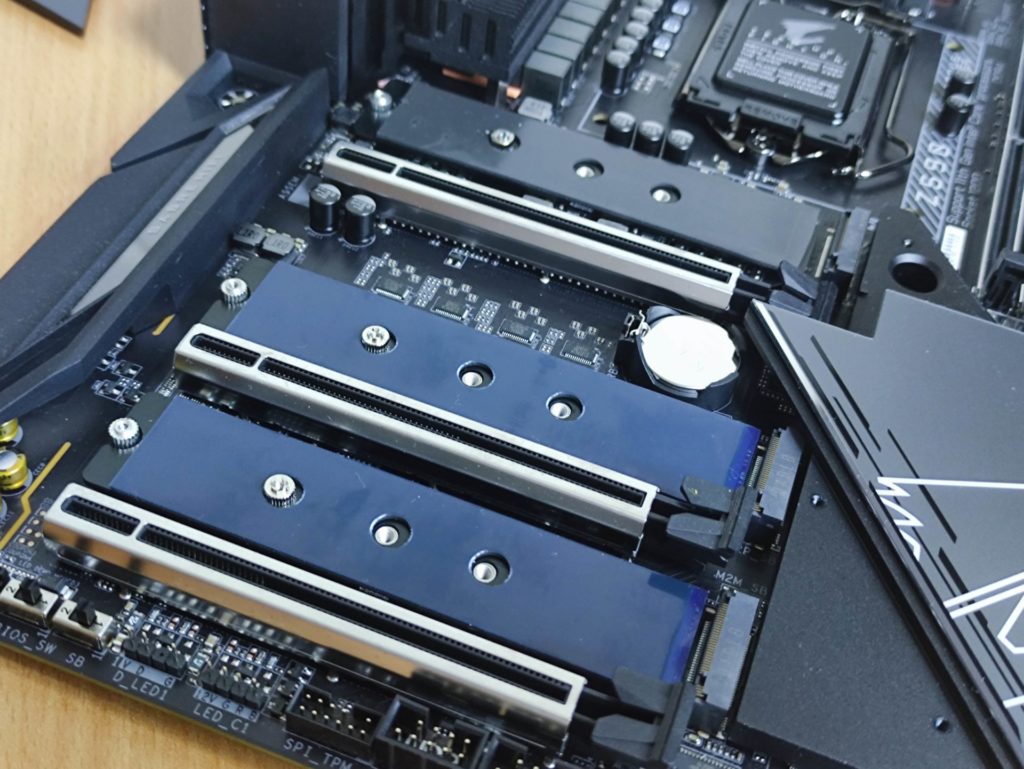 The motherboard can also support up to three M.2 SSDs in total. The first slot is slightly special, as it also supports the newer PCIe 4.0 interface with x4 lanes. The 2nd and 3rd slot still runs on PCIe 3.0 with x4 lanes each. Do take note that SATA M.2 SSDs are not supported on the first slot.

Do also take note that thermal pads are found on both the bottom of the heatsink and the slot, thus allowing heat dissipation on both sides of the M.2 SSD. This should cool every M.2 SSD adequately.

One of the key issues I have with the GIGABYTE Z590 AORUS MASTER is the design of the heatsink that comes on top of the SSDs. It is because GIGABYTE prefers to use a single block of large material to cover both the 2nd and third M.2 SSD slots, it will essentially means that you will have to remove any expansion cards on the PCIe slots just to add another SSD.

I thought that this design could be improved, as it introduces some inconvenience when upgrading or maintaining the PC. Moreover, as the heatsink are held in place by screws, it can also be quite troublesome when trying to install or remove the heatsinks, especially when working in the small spaces within the setup. If you were to lose the screws, there aren’t any spares found in the motherboard’s box as well. In our tests, we are going to compare the GIGABYTE Z590 AORUS MASTER motherboard with a setup from our usual AMD based test bench. This should give you a good understanding of how the Z590 and 11th Gen Intel platform fairs when placed side by side to the competition. As the focus on the review is on the motherboard, we can also see if the GIGABYTE Z590 AORUS MASTER can keep up to the demanding requirements of the 11th Gen Intel Core i7 11900K.

Do take note that it is not in the interest of this review to compare between the AMD and Intel platform. The objective is to determine if the GIGABYTE Z590 AORUS MASTER is able to run well. Take the comparison between the two platforms in the results below with a pinch of salt. 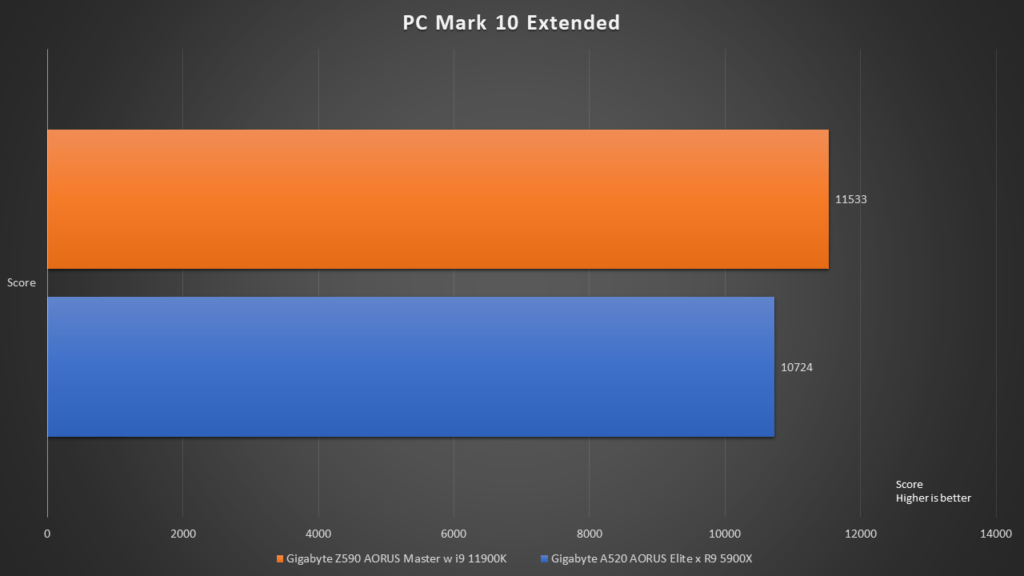 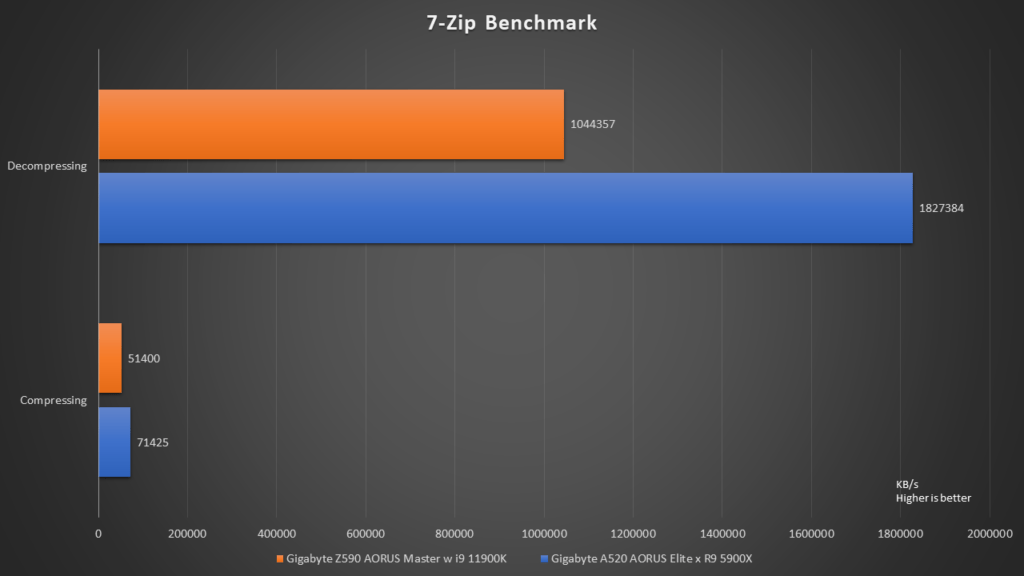 The GIGABYTE Z590 AORUS MASTER is certainly a very capable motherboard. Based on our performance tests, it was able to allow the flagship Intel Core i9 11900K to run at its full speed reliably, without any hiccups. Moreover, thanks to the new Z590 chipset, we are also seeing a new high in SSD performance levels, thanks to the support for PCIe 4.0. It is the first time that we are able to see such high storage speeds on an Intel platform.

The VRM temperature on the GIGABYTE Z590 MASTER still remained well under control even when the system was stressed. This has showed the effectiveness of the cooling solution on the motherboard, which is perhaps more than sufficient to cool its power components.

There’s probably a lot more that the motherboard can do, especially in extreme overclocking scenarios. As the Intel Core i9 11900K has already been quite optimized right out of the box, there wasn’t much overclocking that can be done to the system without upgrading our cooling solution.

In conclusion, if you are looking for a new motherboard that can fully handle the new 11th Gen Intel Core processors, the GIGABYTE Z590 MASTER is a great choice. What we wonder, is what more can this motherboard do, being equipped with such high-end components and technologies.

‘Overwatch’ Players Cut Response Time In Half Thanks to NVIDIA Reflex. Coming Soon to ‘Rust’ and ‘Ghostrunner’