“With the Flow X13, ROG has once again redefined what a perfect portable gaming laptop can be. It is the most versatile gaming laptop in the world, being able to serve as an uncompromised tablet, powerful conventional gaming laptop with its built in GPU, and even provide desktop gaming power with its XG Mobile external GPU”, – said Peter Chang, General Manager of ASUS APAC

The Flow X13 delivers powerful hardware in an ultraslim 13-inch body with up to an 8-core AMD Ryzen™ 9 5980HS CPU and dedicated GeForce® GTX 1650 GPU. A 360° hinge maximizes touchscreen viewing and interaction, quickly flipping from laptop mode into positions for gaming, drawing, and presenting. A choice of two 16:10 display options provides either a 120 Hz refresh rate or an Ultra HD 4k resolution with richer detail.

Slim and lightweight, the Flow X13 is only 15.8 mm thin and 1.3 kg (2.9 lb). It runs at full power with a lightweight 100W USB Type-C adapter, and its battery provides up to 10 hours of video playback. The Flow X13 further stands out by seamlessly integrating with a new class of external GPU (eGPU) that adds power and flexibility in an ultraportable form factor. 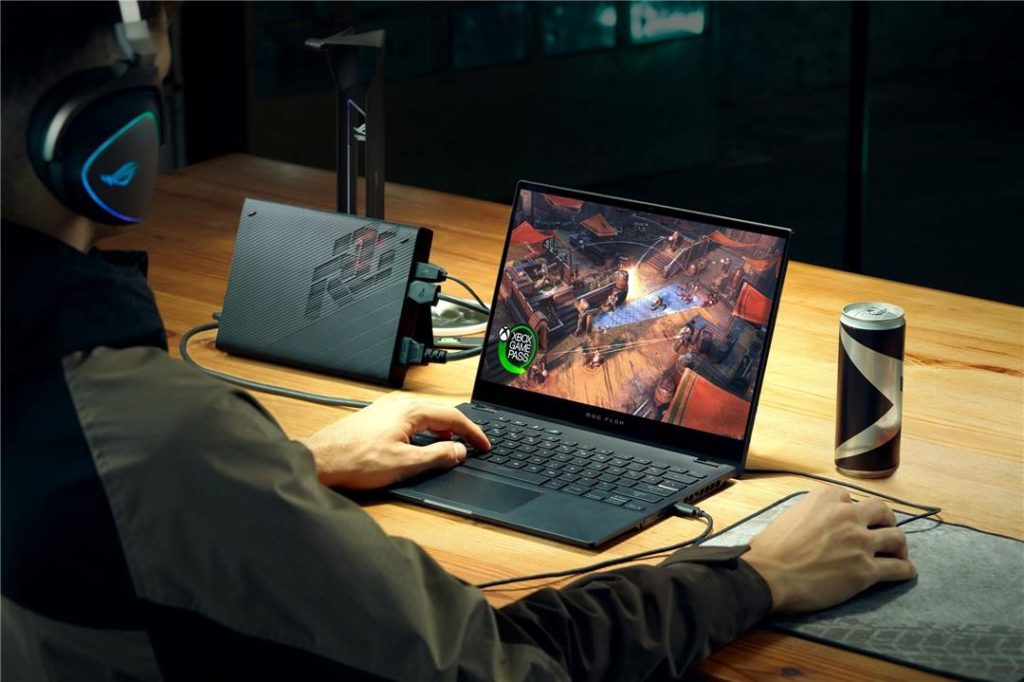 The innovative ROG XG Mobile is a fraction of the size of external graphics alternatives. Yet it incorporates up to a powerful GeForce RTX™ 3080 GPU connected directly to the CPU via a custom PCIe® 3.0 x8 interface that’s faster than Thunderbolt 4. A dedicated USB 3.2 Gen 2 link feeds an I/O hub with extra connectivity, while an integrated 280W AC adapter powers both the XG Mobile and Flow X13, removing the need for users to carry an additional power brick.

Together, the Flow X13 and XG Mobile redefine what’s possible with a 13-inch device, empowering users with versatile portability while providing desktop-class gaming performance and connectivity on demand. 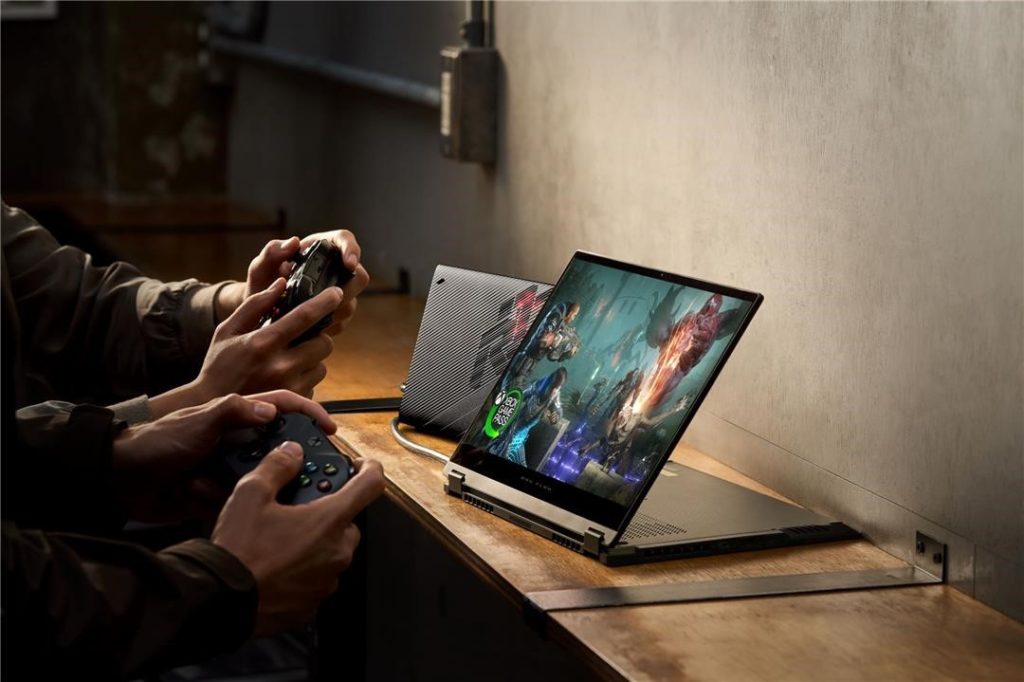 The Flow X13 has a slick convertible design with a 360° hinge that allows users to use different modes for different tasks.

Standard laptop mode is optimal for serious gaming and multitasking. Tablet mode makes it possible to swipe through content or draw and take handwritten notes with a compatible active stylus like the ASUS Pen. The touchscreen is protected by Corning Gorilla Glass, which resists scratches from everyday use.

The 360° hinge also enables stand mode, which brings the display closer to the user, and tent mode, which minimizes the device’s footprint. These positions give the cooling fans more unobstructed access to airflow, lowering temperatures by up to 8 degrees.

The 13-inch chassis is slim and lightweight at only 15.8 mm thin and 1.3 kg. A textured exterior with a wave-like design adds style while providing a secure, fingerprint-resistant grip for easy carrying. Integrated one-touch login also allows the Flow X13 to wake up like a smartphone.

ROG is a pioneer in the field of external graphics, having introduced the very first eGPU dock, the XG Station, in 2007. The new ROG XG Mobile introduces a streamlined design that offers an innovative new way to bring desktop-class gaming performance to an ultraportable form factor.

Weighing only 1 kg (2.2 lb) and measuring just 155 mm (D) x 208 mm (W) x 29 mm (H), the XG Mobile is 6% the size of typical eGPUs despite featuring up to a GeForce RTX™ 3080 GPU clocked to 1810 MHz at 150W with ROG Boost. The top-of-the-line GPU is based on the new NVIDIA Ampere architecture, which combines CUDA cores for programmable shading with 2nd generation RT cores for advanced ray tracing and 3rd generation Tensor cores that offer greater throughput for AI-accelerated DLSS graphics

The XG Mobile connects directly to the CPU with a custom PCIe® 3.0 x8 interface that’s faster than Thunderbolt 4. The interface dedicates 63Gbps of bandwidth exclusively to graphics, resulting in significantly higher performance than eGPU alternatives. A separate USB 3.2 Gen 2 connection adds 10Gbps just for I/O, and both share a 41cm cable.

The USB link drives the XG Mobile’s multi-port hub, which has four USB Type A 3.2 Gen 1 ports, a full-sized SD card slot, and a Gigabit Ethernet port. DisplayPort 1.4 and HDMI 2.0a display outputs connect directly to the external GPU.

Up to an AMD Ryzen™ 9 5980HS CPU with 8 cores and 16 threads provides the performance needed for demanding workloads. The Ryzen 5000 Series Mobile Processors feature a new “Zen 3” architecture backed by a large on-chip cache up to 20 MB. The HS designation indicates chips that have a 35W power envelope tuned for ultraslim chassis but are capable of scaling up to 54W when thermal and power headroom allow.

A special Flow X13 Supernova Edition will be available with the top-of-the-line Ryzen™ 9 5980HS, which scales up to 4.8 GHz on a single core.

Up to 32GB of memory provides smooth multitasking. The Flow X13 uses LPDDR4X-4266 RAM, which consumes 50% less power and generates less heat than typical DDR4 memory. LPDDR4X memory also takes up 46% less surface area on the motherboard thanks to smaller chips and simplified traces, leaving more room for a powerful CPU and GPU.

A PCIe® SSD provides high performance and up to 1TB of capacity, giving users ample storage space for games and professional portfolios.

The Flow X13 incorporates a GeForce® GTX 1650 GPU capable of hitting clock speeds up to 1255 MHz at 35W in Turbo mode with ROG Boost, with the ability to draw an additional 5W via Dynamic Boost[1], enabling strong performance in the latest games.

Both display options are factory-calibrated to meet the PANTONE® validation standard for color accuracy. They also have a taller 16:10 aspect ratio that provides more vertical space for games and creative workflows.

The Flow X13’s cooling system is fine-tuned to enable high performance within the small chassis. Liquid metal thermal compound improves thermal transfer from the CPU to the heatpipes, reducing the processor temperature by up to 10°C compared to standard thermal paste. ROG was the first to automate the application of liquid metal for mass production. Now, that patented process has been adapted to AMD Ryzen processors, which present different challenges due to the presence of conductive components around the die. ROG is the first to mass-produce laptops with liquid metal on AMD CPUs.

Heat is transferred away from the CPU, GPU, and VRM by 2 heatpipes, which have a slimmer shape to save space and increase the contact area for thermal transfer. A retooled thermal module fits three large heatsinks and fan outlets inside the system, far more than typically seen in a device this size. Together, these heatsinks offer 44,230 mm² of surface area for fast and efficient heat dissipation.

Dual Arc Flow fans generate maximum airflow with minimal noise. These fans are based on a new design with 84 blades that vary in thickness to move more air. The blades are capped with special tips that follow an aerodynamic wave pattern to stabilizes the airflow and reduce noisy turbulence. These advancements improve airflow by up to 13% without increasing noise. With 0dB Technology, the fans switch off completely when CPU and GPU temperatures are low in the Silent operating mode. This makes cooling truly silent under light workloads.

The self-cleaning thermal module uses anti-dust tunnels to channel particles away from the fans and heatsinks. Minimizing build-up helps the cooling system operate more reliably over time, giving the laptop a long life of fast and flexible gaming. ROG’s latest design shortens the tunnels to make space for both larger fans and higher airflow.

The long-lasting battery powers the Flow X13 for up to 10 hours of video playback. Type-C charging support allows users to replenish the battery from portable power packs and third-party adapters, enabling more time away from wall sockets.

The Flow X13’s streamlined 100W Type-C adapter measures just 75 x 75 x 28.8 mm and weighs only 300g (10.6oz), making it much smaller than the power bricks typically required by gaming laptops. Thanks to fast-charging technology, the battery can be replenished from 0% to 50% in only 30 minutes.

To improve voice chat, advanced Two-Way AI Noise Cancelation removes unwanted sounds from both input and output audio. It can be applied to any device and even customized on a per-app basis, so users can limit noise-canceling to chat apps without affecting in-game sounds. Gamers can communicate better with teammates, creators can record cleaner audio in any environment, and everyone can enjoy clear conversation. Because Two-Way AI Noise Cancelation runs on the CPU, the GPU is free to focus on maximizing frame rates.

For more comfortable typing and gaming, the Flow X13’s edge-to-edge keyboard design incorporates a full-sized, desktop-style layout into its compact chassis. The ErgoLift hinge raises the back of the keyboard as the system is opened for a better typing angle.

The Flow X13 also provides ample connectivity, including a USB 3.2 Gen 2 Type-C port that supports both Power Delivery[2] and DisplayPort 1.4. An HDMI 2.0b port allows another display to be connected. A USB 3.2 Gen 2 Type-A port is ready for gaming mice or gamepads, and a 3.5 mm jack accommodates headphones or headsets.

[1] Dynamic Boost is not available in the Flow X13 Supernova Edition.

Specifications, content and product availability are all subject to change without notice and may differ from country to country. Actual performance may vary depending on applications, usage, environment and other factors. Full specifications are available at http://www.asus.com