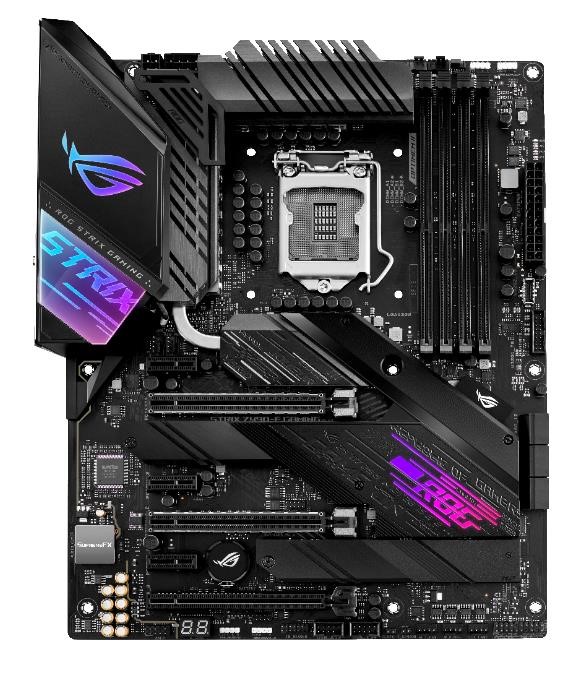 Singapore, April 30, 2020 — ASUS today announced its new range of Z490 motherboards designed to showcase the full potential of the new 10th Generation Intel® Core™ processors. Ideal for gamers, enthusiasts and professionals, every ASUS and Republic of Gamers Z490 motherboard features improvements and enhancements to take clock speeds to the next level.

Maximus XII Extreme gives builders access to memory clocks of 4800 MHz and beyond, allowing them to explore the upper limits of overclocking. It features out-of-the-box compatibility with over 80% of 4600 MHz DDR4 kits, and has an onboard POST code LED display next to the Power-on, Retry, and Safe Boot buttons.

Four M.2 slots allow for builds with fast, ample storage, with two situated underneath the main body armor in the middle of the board, and another two on the DIMM.2 card with accompanying heatsinks to ensure sustained and reliable storage performance.

An assortment of USB ports is available, including a next-generation USB 3.2 Gen 2×2 Type-C® port capable of speeds of up to 20 Gbps. Three additional USB 3.2 Gen 2 ports — one Type-C and two Type-A — deliver speeds of up to 10 Gbps. Wired connections come by way of an Intel Ethernet I225-V controller that provides 2.5 Gb Ethernet and an Marvell® 10 GbE controller. Those who prefer a cord-free solution can take advantage of WiFi 6 and Bluetooth® 5.1 connectivity.

Maximus XII Extreme has a bundled ThunderboltEX 3-TR card, an Intel‑certified Thunderbolt™ 3 add-on card that provides bi-directional speeds of up to 40 Gbps via a single cable. Additionally, an integrated Thunderbolt 3 header can support up to six devices in a daisy-chain and provide up to 100 watts of power to fast-charge devices.

Numerous headers on top of the motherboard cater to both standard and high-amperage fans, also present are liquid-cooling control headers and sensors. ROG Probelt voltage measurement points can be found along the right of the motherboard, next to four DIP switches to control the overclocking bench’s boot sequence. The onboard control hub also features the POST code LED display and Start and remappable FlexKey buttons.

A POST code LED display and dedicated power and reset buttons can be found on the upper right corner of the board. Two M.2 slots are situated underneath the heatsinks on the front of the board, with another at the rear — and all can be configured into a RAID array for maximum parallel storage performance.

Maximus XII Formula features 10 Gb and 2.5 Gb Ethernet, along with WiFi 6 and Bluetooth 5.1 connectivity. There are also numerous USB ports for connections to peripherals. Users can take advantage of AI Cooling, as well as AI Networking with GameFirst VI technology.

ROG Maximus XII Hero (Wi-Fi) delivers balanced performance and is more than ready for the demands of 10th Gen Intel Core CPUs. It can accommodate up to three NVMe storage devices, all cooled by dedicated heatsinks. This board features an Intel WiFi 6 adapter and two Ethernet ports, with one delivering speeds of up to 5 Gbps. Users can take advantage of AI Overclocking for the best clocks and voltage settings at the press of a button, while the ASUS OptiMem III trace layout enables higher memory frequencies and lower latencies.

Maximus XII Hero (Wi-Fi) incorporates RGB LED accents into its stealthy, blacked-out aesthetics. Users can customize the look of their build with Aura Sync and the onboard Gen 2 addressable RGB LED headers.

With 14+2 and 12+2 power stages respectively, Strix Z490-E Gaming and Strix Z490-F Gaming are ready to overclock the latest 10th Generation Intel Core CPUs with ease. This pair of motherboards feature a heatsink with an embedded heat pipe to cool the power stages, and a secondary heatsink to cool the Z490 chipset. Their six-layer PCBs and ProCool II auxiliary power connectors ensure smooth and stable power delivery. Strix Z490-E Gaming has an optional fan that can be attached to the VRM heatsink for additional cooling during overclocking. Four DIMM slots employ a daisy-chain topology for peak frequency potential, and can drive RAM to speeds of 4600 MHz and beyond.

Intel I225-V controllers provide baseline Ethernet speeds of up to 2.5 Gbps. Strix Z490-E Gaming has built-in WiFi 6 and Bluetooth connectivity, while Strix Z490-F Gaming has an M.2 E-key slot for an optional WiFi module. Two M.2 slots are available for NVMe SSDs, and those slots are found under heatsinks to ensure consistent performance.

A comprehensive array of USB ports can be found on the back panel of both motherboards, with Strix Z490-E Gaming featuring a USB 3.2 Gen 2 Type‑C® connector on its front panel. Superfast Thunderbolt™ 3 connectivity is also available via the optional ThunderboltEX 3-TR card.

Despite its size, Strix Z490-I Gaming can accommodate two M.2 devices, and they can be found underneath the heatsinks to ensure adequate cooling within the confines of small-chassis builds. A total of 13 USB ports are available, including three USB 3.2 Gen 2 Type-A and one Type-C connector at the rear panel.

ROG Strix Z490-H Gaming has large heatsinks covering the chipset and the 12+2 teamed power stages of the VRM. Its memory slots can accommodate DIMMs with speeds of 4600 MHz, too.

The motherboard’s three main PCIe slots are reinforced with ASUS SafeSlot for extra durability should users need to move or transport their system with a graphics card or expansion card installed. One of its two M.2 slots has a dedicated heatsink, while a third M.2 E-key slot is available to take in an optional WiFi 6 module. It also features 2.5 Gb Ethernet.

AI Overclocking and AI Networking technologies allow users to push the boundaries when it comes to processing or gaming performance. But cooling is not an issue for Strix Z490-H Gaming and its six fan headers, dedicated AIO liquid cooler pump header and thermal sensor input. AI Cooling is also available to keep fan noise in check.

TUF Gaming Z490-Plus features a six-layer PCB for better heat dissipation and signal integrity, as well as a 12+2 teamed power stage design with DrMOS components. TUF capacitors with high heat tolerance and ProCool solid-core auxiliary power inputs complement the main power circuitry. There are two PCIe x16 slots available, with one featuring the metal-reinforced ASUS SafeSlot design. Two M.2 slots are on hand for NVMe SSDs, with one of them covered by heatsink to keep thermal throttling at bay.

The rear I/O panel features USB 3.2 Gen 2 ports with both Type-A and Type-C connectors, and that’s complemented by a Gen 2 front-panel header. An onboard Thunderbolt 3 header is available for users looking to add a ThunderboltEX 3-TR card.

Two rows of RGB LEDs along the right of the board can be customized via Aura Sync. There are also three strip headers on the board, including a Gen 2 header, for users looking for additional customization options.

ASUS ProArt Z490-Creator 10G packs everything a professional creator or developer needs, with the added bonus of additional connectivity features. The I/O panel features two Thunderbolt 3 Type-C connectors powered by the latest generation Intel ‘Titan Ridge’ controller, each capable of speeds of up to 40 Gbps. The Thunderbolt connection also supports up to 12 devices in a daisy chain, and DisplayPort 1.4 video signals.

To cater to the graphical needs of content creators and graphics professionals, ProArt Z490-Creator 10G has three PCIe x16 slots so they can install up to three graphics cards in up to a x8-x8-x4 lane topology.

At the rear, four USB 3.2 Gen 2 Type-A connectors support speeds of up to 10 Gbps, and two USB 3.2 Gen 1 Type-A ports offer speeds up to 5 Gbps. There’s also a 2.5 Gb Ethernet controller and a 10 Gb Ethernet card for superfast networking performance.

A 2.5 Gb Ethernet controller comes as standard, and that can be supplemented by a CNVi-compatible WiFi module via the M.2 E-key slot. Prime Z490-A also has a dedicated header for Thunderbolt 3 expansion cards.

Aura Sync provides a myriad of light customization options across the integrated lights and strips attached to the four RGB LED headers, of which two are Gen 2 addressable headers. For audio, Prime Z490-A has a Realtek S1220A chip with a 120 dB signal-to-noise ratio, and support for DTS:X® Ultra for accurate 3D audio for games and movies.

The most attainable motherboard in the Z490 family, Prime Z490-P features a 10+1 teamed power phase VRM design and support for up to 4600 MHz RAM.

Dual M.2 slots are on hand for NVMe SSDs, and that’s further complemented by four SATA ports for large-capacity hard drives. In addition, an E-key slot is available for a WiFi card and a Thunderbolt 3 header for a ThunderboltEX 3-TR expansion card. The main PCIe x16 slot features the reinforced ASUS SafeSlot Core+ design to secure graphics cards in place. Three RGB LED strip headers, two four-pin and one Gen 2 addressable, provide onboard lighting. A Realtek Gigabit Ethernet controller and an ALC887 audio codec round out the main specifications.

Reliable and affordable, the compact Prime Z490M-Plus motherboard is a true workhorse. Its 8+1 DrMOS VRM power stage design offers unwavering power, while heatsinks on the power delivery circuitry ensure consistent power delivery to the 10th Generation Intel Core CPU. Memory is given a boost, too, with the ASUS OptiMem trace design pushing memory frequency to speeds of up to 4400 MHz.

ASUS Z490 motherboards will be available from 29th May on all ASUS local authorized platforms. More details will be announced again closer to the date of launch.