Crosshair VIII Impact and Strix X570-I Gaming are aimed at two distinctly different types of user. The Crosshair VIII series heralds the arrival of Impact, the compact motherboard with colossal potential — and a tantalizing prospect for those who want to push the limit of the latest Ryzen 3000 CPUs and memory. ROG Strix X570-I Gaming, by contrast, is for gamers looking to build an exceptional Mini-ITX gaming system, replete with all the essential ROG features, performance and overclocking prowess.

Both new motherboards are engineered to maximize performance from high-core-count (HCC) Ryzen 3000-series CPUs, while staying cool with an active voltage-regulator module (VRM) and chipset heatsink — enabling performance junkies and gamers to embrace serious power in a small form.

Power design that bucks the trend

In an SFF build with an HCC processor at its heart, reliable, high-efficiency cooling is essential to prevent performance-sapping throttling. Both Crosshair VIII Impact and Strix X570-I Gaming feature beefy heatsinks, plus two custom Delta Superflo fans rated to last more than 60,000 hours — amounting to very many years of continuous real-world use. Though featuring different designs to reflect and accommodate the different layouts of the two motherboards, both are specifically configured to cool the VRM and chipset efficiently and consistently.

The new Ryzen 3000-series processors are designed to pair with the X570 chipset — the first desktop chipset to put next-generation PCI Express 4.0 connectivity at consumers’ disposal. Crosshair VIII Impact and Strix X570-I Gaming both have PCIe x16 and M.2 slots that are wired with PCIe 4.0, opening a whole new world of high-performance graphics card and NVMe drive without the worry of bandwidth constraints. Both boards also support the latest Wi-Fi 6 (802.11ax) protocol and can broadcast blazing-fast wireless signals at up to 2402Mbps (2.4Gbps).

As the first Impact in the longstanding ROG Crosshair series, Crosshair VIII Impact is a compact powerhouse based on the Mini-DTX form factor that maintains compatibility with most Mini-ITX cases. Being marginally taller than Mini-ITX allows Impact to exploit this extra headroom, allowing ROG engineers to dedicate more space to the VRM and cooling design.

While the large VRM and cooling array eat up a lot of real estate, Impact stacks up storage, audio and control features onto innovative vertical daughter boards, leaving us spare room onboard to add more connectivity and engineer features normally found on ATX boards into a small-form-factor (SFF) footprint.

For superior storage speed, Crosshair VIII Impact comes with a bundled expansion card with heatsink that allows two M.2 drives to be connected via a SO-DIMM interface and helps control SSD thermals for maximum performance.

As a final flourish, Crosshair VIII Impact even includes a dedicated header for a USB 3.2 Gen 2 front-panel connectors — offering users easy access to future-proof USB Type-C™ (USB-C™) connectivity and the joy of up to 10Gbps transfer speeds.

Like Crosshair VIII Impact, Strix X570-I Gaming’s SFF design does not comprise on the cooling design, so it’s ready for users to fully exploit the latest-generation HCC processors in a small package. The board includes chipset-heatsink heat pipe to conduct toward the fans, where it can be actively cooled. The VRM hosts a beefy heatsink that absorbs virtually all the heat, paired with a downward-force fan to rapidly dissipate the heat.

Tiny systems do not usually offer a ton of cooling, but Strix X570-I Gaming manages to squeeze in an AIO pump header alongside the chassis-fan header. 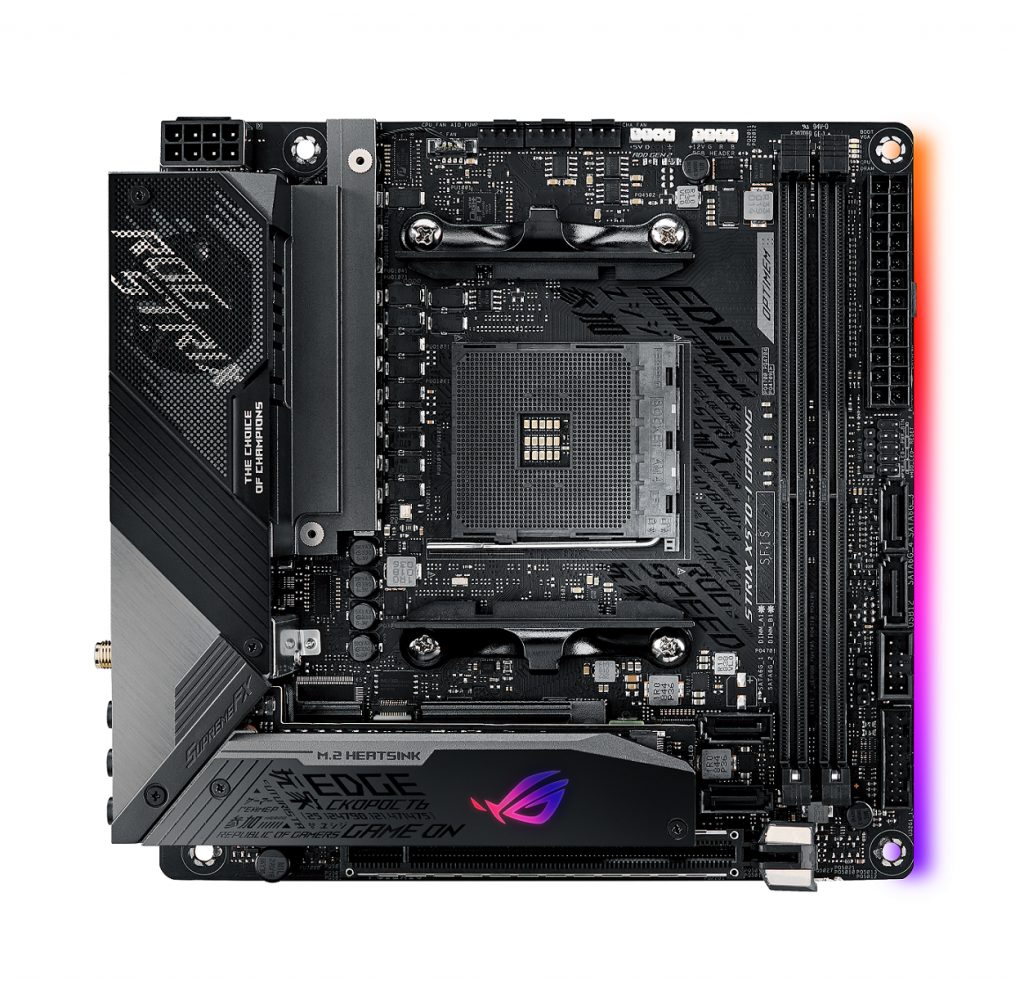 Compact system are usually the most challenging to build, as real estate is limit and space inside the case is tight. Strix X570-I Gaming aids the process with a bunch of DIY-friendly design aspects and features. Clipping off the heatsink, for instance, provides instant access to M.2 storage. As well, the VRM’s heatsink is designed in a way that allows the use of AMD Wraith CPU coolers — a benefit denied to users of some competitor boards.

Strix X570-I Gaming has built-in HDMI 2.0 and DisplayPort 1.4 outputs for home-theater setups and couch-gaming fun, along with the same Intel® Wi-Fi 6 adapter with Bluetooth 5.0 support as the bigger members of the ROG family.

The new motherboard also includes two convenient extension cables: one for the front-panel audio, and another for the power and reset buttons. This allows users to connect these cables without cramping their hands and minimizes the risk of nicks and cuts inside the tiny case.

Pricing and availability will be announced at a later date.