It has been more than two years since the resurgence of AMD with their new Ryzen CPUs. Even with Ryzen’s initial launch, there were already many conversations about the product’s next generation architecture. Thankfully, with AMD’s COMPUTEX 2019 announcement of the new 3rd Generation Ryzen processors, tech enthusiasts got what they wanted. It’s finally time to reveal these brand-new CPU that will rock the world.

In the past, AMD’s technology was always seen as lacking behind their competition in terms of performance. This time, initial results showed that their new products is able to be on par, if not outperform Intel! Amazingly, the new AMD CPUs not only have more cores at the same price point, but also consume less power!

This is largely thanks to a more advanced 7nm fabrication node which they built their technology on, as well as improvements to their CPU architecture. This improvement has led to an overall IPC uplift of approximately 15%.

Starting today, a full lineup of AMD Ryzen 3rd Generation processors ranging from Ryzen 9 to Ryzen 5 will hit the stores. In our labs, we had the privilege to test out the new Ryzen 9 3900X and Ryzen 7 3700X for the past week. This should allow us to better understand what these two new processors stand for, and the real value proposition which they bring to the market. Of course, we will definitely also want to understand the performance in various usage scenarios and if these processors overclock well. 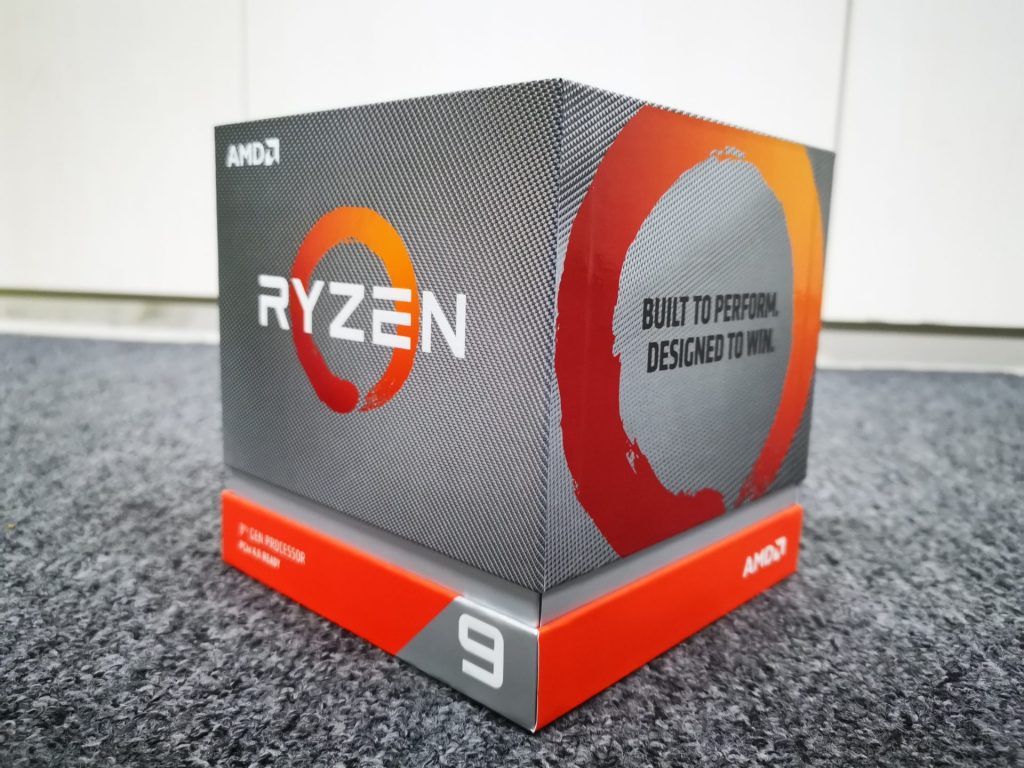 For the first time, AMD will be introducing their Ryzen 9 series, which are at least 12 cores and above. There are currently two products in the series, namely the 3900X and the 3950X. They are a 12-core and 16-core variants respectively. The former will be available at launch, while the latter will be available some time later. 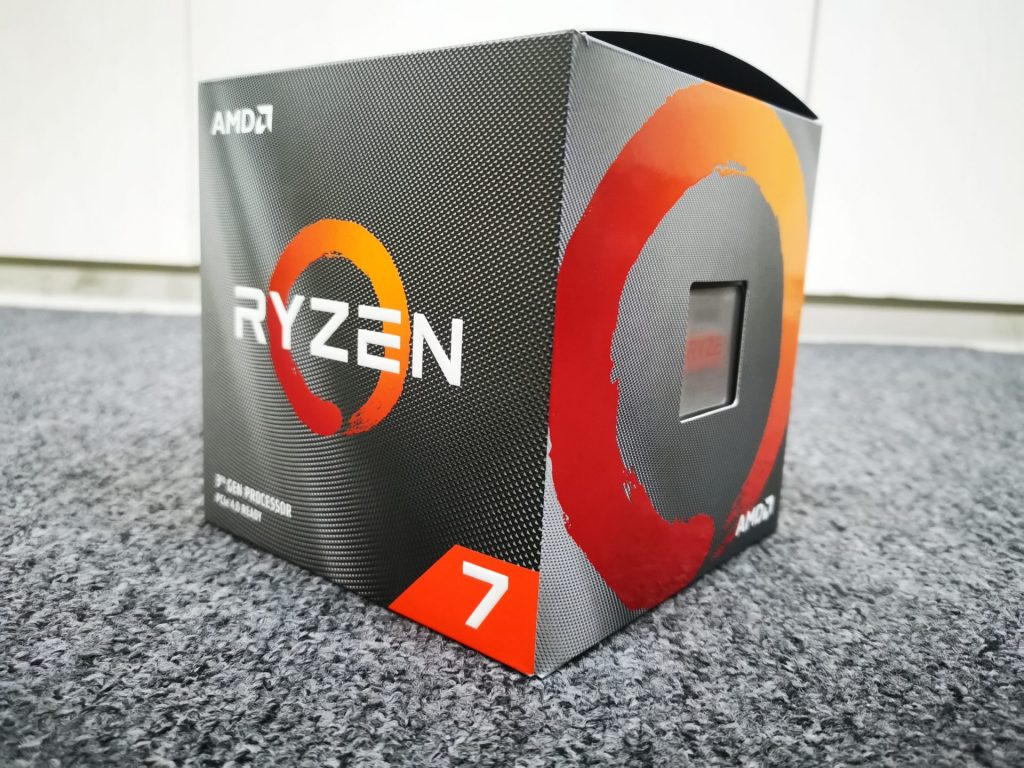 On the other hand, the Ryzen 7 3700X will replace the current Ryzen 7 2700X. This is an 8 core variant which was once considered the flagship for the Ryzen processor (non Threadripper) lineup. With the new architecture, it would be interesting to see how much improvements have been made between the two generation of processors.

Both processors come with the AMD Wraith Prism RGB CPU Cooler in the box. There have been many positive comments on this cooler, as it performs quite well despite it being a stock cooler. This CPU Cooler even comes with RGB lighting features and can provide a decent look for your overall build. 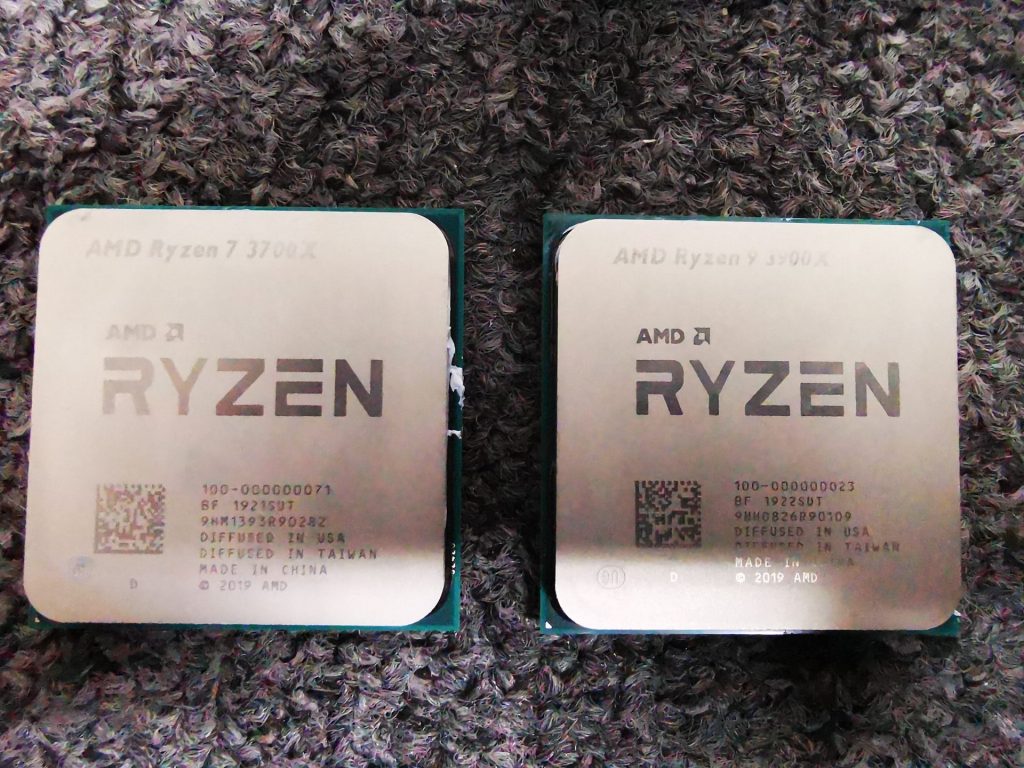 We are trying to measure the performance improvements on the 3rd generation processors as compared to the 2nd generation. The main usage test areas include (1) General Compute, (2) Creativity and (3) Gaming workloads. Also, we will test the raw performance of the setup’s main CPU, memory and storage performance. We understand that while this review focuses more on the CPUs, we are actually testing the whole AMD 3rd generation Ryzen and its X570 chipset platform as a whole.

To ensure that you will also achieve the same results as what we have tested, we ensured that we keep our test setup simple. Instead of using any third-party coolers, we will utilize the AMD Wraith Prism RGB CPU cooler that comes together with both the Ryzen 9 3900X and Ryzen 7 3700X.

For our motherboard, we will be using the Gigabyte X570 AORUS Master, which is one of our favourite motherboard known for its reliability and good cooling features. Of course, the pinnacle of the review is finding out how well these setups can overclock. Stressing the system will bring out the true capabilities of the setup, which says a lot about the whole platform.

The tests that we will run will be as such:

System Specifications are listed below: 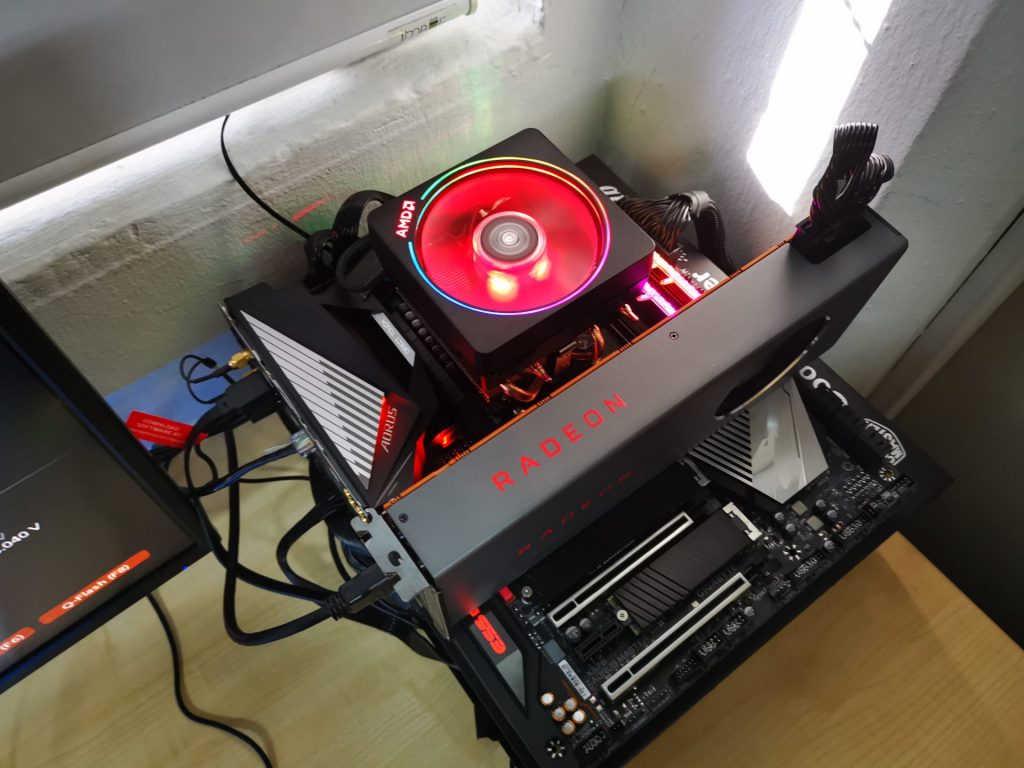 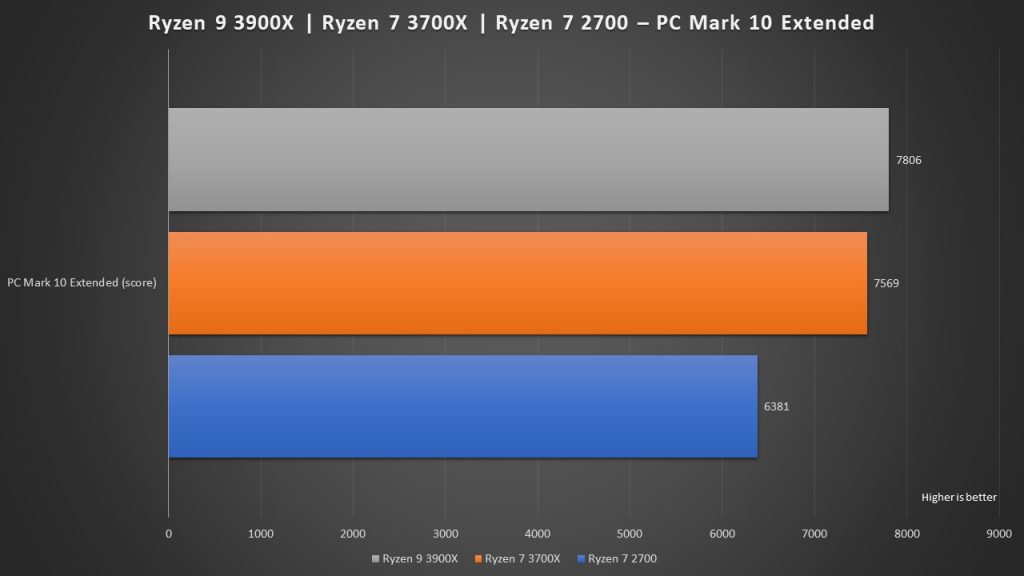 Despite the fact that the Ryzen 9 is a 12-core processor, in general compute tasks, there wasn’t a huge improvement over the Ryzen 7 3700X. This could be the due to the nature that most general tasks aren’t heavily multithreaded. Therefore, buyers should consider their use case before purchasing the CPU of their choice, especially when price is a concern. 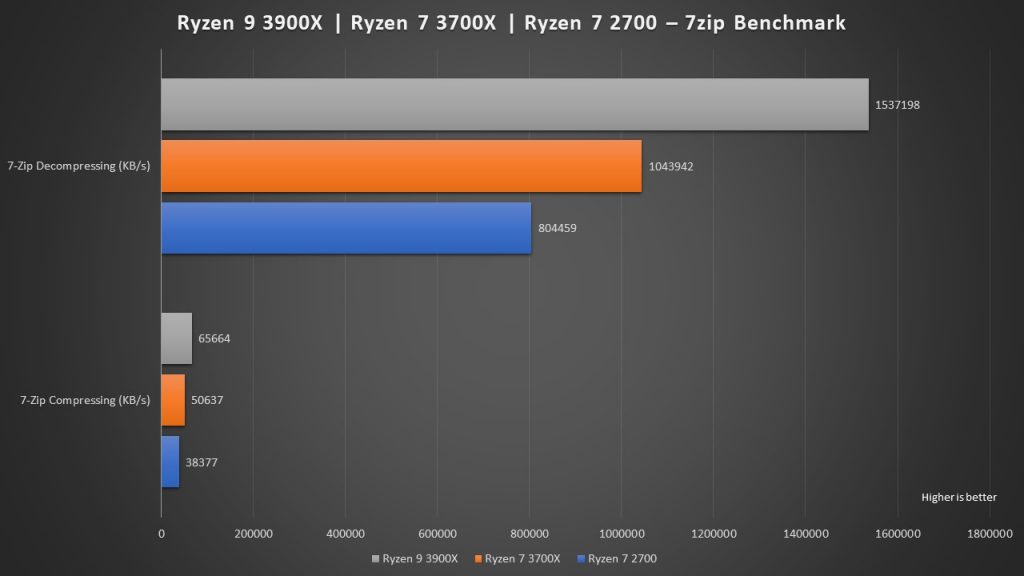 In the 7-zip test, we can really see the prowess of the Ryzen 9, being able to produce decompressing results almost twice as fast as the Ryzen 7 2700 even though it has only 50% more cores. For the compression test, being the highest clocked in the three test subjects, the Ryzen 9 still remains to be the fastest of them all. 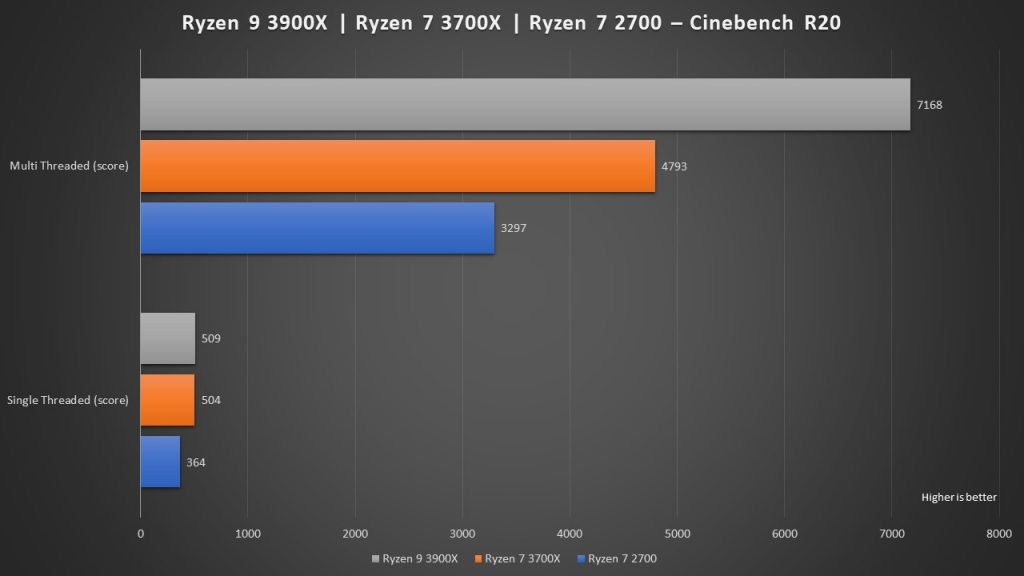 In the new Cinebench R20 benchmark which renders an image using the CPU, we can understand how these test subjects performs in both single and multi-threaded use cases. For the single threaded benchmark, there was a 38% improvement in terms of score for the Ryzen 7 3700X when compared to the Ryzen 7 2700.

Of course, being a 12-core processor, the Ryzen 9 3900X still tops the charts in the multi-threaded test. We can also see that the Ryzen third generation processors can scale quite well, as the score between the Ryzen 7 3700X and Ryzen 9 3900X are similar when extrapolated. 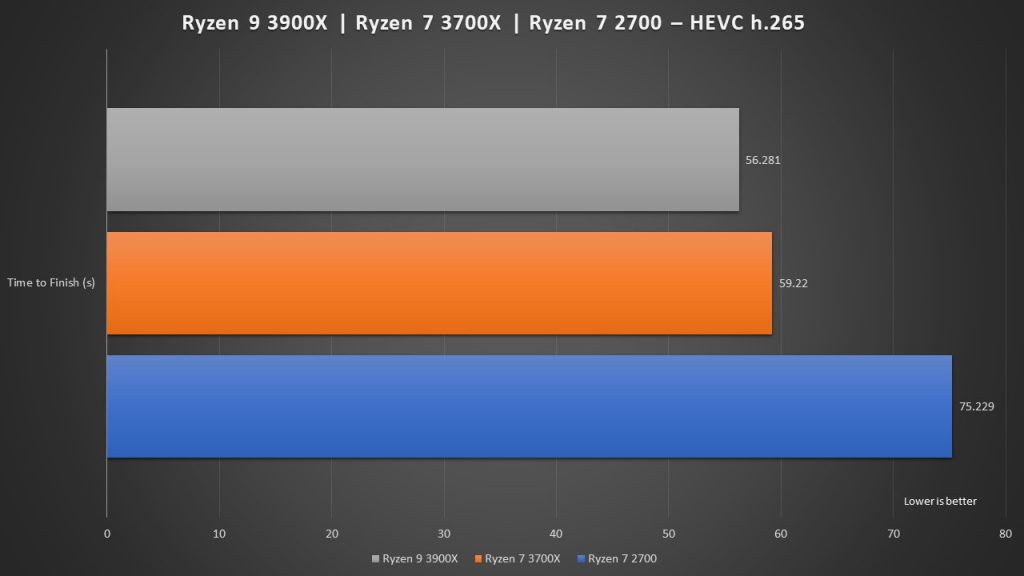 Yet again, the new 3rd Generation Ryzen processors has a clear lead. The shorter time taken by the Ryzen 9 3900X to complete the task when compared to the Ryzen 7 3700X should be largely attributed to its higher core clock. 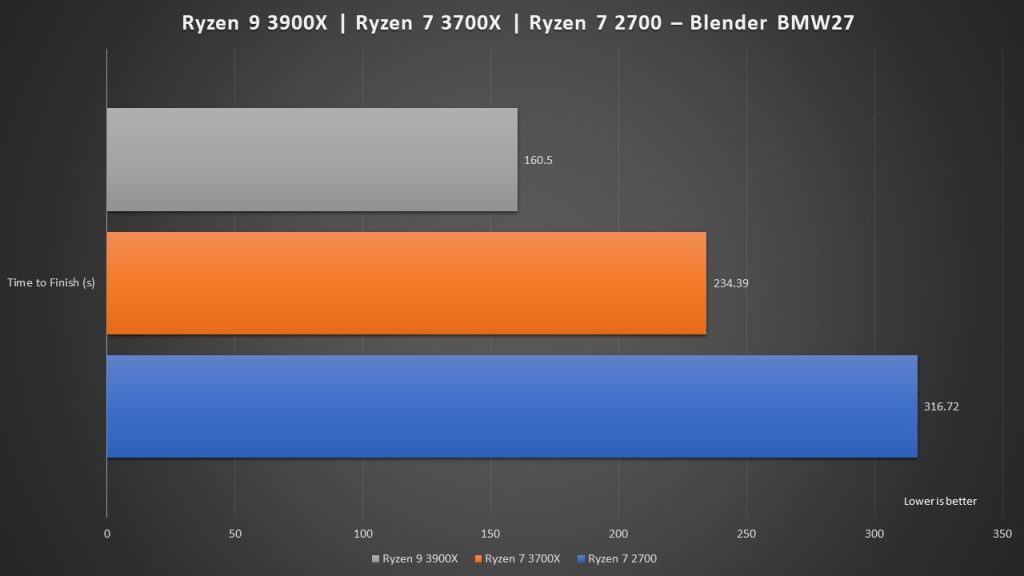 Blender renders a BMW car model for this test. Similar to the Cinebench benchmark, it is expected that the higher the number of core counts, the better you would get at completing this task. It is also apparent that the 3rd generation Ryzen processors is optimized for creativity workloads, as the Ryzen 7 3700X was able to performs 72 seconds faster than the Ryzen 7 2700 on the same workload. 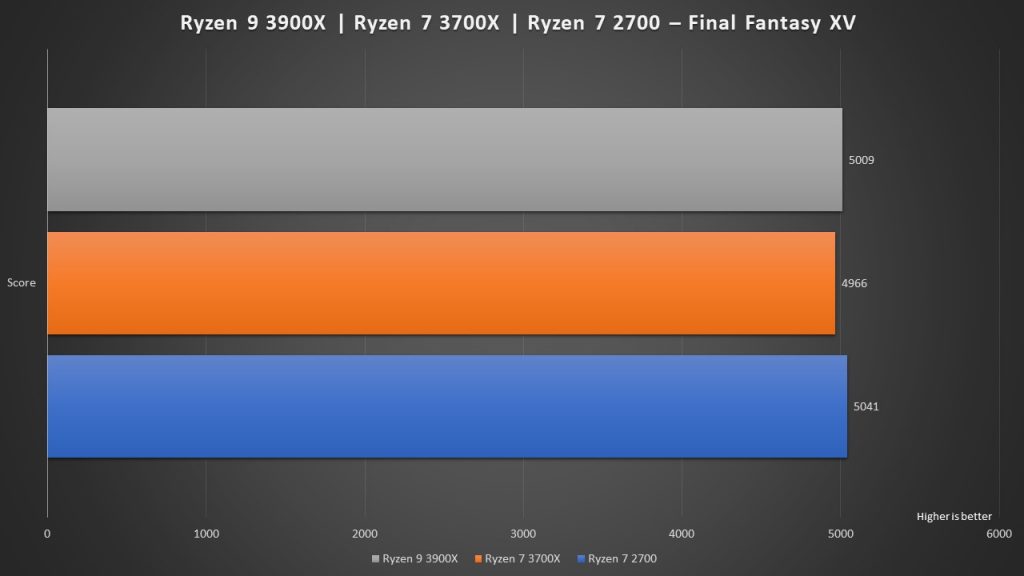 In our opinion, there wasn’t too much of a difference in the performance of games when testing these CPUs. However, the main advantage of the 3rd Generation Ryzen processor is that they can run at a much higher memory frequency. As our setup were already configured with the same memory speeds, their results were similar. The Ryzen 9 had an edge over its smaller siblings, but it still seems that it will be largely game dependent. 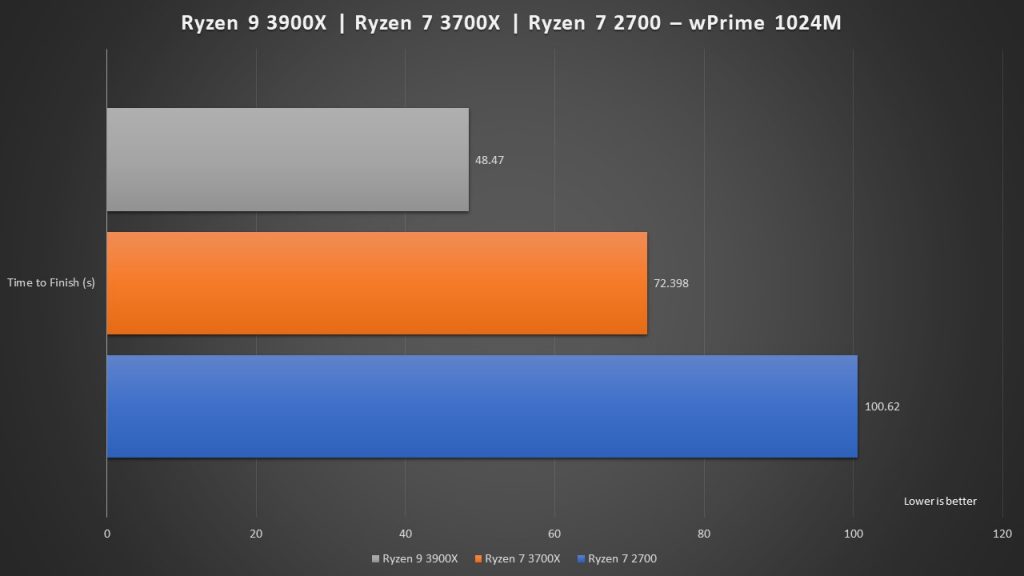 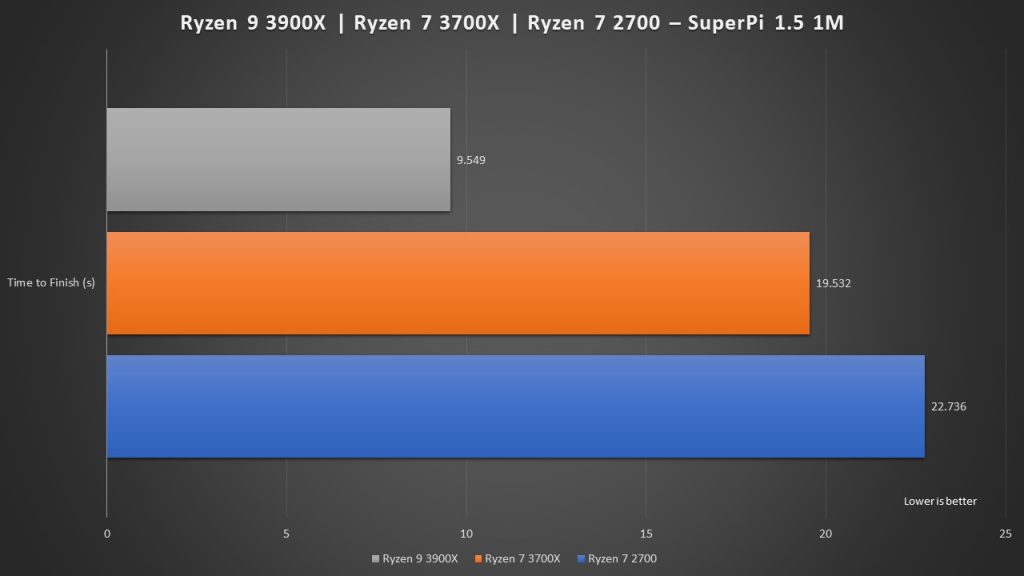 No surprises here for the synthetics CPU benchmarks, as it is obvious that the Ryzen 9 3900X remains to be the fastest, followed by the Ryzen 7 3700X and the Ryzen 7 2700. 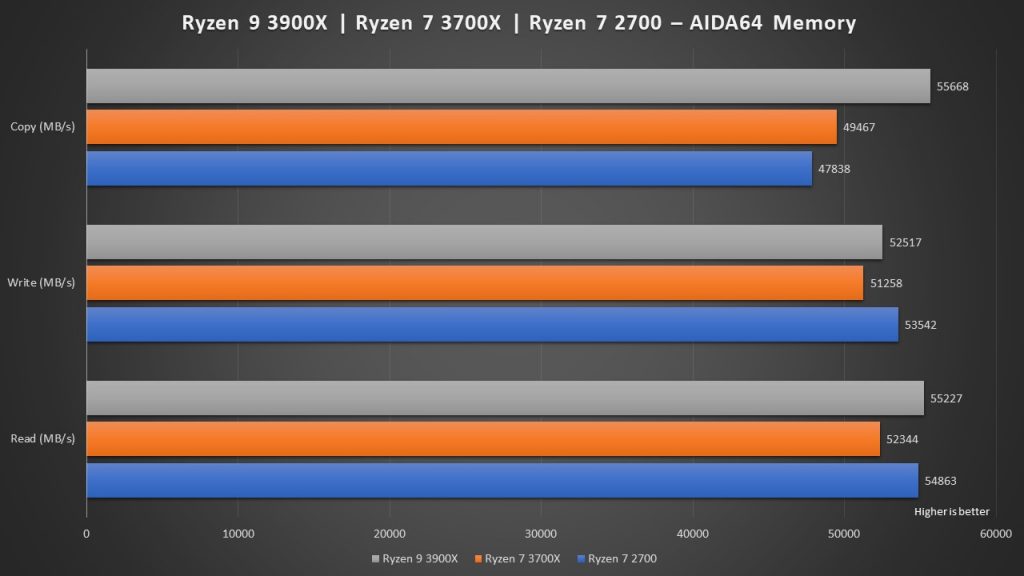 In the past, with the 2nd Generation Ryzen processors, it would be difficult to reach 3600MHz on the system memory without using a memory timing that was more loose. However, running on the GSkill Trident Royal (with the default 3600MHz) was a breeze with the new X570 platform and the 3rd generation processors. The memory performance of the Ryzen 9 was obviously at the top, but we realised that the Ryzen 7 3700X seems to be trying hard to keep up with the Ryzen 7 2700.

When AMD announced the new X570 chipset with the 3rd Generation Ryzen processors, they also introduced the new PCIe 4.0 standard to the whole industry. For the first time, PCIe 4.0, which doubles the bandwidth of its previous version, was made available on a consumer platform.

SSDs which were fast saturating the bandwidth of PCIe 3.0 finally had the chance to perform even better than before. This time, the test above that was completed with a single AORUS NVMe Gen4 1TB SSD showed speeds that were never seen before. We were getting speeds of almost 5GB/s! That’s simply amazing.

Overclocking the Ryzen was rather straightforward. Thanks to the new 7nm architecture, the CPUs performed cooler than its predecessors, and warranted a higher frequency. As such, we managed to push the 12-core Ryzen 9 to 4.25GHz and the 8-core Ryzen 7 to 4.3GHz before they reached their limits. Do take note that we were only using the stock cooler that were provided out of the box. These results could have been even higher if a better cooler was used.

One of the key improvements of the 3rd Generation Ryzen processor is its huge improvements in memory support. We were able to finally reach high memory clock speeds on the new Ryzen 7 and Ryzen 9. By pushing the limits of our GSkill RAM, were managed to reach a speed of 4266MHz on the memory, up from its reference 3600MHz. The timings were also changed to achieve such a speed.

Below shows the result of our overclocking. 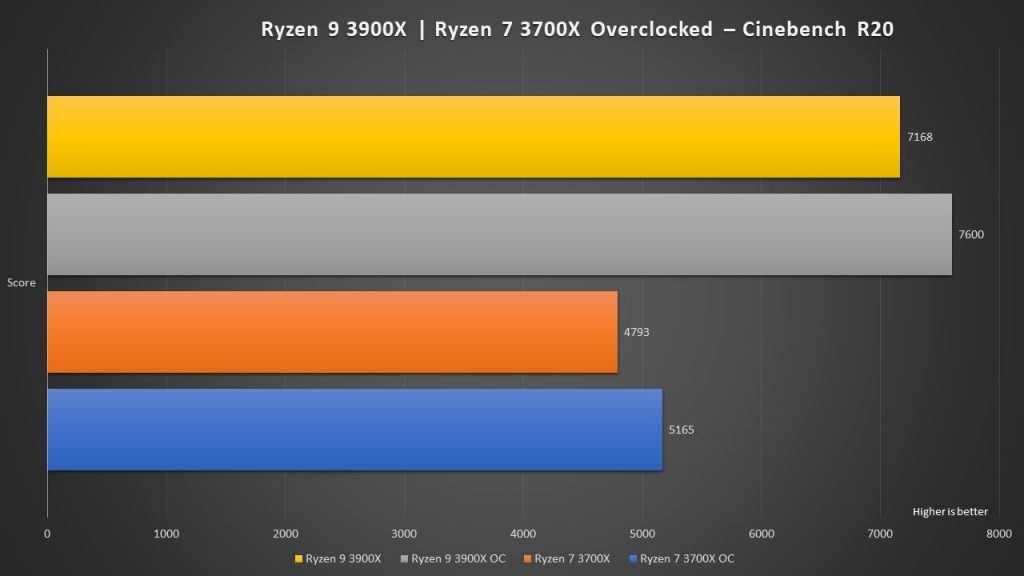 We expected that the 3rd Generation Ryzen processors will perform cooler and consumes less power per core when compared to its predecessors. These results showed exactly the case. 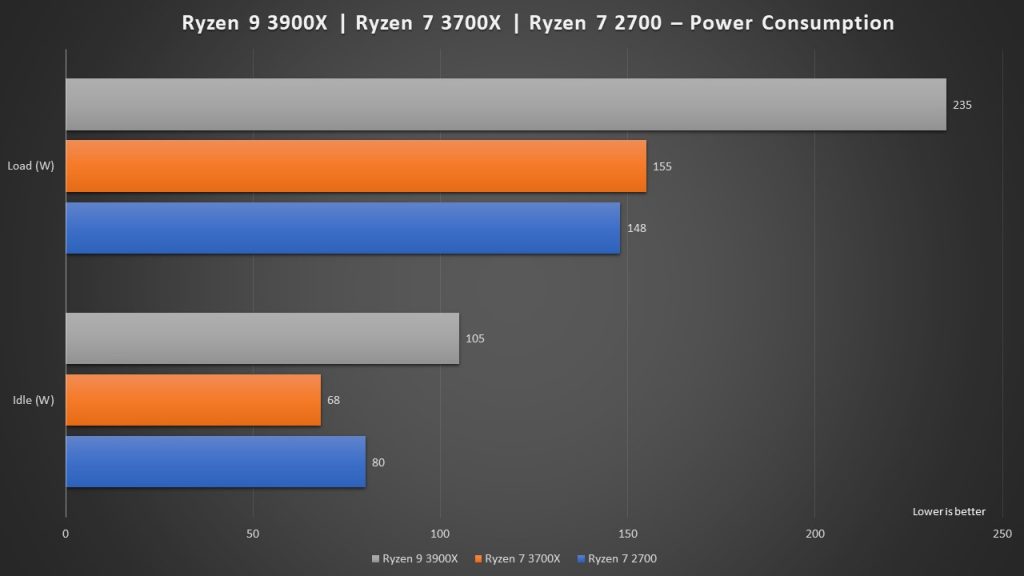 The power consumption of the Ryzen 9, being a 105W TDP part, was considerably astounding. The whole system recorded a high of 235W when running the Cinebench R20 benchmark 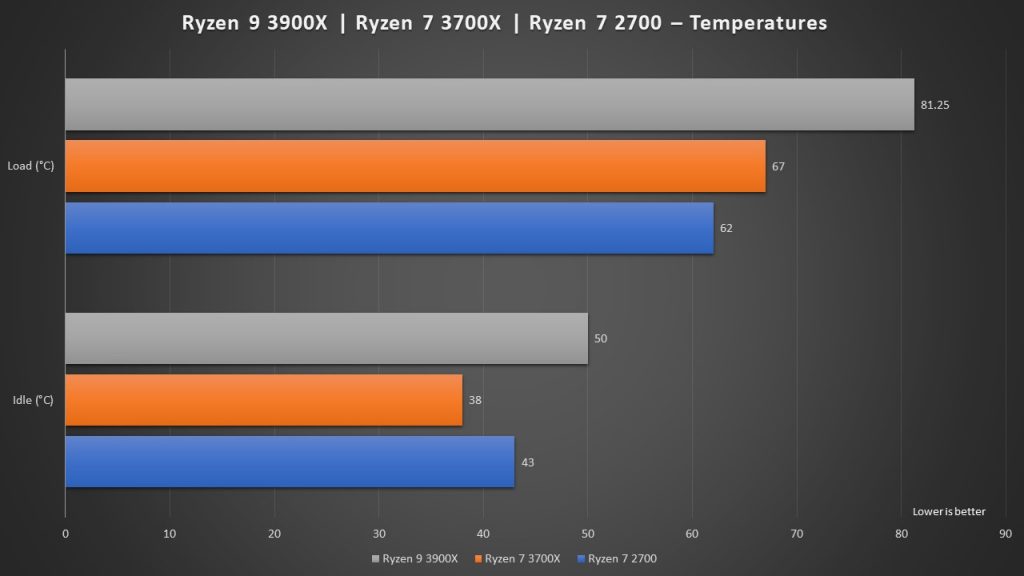 The new 3rd Generation Ryzen processors, particularly the Ryzen 9 3900X and Ryzen 7 3700X showed immense potential in our test. They were performing extremely well, and the products showed huge improvements when compared to its previous generation. It’s simply amazing how much performance increase could be achieved by AMD just over a short span of a year.

When the first generation Ryzen processors were launched, they were of great for value when compared to Intel’s offerings. This time, the third iteration of the processor has showed us that AMD is not only able to beat the competition in value, but perhaps performance as well.

We are definitely looking forward to see what competition has got to offer. The whole game is just starting to get really interesting.