In the latest graphics card refresh by NVIDIA, they introduced three new variants to their RTX lineup, namely the RTX 2060 SUPER, RTX 2070 SUPER and RTX 2080 SUPER. While the RTX 2080 Ti will continue to be the cream of the crop, the new NVIDIA GeForce RTX 2080 SUPER will be replacing the current GeForce RTX 2080 graphics card. It’s definitely a win for consumers, as they will be expected to achieve better performance within the same price range.

The RTX 2080 SUPER is extremely similar to the current RTX 2080. Its performance improvement is largely due to the increase in compute units and a higher clock rate. Additionally, these new SUPER graphics cards still utilize the same Turing architecture and process technology.

Today, NVIDIA officially launched the new GeForce RTX 2080 SUPER graphics card. This new graphics card will be available as a Founders Edition reference card, while variants will also be available from AIB partners with customized solutions. We have gotten our hands on the NVIDIA GeForce RTX 2080 Founders edition earlier for our review – herein lies more details and performance results. 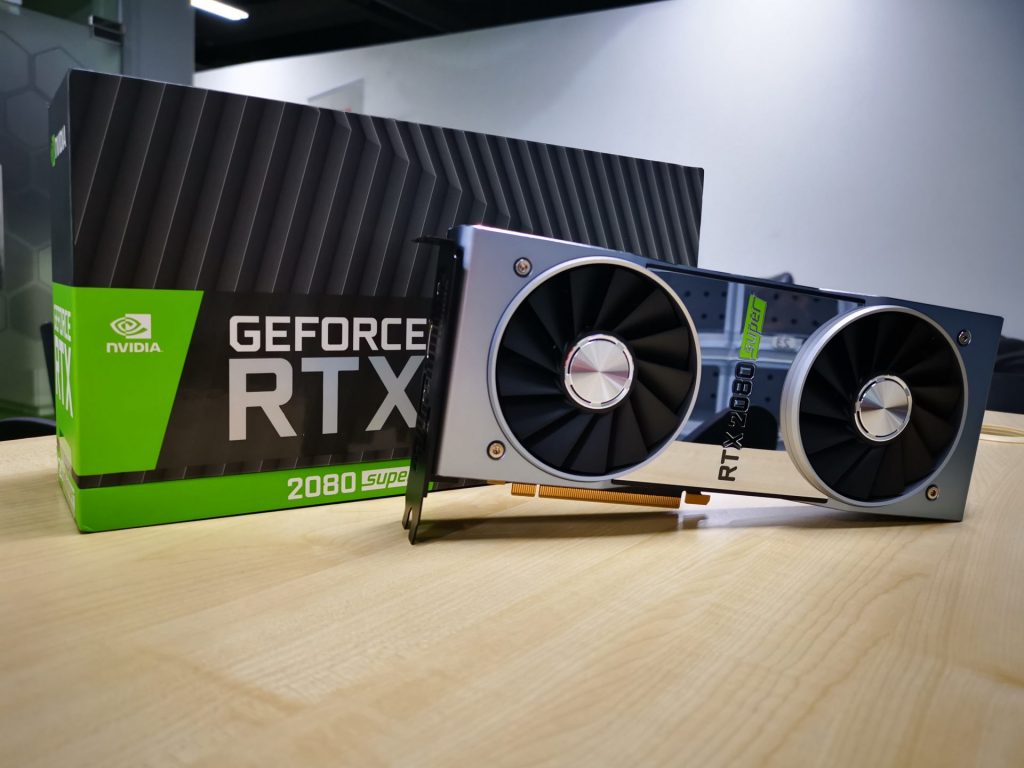 Based on the specifications, we can see that the RTX 2080 SUPER is not made to compete with the flagship GeForce graphics card. Perhaps, the refresh for the RTX 2080 SUPER graphics card can be seen as more of a response to competition from the red camp. If you have read our previous review on the Radeon RX 5700XT, you will understand that the RX 5700XT tackles straight onto the RTX 2070. Therefore, the refresh for the RTX lineup was likely to ensure a clear lead for the RTX 2070 SUPER when compared against the RX 5700XT. 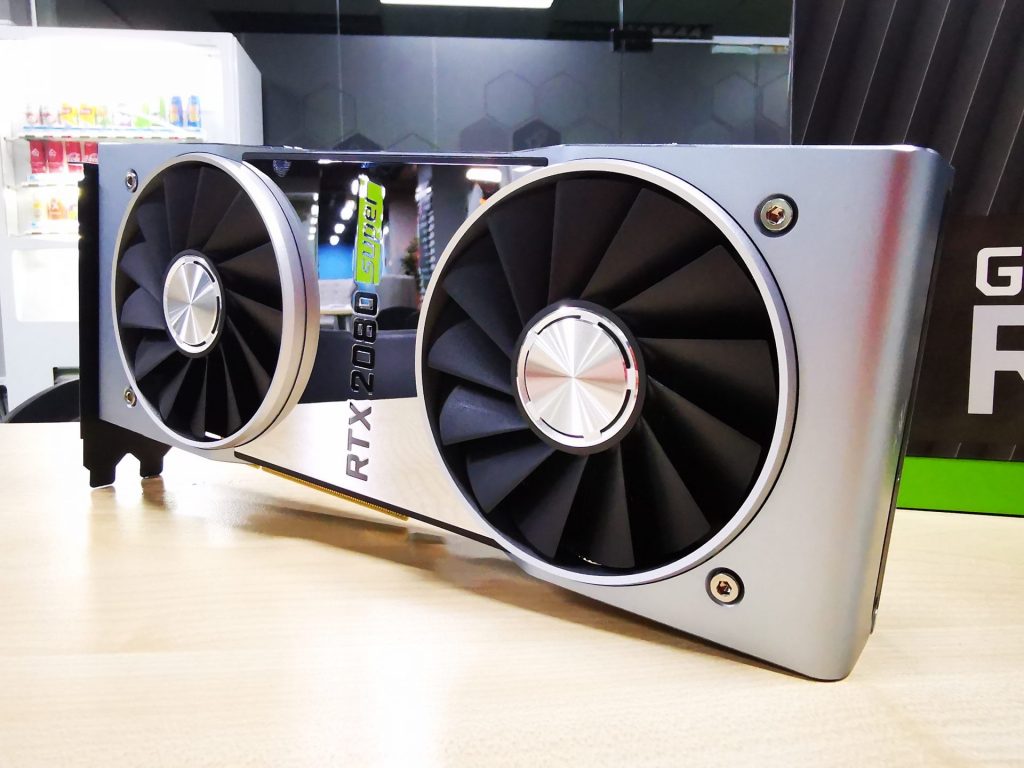 The GeForce RTX 2080 SUPER looks stunning. Unlike past reference designs that performs poorly in heat dissipation and doesn’t look that good, the GeForce RTX 2080 SUPER Founders Edition excels in both. We must really give some points to NVIDIA for their hard work in the Founders Edition graphics card. It’s a product that I would really want to include in my system build, as feels truly like a premium product. We can also see the focus on the details that sets this card apart from other designs. In this case, the Founders Edition cards gave us a very professional look without being too showy. 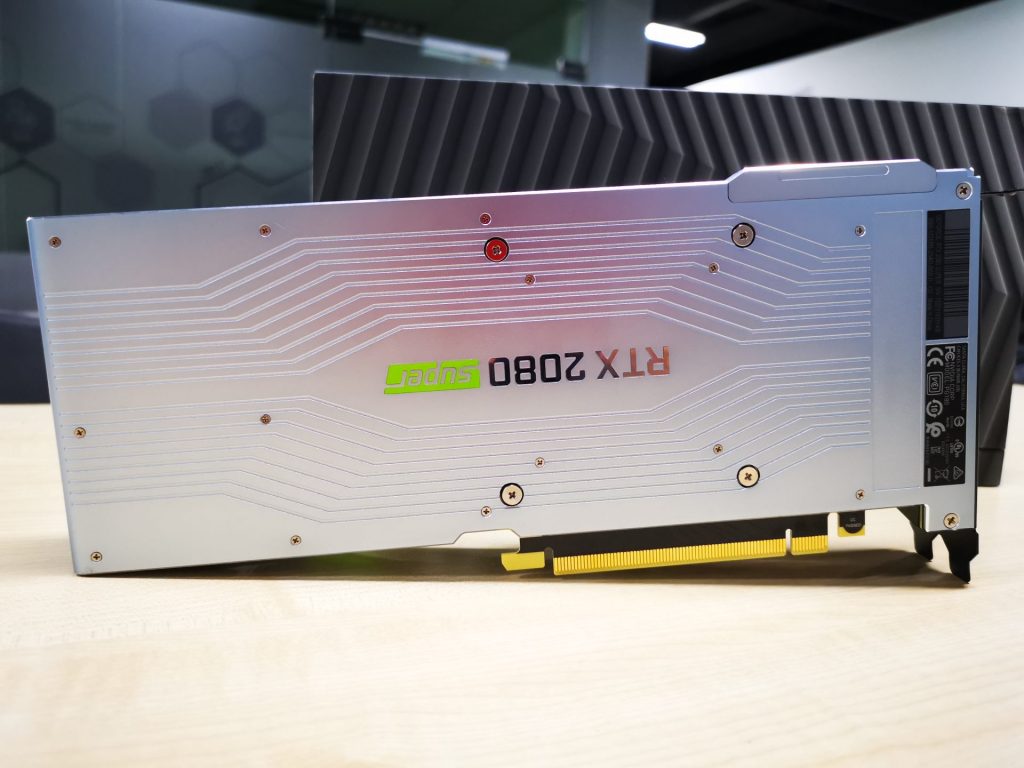 Like other Founder Edition graphics card, the GeForce RTX 2080 SUPER Founders Edition comes with two axial fans that brings cool air directly onto the heatsink. An aluminum enclosure wraps the entire card, but leaves the top and bottom open for proper ventilation. This full metallic design ensures that the card is able to dissipate heat away quickly, enabling it to run at full performance.

The NVIDIA GeForce RTX 2080 SUPER Founders Edition also comes with 5 display output ports. They are 3 x Display Port, 1 x HDMI Port and a USB-C Virtual Link Port (which supports the latest VR headsets). This graphics card has to be supplemented with a single 6-pin and 8-pin power connectors to properly perform at its specified speed.

We want to find out the performance of the new GeForce RTX 2080 SUPER with reference to the other SUPER graphics cards. This should give system builders a good gauge of the value that each card brings, and help them to better make their decision when selecting the right card. Furthermore, we want to find out if the GeForce RTX 2080 SUPER is actually capable of running games at 4K resolution.

The tests which are going to run are as follows. We will run the game benchmarks at 1080p, 1440p and 4K resolutions to find out their capabilities. 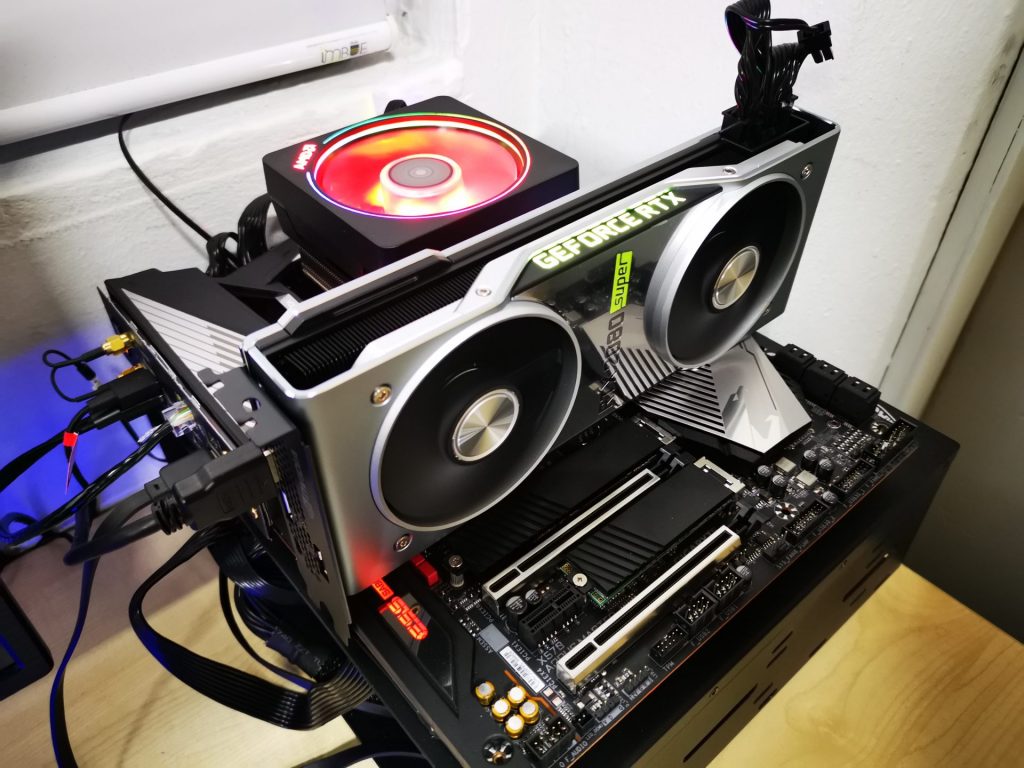 The graphics cards are running at stock settings and no additional tweaking/overclocking were done on them. You should be able to achieve these results without any special modifications. 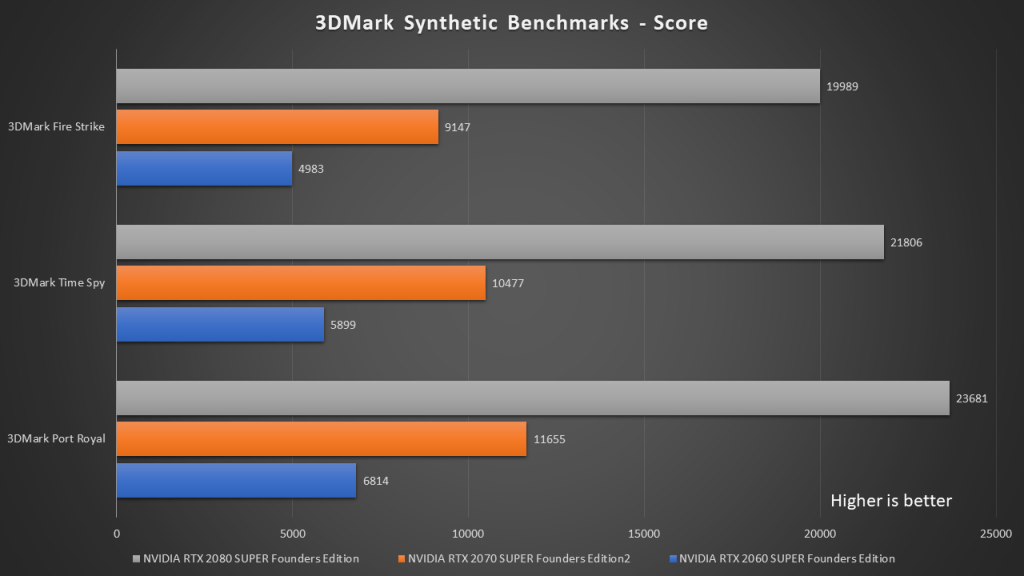 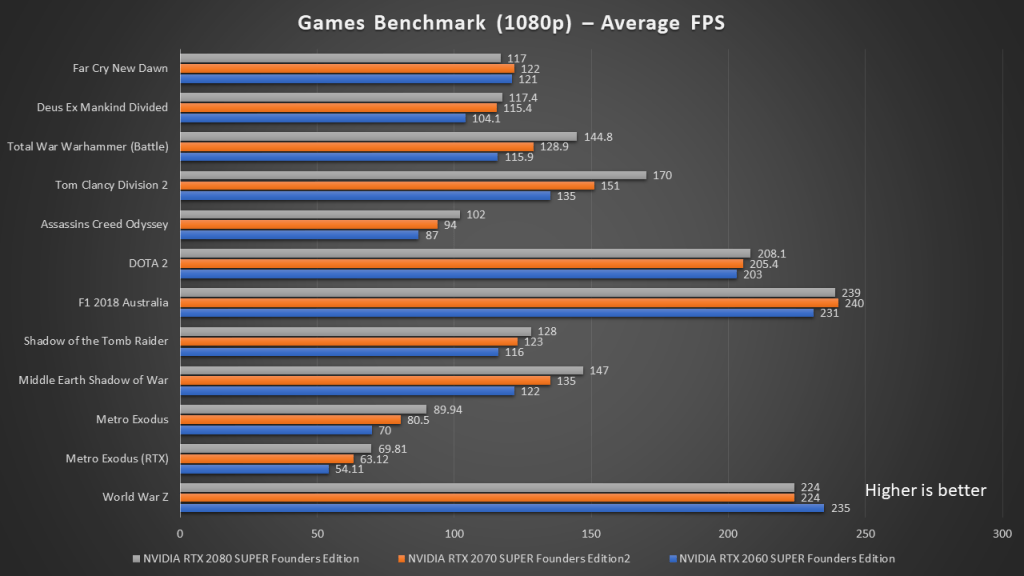 There is no doubt that the SUPERS has what it takes to handle games at 1080p resolution. In fact, they are performing much better than expected, and at times, they are reaching the saturation point of maximum FPS for the games. Therefore, if you only own a single 1080p monitor, it will probably make sense to go for something cheaper. The SUPER products will be too good for gaming at 1080p resolution. The differences start to set in when it comes to 1440p resolution. As we can see, the RTX 2080 SUPER still manages to produce very high frame rates that is fundamental for a good gaming experience. Many graphics card of today suffer when it comes to gaming at 4K. The RTX 2080 SUPER still performs rather well, producing more than 60 FPS for games that are slightly less graphics intensive. There is also a clear distinct when it comes to our tests in 4K, as the RTX 2080 SUPER is the only card out of the other two SUPERs that performs consistently with most of the frame rates over 60FPS. 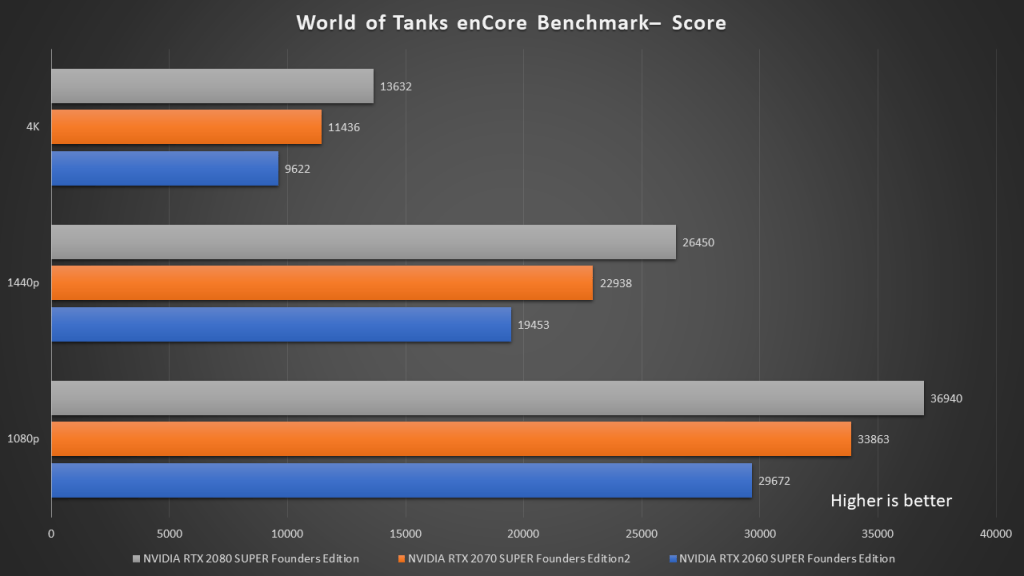 The scores for Final Fantasy XV and World of Tanks enCore also showed very similar results. However, based on the results, we can conclude that synthetic benchmarks such as 3DMark does not reflect true performance of graphics card when it comes to gaming scenarios. As expected, the NVIDIA RTX 2080 SUPER still takes the top spot when it comes to games. 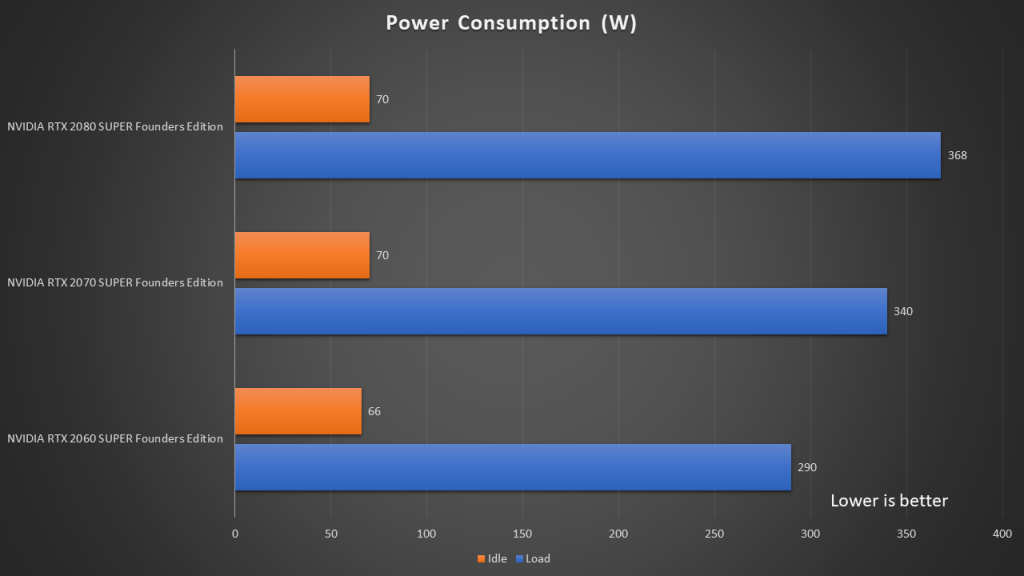 As all the NVIDIA GeForce SUPER graphics cards are based on the same architecture and technology node, it is expected that the higher the number of compute units and clock speed will require a higher voltage to sustain them. As such, the power requirements of each card when under load differs accordingly. This is also why each of these cards also requires different supplementary power inputs. 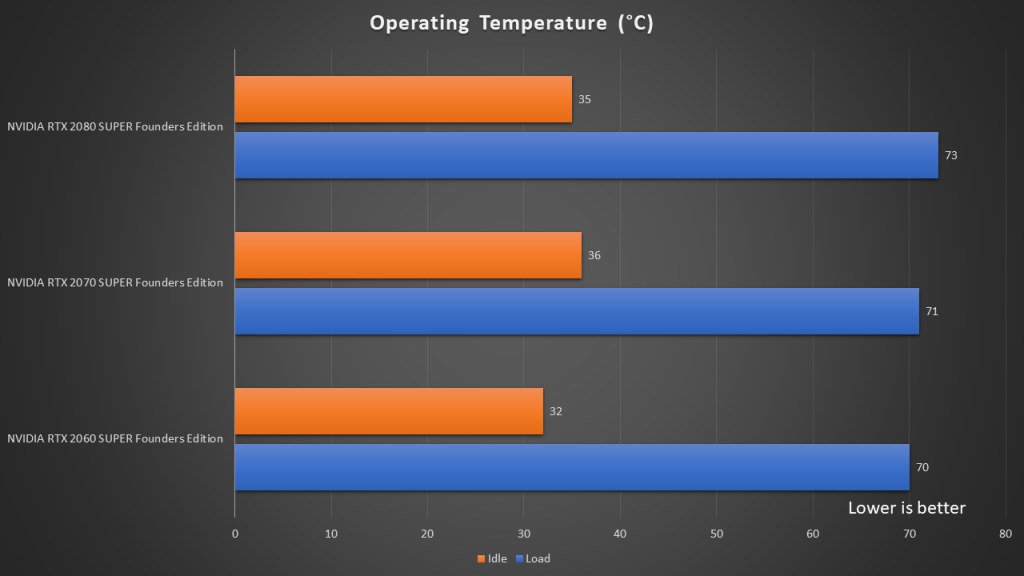 In fact, even though the cards consume quite a high amount of power when under load, its cooling solution has been optimize to effectively cool the card. This also means that these GPUs are able to perform very efficiently as less energy is lost as heat. For the performance which they were able to achieve, we have to say that the NVIDIA Turing GPUs, and more specifically the NVIDIA GeForce SUPER graphics cards, are pretty power efficient. 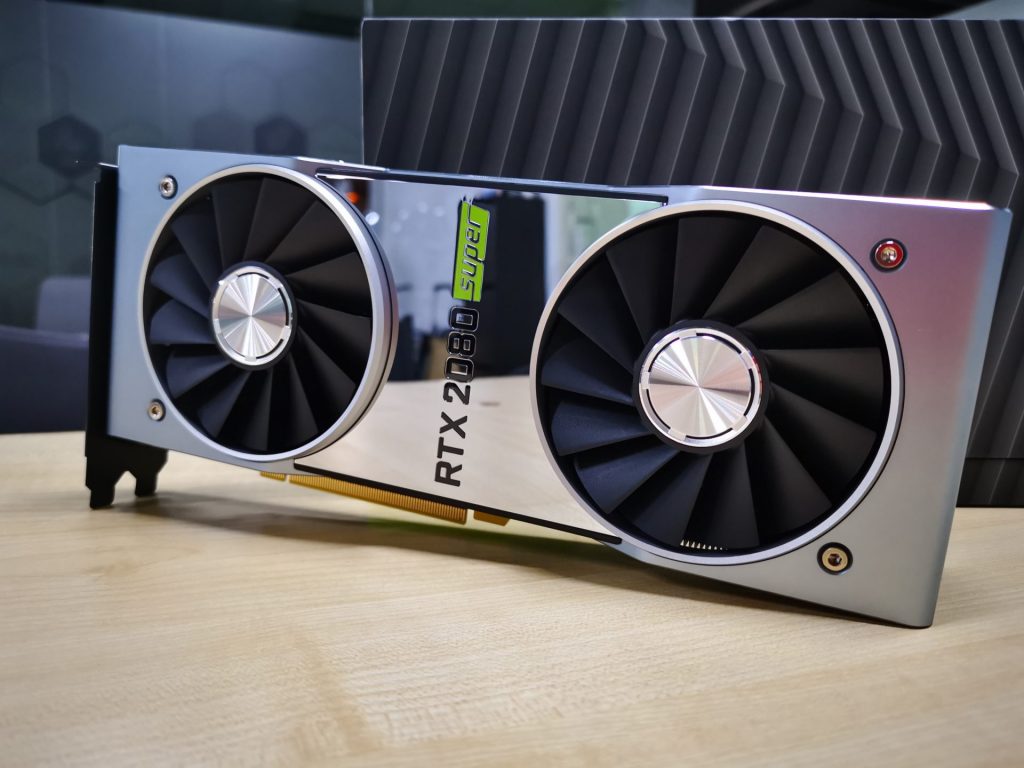 The NVIDIA GeForce RTX 2080 SUPER graphics card has shown us the true value that it brings onto the table. Its behemoth graphics processing capabilities makes it the capable of producing high average frame rates for most popular games in the market, especially at 4K resolution. Unfortunately, the RTX 2070 and RTX 2060 SUPER are unable to attain. It hits the sweet spot for gamers who wants to upgrade their monitor to one with 4K resolution, without the high prices of the flagship RTX 2080 Ti.

The heated competition within the GPU space is all about filling up gaps within the market. Sad to say, AMD has no product as of today to provide the same level of performance that the RTX 2070 SUPER, and of course, the RTX 2080 SUPER assures. The NVIDIA SUPER RTX 2080 SUPER filled the gap for an entry level 4K gaming graphics card. Despite it being a rather expensive graphics card to own at US$699, there is no other reason not to pay the premium for its performance.

Let’s just hope that AMD can level up their graphics processing game with future releases and be more competitive when targeting the high end side of the market.