Easy to pick up and play, hard to master

The fourth installment of Forza Horizon sees players driving in the big ol’ United Kingdom. With a ton of cities and countrysides to race in, and the NVIDIA and AMD giving their blessings, the recently launched Forza Horizon 4 is rearing to get into the hands of racing enthusiasts. Although we were facing some technical issues with the game initially, Playground Games promptly released a patch to fix it and were ready to hit the tracks.

The variety of the terrains in Forza Horizon 4 is rather remarkable, like their (above) intro sequence of the seasons. Set in the UK, it features street races in the cities (i.e. Edinburgh) to the (not-so) calm countrysides of England. It does not stop there either. You can even ride in the mountainous snowy slopes of Scotland!

Even the most captivating scenery that blazes past your windscreens can get repetitive for even the most hardcore nature-lover. With the introduction of a Season/Weather system, your races switches between sunshine, rain, and even snow. It even mixes between seasons, with a partially frozen landscape, where racers can splash through pools of puddles waiting to turn to ice.

Furthermore, driving around in the stunning world of Forza Horizon is extremely smooth at 60 FPS. Any mid-tier gaming PC should perform wonderfully without much hitch.

Not only does the looks of the landscape change dramatically, you have to watch out for other variables when driving. One such aspect is the change in temperature between seasons, affecting your vehicles’ performance and you might have to change tires to improve its handling. This widens the complexity in the game, challenging players to master the terrains and seasons. 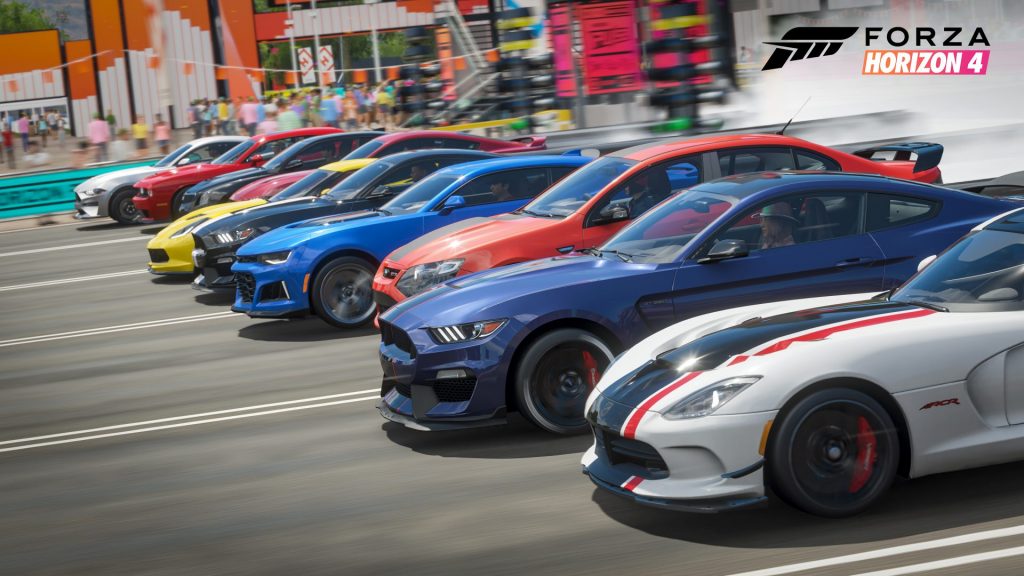 With a bigger focus in online multiplayer, the game might bring Drivatars while you are completing your singleplayer campaign. These are AI racers that simulates the actual players’ driving behavior, adding pseudo-online elements to your offline experience. This is probably to entice you in racing with other players, where races can grow up to 72 drivers. Worried about griefers? Don’t. There is no need to as physical contact is not possible unless you specifically select an online mode to compete in. If you can hit their cars, they are probably Drivatars.

Remember the weather system that was brought up earlier? Forza Horizon 4 now integrates this into the online scene with week-long seasons with their own unique races. However, not everything is about competition in Horizon. There are also events where players can come together to beat challenges, and cooperate to score a certain amount of points in various objectives. The game also rewards you with Forzathon Points (FP) which can be used to redeem rare vehicles as well as meme-worthy outfits/emotes. Playground Games made an amazing decision to not include any microtransaction into Forza Horizon 4, meaning you get what you paid for. A rare gem indeed.

Coming fresh from Forza Motorsport 7, there is a clear ease in learning and playing Forza Horizon 4. Drifting is rather simple to perform and control, while it is not the same for Motorsport 7. This brings flashbacks to the arcade-y Daytona days in the early 2000s, where anyone can just pick it up and enjoy it. This is all thanks to its lower skill floor, allowing non-racing enthusiasts to quickly learn how to maneuver the racing tracks.

For those who are looking for something more, not to worry. The game does require some learning to actually master it. This coupled with a progression system which rewards you surprisingly promptly and continuously, lengthens the longevity of this racing game and kept me coming back for more.

Racing fan or not, this game is immensely addictive. Racers are continuously rewarded while playing. The transition between races and general exploration are extremely seamless, think Witcher 3 or GTA 5 which hides the loading screen well enough to not be noticeable. Impressed is one an understatement for a racing title, and it definitely one of my favorite.