Hong Kong — September 4, 2018 — Today, Ubisoft® announced the For Honor: Marching Fire PC Open Test, taking place from September 6 to September 10 exclusively on PC. Players participating in the PC Open Test will be able to choose from all 22 heroes, including the four new Wu Lin fighters, and choose to do battle in Duel and Breach Modes, with all three Breach maps available in PvAI, PvP and Custom Match. The PC Open Test will also introduce Perks for the first time, a new system that will replace Gear Stats. Players can pre-load the Open Test on Uplay PC starting September 4.

Coming free for all players as part of the For Honor: Marching Fire update, launching October 16, Breach Mode is a strategic 4v4 PvP match which allows players to live the fantasy of storming or protecting a well-fortified castle. Attackers must work together to storm the castle gates and kill the commander of the castle, while defenders must either take down the battering ram or kill all attackers to protect the commander.

The PC Open Test will also be the first time players will experience some of the new Marching Fire features including the Victory Celebration Screen, a new responsive dialogue system, and more. The Victory Celebration Screen will celebrate the winning team of each match by showing off those players’ customizations and stats. They will be showcased with special poses at the end of each match. The PC Open Test will contain the default pose, while new and more varied poses will be available at the launch of Marching Fire.

The new responsive dialogue system brings the Heroes to life through an immersive speech realization system. Characters will now interact with one another through short dialogues based on their personalities and the context of in-game situations.

Seasoned warriors who own the For Honor base game can now pre-order the Marching Fire expansion for $29.99, available as a digital edition only. The expansion grants access to Arcade, the new PvE mode that pits the player against challenging waves of enemies with different objectives, and, at launch, will immediately unlock the four new Heroes from the new Wu Lin faction (the Tiandi, the Jiang Jun, the Nuxia and the Shaolin), with exclusive access for two weeks before they are available to be unlocked by all players using in-game Steel. Players who pre-order the Marching Fire expansion will receive the Wu Lin Elite Pack, which includes 1 Elite Outfit for all Wu Lin Heroes, worth 28,000 Steel.

All players will be able to recruit the new Wu Lin Heroes using in-game Steel after the initial early access period, as well as play the 4v4 castle siege mode, “Breach”, for free. Additionally, all players will benefit from free graphical enhancements that will improve the in-game textures, introduce a revamped lighting system and new sky gradients and also provide further quality of life improvements including an updated user interface and a new responsive dialog system. 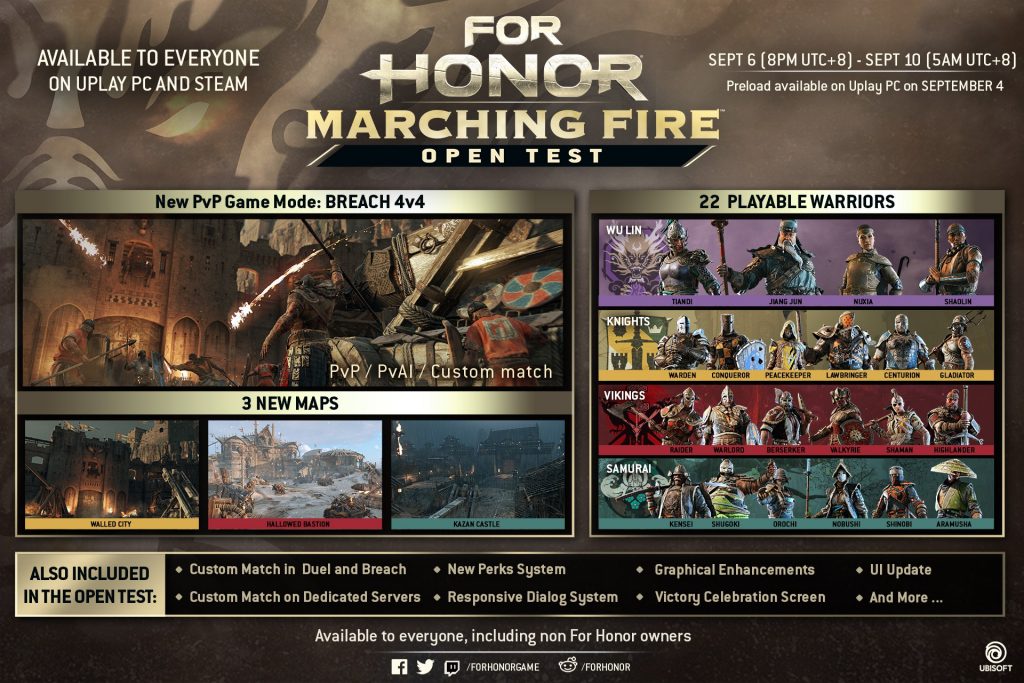 Newcomers who want to jump in now can download the For Honor Standard Edition as part of Xbox’s Games with Gold, available for free for Xbox Live Gold members until September 15.

Developed by Ubisoft Montreal in collaboration with other Ubisoft studios**, For Honor offers an engaging campaign and thrilling multiplayer modes. Players embody warriors of the three Great Factions – the bold Knights, the brutal Vikings and the deadly Samurai – fighting to the death on intense and believable melee battlefields. The Art of Battle, the game’s innovative combat system that puts players in total control of their warriors, allows them to utilize the unique skills and combat style of each hero to vanquish all enemies who stand in their way.