Celebrating Ubisoft Singapore’s 10-year anniversary, Ubisoft invited us down to take a look at their studio and see what goes on behind the scenes in a game studio. Being the biggest AAA studio in Southeast Asia, they have over 300 people working on various huge titles like the Assassin’s Creed franchise, with particular focus on the technology behind bringing life to water and naval battles.

Making full use of the studio’s specialty in water tech and battles on the ocean, it was only natural that Skull and Bones would happen. The game centres around these two main aspects, while having a unique history that glues the development of the game together with the team at Ubisoft Singapore. This is due to Singapore’s history, together with the neighbouring countries around it, having a connection to piracy. In particular, the Strait of Malacca had been a literal treasure trove for pirates. As such, this location has been selected to be in the game of Skull and Bones. Not to mention, several members of the team have some historical link to pirates too.

The tour around the studio had us seeing various stages of the game’s development. From concept arts to the creation of assets, such as the various ships and characters, the team had to work together to create a cohesive visual experience for players. Each ship will be able to customize their own sail, wheel, ram as well as their own figurehead. Furthermore, iconic elements (coves and even biomes) from the actual locations were used to replicate sailing past those islands.

To end it off, we had the chance to try out the game itself, with the “Hostile Takeover” fortunes seeing us sailing in a very tense and aggressive ocean. We were skeptical how a primarily ship-based multiplayer game would fare, but we really enjoyed ourselves during our time with it. We’ll definitely be trying out the public beta when it happens.

Skull and Bones will be coming out at 2019 and will be primarily a multiplayer game with dedicated servers.

When it comes to their latest title – Assassin’s Creed Odyssey, the team in Singapore is one of the 9 studios co-developing it. Because of how expansive the Assassin’s Creed titles have become, the studios have taken up separate responsibilities, with Ubisoft SG’s specialty in Water Tech and Naval Battles, their responsibility over the islands that make up a huge part of the entire world of AC Odyssey is well warranted.

The game also features over 30 hours of cinematic dialog, and also comes with one of the most exciting change in the AC lineup – Dialogue Options. Players have to make decisions that affect the world around them. These can range from an immediate effect like having a bounty placed on their heads, to one that changes the entire main narrative of the game. Ubisoft confirmed this by mentioning that there will be multiple game endings. Hopefully they will be able to pick up what the Mass Effect franchise failed to. 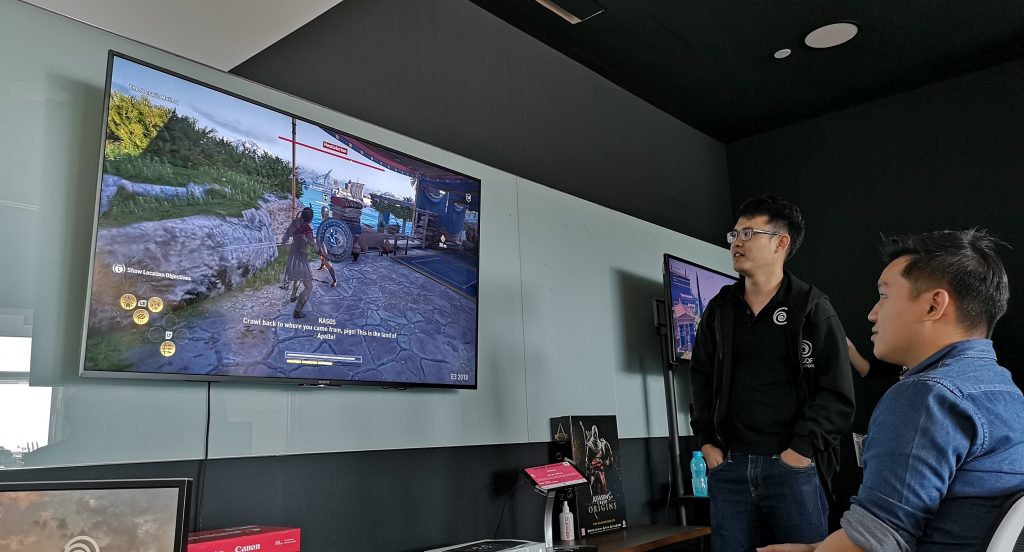 With Ubisoft Quebec taking the lead in AC Odyssey, they believe that the game is unique and different enough to warrant a release just a year after AC:Origins (coming 5th October 2018). Many would also recognize Ubisoft Quebec’s touch with AC Syndicate, as players will have a choice between either a male or female protagonist.