Even though the ASUS Blue Cave Router was first introduced at COMPUTEX 2017 last year, it only reached Singapore just two months back. With the increase in popularity of IoT devices at home, the ASUS Blue Cave is targeted to be part of the whole Smart Home setup, connecting all Smart Home devices. How does it set itself apart from all the different wireless routers out in the market? Let’s find out. The ASUS Blue Cave gets rid of the stigma of a typical Wireless Router design. Instead of having antennas pointing out from the device, the Blue Cave comes in a shape of a box with a hole in the middle. Just in case you are wondering, this design is purely aesthetic, and does not magically improve the signal strength of the Wi-Fi. However, to work around from the compromise of having internal antennas, the location and orientation of the antennas relative to each other was specifically chosen.

Aesthetically, the ASUS Blue Cave’s design is indeed very different from any other products in the same category. Being a router that is created for homes, it should also complement with any part of your home. Of course, ASUS did not trade off design with performance. Since the Blue Cave is a AC2600 rated router, it is expected to have an overall throughput of 2.6Gbps. This is achieved by the 802.11ac standard, with 1733Mbps (5GHz band) and 800Mbps (2.4GHz band with 256QAM). Moreover, it also supports Gigabit speeds on both WAN and LAN ports. There is also a single USB 3.1 port for 3G/4G sharing, AiCloud, Media server, File Server, SMB server, FTP server and print server.

More about the Intel GRX350 SoC

The ASUS Blue Cave Home router is based on Intel’s AnyWAN GRX350 SoC. To put it simply, the Blue Cave is actually a small little computer that is optimized for network operations. With this SoC, ASUS simply had to implement their design and put the whole system into a nice little external case.

The Intel AnyWAN GRX350 SoC provides PCI-e lanes that is connected to the WAV514 and WAV524 wireless chipset. This provides the wireless capabilities of the whole router. 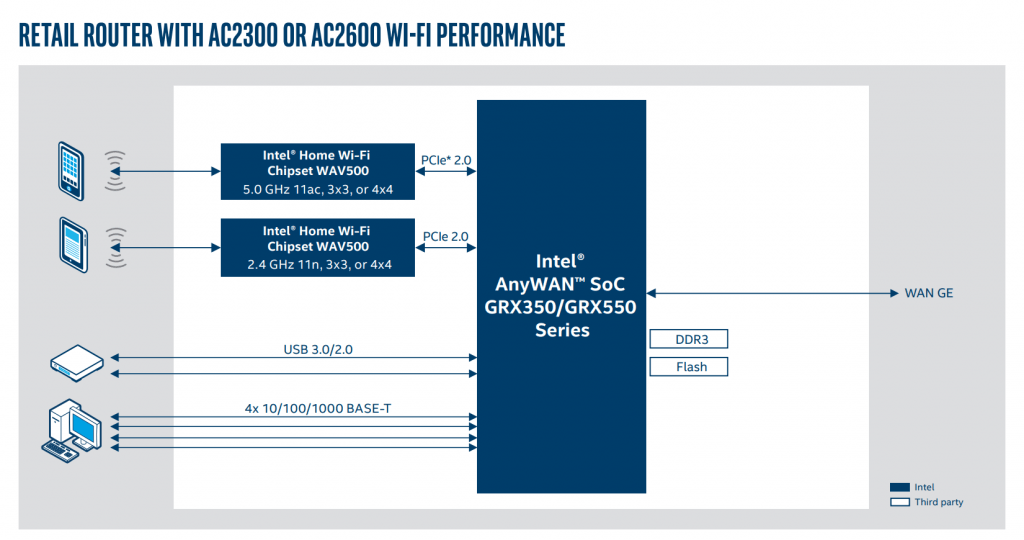 The Intel GRX350 SoC also tries to increase the overall performance of the router by having dedicated hardware for network processing. For example, it has included a cryptographic co-processor that accelerates encryption and decryption. This can offload complicated encryption and decryption operations from the network processor, thus allowing the router to focus on what’s important for it.

Moreover, this SoC also supports Protocol Process Acceleration (PPA) for Network Address Translation (NAT). NAT simply brings internet packets from a wider network to the local area network and vice versa. Usually, this will be done via a network address table, but with PPA, the table lookup will be accelerated by hardware, seemingly removing the need for time consuming table lookups and addressing.

Do take note that unlike the newer GRX750, which is based on Intel’s own Atom CPU on the x86/64 architecture, the GRX350 is still based on MIPS.

Setting Up the ASUS Blue Cave

As expected of ASUS routers, the setting up of Blue Cave was also extremely straightforward. The process has been simplified with the use of the ASUS Router Mobile Application, which provides step by step instructions and guides to ease you through the process of getting the whole wireless service up. 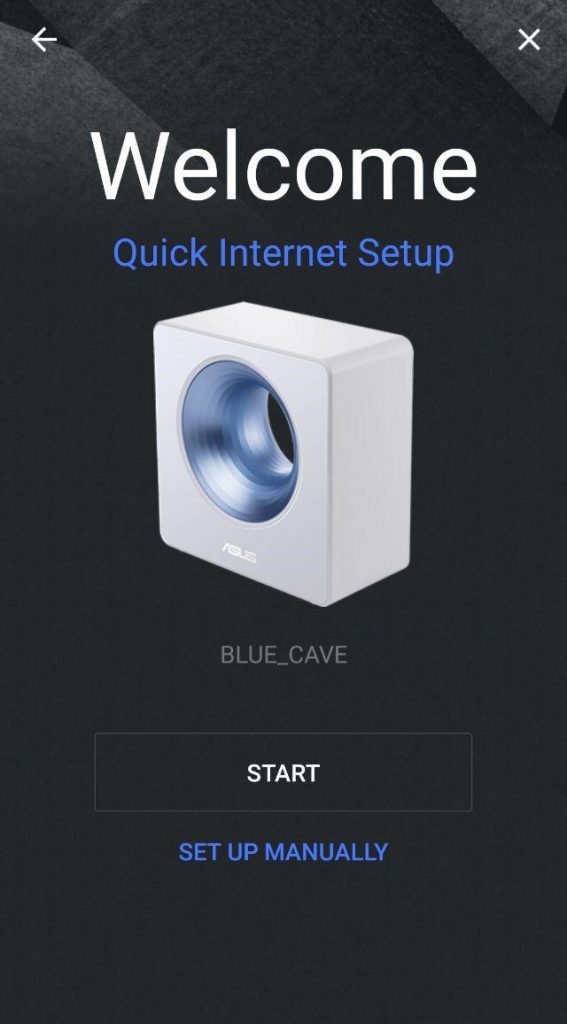 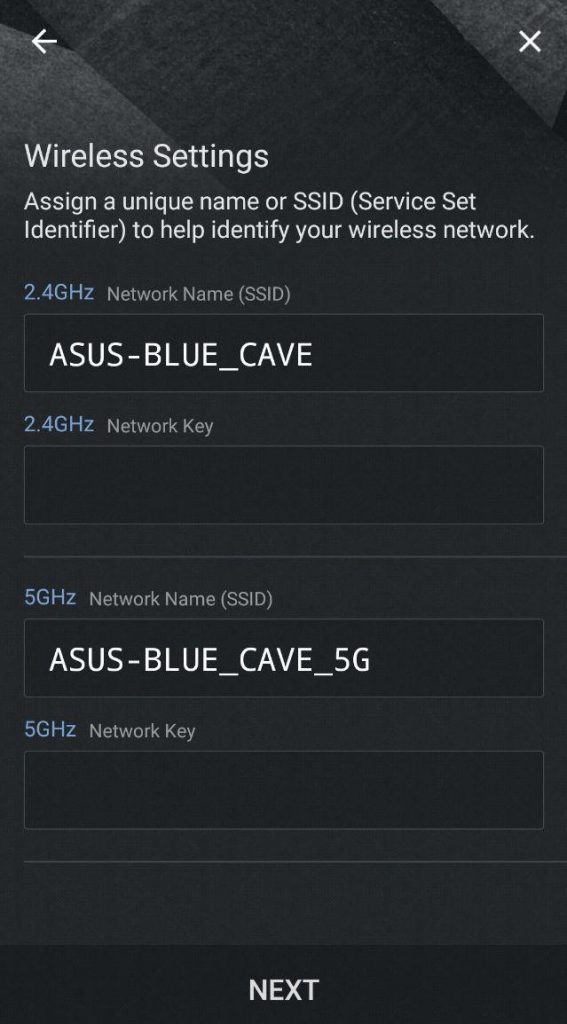 To setup the Blue Cave, you simply have to plug the cables in to the right ports and go through these 3 simple steps to get started. You then setup the password for both the wireless network as well as the administrator page.

Alternatively, instead of the mobile application, the setting up can also be done via the web browser as well over a wired/wireless connection as well.

The Blue Cave is a truly home oriented device. This is established through the different types of control, sharing and security features on the router. 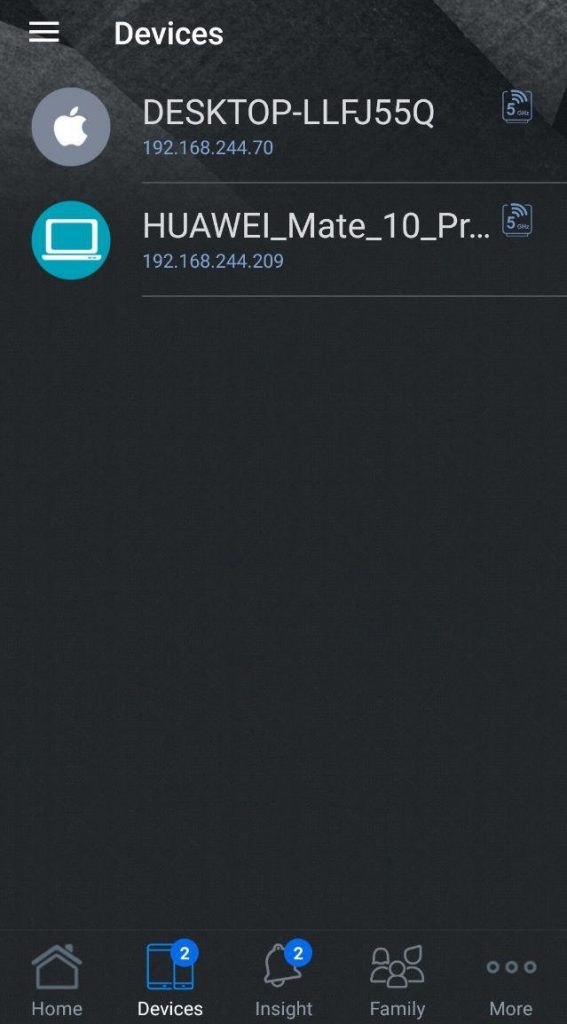 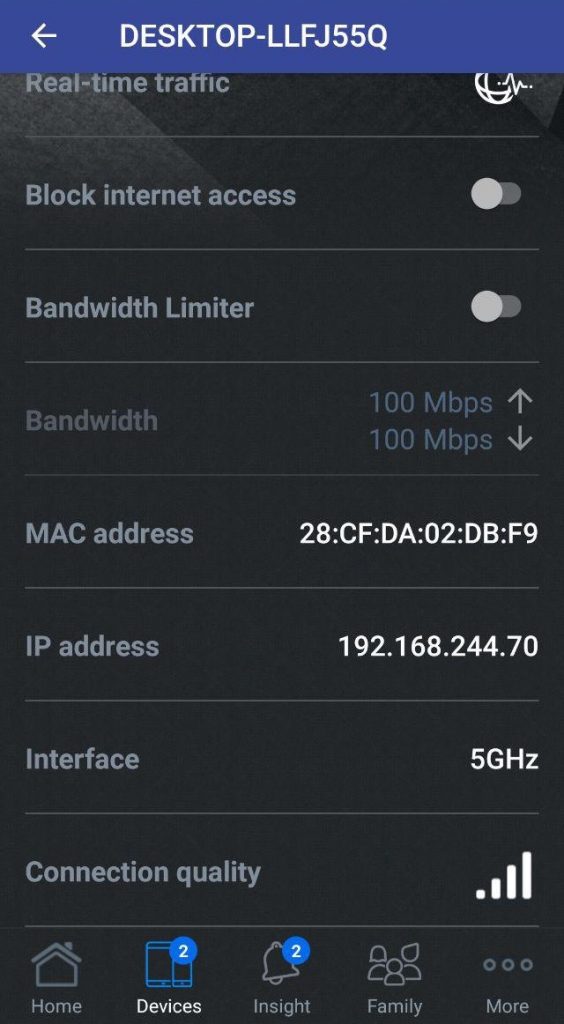 The administrator of the network will have almost full access to the control of the network. These settings are all presented in a very intuitive manner, allowing users without any technical knowledge to easily change the settings. Based on the screenshots above, we can see that the administrator will have direct access to the status and settings of individual devices that are connected to the network. The administrator can then look at the real-time traffic of the device, and implement access policies to the specific device. They can also limit the bandwidth or block certain applications to be accessed by the device. 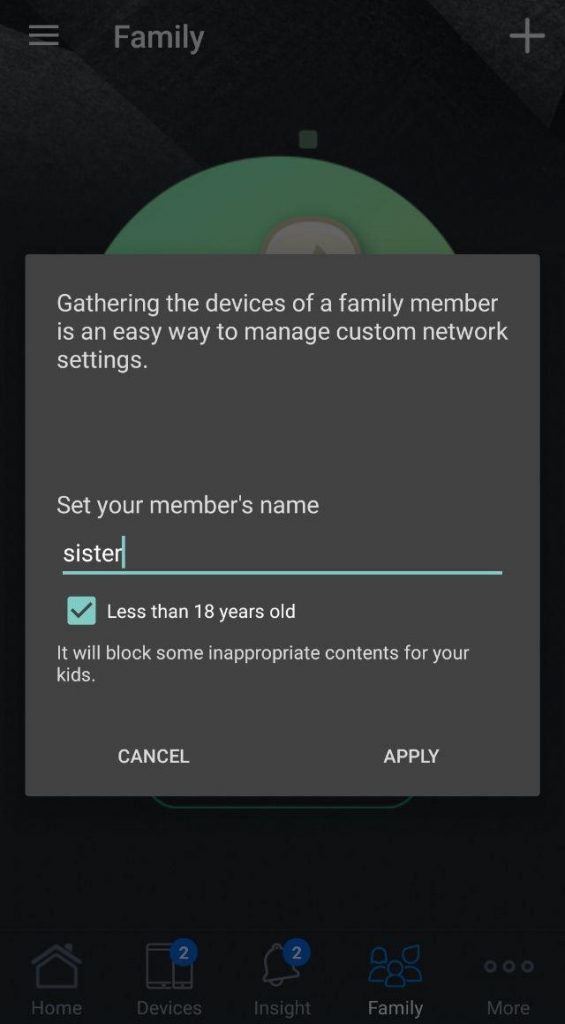 The advanced Parental Control features truly makes the Blue Cave a wireless router for the family. With the “Family” feature on the ASUS Router mobile app, parents can easily create user profiles to implement user policies on specific devices. For example, if there are kids at home, inappropriate content and web pages can be directly blocked. 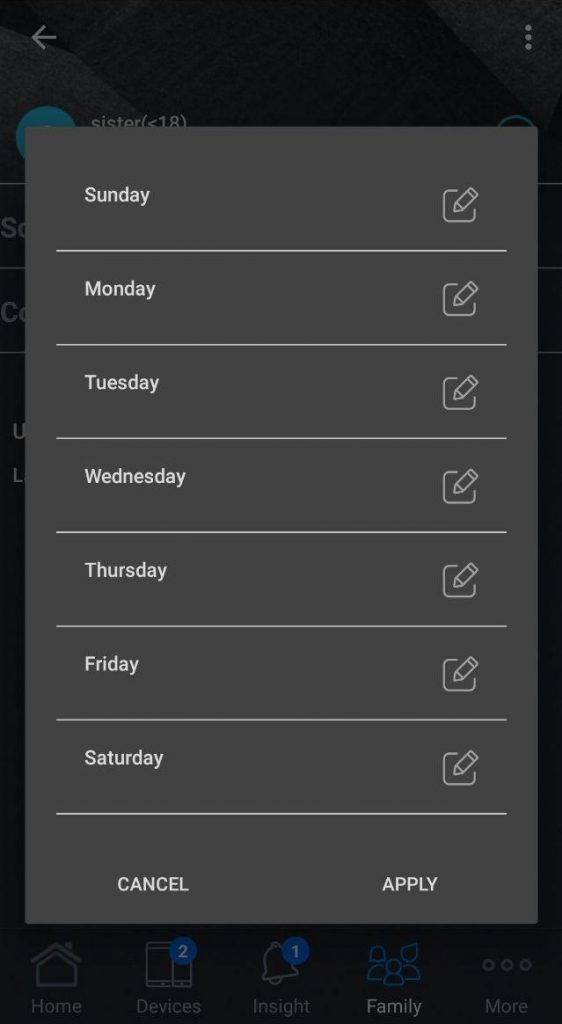 Not only that, the ASUS Blue Cave’s Parental Control section can also limit the access of certain devices based on the time/day of the week, as well as the type of applications that is used to the device. It simply makes the internet a much safer place for the younger kids to be in!

Sharing your Resources on the Home Network 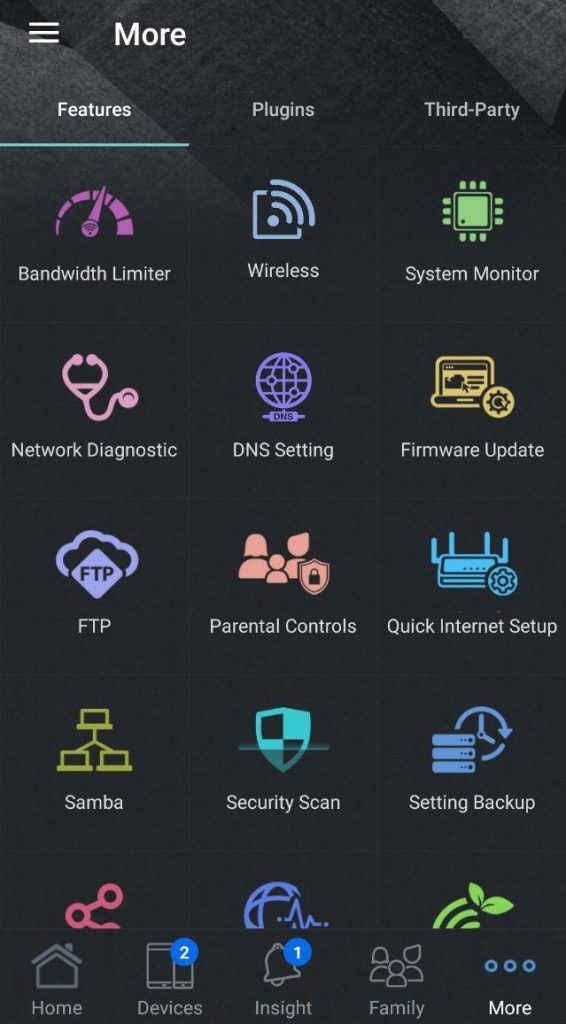 Just like any other ASUS Router, the ASUS Blue Cave’s ASUSWRT operating system brings about many different kinds of applications. Since this router also comes with a single USB 3.1 (Gen 1) port, it has the capability to also act as a file server, print server or backup server. It can even support 3G/4G sharing by connecting to an external USB modem. Furthermore, additional features can also be added by integrating plugins and other applications as well.

These features ensure a comprehensive security suite to the entire network, where the unwanted stay out of the network. Even if a machine is infected within the network, it will be blocked, mitigating the risk of having all other devices to be infected. 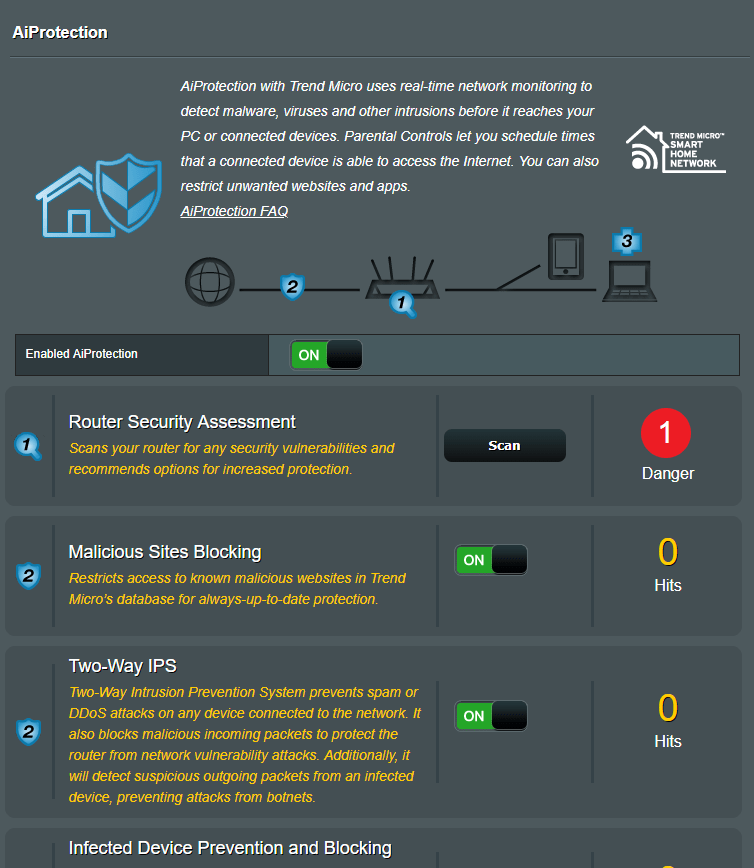 On main AiProtection page, ASUS has even included a simple Router Security Assessment. For the layman, you simply have to follow the assessment’s recommendations, and you will be good to go.

The ASUS Blue Cave is also probably the first wireless router in the market which supports Smart Home integration. This is enabled by allowing the Blue Cave to understand events that happen and react accordingly, or even listen to commands sent from the internet. To enable these smart features, the Blue Cave’s firmware comes with built in IFTTT (If This Then That) software that allows it to understand and execute commands to other connected devices.

With such features, here are the events (triggers) that the ASUS Blue Cave understands (The “This” portion of IFTTT)

The ASUS Blue Cave can execute these actions

Of course, because of the flexibility of IFTTT, many other supported features can also be enabled with the ASUS Blue Cave router. Here are some available applets (IFTTT scripts) that are already “pre-cooked” online from the ASUS Router Applet page. 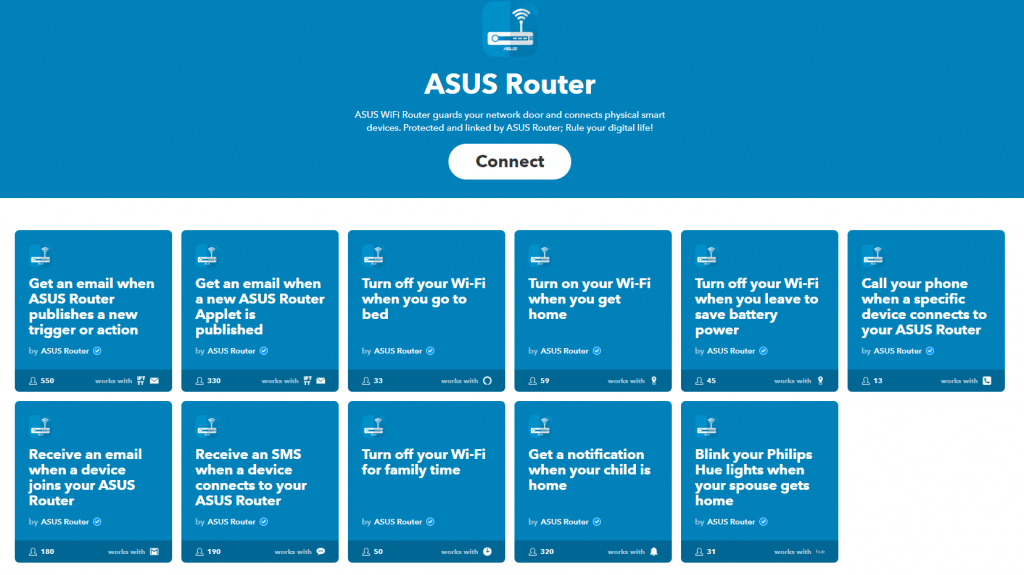 This list is not exhaustive. We can think of other interesting applications such as

With IFTTT, the possibilities are limitless. The service allows you to connect to any other kinds of compatible actions such as lighting, electrical appliances, online services or even customized applications! 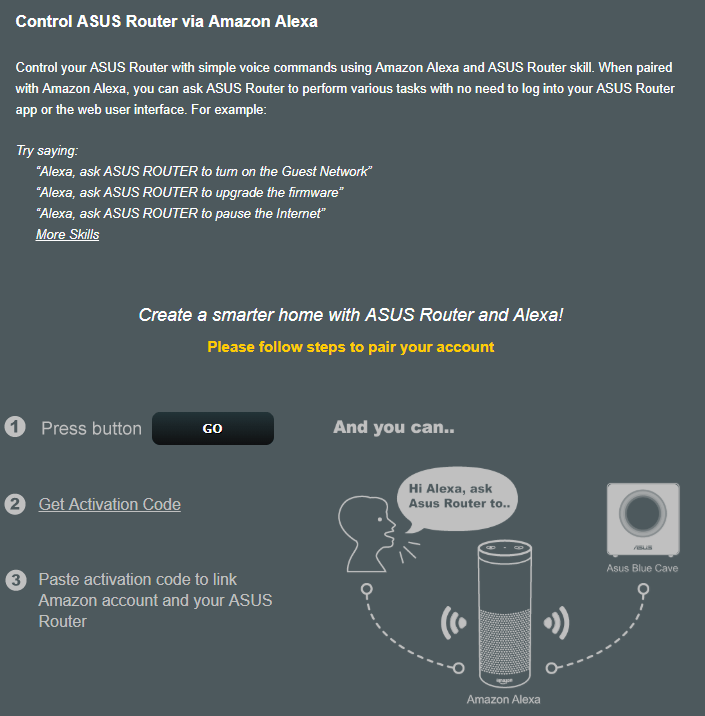 It is also because that there are available functions that can be controlled directly over the network, the ASUS Blue Cave also supports voice commands from Amazon Alexa! Users will be able to issue voice commands to modify the settings on the ASUS Blue Cave router. It should be noted that these settings are currently limited to the IFTTT actions that are stated above.

Even though the Blue Cave only openly supports Amazon Alexa, you can actually work around this to make it compatible with your Google Home or any other third-party triggers via IFTTT! Here’s Google Home in action, controlling the Blue Cave to turn on and off its Guest Wi-Fi Network! 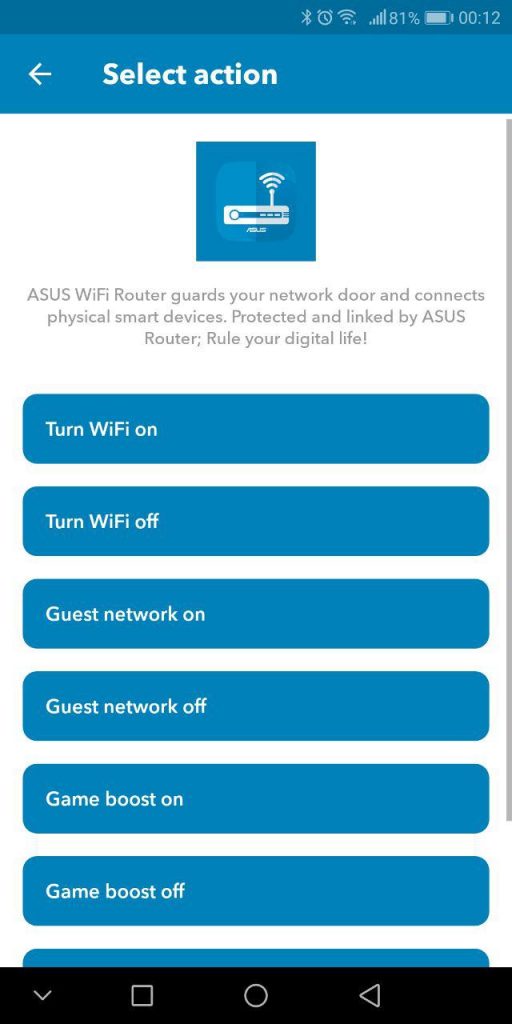 The Blue Cave is directly compared to a ASUS RT-AC87U (with the Hangncq SSID), which was placed almost next to it. Apparently, the signal from the 2.4GHz band on the RT-AC87U was shown to be stronger than on the Blue Cave. However, when the laptop was placed further away, both signal strengths remained about the same. 5GHz signal strength was also considerably consistent between both wireless routers. This definitely shows that despite having its antennas placed within the enclosure, the ASUS Blue Cave can still sustain a good wireless signal strength on both its 2.4GHz and 5GHz channels.

The performance benchmarks of the Blue Cave are directly taken from PCADV.TW. Due to the lack of proper wireless card to test the router, we had to rely on benchmarks from third parties for our comments. These tests are completed on iPerf v3 with “-t 30 -i 5 -w 2048KB” options. (30s test, 5s interval, 2MB window size)

Based on the results, we can see that the ASUS Blue Cave is definitely capable of running true Gigabit connections properly. Its LAN to WAN and WAN to LAN routing speeds are drastically improved when PPA is activated, showing the importance of hardware accelerated NAT. The wireless performance of the ASUS Blue Cave is also rather decent, reaching up to 526Mbps throughput on download and 478Mbps on upload.

The ASUS Blue Cave is simply different from any other wireless router out in the market. This product has clearly defined its own personality with a never seen before design and innovative IFTTT/Smart Control capabilities. Its advanced Parental Control and security features makes is a good choice for any parents with teenagers or young kids at home. If you are someone who doesn’t like to stick to the usual, the ASUS Blue Cave will be the right choice.

With it daring design and never seen before IoT features, we have to give our approval and award the ASUS Blue Cave with our Innovation Award. The ASUS Blue Cave wireless router retails at $339 and is available at all major online and physical IT stores in Singapore.

Unique design that sets itself apart

Signal Strength is not affected by internal antenna design

Design could be too bold