Sandbox VR Brings You The Best Immersive VR Experience on the
Planet
Escape Together, to our world 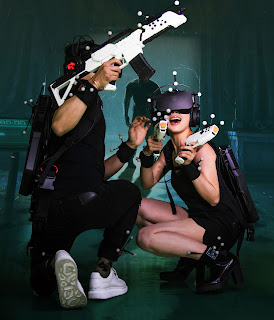 SINGAPORE. – 30 March, 2018 – Today, Sandbox VR announced their official
launch in Singapore. It is the world’s first VR Escape Room Experience, where
guests will work together in a team to complete an objective and escape the
room in Virtual Reality (VR).
Sandbox VR combines the latest VR hardware
technology, movie quality real-time motion capture rigs and AAA-quality content
to create the best VR gaming experience on the planet.
In June 2017, Sandbox VR, previously known as
GloStation, opened their first store in Hong Kong. Since then, the outlet has
been booked out weeks in advance and has attracted the likes of Alibaba, which
has invested $3 million into the company.
IMAX has also licensed Sandbox VR’s proprietary
experience to its flagship VR Center in Los Angeles and New York.
“With the investment from Alibaba and the
tremendous reception we have received at our locations around the world,” said
Martin Li, Director, Sandbox VR Singapore, “We believe that virtual reality
will soon become the ultimate medium for mainstream entertainment.”
Currently, Sandbox VR has five stores around the
world, and this is their first store in Singapore.
Games
Currently, Sandbox VR offers two proprietary
games, “Deadwood Mansion” and “Curse of Davy
Jones”.
“Deadwood Mansion” is the first hyperreality
escape room experience which requires players to hunt for a deranged doctor
accused of conducting illegal experiments in the mansion.
The “Curse of Davy Jones”, their latest VR
experience was released on 20 March. The game brings about players to find the
lost treasure of Davy Jones in time, or risk the menacing Davy Jones striking
again to claim their souls. Not only are there brand new weapons, graphics and
game play, but it also introduces Sandbox VR’s new haptic force feedback
technology.
Gaming Gear
To fully immerse themselves in the experience,
players are required to suit up in the gear provided. Players are fitted with a
VR head-mounted display, a headset, a backpack PC, a haptic tactsuit and motion
capture devices on their wrists and ankles. These devices will ensure that the
players will be able to communicate with the game master, as well as their
teammates. The haptic tactsuit is embedded with more than 40 vibration sensors,
allowing players to feel every hit, exactly where they were hit, during the
game.
Game Play
There are three parts to the whole Sandbox VR
experience. Players will undergo a brief introduction on the gameplay and then
proceed to suiting up. Thereafter, they will spend the next 30 to 35 minutes in
the virtual realm of their selected game. Once they have completed the game,
players will be able to their video highlights on the Sandbox VR Facebook
page.
Location, Pricing & Bookings
Sandbox VR is located at Orchard Central,
#05-31, 181 Orchard Road. To book your experience, simply visit www.sandboxvr.com/sg to select your preferred time slot and game.
About Sandbox VR
Sandbox VR is the world’s leading VR gaming
experience company, producing proprietary games such as Deadwood Mansion and Curse of Davy
Jones. For additional
information, please visit www.sandboxvr.com/sg.