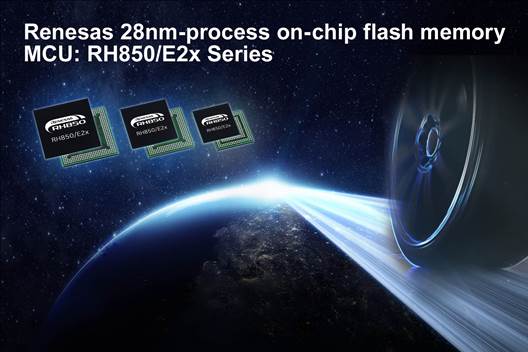 High processing performance to
enable complex automotive control for green cars
To develop
environmentally-friendly vehicles, next-generation fuel-efficient engines
require high processing performance to allow the implementation of new fuel
combustion systems. In addition, both high processing performance and high
integration densities are required to achieve miniaturization and higher
efficiency in the motors and inverters used in electric vehicles (EV) and
plug-in hybrid electric vehicles (PHEV). The newly-developed 28nm-process flash
memory MCU is the world’s first to achieve up to six 400 MHz CPU cores and 9600
MIPS processing capabilities. Compared to the earlier 40nm MCUs, the new
RH850/E2x Series of MCUs also achieves approximately three times the
performance at the same power level. The RH850/E2x realizes increased automotive
control system integration by including enhanced sensor interfaces necessary
for precise automotive control functions. Multi-core virtual environments and
model-based development environments for the new MCUs will be available from
Renesas partner companies.
Advanced OTA updates with large
flash memory capacities for connected cars
Demand for built-in
large capacity flash memory is rising to support over-the-air (OTA)
functionality which automatically and wirelessly updates the ECU software to
control programs with improved safety. The RH850/E2x Series is equipped with up
to 16 MB of flash ROM and, to suit the user’s needs and preferences, it is
possible to only update certain arbitrary areas during program operation. The RH850/E2x Series also comes
with improved serial interfaces, including up to ten channels of CAN FD and one
Ethernet channel. Security functions that support Evita Medium enable the MCUs
to support safe and rapid OTA updating of the software.
Enhanced functional safety for
autonomous-driving vehicles
Targeting ASIL-D, the
highest level of the ISO 26262 functional safety standard for automotive E/E
systems, the RH850/E2x Series adopts the dual core lock step CPU structure that
guarantees that the calculations performed by two CPU cores are identical. The
RH850/E2x also provides up to four sets of CPU pairs, and features a variety of
hardware functional safety improvements. In applications where a system
malfunction could lead to life-endangering accidents, these features
immediately detect faults should a malfunction occur and allow system safety to
be maintained. Renesas will provide safety analysis tools that can flexibly
support a wide range of use cases to implement safe systems.
Following the
development of the 28nm embedded flash memory in February 2015, Renesas
announced its collaboration with TSMC on 28nm MCUs in September 2016. The
company today hit a major milestone by reaching sample shipment of the world’s
first 28nm embedded flash memory MCU on the market. Renesas has already
succeeded in verifying large-scale operation of fin-structure MONOS flash memorytargeting 16/14nm and beyond
generations of MCUs. As the leading supplier of automotive semiconductor
solutions, Renesas is committed to advancing the industry through continued
technological innovation to achieve a safe and secure automotive society.
To assure scalability in
the RH850/E2x Series, in addition to the 28nm flash memory MCU, Renesas has
also launched a 40nm process MCU featuring (1) and (3) described above. Samples
of this MCU are available now. Samples of both 28nm and 40nm MCUs from
RH850/E2x are scheduled to be available from March 2018.
Refer to the separate sheet (PDF: 74 KB) for product specifications of
the RH850/E2x Series.
·
(Note 1) As of today compared to published
data from other companies, according to Renesas research.
·
(Note 2) MIPS (Million
Instructions Per Second): An expression of the processing power of a computer.

MONOS is a structure in
which each transistor in the flash cell consists of three layers—oxide,
nitride, and oxide—on a silicon base, with a metal control gate at the top.
Renesas has accumulated more than two decades of experience in the use of MONOS
flash memory technology by providing MCUs for IC cards. Based on the track
record in MONOS technology, Renesas successfully extended the technology by
developing a split-gate (SG) structure suitable for MCU internal flash memory.
The new “SG-MONOS” –type flash memory realizes MCUs with high reliability, high
speed and low power consumption.