With an initial release date of November 2016, Final Fantasy XV (FFXV) itself is definitely old news. What isn’t is the launch of the game on the Windows platform in the early 2018. This is not a surprise as more publishers and studios following the trend of only timed exclusives titles. The PC gaming landscape is definitely looking better than ever!
The FFXV Windows Edition does come with additional goodies to entice newer customers, in addition to its already released paid DLCs. One example would be that buyers on Steam are able to get the Half-Life pack which contains Valve’s signature Half-Life costumes and Gordon Freeman’s favorite crowbar. Together with the new features, we will also look at how well the PC port is as well as what are the benefits you will be gaining over the console versions.

FFXV surely is a gorgeous looking game. With luscious looking landscapes, and detailed models of characters and monsters, FFXV is one of the most impressive PC port in 2018. Great graphics does still come at a great cost. The game requires a mid-range PC to run on the “low” preset, or a beefy one to take advantage of NVIDIA’s GameWorks effects and High-Resolution texture pack. With an overclocked GTX 970, the GPU struggles to maintain 60 FPS at the “Average” preset (with the i7-3820 not even being taxed fully).

One caveat of PC games in general is the usage of DRMs, particularly Denuvo that is used in this game. There has been mixed reports stating the performance impact that Denuvo has on the game, and prospective buyers should at least take note of that.

When it comes to travelling the world of Eos, coasting along the highway with your trusty ride Regalia is calming and serene. Car rides give players a chance to appreciate the majestic surroundings as well as provide the much-needed lows to the high moments in the story. And yes, you can still fast travel to spots that you have been to. One downside would be that the Regalia will not be able to traverse off-road, and a rentable Chocobo would be required to do so.

The game also presents some choices in the story, but most of which do not affect the storyline adversely. However, the questions that make the game feel alive is by your band of bros. At times, they would recommend parking at the nearby camp site or caravan if its getting late, or even suggest nearby scenic spots to take photos at. This adds more meaningful and useful interactions between the player and the other characters. 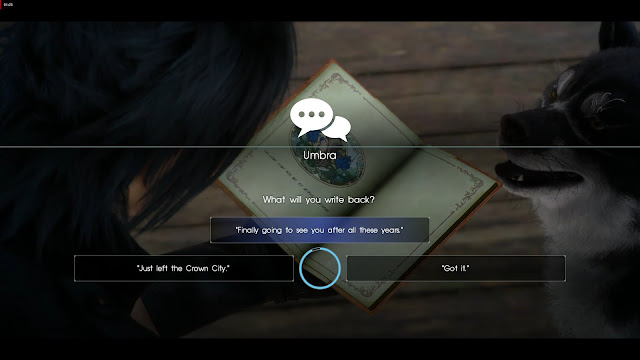 When it comes to combat, the style follows the Batman and Assassin’s Creed gaming series where timing and positioning is key. Enemies are automatically locked on to, based on who you are facing, and the player can dodge or block incoming attacks. Furthermore, you are now not acting alone and are given the ability to control your team’s abilities that can be used in unison with yours. Getting the key presses at just the right timing is of key importance in the game, and as such, the Windows Edition does have an advantage of the console version with better and higher framerate.However, this style is an abrupt departure from their typical turn-based strategy titles in the past and has unsurprisingly gotten some flak from older fans. Still, it is a welcome change to newer fans of the Final Fantasy titles that prefer something more action-packed.
Here are some clips showing the gist of the combat system of FFXV.

Like a cat and good food, FFXV is addictively fun. With the only complaint of the game being its odd controls in the menu, FFXV is definitely one great PC port. Better graphics and only minor performance optimization issues makes the Windows Edition a superior game in general. However, it does require a somewhat beefy system to run at 60 FPS and PCs with poorer specifications would have a hard time keeping up. With future DLCs planned for the title, and a few patches already added to the game, FFXV is looking to be a great pick up in 2018.
For the LATEST tech updates,
FOLLOW us on our Twitter
LIKE us on our FaceBook
SUBSCRIBE to us on our YouTube Channel!