Can VR Gaming Still Improve Much? - The Tech Revolutionist

Looking at the virtual reality scene, and really mixed reality as a whole, it’s common to assume things are going to get better. They’re fine now, and plenty of people are excited about VR, particularly where gaming is concerned. But it’s not as if mixed reality has completely taken over gaming or entertainment by any stretch of the imagination. And if this industry is truly going to be a $37 billion reality in a matter of years, it still needs to improve.
So how, beyond basic fine-tuning of graphics and gameplay-related technology, is mixed reality gaming still supposed to get better? It’ll be a challenge, and one addressed by innumerable developers and creative types over time, and for that reason it’s tricky to predict. But there are a few clear boosts for mixed reality gaming on the horizon.
Standalone Gaming Headsets 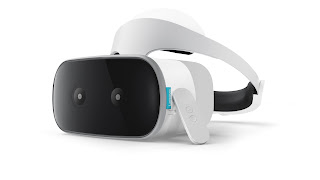 This is a change that’s come about somewhat suddenly early this year, and which could certainly lead to the perception of industry-wide improvement. Back in January, Google and Lenovo together unveiled the first high quality standalone headset for virtual reality, and it already seems as if they might be sparking a trend. As for the notion of improvement, it goes without saying that high-end VR is expensive, and that’s largely because pricey headsets require pricey PCs and game systems to operate. If this can change even a little bit, with standalone VR devices taking over as more affordable and less cumbersome options, consumers will love the adjustment.
VR Casinos
VR casinos have yet to arrive en masse, and they’re a bigger deal conceptually than you might guess. The first thing that comes to mind is probably a poker tournament in VR, and this indeed is what early experiences have looked like. But other casino games can benefit similarly from the format. Blackjack and roulette can work similarly to poker. Slots have already been adapted to include 3D animations online and could be made far more engaging and interactive in VR. And most exciting of all, these concepts can all be put together in a literal virtual casino (rather than a collection of VR casino games). That is to say within a VR environment you could move from one table or game machine to the next. Done properly, games like these would bring a lot of new people into the VR gaming fold, and thus improve the industry.
Regardless the possibilities, VR Casinos could also bring about stricter law enforcement in Remote Gambling due to its increased ease of access. For example, the Remote Gambling Act was enacted in 2015 in Singapore. This act forbids Singaporeans to engage in any form of remote gambling and betting, which includes activities over the internet, over the phone, via TV or radio, or any other kind of communication technology. VR Casinos will definitely be banned in countries like Singapore.
VR Arcades
There are actually two possible interpretations of the idea of VR arcades. One is much like the casino idea expressed above: a VR environment mimicking an old school arcade, in which players could move from one game to another, and possibly even mingle with each other. However, the more significant interpretation is that there will actually be live, physical arcades where people can go to try different VR experiences. These are already popping up here and there in the world, and are sometimes referred to as VRcades. In some cases, they offer more sophisticated games than you can play at home because they include games connected to large apparatuses to assist with locomotion and things of the like.
Apple’s Next Move
Perhaps the biggest improvement left to be seen in mixed reality is actually in the AR area, and will come courtesy of Apple (who else?). The tech giant has been developing augmented reality glasses for some time now, and doing so not-so-secretly. The glasses were actually detailed in a recent patent application, which seems to indicate they’re getting closer to being officially unveiled. While it’s unclear what exactly they’ll do, they will make AR, and possibly forms of VR more accessible. It should make for a significant boost to mixed reality as a whole.
For the LATEST tech updates,
FOLLOW us on our Twitter
LIKE us on our FaceBook
SUBSCRIBE to us on our YouTube Channel!

5 Myths About the AI Hype Train