oBike Continues Rapid Growth in Asia, to Launch in Indonesia

oBike Continues Rapid Growth in Asia, to Launch
in Indonesia 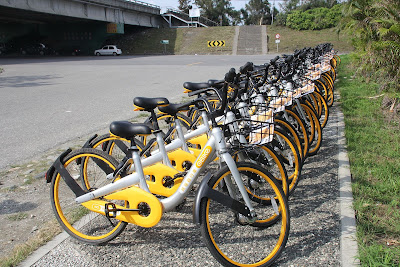 SINGAPORE, 31
January 2018 – oBike, Southeast Asia’s largest dockless bike-sharing company,
today announced its launch in Indonesia, after an incredibly successful entry
into 20 other markets, including Austria, Australia, Germany, Hong Kong,
Malaysia, Spain, South Korea, Taiwan, United Kingdom and more, in under a year.
oBike is the first dockless bicycle sharing platform in Indonesia.
“By having
this bicycle-sharing solution, oBike provides Balinese and residents in Bandung
an alternative mode to commute from home to work, school, and public transport
station. Apart from a daily commute solution, residents and tourists can enjoy
oBike for just a fun bike ride. And in the next few years, we’ll be seeing a
significant transition where people will choose cycling a bicycle to start or
complete their daily commuting activity”, said William T, Country Manager
of oBike Indonesia.
“We developed
oBike to provide a sustainable and convenient short-distance commuting solution
that will save people time and money, while in the same time, embracing
healthier lifestyle and supporting government’s policy to reduce carbon emission.”
oBike is now
available in Bandung and in areas of Bali including Kuta, Legian and Seminyak.
It will soon be available in other major cities in Indonesia for commuting convenience.
During this first launch, oBike partners with Bandung city government
(Transport Dept / Dinas Perhubungan),
IHGMA (Hotels Association in Bandung) and Ecotransport.
To join the
oBike network, interested users simply need to download the oBike mobile app
from either Apple or Google Play Store, and register an account with a phone
number or email. Once registered, users are then able to use the bikes by
simply scanning each bikes’ unique QR code with the oBike app on their mobile
phones. Once the journey is over, users can lock the bike at appropriate
locations to end their ride.
Charges for the
use of each oBike is priced at IDR4,000 for every 30-minute ride. In
conjunction with the launch, every new user will enjoy 3 free rides with oBike.
oBike has deployed
14,000 bikes in Singapore and has close to five million users in Southeast
Asia. For more information, visit: https://o.bike/ or www.facebook.com/oBikeIndonesia