The Yoga™ 920 2-in-1 Convertible Laptop: Nearly 50
Years in the Making
Late next year will
mark the 50th anniversary of an event many consider the birth of the
personal computer. In December 1968, inventor Douglas Engelbart took the stage
at San Francisco’s now-defunct Brooks Hall and delivered what would come to be
known as ‘The Mother of All Demos.’ For more than 90 minutes, he dazzled his
audience with a live demonstration of a computer mouse, WYSIWYG text and
graphics editor, collaborative networking, hyperlinking and videoconferencing.1
All of these had never been seen before.
Years later, Engelbart
would explain that he and his fellow engineers were focused not on improving
the automation of computational processes but, instead, their augmentation.2 To be truly
useful, Engelbart believed computers should empower their owners to use
information in ways that were more natural and intuitive. This would give rise
to still newer forms of thinking and technological innovation.
We’d like to think
those early pioneers would be thrilled to see what that early commitment to
improved human-machine interaction looks like in the form of the new Lenovo™ Yoga™
920 2-in-1 convertible. From a digital smart pen capable of capturing our
creative potential with pen-on-paper sensitivity and realism, to a
voice-controlled digital assistant using artificial intelligence (AI) to learn
from our habits; from biometric-level security that recognizes you from
billions of other human beings, to mixed reality virtualization and
augmentation of our immediate environment and surroundings… the new Yoga 920 illustrates
the increasingly natural interface between humans and our machines. 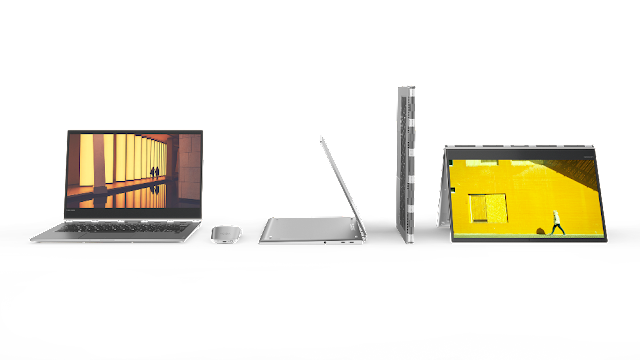 Multimode
Yoga 920 2-in-1 convertible improved for a more natural and intuitive
experience
Voice:
the most vital of human interactions
The global market
for voice recognition is expected to be valued at $6.19 billion this year,
likely to grow three times that by 2023.3 In fact, more than 60
million people, or fully one-fifth of the US population, is expected to use a voice-enabled
intelligent assistant, like Cortana®, at least once a month this year.4
People will be interacting more with voice-enabled intelligent assistants, and Cortana
enables Yoga 920 users to discover new ways of interacting with it.
The Yoga 920 is
equipped with far-field technology that enables Cortana, a voice-activated intelligent
assistant, to recognize voice commands from up to four meters away.5
This helps you get things done more easily and quickly with your voice, whether
at home or at work. So whether you’re busy making dinner or getting ready for
work, you can use Cortana to easily add items to a shopping list, play music,
check the traffic, send a short email, track packages and much more. 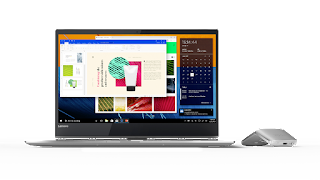 Add
items to a shopping list or send a short email with Cortana on the new Yoga 9202
Equally important,
with your permission, Cortana can automatically recognize when you make a
commitment in your email messages and will proactively suggest a reminder to
you to follow through. For example, if you have promised to send a report to
the boss, Cortana will bring this up and offer to set a reminder to do just
that.
The pen is still mightier
Despite the
growing popularity with voice response, many of the tasks people perform at the
office or in school – particularly when it comes to creativity and production –
still require a keyboard or pen. In the case of the Yoga 920, an optional
Lenovo Active Pen 2 with 4,096 levels of pen sensitivity dramatically expands
the creative and cross-application potential of the PC. 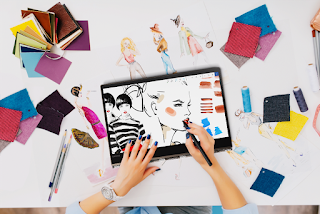 Windows
Ink™ lets you write, draw or sketch on the Yoga 920 with optional Lenovo Active
Pen 2
Offering pen-on-paper precision designed to give you no discernible lag,
the Lenovo Active Pen 2 with Windows Ink lets you sketch and paint original schematics
or annotate existing graphics and documents on the fly. Working on a
presentation? Use the pen’s shortcut button to open and check email for any
last-minute contributions from the team, sketch them into the presentation, add
some color and annotations, then send – all without setting down the pen. 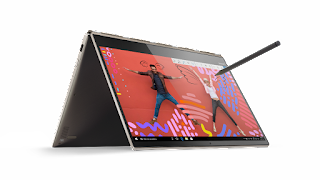 Yoga
920 with optional Lenovo Active Pen 2
Recent research shows that students are better able to learn and express
themselves with smart pens than through keyboard-generated content alone. Furthermore,
students using digital pens “made more diagrams, constructed them correctly,
and made more accurate inferences about the content displayed” than did those
using a traditional pen or pencil.6 The bottom line: digital smart
pens are good for computer users and serve as a great complement to the
keyboard and mouse.
Power, packaging and presentation
In addition to more intuitive input like pen and voice, the
Yoga 920 is powered by up to an 8th Generation Intel® Core™ i7 processor
– Intel’s newest, powerful processor designed for what’s coming next. And it
has Windows® 10 OS and twin Thunderbolt™ 3 technology ports – each of which
support the world’s fastest data transfers and the most video bandwidth
available on a single cable, while supplying power.7 Taking
advantage of the hardware enabled security built into the 8th Gen
Intel Core i7 processor, the Yoga 920 has the convenience of an integrated
fingerprint reader and Windows Hello™ for secure, instant biometric
authentication.
Yoga’s signature watchband hinge offers incredible user
flexibility, including typing in laptop mode, presenting in stand mode,
browsing in tablet mode, or watching videos in tent mode. 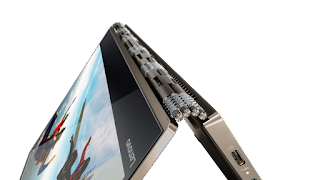 Iconic 360-degree watchband hinge on
the Yoga 920
When it comes to videos, the Yoga 920 arrives with a nearly
bezel-less 4K IPS touchscreen offering dazzling visuals that bely its 13.9-inch
size. Coupled with Dolby Atmos’ powerfully moving audio that flows above and
around you when listening through headphones,8 the Yoga 920 offers
immersive entertainment the way it was meant to be enjoyed. Those looking for
even more immersive experiences on their Yoga 920 can plug in an optional
Lenovo Explorer immersive headset for Windows Mixed Reality to try vivid
virtual travel and gaming too.9 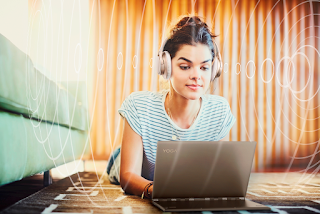 Star
Wars Special Edition Yoga 92010
From
past to present
In 1968, computers
were massive, costly and largely irrelevant to a majority of the human
population. Fast forward nearly 50 years later, another technology visionary,
Lenovo Chairman and CEO Yuangqing Yang
said, “Today we are standing at the beginning of the fourth revolution [that]
will transform how we work and live – in ways that no one could imagine in the
18th century – or even 18 months ago… It is Intelligent
Transformation – a transformation that is driven by big data, cloud and AI.”
By incorporating
voice recognition with AI capabilities, smart pen functionality, mixed reality
options, biometric security, and other tools that empower users to make the
most of their innate individual and collective potential, we believe PCs like the
new Yoga 920 embody what the computer pioneers set out to create so many years
ago.
1 “The click heard around the world,” Wired,
January 2004: https://www.wired.com/2004/01/mouse/
2 “40 years of icons: the evolution of the modern
computer interface,” The Verge, March 2013: https://www.theverge.com/2013/3/21/4127110/40-years-of-icons-the-evolution-of-the-modern-computer-interface
3 “Speech and Voice Recognition Market Global
Forecast to 2023,” Markets and Markets, 2016: http://www.marketsandmarkets.com/PressReleases/speech-voice-recognition.asp
4 “Alexa, say what?! Voice-enabled speaker usage
to grow nearly 130% this year,” eMarketer, May 2017: https://www.emarketer.com/Article/Alexa-Say-What-Voice-Enabled-Speaker-Usage-Grow-Nearly-130-This-Year/1015812
5 Cortana with far-field voice-recognition
technology supports up to 4 meters away and in standby mode, requires Windows
10 Fall Creators Update when available.
6 “Pen?
Keyboard? Voice? Touch? Computer interfaces and their impact on learning”
Sharon Oviatt: https://msp2l1160225102310.blob.core.windows.net/ms-p2-l1-160225-1023-13-assets/Microsoft_Computer_interfaces_and_their_impact_on_learning_widescreen_en-US.pdf
7  Thunderbolt
FAQs: https://thunderbolttechnology.net/tech/faq
8 Dolby Atmos on Yoga 920 requires Windows 10 Fall
Creators Update when available.
9  Mixed reality requires Windows 10 Fall Creators
Update when available. Also requires purchase of a Lenovo Explorer immersive
headset for Windows Mixed Reality and Type-C to HDMI adapter.
10 Cover designs and color options may vary by
geography and may only be available in selected markets.
LENOVO and YOGA are trademarks of Lenovo. WINDOWS,
WINDOWS INK, WINDOWS HELLO and CORTANA are trademarks of Microsoft Corp. INTEL,
INTEL CORE and THUNDERBOLT are trademarks of Intel Corporation in the US and/or
other countries. STAR WARS and related properties are trademarks
and/or copyrights, in the United States and other countries, of Lucasfilm Ltd.
and/or its affiliates. © & TM Lucasfilm Ltd. GORILLA GLASS is a trademark of Corning Incorporated. All other
trademarks are the property of their respective owners. ©2017, Lenovo Group
Limited.