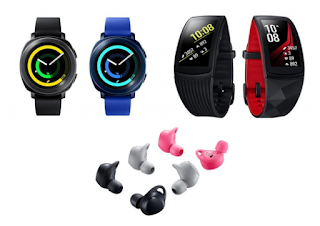 1  Not intended for use in
detection, diagnosis, treatment, monitoring or management of any medical
condition or disease. Any health-related information accessed through the
device(s) and/or application(s) should not be treated as medical advice. Users
should seek any medical advice from a physician.
2 Gear Sport and Gear Fit2 Pro
have ISO 22810:2010 certification for 5 ATM rating of 50 meters (165 feet)
under specific conditions. According to accredited test results, individual
results may vary. This means that both devices are safe to wear while walking
in the rain or showering, and may be used for shallow-water activities like
swimming in a pool or ocean. However, the Gear Sport and Gear Fit2 Pro should
not be used for scuba diving, waterskiing, or other activities involving
high-velocity water or submersion below shallow depth.
3 Use of Samsung Pay on Gear requires installation
of Samsung Gear app on compatible smartphone, and certain features may require
Bluetooth® connectivity to the smartphone and network connectivity of the
connected smartphone. Samsung Pay on Gear does not support all functionality
available on Samsung Pay for smartphones.
4Gear Sport is MIL-STD-810G certified. According
to accredited test results, individual results may vary.
5 The Gear IconX voice guide
supports nine languages including U.S. English, Chinese Mandarin, Spanish,
German, French, Korean, Italian, Russian and Japanese.
6 Actual user-accessible
internal storage is less than specified total memory due to operating system,
software, and other built-in applications, and may vary after software
updates/upgrades.
7The Gear IconX is compatible with devices
running Android 4.4 and above.
8 Based on Samsung’s internal
test results, and dependent on usage, battery conditions and other surrounding
factors and conditions.
9Limited to Samsung devices with Bixby voice
capabilities including Galaxy Note8, Galaxy S8 and Galaxy S8+
10 Availability almost anywhere
is based on compatibility of Samsung Pay on MST and/or NFC payment terminals,
with some supported for use only after software upgrades. Samsung Pay is
exclusive to selected Samsung Galaxy smartphones and smartwatches only, and
available across all participating payment networks, banks, and merchants.
Availability may vary, please check www.samsung.com/sg/samsungpay for updates.
11Do not use with infants, please consult a doctor
before use if you have epileptic or other medical conditions. Iris Scanner may
be unable to read your iris where view of your iris is impaired or the
appearance of your iris changes, including when you are wearing glasses or
coloured contact lenses.
12 Samsung Knox received the
most ‘Strong’ ratings of any mobile security platform in the report “Mobile
Device Security: A Comparison of Platforms” from Garter, Inc. The report,
published on April 6, 2016, compared the core of security features built into
twelve mobile device platforms as well as enterprise management capabilities.
Source of data: https://news.samsung.com/global/samsung-knox-receives-most-strong-ratings-of-anysecurity-platform-in-gartner-report-mobile-device-security-a-comparision-of-platforms.
13The survey of smartphone owners was conducted by
Edelman Intelligence July 21 – August 2, 2017 and included 757 interviews with
smartphone owners age 18 or older in Singapore.
14Limited to 1 redemption per visitor. Free gifts
are while stocks last and are not exchangeable for cash or other items.
15Contest terms &
conditions apply.
*All functionality, features,
specifications and other product information provided in this document
including, but not limited to, the benefits, design, pricing, components,
performance, availability, and capabilities of the product are subject to
change without notice or obligation.
Specifications are accurate
as at time of print and are subject to change without prior notice. Bluetooth®
is a registered trademark of Bluetooth SIG, Inc., and any use of such marks
herein is under license. Wi-Fi® and Wi-Fi Direct® are registered trademarks of
Wi-Fi Alliance. Android and other Google marks are trademarks of Google Inc.
iPhone is a trademark of Apple Inc, registered in the U.S. and other countries.
IOS is a trademark or registered trademark of Cisco in the U.S. and other
countries. All other company, product and service names mentioned herein are
marks, trademarks, registered trademarks or service marks of the respective
owners.
About
Samsung Pay
Samsung Pay, a mobile payment
service from Samsung Electronics, is simple, safe and available almost anywhere7 you can swipe or tap your
card. Combining NFC (Near Field Communication) with Samsung’s proprietary MST
(Magnetic Secure Transmission) technologies, Samsung Pay provides consumers a
way to pay almost anywhere you can swipe or tap a card at merchant locations.
Samsung continues to strategically expand
its partnership
ecosystem for Samsung Pay to provide greater flexibility, access, and choice
for customers while enabling an easy and safe payment experience.
About Samsung Electronics
Co., Ltd.
Samsung inspires
the world and shapes the future with transformative ideas and technologies. The
company is redefining the worlds of TVs, smartphones, wearable devices,
tablets, digital appliances, network systems, and memory, system LSI and LED
solutions. For the latest news, please visit the Samsung Newsroom at http://news.samsung.com.
APPENDIX A
Samsung Rewards Loyalty Programme Mechanics
Samsung
Pay users will get to earn rewards points for each transaction made on Samsung
Pay, with the total rewards points earned depending on their loyalty tier.
For
example, Bronze users can make 10 transactions to level up to the Silver tier,
where they can earn 20 rewards points per transaction after. They can then make
30 transactions to level up to the Gold tier, where they can earn 30 rewards
points per transaction after.
Note:
•       Rewards tier achieved in the current month will
continue to the following month
•       Number of transactions tracked will reset on the
first day of each month
•       Users can earn rewards points for up to 50
transactions per calendar month
•       Rewards points earned are valid for six calendar
months through to the last day of the month
•       Transactions made within five minutes of each
other will be considered as a single transaction

Huawei Partners with ICP to Hold the 2017 NEXT-IMAGE Awards