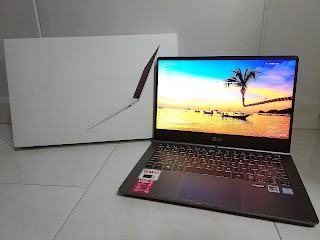 In today’s notebook market, manufacturers are coming with out different features and characteristics to make their devices stand out from the rest. These features allows each device to be differentiated from the competition, and thus, gives themselves identity and also value to consumers. However, since we are at a point where we are running out of ideas, and some of these new features simply does not make sense. Honestly speaking, who needs fancy RGB lighting on their notebook machines?
LG has really focused on features that truly matters so as to bring real value to the consumers. Riding on their Gram series’ success last year, LG has refreshed their notebook portfolio, and also included a new 13-inch device in this year’s lineup. Their Gram series still promises unprecedented portability, performance and usability.
When friends and family come to me for a recommendation for a new notebook, my first choice will always be the LG’s Gram series. I’m not paid to say that, but I genuinely feel that the LG Gram series of notebook really stands out from any other notebook in the market. If I was able to afford the LG Gram, I will definitely purchase a unit for myself as well. We have the LG Gram 13 notebook with us for review today, so read on to learn more on why it is my number one recommendation. 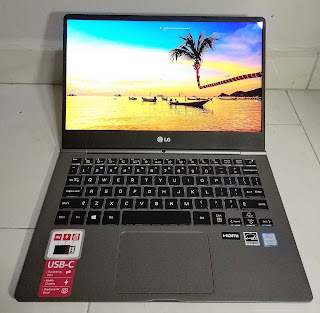 The Gram notebooks set themselves apart from any other notebook computers with its thin and lightweight design and premium features. It is a highly usable computer that has great specifications and performance to excels in productivity applications. Let’s take a closer look at every detail of the machine.

The display on the Gram 13 will capture the attention of anyone who comes across it. Its slim bezels sets the standard for displays of the future. In fact, manufacturers should all base their new notebook on such slim/almost bezel-less design. This new design seemingly makes any of today’s notebook computers obsolete. This unique detail from the LG Gram notebook series is already good enough to sway users into purchasing it.

As compared to a 13.3inch Zenbook from yesteryears, we can really see how much improvement in technology has been made just within a few years. Even though both devices have the same display size, the LG Gram 13 is dramatically lighter and smaller. The LG Gram 13 feels unreal, as no one could really have imagined that such a lightweight device is actually a fully working notebook computers. 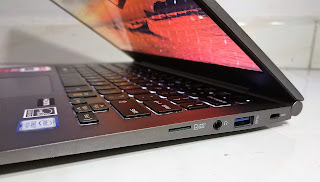 The LG Gram 13 also does not fall into the trap of the requiring dongles for I/O expandability. Minimally, the device comes with 3 x USB 3.1 ports (2 x Type-A and 1 x Type-C), a HDMI port, a headphone jack and a MicroSD card expansion slot. It somewhat adopts the storage expansion concept from smartphones, so that users can cheaply increase the storage space of the whole system with a MicroSD card. 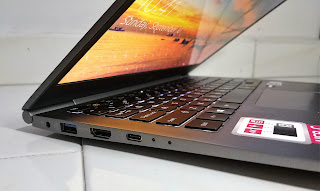 Users will also have the capabilities to hook the unit up to a 4K enabled display, as the built-in USB Type-C port also supports transmission of video signals (via DisplayPort over USB-C). Such expansion options set the LG Gram 13 apart from similar devices of the same category, such as the ASUS Zenbook 3 or the Macbook.
There is really nothing too much fanciful about the LG Gram series. The notebook comes with a very minimal, simple and classic design that focuses on providing high usability and good experience to users. In this year’s lineup, the Gram series will also be available in more colours for customers to choose from. 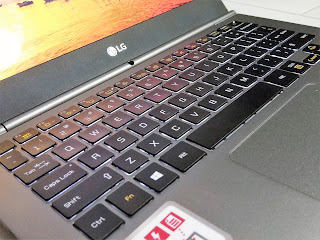 We believe that users will simply love the keyboard on the LG Gram 13. Even though the LG Gram 13 is physically smaller than the usual 13-inch notebooks, the LG still managed to fit a full size keyboard onto it. We did not require any sort of learning on the keyboard, as all the keys are at the place where they are supposed to be. It was simply a pleasure typing on the Gram 13. Oh yes. The keys on the LG Gram 13 are also individually backlit. This makes it great for typing in low-light conditions as well! 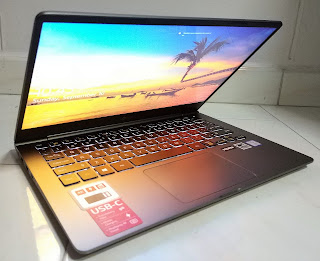 The track-pad on the LG Gram 13 supports multiple gestures for quick actions on the Operating System. With such feature, we were able to effectively control the operating system to achieve different objectives. However, we thought that the track-pad can be more responsive, as we could feel a very slight delay in our actions. It must be noted that this is negligible, as such a delay will not affect users in any way.

There were some flaws that is attributed to such a thin and slim design. Firstly, as the notebook have to be kept in a very thin and slim profile, it was difficult to integrate a powerful speaker system into it. As for the LG Gram 13, it only features 2 x 1W stereo speakers, which we found to be underwhelming. In fact, some smartphone’s speakers could have even performed better than the speakers on the LG Gram 13. Luckily, the LG Gram 13 has an integrated headphone jack to salvage itself from its poor audio specification. We were able to connect it to external speakers to achieve a better entertainment experience. 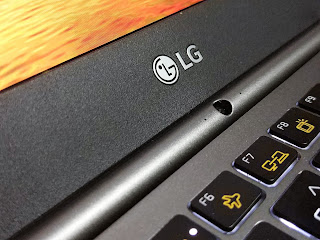 Secondly, due to the edge-to-edge display design on the LG Gram 13, LG had to put the webcam at a very awkward position. The webcam is located at the hinge of the notebook, and thus every image captured will appear to be angled from the bottom. This means that your video conference parties will likely to see your face from the bottom up (and perhaps see all the details of what’s in your nose). This can be very unnatural and somewhat unsightly as well. I would have preferred it if LG excluded the integrated webcam, and give users an external webcam instead.

LG has rated the the Gram series to have a double-digit battery life. This means that you could easily get a full day of usage on the Gram 13 without plugging it into the mains for charging! Based on our more practical tests, while continuously using the notebook for productivity applications (the article was written on the Gram 13), we estimated that the Gram 13 would be able to run for a good 7 hours before it shuts down due to a lack of battery. With the Gram 13, I can finally be confident to have my notebook with me without bringing the charging adapter! (Well, the charging adapter is not very big to begin with) 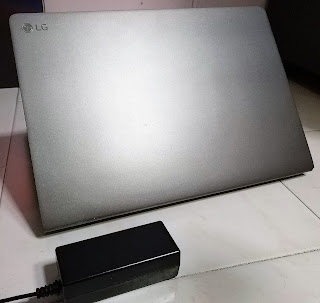 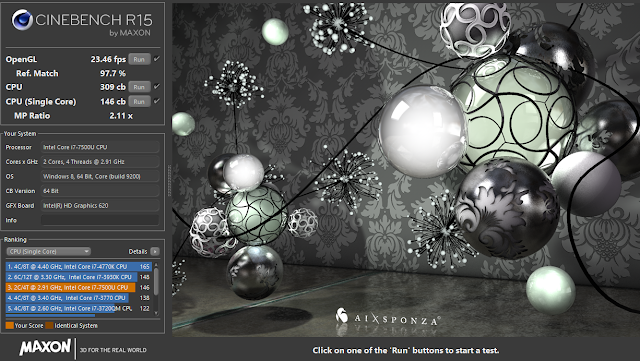 The LG Gram 13 comes with either a Core i5 or a Core i7 processor. For our review unit, we have the Core i7 7500U variant, which is a dual core processor that supports hyper threading. It runs at a base clock of 2.9GHz, and can be boosted up to 3.5GHz, depending on the resource requirements from applications. The Kaby Lake architecture from Intel enables the system to be extremely energy efficient, while not affecting performance too much. In terms of single core performance, the CPU was able to achieve a score of 146 points on CineBench R15. It is even comparable to the single core performance of the desktop class Intel Core i7 3770 CPU!

However, it seems that multi-threaded performance on this CPU is considerably poor. Upon further investigation, it seems that the LG Gram 13’s CPU performance is limited by the thermal design of the system. Thermal throttling kicks on when benchmarking on the Cinebench R15, and we were unable to reach the full potential of the i7 7500U, thus explaining the poor performance above.

When all cores are running at 100%, temperatures will go beyond 90 degrees Celsius. Thermal throttling will start to kick in, and frequencies will be capped at about 2.3 to 2.5GHz. This is much lower than the expected turbo boost of 3.5GHz. 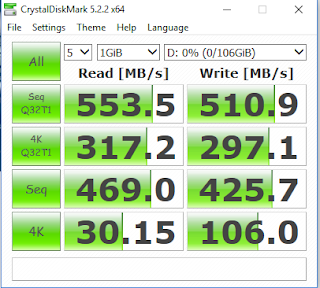 The LG Gram 13 comes built-in with a SSD that performs very well. It managed to achieve sequential read and write of above 510MB/s, which is considerably high for any AHCI/SATA based SSD. However, it must also be taken note that LG could have included a higher end NVMe based SSD for the system for an even better performance (beyond 2000MB/s). Judging that the LG Gram series is considered a premium device, we were expecting SSD of higher performance as well.

The LG Gram 13 is a unique notebook computer that is defined by its slim and light profile. It is a highly usable premium notebook with everything that you have ever wanted. However, it is bugged by a few jarring imperfections, such as its webcam placement and thermal design issues. Regardless, we will still recommend it to anyone who requires a highly portable notebook computer, as the LG Gram 13 excels in this area.If you are entices by the design of the LG Gram 13, and will be making your purchase, we recommend that you can purchase the more affordable Core i5 version instead, as there will be minimal performance difference as compared to the Core i7 version, due to the thermal limitations.

We are definitely looking forward for its next iteration of the LG Gram 13, where hopefully, these issues will be resolved and finally be worthy enough for our Editor’s Choice award.

Key Highlights of the STGCC | Fun For All