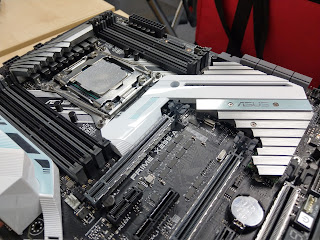 It has been almost two months since the announcement of the new Intel X299 platform and Kaby Lake-X and Skylake-X processors. Initially, there were confusion caused by the differences between these two types of processors, and the limitations of the Kaby Lake-X on the X299 platform. However, benchmarks on the new flagship Skylake-X processors still continues to show us that it has superior performance capabilities that is unparalleled to any other consumer based processors on the market.
This still gives a great reason for enthusiasts, gamers and prosumers to hop on to the new Skylake-X platform. The new 10 core and higher processors offers significant performance gains as compared to previous generation Broadwell-E processors. In order to fully enjoy the benefits of the new platform, the new processors have to be paired with a decent motherboard. In today’s article, we are going to take a look at the new ASUS PRIME X299-A motherboard. The PRIME X299-A is designed and targeted for those who cares less about over-the-top features, but still want a basic, reliable and decent motherboard.

What makes a good X299 Motherboard? 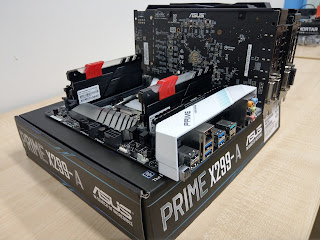 Famous overclocker der8auer stated that some motherboard has insufficient power delivery for the Skylake-X CPUs, as they only feature a single 8-pin connector. This could potentially affect the stability and overclocking headroom of the whole system. Therefore, it will be recommended that you should purchase a X299 motherboard that has at least a 8-pin and 4-pin power connector, especially if you are building the system with the power hungry Skylake-X CPU.
Even though the PRIME X299-A is considered as the most basic X299 motherboard from ASUS, it minimally has both a 8-pin and a 4-pin connectors. This design should deliver more than enough power to the CPU.
der8auer also mentioned about the temperature issues on the VRM heatsink, where the heatsink was unable to properly dissipate heat, causing the VRM to throttle. We will put this motherboard to the test in the later parts of the article and find out if this is true, if it should really matter to you.
The ASUS PRIME X299-A series is one of the most affordable X299 motherboard in the market. We do not expect too many features from this motherboard, but it should sufficient allow a good computing experience. First up, let’s take a look at the different areas and features available on the motherboard. 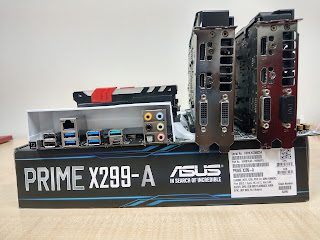 Onboard Features and I/O 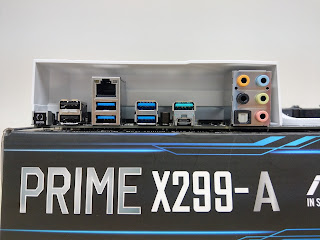 The I/O is not as expansive as other higher-end motherboards, but is sufficient for most users. As mentioned, the PRIME X299-A is a basic motherboard from ASUS’s X299 offering. The PRIME X299-A mainly features I/O ports that are only available directly from the X299 chipset, with the exception of the USB 3.1 Gen 2 ports which is enabled by a ASMedia 3142 Controller. With this chip, the motherboard supports the new USB 3.1 GEN2’s 10Gbps standard.
The motherboard has 8 x USB ports ( 4 x USB 3.0, 2 x USB 3.1 Gen 2 and 2 x USB 2.0), a Gigabit Ethernet port and 8 channel audio ports at the rear I/O. The number of USB ports can also be increased via the 2 x USB 3.0, 1 x USB 3.1 and 2 x USB 2.0 motherboard headers.
As the X299 based CPU does not feature any graphics processor on chip, no graphics ports are found on the motherboard. 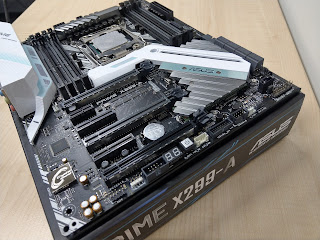 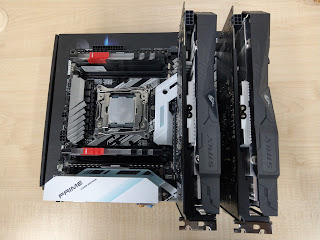 For further expansion, the X299-A also has another 1 x PCI-E x1 and 2 x PCI-E x4 slots. Oh yes, all PCI-E expansion slots are also fortified with metal, which is firmly anchored to the PCB for additional support. 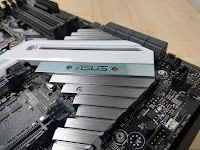 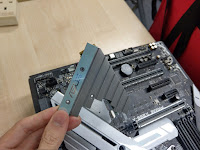 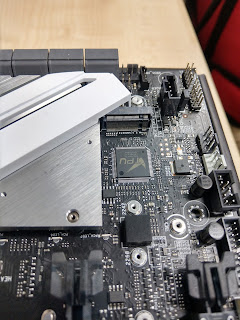 In terms of storage, the ASUS X299-A have 8 x SATA 6Gbps ports on board. It also has 2 more M.2 slots that supports PCI-E GEN3 X4 NVMe based SSDs. The M.2 slot is found under a removable heatsink at the bottom of the PCH, which supports both SATA and PCI-E based SSDs. This should be the primary slot to install your high performance SSD, as the heatsink will provide better thermal dissipation and prevent any sort of performance throttling to the SSD. The other M.2 slot is vertically oriented, and only supports PCIe based SSDs. Both slots support Intel Optane Memory solutions.
Of course, being an enthusiast grade motherboard, the X299-A is pumped with many fan connectors. This motherboard has a total of 7 fan connectors, and can power up to 10 fans with the help of an additional Fan Extension Card. In case you are wondering, the X299-A also has 2 x dedicated RGB headers to power your LED strips/hardware. These headers are also compatible with the ASUS AURA Sync software.

In order to ensure the proper delivery of stable power to the CPU for a reliable operation, the ASUS PRIME X299-A is equipped with a 8 phase digital power design. ASUS has also designed a dedicated 1+1 power phase for the DRAM. With such digital power design, they are able to ensure that fluctuations of power provisions to the different components on the motherboard will be kept to a minimum. Of course, with good power delivery also comes better overclocking headroom. We will see how far we can go with the PRIME X299-A at the later part of this article.
Crystal Sound 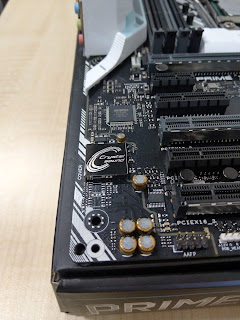 ASUS has integrated the Realtek S1220A on the PRIME X299-A motherboard. This audio processor promises pristine audio quality with great signal to noise ratio ratings for both line-in and stereo out interfaces. The circuit also have the capabilities to sense the impedance of connected headphones, and can customize amplification levels accordingly.
The whole audio circuitry is designed for the best possible audio experience. ASUS calls the suite of technologies “Crystal Sound 3”, which enhances the overall gaming audio performance and effects. 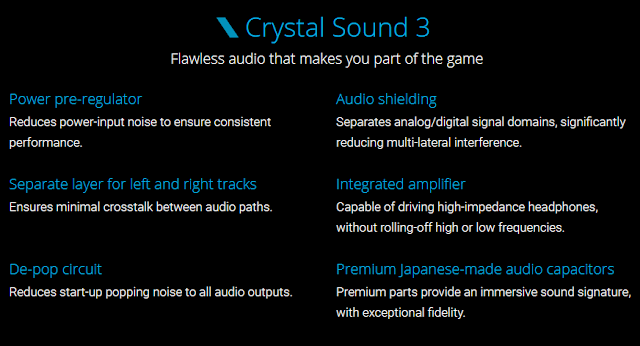 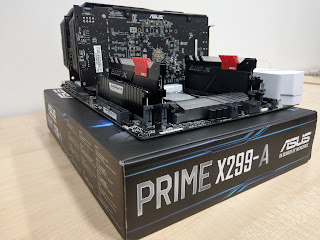 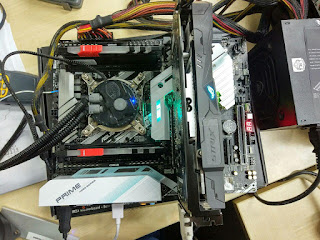 As we lack properly selected RAM kits for further memory overclocking, we left our RAM to run at 2600MHz for stability, in Quad Channel mode. We managed to push the processor to 4.3GHz across all the cores and was able to complete benchmarks in this configuration without any thermal, or VRM throttling.
However, while running stability and stress test with Prime95 on the setup, we saw cases of both VRM and thermal throttling by the CPU. Using a thermocouple, we measured about 85 degrees Celsius at its highest before VRM throttling kicked in. CPU thermal throttling kicked in when the CPU package reached above 100 degree Celsius, causing the clock speed to drop to 3.3GHz. VRM throttling only causes the CPU frequency drops slightly rather than drastically, as compared to CPU thermal throttling.
It seems that der8auer’s claims are true, as we faced similar situations like his setup. It is true that the motherboard’s VRM area can get rather hot and throttle the CPU. It seems like the 10 core monster requires a much better cooling solution for the VRM. However, we must also take note that we should not put the blame fully on the heatsink design. Perhaps, a better airflow through the VRM heatsink will give it a much improved heat dissipation performance. With good airflow throughout the setup, this problem can be mitigated, and possibly also solved.
Nonetheless, having the CPU to run at 4.3GHz on all cores is also considerably high. This should be your overclocking headroom for pushing the system to its limits, before thermal issues occurs. In the long run, it would probably make more sense to have the system run at a lower 4.1GHz for better stability.
We took temperature readings from the CPU, VRM, and chipset heatsink. We used HWMonitor to get the CPU package temperature for the CPU, a physical thermocouple below the VRM heasink for VRM temperatures and an infrared thermometer for the heatsink readings. Idle readings are taken when the system is idling on the main Windows Desktop screen after a fresh startup. The load temperatures are taken when we were 4 minutes into Prime95 Small FTT tests. 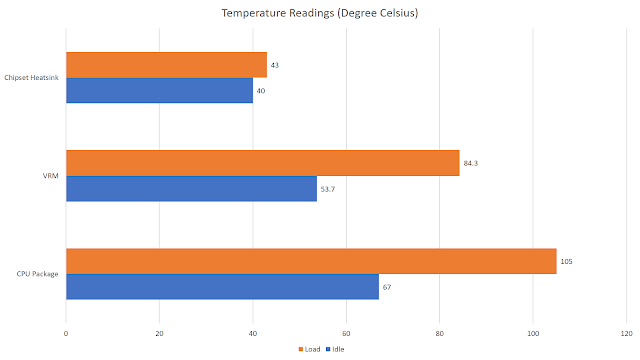 Despite thermal throttling, we were still able to push the processor to 4.5GHz for a run of Cinebench R15 benchmark. This truly shows the overclocking capabilities of this motherboard, if the setup was not limited by heat issues. If proper cooling was introduced to the setup, we were certain that the CPU will be able to go even higher to reach better clocks. 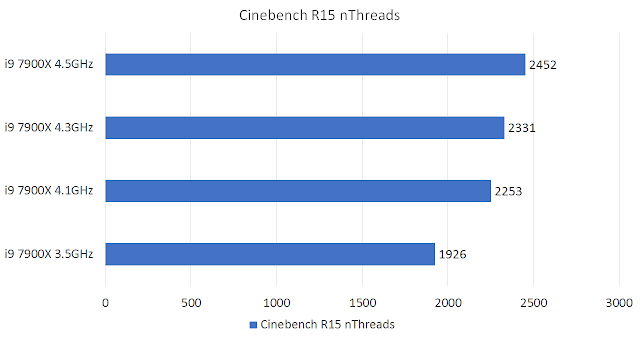 No doubt, the new X299 platform from Intel brings a whole new level of performance to prosumers. These 10 core and higher chips redefines the definition of performance on a single CPU. The ASUS PRIME X299-A was able to properly support the beast of the new Intel Skylake-X CPU, and provide a reliable and stable system at stock settings. However, when overclocking comes into play, we saw instances of motherboard VRM throttling that limited the full potential of the 10 core CPU.
The ASUS PRIME X299-A brings the X299 experience to the table. It will work extremely well for the lower end Kaby Lake X series. However, if you are looking into overclocking your system and use it for computationally intensive tasks such as video encoding, it would be recommended to purchase a higher end motherboard with better cooling capabilities.
For the LATEST tech updates,
FOLLOW us on our Twitter
LIKE us on our FaceBook
SUBSCRIBE to us on our YouTube Channel!