Huawei Brings Its ‘Honor’ Line of Phones Exclusively to Lazada Singapore
The Honor 8 Pro will be available from 31
August, 12pm 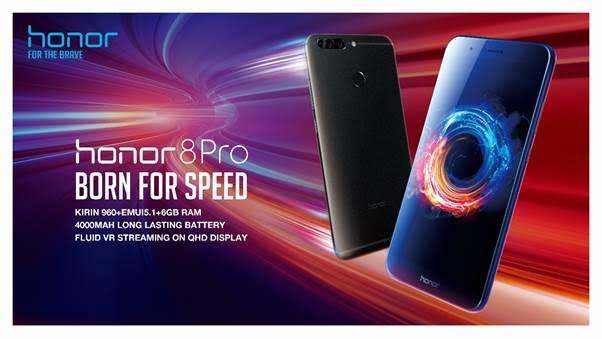 28 AUGUST 2017, SINGAPORE – While Huawei has grown to
be a formidable player in the smartphone market, few know about its sub-brand,
Honor, which has proved popular among millennials in China & Western
Europe. It is known among its fans for producing affordable, mid-range phones,
and come 31 August, it will finally be coming to Singapore’s shores with the
Honor 8 Pro!
The Honor 8 Pro launches exclusively on Lazada
Singapore on 31 August at 12pm and will be available in two
colours, Midnight Black and Navy Blue. As a launch promotion, it will
come with a free View Cover Casing (worth S$46), while stocks last.
Priced at S$599, the Honor 8 Pro offers flagship
specifications like the latest Octa-core Kirin 960 CPU, Quad HD display, and
sports a 12-megapixel dual-lens rear camera setup capable of recording in 4K
UHD. It also has a high-density 4000 mAh battery that will take you through 2
full days with regular use, or 1.44 days with heavy use, based on Honor’s own
testing.
Handsets ordered on Lazada will also come with 1 year
official warranty, and can be fulfilled at the Huawei Service Centre at:
313@Somerset
313 Orchard #B2-12/13
Singapore 238895
Opening Hours:
11am – 8pm (Mon – Sun)
Closed on Public Holidays