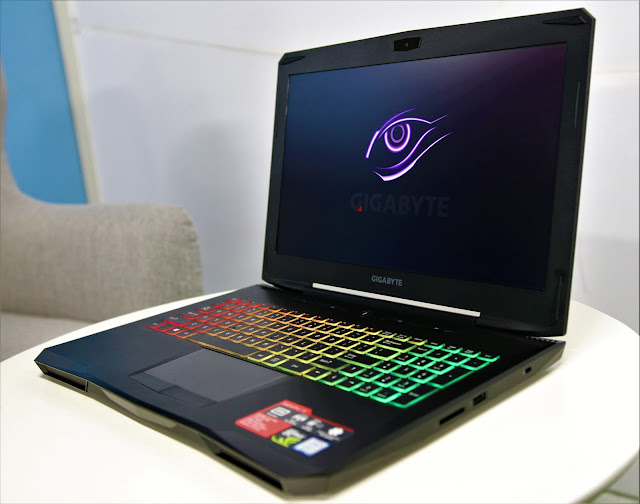 When it comes to a well-rounded gaming experience, GIGABYTE’s SabrePro 15 is second to none. It features an Intel i7-7700HQ and a GTX 1060 6GB for gaming performance, a 2.0mm travel scissor-type keyboard, and a ridiculous variety of I/O ports. Not to mention, it even has a SSD!

However, the gaming experience is not all about technical specifications. It is the amalgamation of all the little things that puts the SabrePro 15 on the pedestal. Let us take a deeper look on how it provides a gaming experience that is just right. 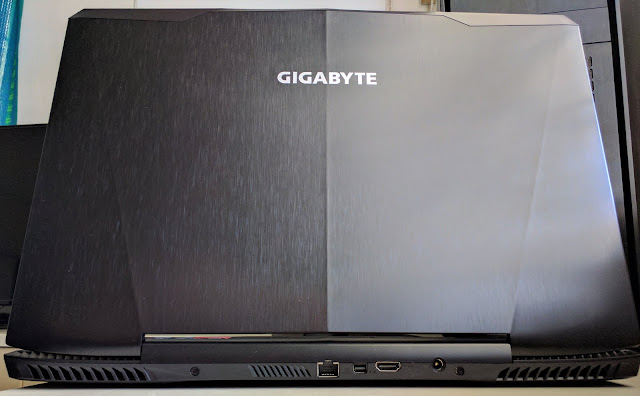 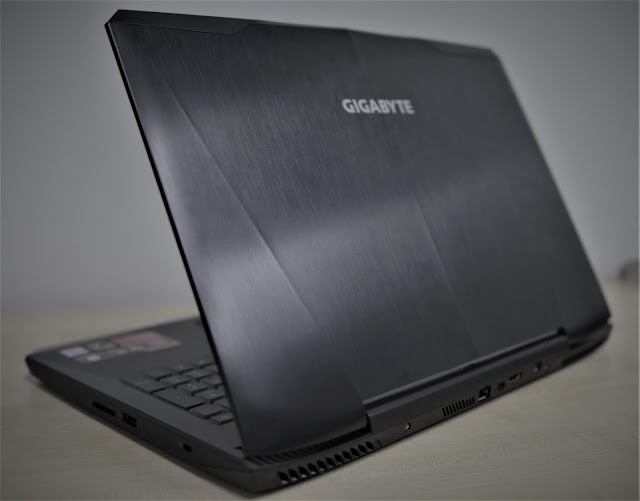 The SabrePro 15 comes with a brushed aluminium finish on top of its sleek yet sharp contours, causing it to give off a futuristic vibe. Not to mention, the choice of the matte finish around the keyboard ensures that oily smudges are a thing of the past.

SabrePro 15 comes with a 15.6″ Full HD 1920×1080 LCD monitor with a standard refresh rate of 60Hz. It also has a IPS WVA anti-glare display with a wide viewing angle of 178°, allowing you to share glorious gaming experiences with your friends. However, its 72% NTSC color gamut makes it not suitable when it comes to professional content creation

If 1080P is not sufficient for your gaming needs, SabrePro includes a Mini DisplayPort which gives you the choice to hook it up another monitor! It even supports a resolution of up to 3840×2160 at 60Hz, this means Ultra HD 4K!

Nowadays, it is commonplace to see modern laptops to have only a few I/O ports, forcing consumers to spend on pricey dongles. However, SabrePro 15’s vast array of I/O ports would leave even the most dongle-loving maniac jealous. It comes with 4 USB ports, 3 of which are 3.0 and even comes with a USB 3.1 Type-C port!
Ever been to a presentation and forgot to being your adapter for your mini-HDMI port?
*Curse you, laptop manufacturers for skimping out on a single yet crucial port!*
That would never happen with the SabrePro 15. It has a full-sized HDMI port and even an Ethernet port! Say goodbye to lag! All these I/O ports, including the Mini DisplayPort, gives the user a leg up in terms of flexibility as compared to most other modern laptops. It also removes the need to buy expensive dongles, and leave a big hole in your wallet.

Keyboard (Need Some RGB In Your Life?) 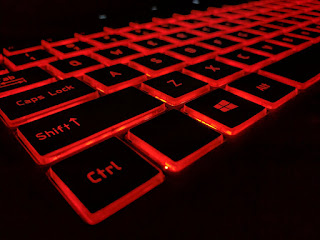 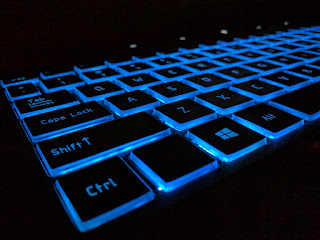 The keyboard has a nice tactile feel to it, with its 2.0mm travel scissor-type keys. The actuation force is just right, allowing you to rest your hands without accidentally pressing onto the keys. Typing on it is actually comparable with the Cherry MX Brown switches.
GIGABYTE somehow also managed to fit a full-sized keyboard layout, including the arrow keys and number pad, into the SabrePro 15 while keeping it compact. However, this design choice does come with some minor inconveniences. For one, your arms will be slanted to the left while typing, which can become uncomfortable in long typing scenarios. Not to mention, the awkward placement of its arrow keys can cause some accidental keypresses. Thankfully, these issues are trivial and just require some time to of getting used to its layout. 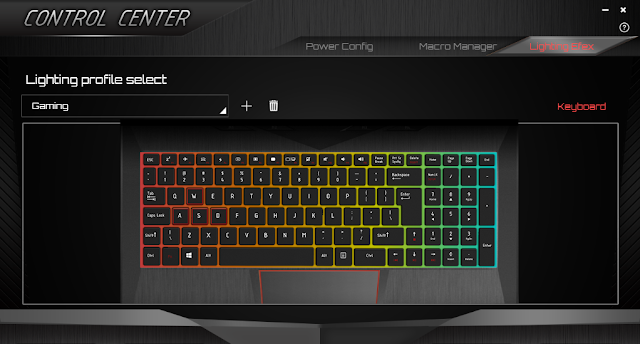 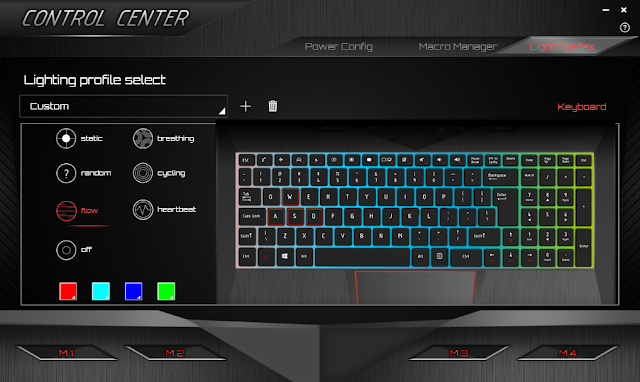 Nothing says ‘Gaming’ more than RGB! SabrePro 15’s RGB backlight keyboard supports up to 16.8 million colors to provide a premium backlit keyboard experience. GIGABYTE also included a Control Center which allows you to customize your very own RGB color scheme of your keyboard. 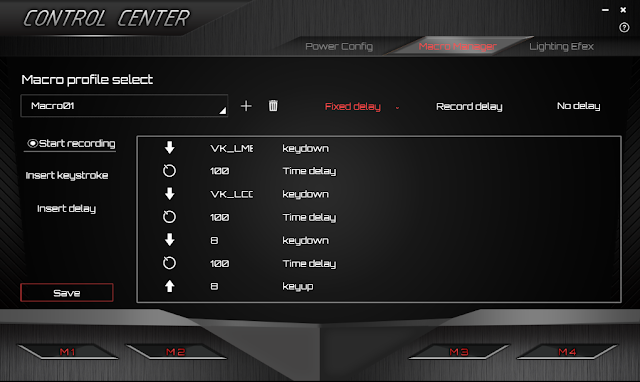 Want to quickly switch your RGB color profile to something that fits the mood? Want to automate several activities and pretend that your laptop has a mind of its own? Now you can! GIGABYTE’s Control Center allows you to create customized macros and actions for each individual M key. Its macro key placements not only fit the its futuristic theme, it is also comfortably just out of the way so as to not get in the way while typing.

The tactile experience together with the convenient position of the macro buttons makes gaming on the SabrePro 15 immensely satisfying. 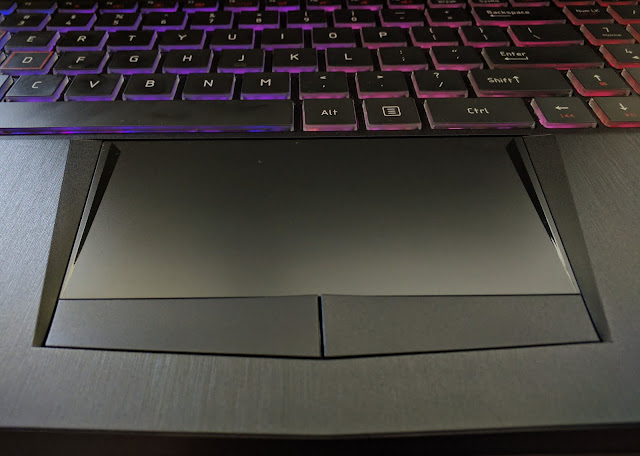 One of the most fascinating feature of the SabrePro 15 is its really responsive touchpad. It is at a whole new level when it comes to the maneuverability and precise control of the cursor. Also at times, it can be preferred to over a mouse. Additionally, it has an amazing automatic palm rejection which removes the need to disable the touchpad when typing.

When it comes to build quality, SabrePro 15 performs modestly. Although the monitor does flex a little, its chassis feels extremely sturdy. Not to mention, its relatively frictionless hinge and weight distribution makes using it on the laptop comfortable. Not to mention, opening the laptop is relatively simple with a single hand.
.embed-container { position: relative; padding-bottom: 56.25%; height: 0; overflow: hidden; max-width: 100%; } .embed-container iframe, .embed-container object, .embed-container embed { position: absolute; top: 0; left: 0; width: 100%; height: 100%; }
The SabrePro 15’s keyboard is a step up compared to its predecessor, the Sabre 15, as its keys are firmly tucked underneath its chassis. As a result, the keyboard is a lot more stable and does not ‘sink’ when being typed on like the Sabre 15.

GIGABYTE’s focus for this laptop is in its gaming prowess. That is evident in its passable webcam, but at least it does the job decently. Its microphone does record voices clearly enough, albeit with some echo added to the mix. 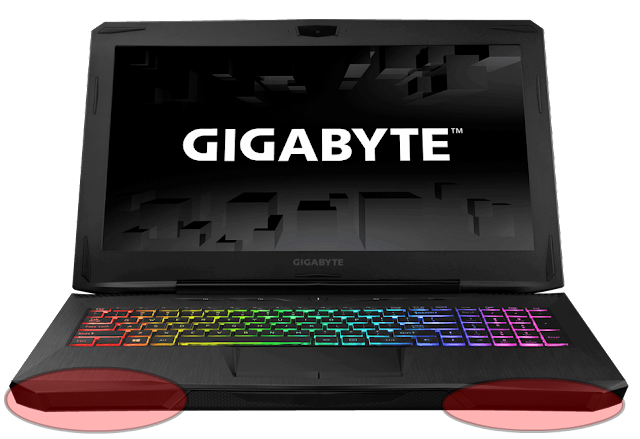 The main speakers are strategically placed facing the front, towards the user. Together with its subwoofer at the rear, it helps to simulate a surround sound playback of your games or movies. This ideal placement allows the laptop to focus the audio experience on the user.

When it comes to sound quality, it is modestly loud and accomplishes what it needs to do, while reproducing audio better than most other laptops. However, it there is a slight distortion when something loud such as an explosion happens at max volume. It should be noted that this is common for most laptop speakers.

When it comes to Intel’s 7th gen Core i7-7700HQ processor, not any task is able to bring it to its knees. Being able to boost up to 3.8GHz, while in a laptop form factor, is nothing to scoff at. Not to mention, it boasts a 13% better productivity than its previous generation processor. 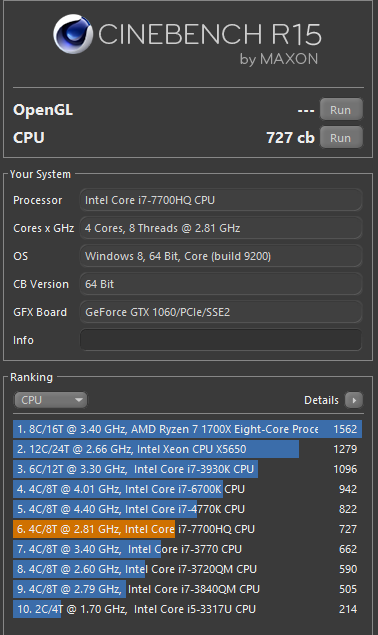 As seen in its Cinebench score, it actually does nearly as well as its desktop brothers while at a significantly lower clock. This is all thanks to its improved efficiency and IPC (Instructions Per Clock).
AIDA64 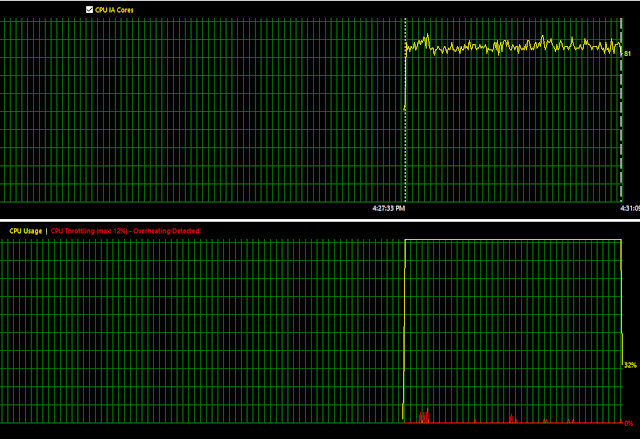 To push the CPU to its limits, AIDA64 was used to test out how effective the laptop’s cooling system is. As shown below, it was discovered that the CPU only throttled up to 12% while keeping the temperatures below 85°C. It should be noted that the CPU throttled only in short burst during the benchmark, and it was for the most part running at max clock speeds.

SabrePro 15 also includes the Nvidia’s GTX 1060 with 6GB of GDDR5 VRAM. This card is powerful enough to make gaming on 1080P like a breeze.

As shown above, the laptop performed respectably well and scored over 3500 in the Time Spy DirectX 12 benchmark of 3DMark. However, synthetic benchmarks can only say so much. Thus, let us finally look at gaming performance! 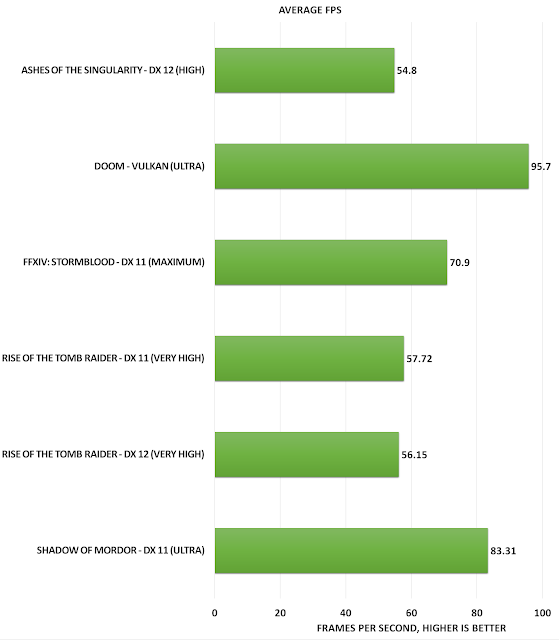 When it comes to gaming, the SabrePro 15 does not disappoint. It performs close at least 60 FPS while at the highest preset of each game running at 1080P (with the exception of Ashes of the Singularity). This goes to show its ability to handle even the most demanding modern games.

SabrePro 15 is no exception when it comes to noisy fans. It is to be expected as it is packing powerful components into a small chassis. Moreover, playing demanding games brings any PC in such a slim chassis to its knees. This is evident with the fan ramping up and getting noticeably louder, while gaming or performing any computationally intensive work. However, for most work-related tasks such as typing up a document or browsing the web, it stays relatively quiet.
The fans, though noisy at times, does do a great job in keeping the laptop cool. The chassis merely gets warm to the touch during even the most intensive gaming sessions. This is all thanks to its the 5 Copper Heat Pipes in addition to its Dual Fans that directs the heat far away from its user. This results in uninterrupted gaming, as there is no need to let the laptop take a break!

No gaming PC is whole without fast storage. The SabrePro 15 model that we are reviewing came with a Samsung M.2 NVMe 256GB SSD and a 2TB HDD for additional storage. It can also support up to an additional M.2 SATA3 SSD for double the fast storage.
The below results are after installing several applications and games, leaving only 70GB of space available in the SSD. The graph compares between the ideal performance of the SSD with a fresh install, and the simulated performance of several months of usage with the SSD nearly full.
Crystal Disk Mark Benchmark 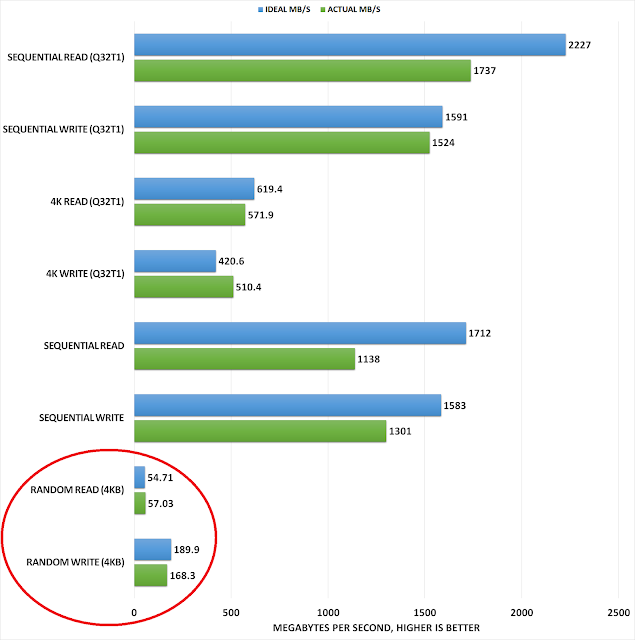 As shown above, there are some noticeable differences in speeds in the sequential reads. However, the random reads and writes are mostly not affected and are running at significant speeds. The random I/Os are the numbers to look out for as most games often perform random I/Os to the storage, causing hiccups and stutters when using a slower HDD. However, even when the SSD is almost full, it is performing just as well as brand new!

Battery is not hot-swappable, like most modern laptops. Also, to test out how long the 5300WAh 60Wh battery lasts on a typical work scenario, PCMark 8 was used to simulate a normal work day’s activities. 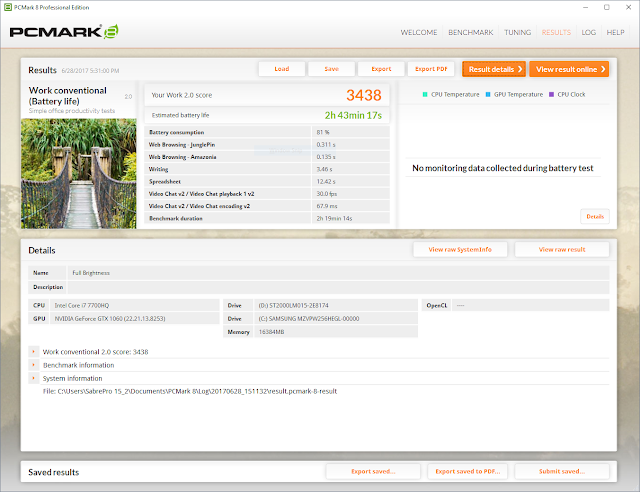 Because of these reasons, we decided to award GIGABYTE’s SabrePro 15 with our very own All-Rounder Award for its well-rounded gaming experience. 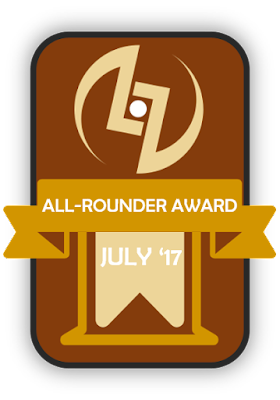 SabrePro 15 is thinner and lighter than many bulky gaming laptops while performing on par or better. It even includes a SSD which is sorely missing in many other gaming laptops of the same caliber. The subtle features such as the superb keyboard and touchpad, forward facing speakers, and the absurd number I/O ports available makes gaming on this beast incredibly well-rounded. If you are looking for a no-frills gaming laptop that pulls its own weight, look no further as the SabrePro 15 is definitely for you.

BMC Empowers the Future of Work with BMC Digital Workplace